As the market narrative shifted its focus from rising bond yields to the reopening of the reflating US economy—fueled by US President Joseph Biden’s $1.9 trillion stimulus—futures on the the , , and traded higher on Wednesday.

Contracts on the Russell 2000 were nearly double those on the NASDAQ this morning. At the same time, yields jumped, showing once again the power of the reflation trade: the expectation that rising inflation—for the first time in 12 years—will drive the economic expansion, rather than slow it down.

Investors have been going back and forth between two themes for the past few weeks. Equities were sold-off in the last two weeks on the outlook that rising rates will upend an economic recovery, while in the two weeks that preceded those, stocks gained on the view that inflation will create a virtuous cycle of rising prices, benefiting companies, which then create more and better paying jobs, which benefits consumers, who spend more, benefiting companies, and so on. 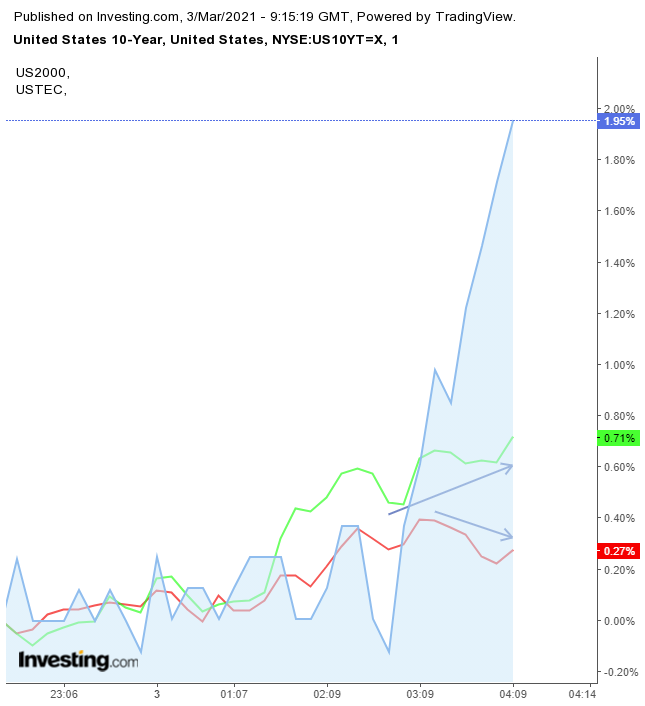 In the minute-by-minute chart above, we can see how contracts on US domestic firms (green) took off along with rising yields on the Treasury note (blue), while those on the (red) floundered.

In Europe, the index also climbed, boosted by the UK’s , which was outperforming in the region, as the Chancellor of the Exchequer, Rishi Sunak extended furlough pay—80% of wages for workers in the program—through the end of June, ahead of presenting England’s later today.

Earlier Wednesday, Asia was painted green, as Australia’s grew by 3.1%, faster than the expected 2.5% rise. This read gave the land down under relief as it is seen to support a V-shape recovery.

The market narrative is using Australia’s rapid recovery as a poster child, creating expectations for the same in economies around the world. The market will almost certainly oscillate, flipping between the themes of growth as a result of rising yields or a slowdown as a result of higher yields. That’s because global economies remain delicate after an array of stalled potential recoveries last year amid the worst public health crisis in a lifetime

Still, it wasn’t Australia’s that outperformed in Asia. Its shares provided a temperate 0.8% gain. It was China, where the closed 1.95% higher despite the announcement that its grew at the slowest rate in 10 months, slipping to 51.5, just above the 50-mark level. The index was likely boosted by the country’s top banking regulator Guo Shuqing, backpedaling from yesterday’s warning of “bubble risks” in markets, saying that China’s regulations would not get in the way of an economic recovery.

South Korea’s was the second best performer, up 1.3%, thanks to massive institutional buying late in the session, after China’s attempt to soothe investors and avoid the market meltdown that the regulator himself had warned against.

US stocks sold off in Tuesday’s session, after the strongest advance in nine months on Monday played on investors fears of a bubble.

Those fears were compounded by Bank of America warning that over-optimism is a strong contrarian indicator. The two most sensitive indexes, the and the NASDAQ 100, fell the most, around 1.7% each, more than double that of the ‘s 0.8 % decline and almost four times the 0.4% retreat by the .

Technology shares led the S&P and NASDAQ decliners, with Apple (NASDAQ:) down 2.1% 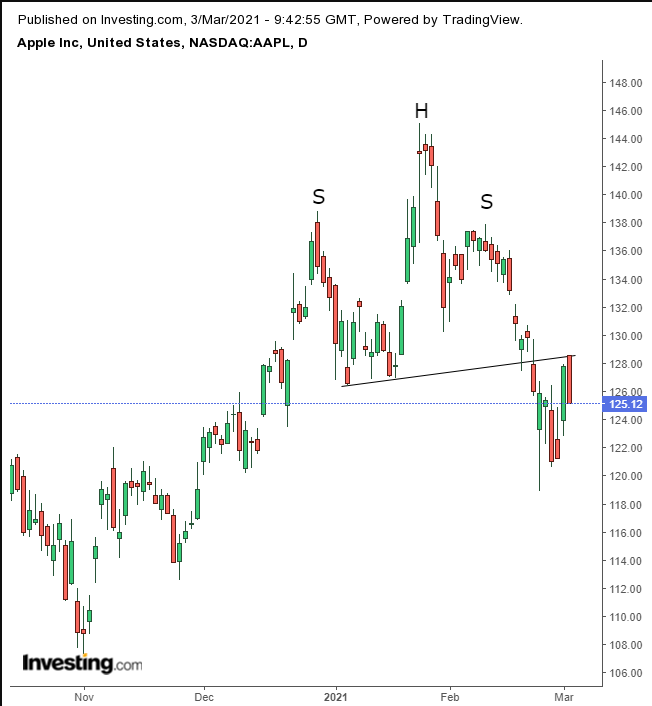 The iPhone maker’s stock sold off after the price approached the neckline of a H&S top. 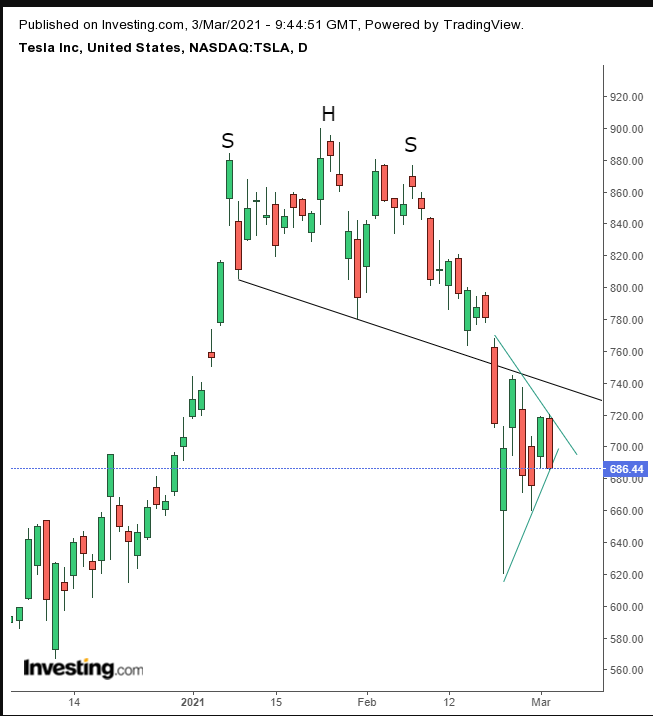 The EV manufacturer’s stock tested the range top following a downside breakout of a H&S top in the form of a pennant, a continuation pattern.

Budget retailer, Target (NYSE:) plunged 6.8%, on soft profit guidance, The slump pushed the price below its uptrend line since the April low, and established a descending series of peaks and troughs, the marks of a downtrend.

In other stock news, Rocket Companies (NYSE:), a Detroit-based mortgage provider, is the newest lightening rod for Reddit ‘Rebels,’ after they found out about its high level of short-interest. 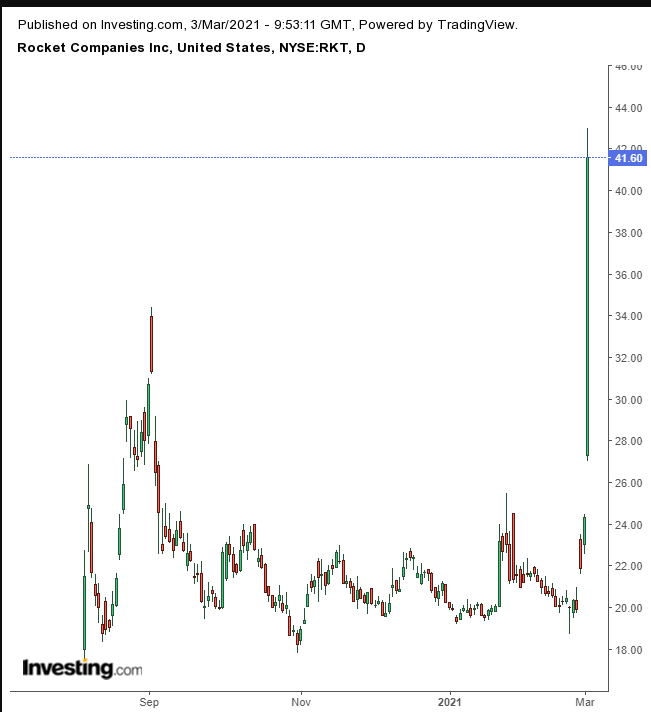 The stock surged over 70%, mirroring the kind of moves seen when GameStop (NYSE:) was their focus.

fell despite the fact that the weakened for the second day, but jumped back above $51,000.

recovered after a three-day fall. 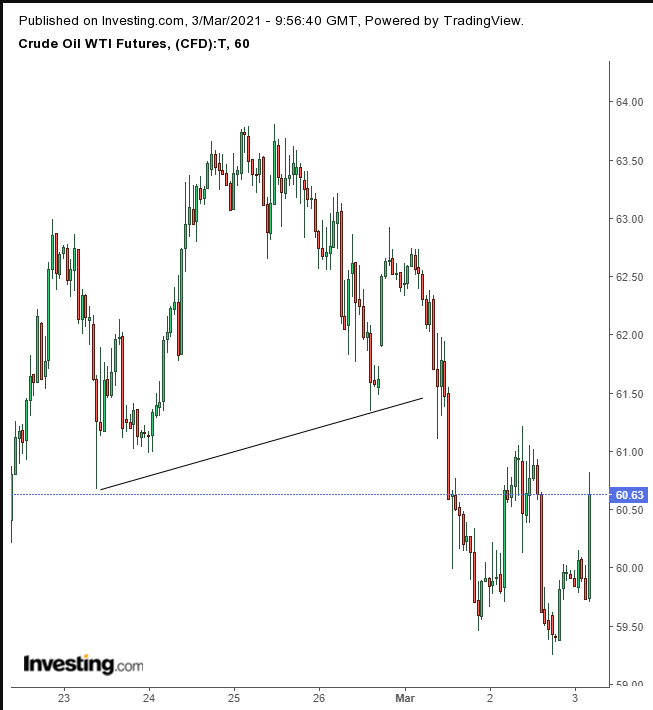 In our interpretation, the recovery is a return move after completing a H&S top.