European stocks as well as futures for the , and followed Asian shares into red territory this morning, pressured by heightened risks that the liquidity crunch in emerging market assets could spill over into other markets, at a time when investor sentiment is already burdened by ongoing trade war worries. 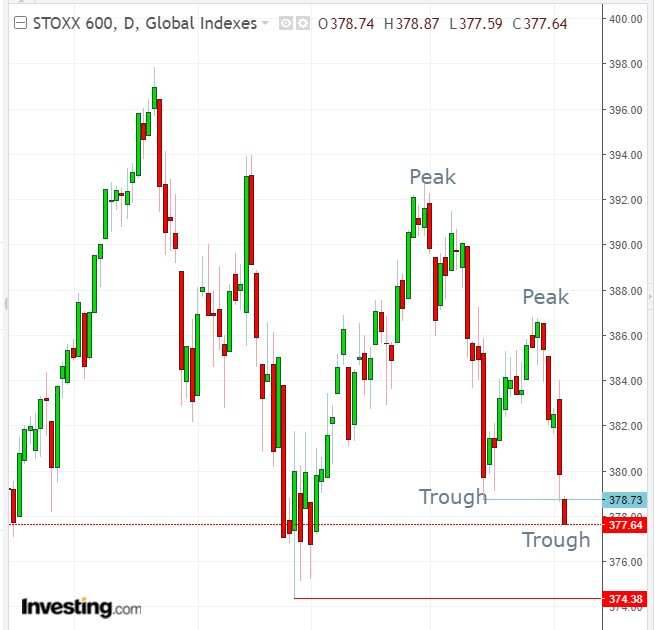 The pan-European opened almost 0.3 percent lower than yesterday’s close and later extended its drop to the lowest levels in two months, with miners and automakers leading the decline.

Technically, the price formed a second trough, beneath the August 15 low, forming a downtrend since August. The next test to confirm a downtrend since the May peak of under 398 is the 374 level—the late-June trough.

During the Asian session, regional indices were particularly sensitive to the EM turmoil. Hong Kong’s underperformed its peers, tumbling 2.61 percent, as investors priced in expectations for an additional round of US tariffs on $200 billion worth of Chinese imports, which would come as a tough blow China’s already weakened economy. Smartphone component maker Sunny Optical Technology Group (HK:) took a 6.39 plunge and tech giant Tencent Holdings (HK:) fell 4.16 percent, weighing on the index.

Mainland shares on the dropped an aggregate 1.68 percent. Japan’s outperformed, giving up a more manageable 0.77 percent despite the emergency weather conditions caused by Typhoon Jebi, which is expected to hit tourism, one of Japan’s key economic drivers.

One possible explanation for this outperformance irrespective of the natural disaster is the weakening , which would boost overseas sales—a crucial contributor to Japan’s export-reliant economy. While the yen only posted gains today, it has been strengthening since mid-July, offsetting the short-term negative impact of the worsening weather backdrop on the domestic financial market.

The selloffs seen across global markets today tracked significant price drops during yesterday’s US session. US equities started September on the back foot, after Nike (NYSE:) and Facebook (NASDAQ:) were both hit by widespread selling—the former on an ad campaign faux pas that had strong political overtones, the latter on a share downgrade by analysts at MoffettNathanson, who expect lower profits for the social media behemoth due to heavier regulations. 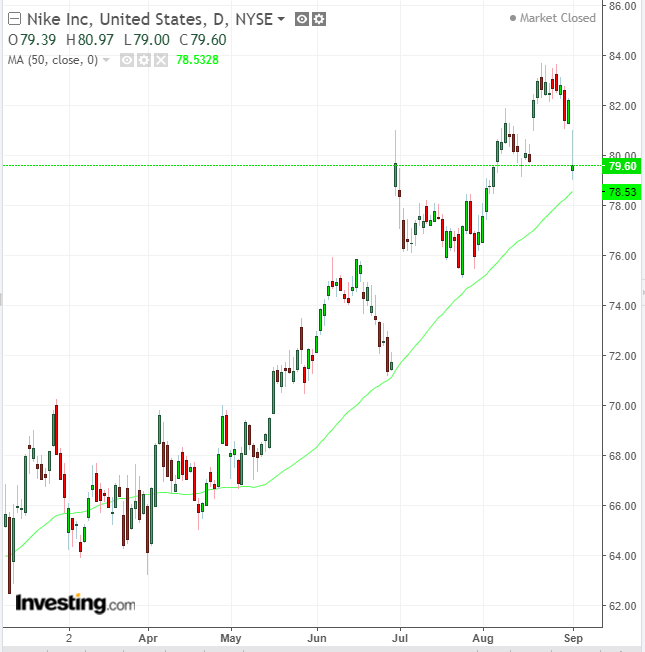 Technically, despite the social outrage sparked by the sportswear heavyweight’s new commercial, which features ex-NFL quarterback Colin Kaepernick—the first NFL player to kneel during the national anthem in 2016 in a sign of protest against racial injustice—the stock found support, bouncing off its lows, above the 50 DMA, which has marked the uptrend line since May. For contrarian traders in search of devalued stocks, this provides a higher probability trade to challenge the $84, August record.

In other corporate updates, Ford (NYSE:) was the only major automaker to crush sales expectations and Amazon.com (NASDAQ:) crossed the psychological $1 trillion market cap market, which helped prop up consumer stocks.

The was little changed, retreating 0.05 percent. The lost a tiny 0.17 percent. The tech-heavy dropped 0.23 percent. Small cap stocks on the ticked 0.45 percent lower.

The surprising outperformance of mega-cap companies listed on the Dow versus domestic stocks listed on the Russell suggests Tuesday’s selloff wasn’t driven by lingering US-China trade tensions. Rather, it signals escalating emerging market headwinds driving investors back into the safety of the US dollar, 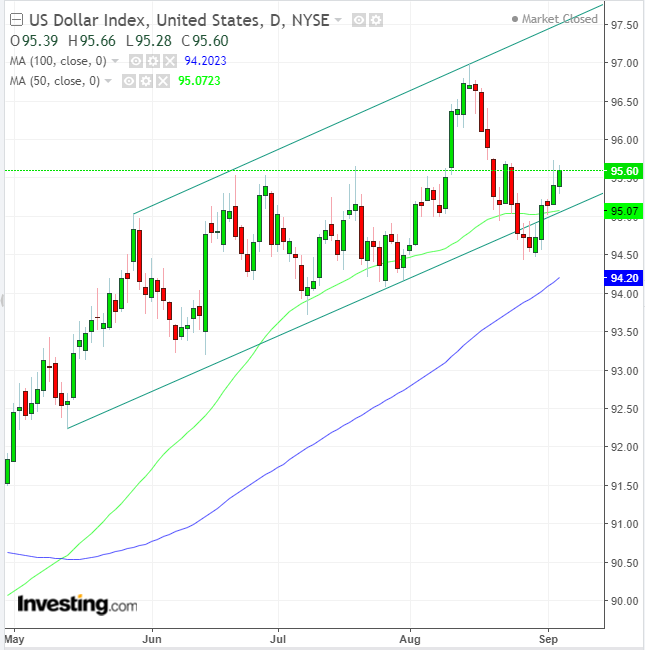 Indeed, analysts are pointing out that ‘s upward trajectory is the critical component underpinning the mounting events currently roiling the EM crisis, which could ignite a global contagion. The USD is up almost a quarter percent today, for the fourth session out of five.

While the dollar’s renewed safe haven status has been talked about since March, amid worsening US-China relations, its innate correlation with economic data should not be overlooked. Strong consumer spending, rising inflation and a tightening job market—all supportive of further Fed —are also supportive of a stronger greenback.

At this stage it’s becoming increasingly difficult to determine which is the cause and which the effect: is the dollar strength driving investments out of EM assets or is the risk in markets of developing nations steering investors towards the greenback?

Technically, the dollar is trading within a rising channel, having found support above the 100 DMA (blue), crossing above the 50 DMA (green), with a trajectory to challange the 97.00, August 15 peak.

Based on upbeat economic data, the buck is likely to continue to strengthen, and therefore increase EM turmoil. The question is whether major market players will learn to discount this factor or whether it will continue to weigh down on sentiment.

In an interesting development, since it generally moves opposite to the dollar, edged higher as well, though it’s been falling sharply since April. 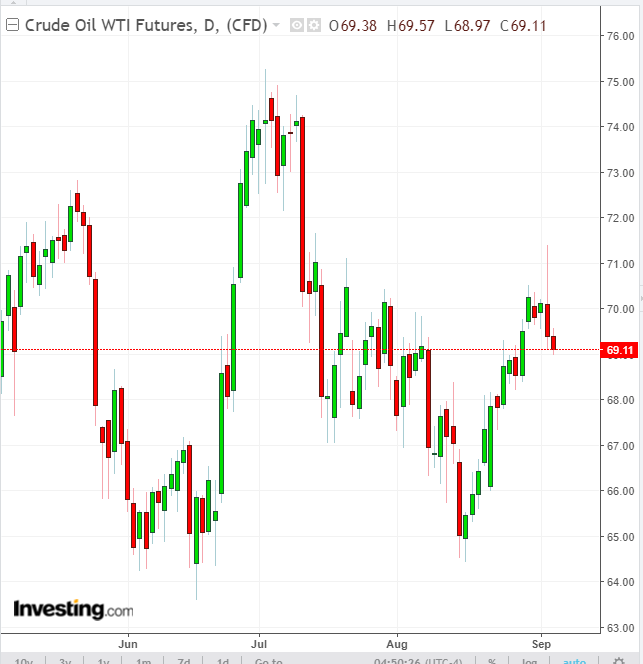 crude is slipping lower, weighed by the stronger USD and expectations for to increase to 600,000 barrels.