Global stocks took their cue from U.S. gains this morning, as investors bet on central banks around the world—first and foremost, the Fed—to follow Chinese policymakers in signaling support to the economy this week, amid recurring fears of a recession after one of the strongest economic expansions on record. 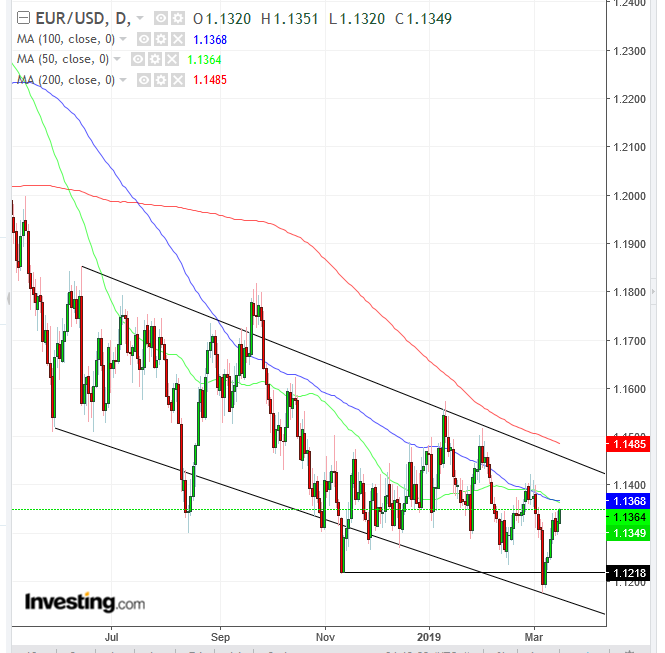 A weak euro, nearing a 21-month low and averaging 1.16 against the dollar over the past year, provides a tailwind to European exports within the most sensitive global trade backdrop in a generation. The March low carved out another trough in the downtrend, increasing the potential for an even weaker single currency. However, the euro bounced back by the late European morning, to seal some upbeat gains. 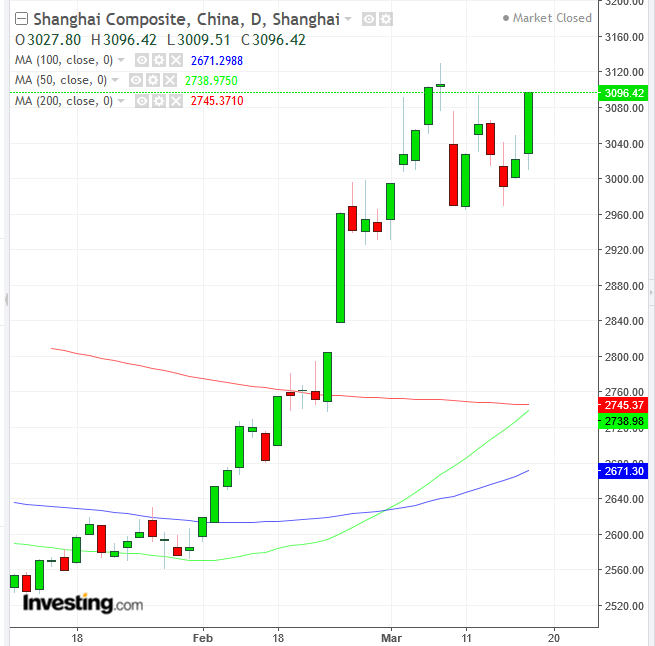 The Chinese benchmark surged the most in three weeks to 2.47% on hopes that persistent, aggressive fiscal stimulus would kickstart the country’s contracting economy. While the price closed at the very highest point of the session, it remained below the March 7 close—the highest since June 7. That level may be a catalyst for either an acceleration of the rally or a correction, as the 50 DMA reached the bottom of the 200 DMA, after already crossing over the 100 DMA.

Honk Kong’s closed 1.37% higher after experiencing some fluctuations. Technically, the 50 DMA already crossed over the 200 DMA, triggering a so-called “golden cross”, as traders expect prices to continue higher. The buy signal coincided with an upside breakout of a congestion since Feb. 25, reinforcing its bullishness.

Japan’s climbed 0.62% to the highest level in almost two weeks, extending a rebound from the bottom of an ascending channel.

As to U.S. futures, the picture was more nuanced. Futures on the NASDAQ 100managed to hold onto positive territory, while those on the wavered after rebounding from an initial dip and contracts on the remained in the red. One could have expected it would be easy for traders to bid up stocks after the S&P 500capped its tenth weekly gain out of twelve on Friday and the strengthened its bull market, sealing an 21.4% gain since the Christmas-even bottom. 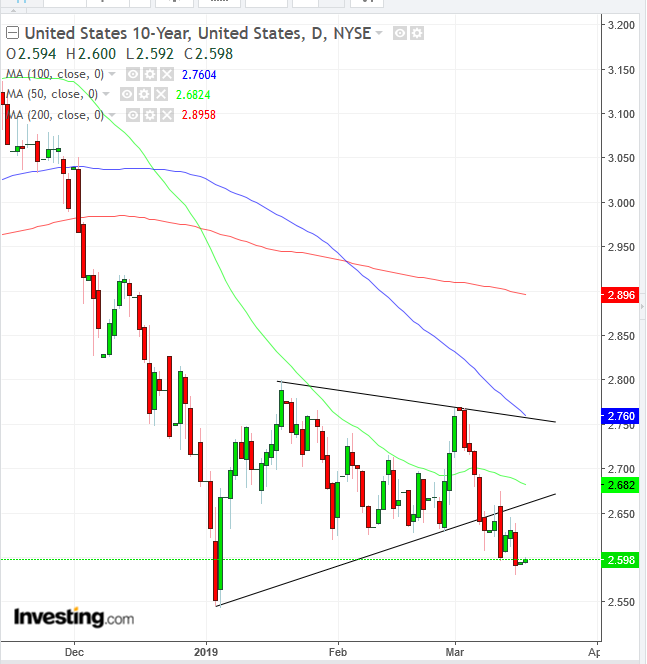 Meanwhile, the yield on 10-year Treasurys gained some ground. It provided a downside breakout to a symmetrical triangle, bearish in a downturn, especially after violating the uptrend since July 2016, which coincided with a death cross. Recently, the anomaly of Treasurys rising in parallel with stocks raised a major red flag for the longest bull market on record. 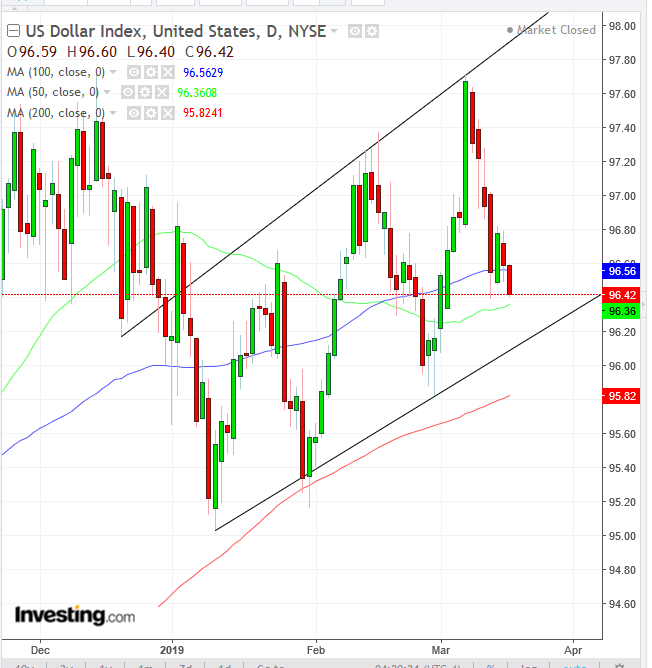 The uptrend in global share prices may be pulling foreign capital out of Treasurys, which in turn means the dollar would be sold as global investors rotate back into domestic currencies. Technically, the greenback fell below the 100 DMA to the 50 DMA, where it found support, for now, above the ascending channel’s bottom, backed by the 200 DMA, perhaps providing a buying opportunity. 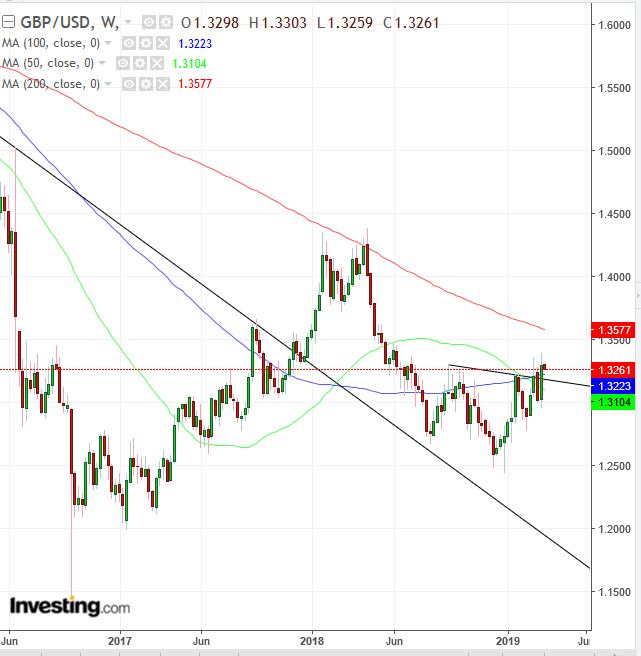 Also in FX trading, the pound retreated after U.K. Chancellor of the Exchequer Philip Hammond increased pressure on Tory MPs from the Brexiteers bloc, urging them to support the deal put forward by Prime Minister Theresa May, which faces a third, crucial round of votes in Parliament later this week.

Technically, the current decline represents a correction, after sterling jumped 2% last week on optimism that a no-deal Brexit will be averted and an extension on Article 50will be granted, providing an upside breakout for a 7-month H&S bottom, which included crossing above the 50- and 100-week MAs. The pattern’s significance is in the context of having broken out of its downtrend line since mid-2014 and bottoming out a second, higher trough since the 2016 flash crash-bottom. The H&S bottom suggests the price will jump over the 200-week MA on its way to forming a second peak, higher than the 2018 below 1.44, completing a peak-trough trend reversal.

In line with the USD slide, gold edged higher, within a potential rising flag, bearish—after a downside breakout—in the short-term downtrend since the $1,346.79 Feb. 19 peak. The pattern’s bearish outlook is reinforced by the fact that it crossed below the uptrend since November. Should the flag’s target materialize, it will have fallen below the uptrend line since the Aug. 16 bottom, increasing the potential for a further selloff.

The yellow metal seems to be benefiting from global economic worries alternating with the Brexit crisis. However, the current outlook may not necessarily be driven by gold’s safe-haven status, as a bullish indicator for equities, but rather be justified by the strengthening dollar alone.

Oil climbed to the highest price since Nov. 12 but later slid into red territory as traders watched closely for signals from a OPEC+ summit starting in Azerbaijan on Monday. Technically, the price extended the upside breakout of a pennant, bullish in an uptrend, after a massive H&S bottom.