In the Asian session, every major index posted losses. Japan’s (-0.99%) underperformed after the country’s machinery orders dropped the most in four months, in a ripple effect of the U.S.-Sino trade war. Also, the country’s larger firms offered lower pay raises compared to previous months, in line with the weaker economic backdrop. Technically, the index slipped well below but closed nearly above the 100 DMA, demonstrating some support.

In yesterday’s U.S. session, equities climbed for a second day. The S&P 500 gained 0.3%, with all sectors but Industrials (-0.83%) edging higher and Healthcare (+0.73%) leading the rally after President Donald Trump significantly cut Medicare spending in his 2020 budget proposal. Technically, the index’s gain was paltry and well off its highs. It formed a shooting star, as selling orders increased when prices neared the March 4 peak that had spurred last week’s rout.

The slipped 0.38% weighed down by Boeing (NYSE:BA), as the aircraft company stock extended losses on news that more countries grounded the 737 Max jet after Sunday’s Ethiopian Airlines plane crash. BA dropped 6.15% to $375.41 on Tuesday, for a total dip of 11.15% in the last two days. Absent an overall market decline, we consider this a buying opportunity, as the day’s lows confirmed the support—seen on Monday—of the November-December-January highs. Also, the 100 and 200 DMA’s realigning with the $360 price level reinforces the presumed support.

The added 0.44% to the tech-led rally, for a total of 2.28% gains over the last two days. Like the S&P 500, the index produced a small real body, suggesting bulls are losing momentum below the March 4 peak.

The underperformed, eking out a 0.12% climb and forming a doji. 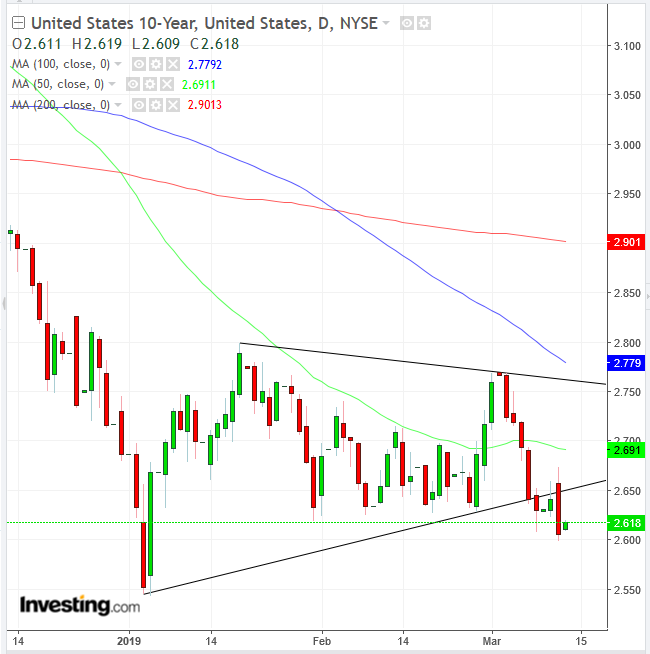 Meanwhile, the yield on 10-year Treasurys appeared to have found its footing after yesterday’s sharp drop. From a technical standpoint, yields attempted to regain a passage into a symmetrical triangle, bearish in a downtrend, only to fall to the lowest since Jan. 3, confirming and reinforcing the pattern’s resistance—as we had forecast.

The dollar is falling for a fourth day, as U.S. inflation dropped to 1.5% YoY, halving last summer’s 3% gain. The softer read bolstered the market narrative that the Fed will remain cautious with interest rates hikes. We consider this drop a buying opportunity, as the price is correcting to the bottom of a rising channel, supported by the 200 DMA. Currently, the price also remains above the 50 and 100 DMAs.

On the other side of the Atlantic, the pound extended a weekly advance ahead of another crucial vote, by British lawmakers, on whether to trigger Brexit with no agreement with the EU or delay proceedings until the country secures more favorable terms. The Bank of England urged financial institutions to ready their contingency plans and ramp up liquidity, after Prime Minister Theresa May’s proposal was rejected in the House of Commons yesterday.

The Australian dollar fluctuated lower along with the country’s sovereign bonds, after weakening consumer confidence exacerbated pre-existing concerns of an economic slowdown. The is finding support above the January trough—the lowest level since Jan. 2016. 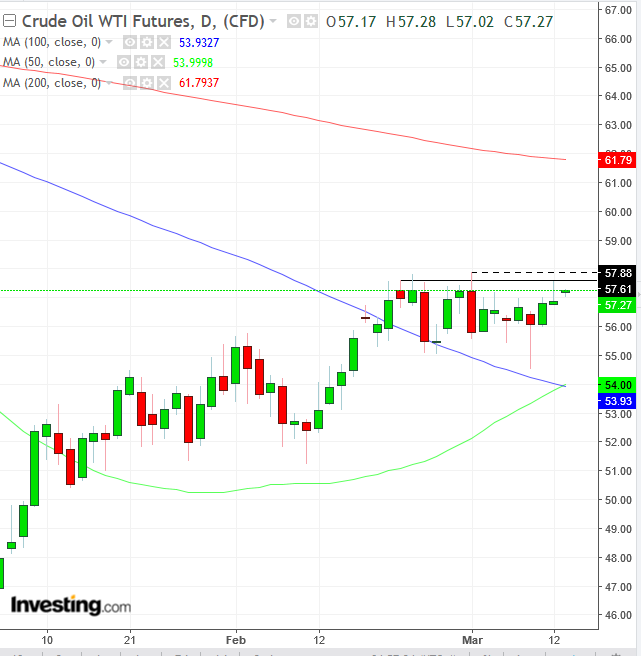 WTI crude opened higher, reaching a two-week peak, after the API reported an unexpected draw of 2.6 million barrels in inventories, which fell significantly below the expected build of 2.655 million barrels. Stockpiles were depleted due to an electricity blackout in Venezuela, as well as the OPEC+ oil supply cuts. Technically, the 50 DMA is crossing over the 100 DMA, but the price needs to breakout of its range since Feb. 20, scaling above its highest point of $57.88, posted on March 1.