US futures were mixed on Thursday, with pointing to a lower open for the tech-heavy index after Facebook (NASDAQ:) stock crashed as much as 25 percent afterhours as the social media heavyweight reported a along with lower daily active user counts in Europe.

The company also said revenue growth should decline by “high single-digit percentages from prior quarters” for the third and fourth quarter.

The pan-European was lifted by industrials shares, the first beneficiaries of the US-EU diplomatic breakthrough. Nestlè (SIX:) climbed as than expected while Royal Dutch Shell (LON:) stock slipped lower after the energy giant posted a .

The has been trading within a 20-pip holding-pattern for 13 hours ahead of the ECB . 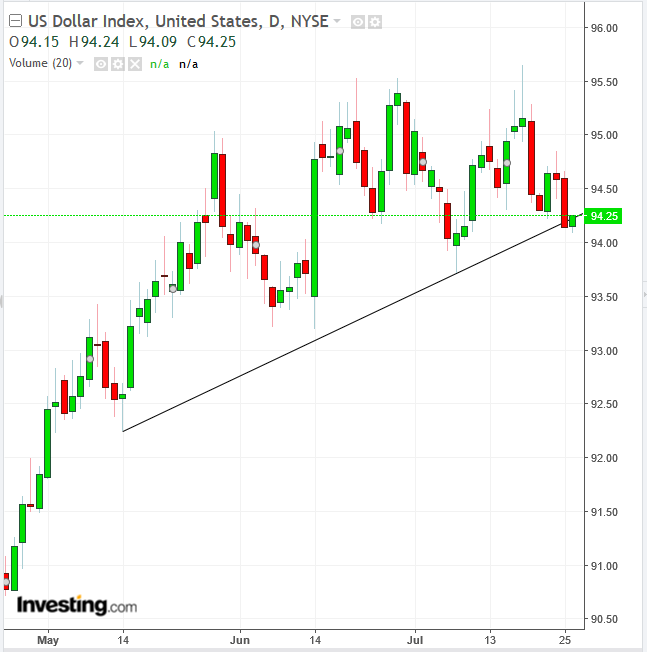 While the single currency strengthened against the dollar on the de-escalation of transatlantic trade tensions, the has been on a knife edge since the news broke—technically, it is fighting to uphold the uptrend since May 14.

Earlier, during the Asian session, Japan’s opened 0.76 percent higher, then swung to end slightly lower than its opening price at 0.7 percent, closing at a 5-week high on positive corporate results and easing trade worries. 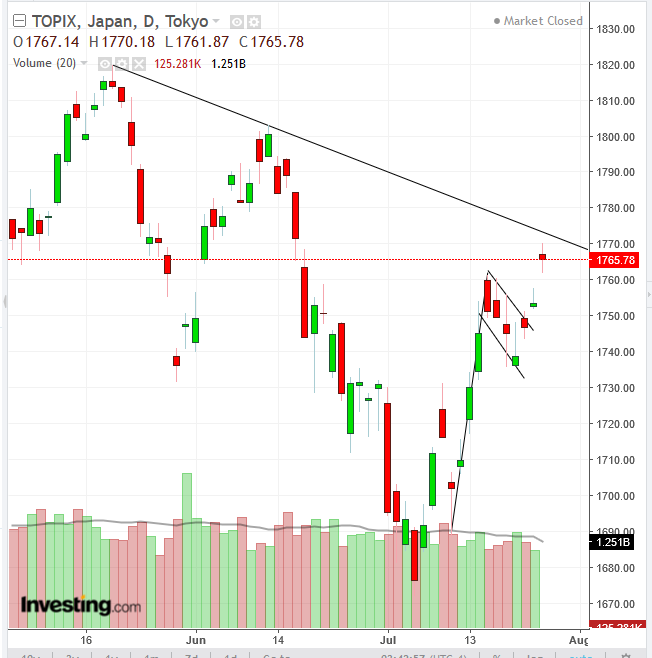 Technically, the higher opening price formed a second consecutive rising gap, which was also the upside breakout of a bullish, falling flag. However, the low volume softens the bullishness of the breakaway gap, as the price retreated from the downtrend line since May 21. Finally, the closing near the opening price formed a High Wave candle—a marker of indecision that often shows up before a reversal or a correction. That would fit with a return move to the completed flag.

The was instead weighed down by reports that the Bank of Japan may stop buying exchange traded funds that track the index, in favor of those that follow broader equity benchmarks. It retreated 0.12 percent, giving up a 0.45 percent advance.

China’s slipped 0.7 percent, for a combined two-day slide of 0.77 percent, amid worries that trade disruptions may hamper the country’s economic growth. In stark contrast with the new-found spirit of cooperation with Europe, Trump accused China of targeting US farmers as leverage to obtain trade concessions.

Technically, today’s decline confirmed the bearishness of yesterday’s hanging man. However, it may be considered a profit-taking correction, rather than a reversal, after the strongest three-day rally since 2016 completed a Three Advancing White Soldiers pattern, thereby indicating reversing momentum on the mainland index. A break below the 2,800 level, where the uptrend line since the July 6 bottom originates, may signal a failure of the rally. The Three White Soldier support is 2,750. 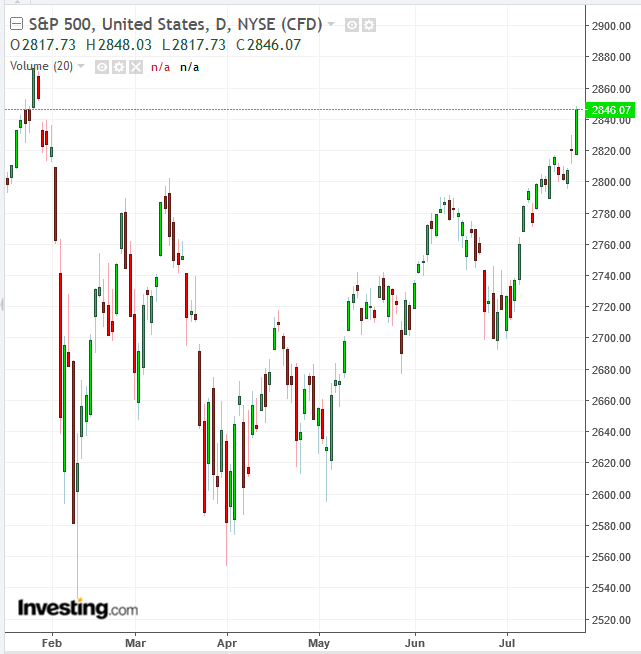 On Wednesday, US equities leaped after the US-EU cease-fire. The jumped 0.91 percent, gaining ground for a third straight day. All 11 sectors posted gains, led by stocks (+1.52 percent). The leading benchmark reached within less than 1 percent away from its late-January record high.

The advanced 0.67 percent, to close at the highest level since February 26, extending the uptrend line since the March bottom.

Trump’s meeting with Juncker came amid a raft of mixed company results, some of which reflected the impact of recent trade headwinds. General Motors (NYSE:) shares plunged after the carmaker on surging metals prices, while Daimler (OTC:) warned lower earnings at its Mercedes-Benz unit will extend into the third quarter because of higher trade barriers. 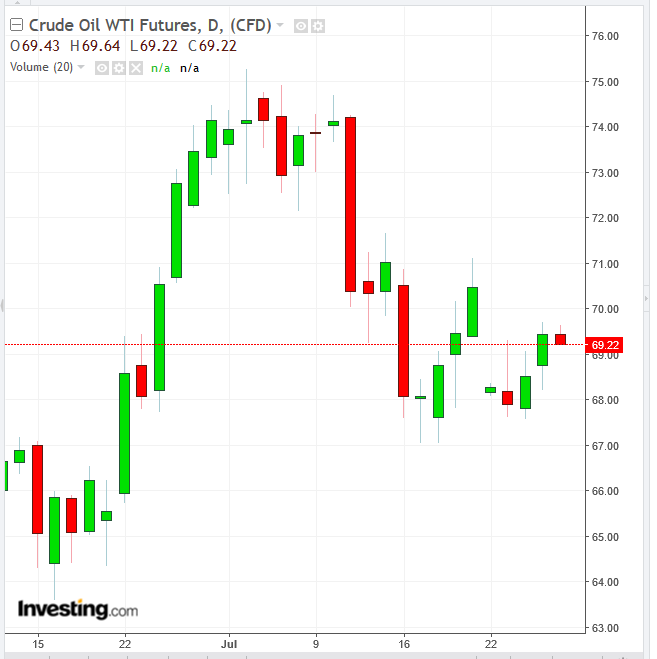 In other news, halted a two-day advance as it turned a 0.29 percent climb into a 0.30 percent slide, even after fresh data showed a decline in .