Contracts on the , , and advanced on Tuesday along with European shares after comments from Federal Reserve officials—that inflation was not a concern—and a warning from Chinese regulators, that it has ‘zero tolerance’ for speculation in commodities, eased inflation concerns.

Falling yields caused the dollar to slide to its lowest level of the year.

In Europe, the technology sector led the Index to a new all-time high, though at the time of writing the pan-European benchmark was off its highs, showing there remain some willing sellers.

In the largest takeover in the history of European real estate, Vonovia (DE:) plummeted almost 7% because it agreed to buy competitor Deutsche Wohnen (DE:) for $23 billion. Wohnen, by contrast, leaped over 15% to a record.

On Monday, Fed officials again downplayed inflation risk, stating that surging prices are simply because of unleashed pent-up demand amid a receding pandemic, which will stabilize as economies return to normal. Therefore, inflation will only be temporary and not upend an economic recovery.

In yesterday’s US session, technology shares led the rally. Ten of the 11 sectors were in the green. was the only sector in the red. (+1.8%) and (+1.8%) were the obvious outperformers, as growth stocks benefit the most from an outlook of lower inflation. By contrast, (+0.5%) was among the laggers, as lower inflation means a narrower profit margin in the largest part of its business, loans. 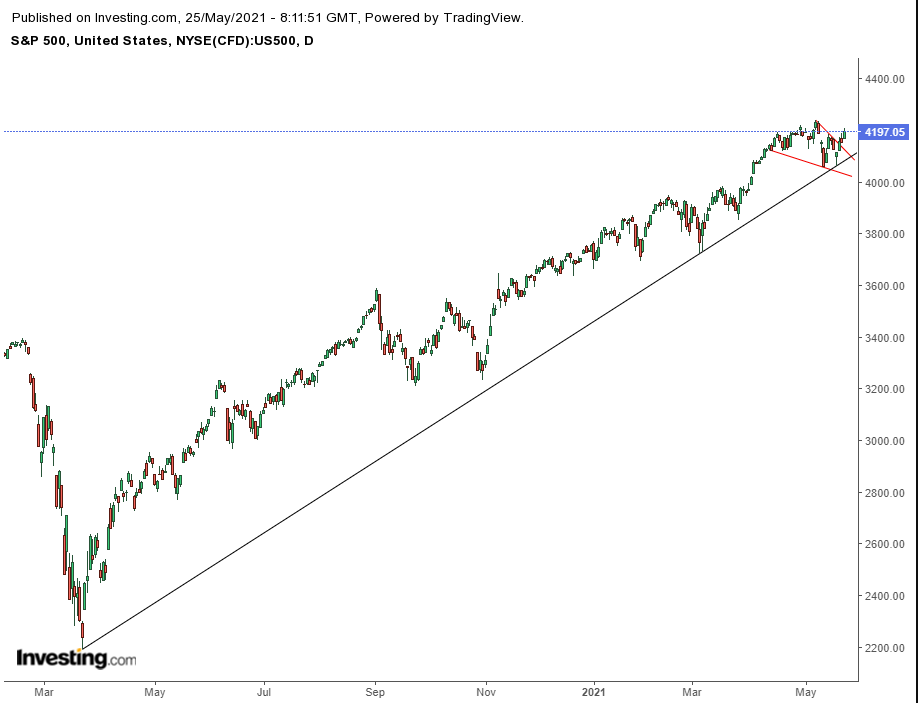 The S&P 500 completed a bullish wedge, which perfectly realigned with the rising trend line since the 2020 bottom. 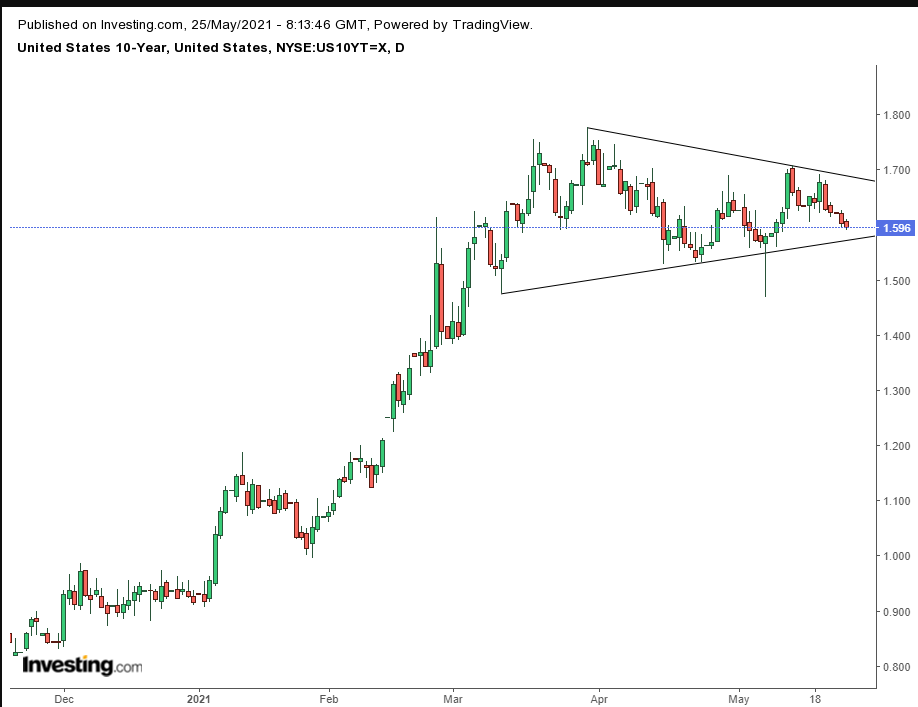 However, we’re here to warn that the current trading pattern, a symmetrical triangle, puts risk to the upside.

Falling yields have dragged the lower, enough to potentially complete a bearish pennant. 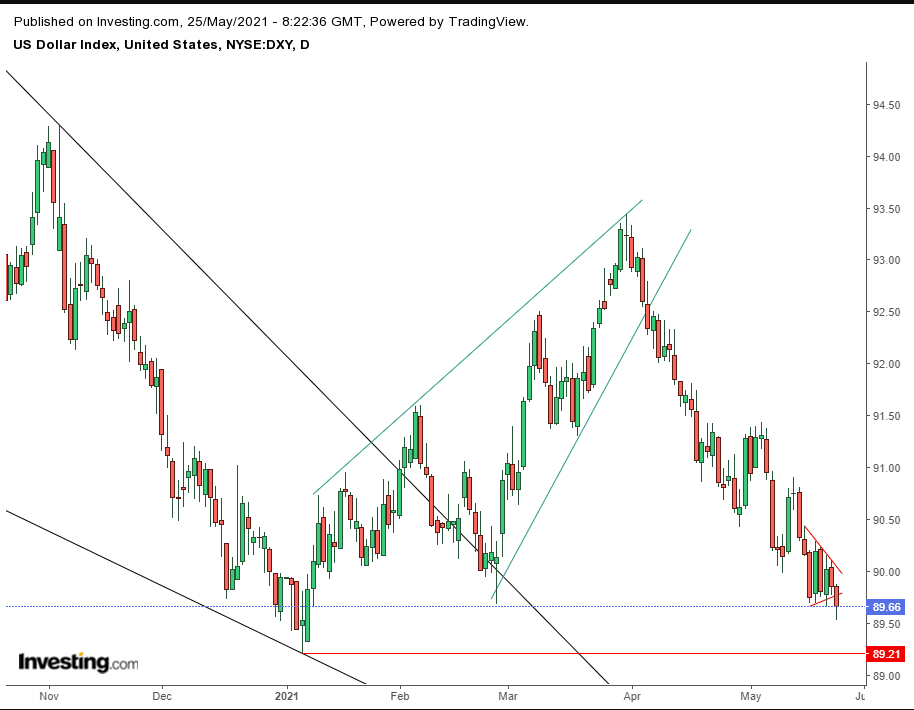 The slide may provide the momentum for the greenback to retest the Jan. 6 low, which we are still holding out as the catalyst for a rebound to retest the 2020 peak.

Lower yields and a weaker dollar made more attractive, pushing it up for the third out of four days. 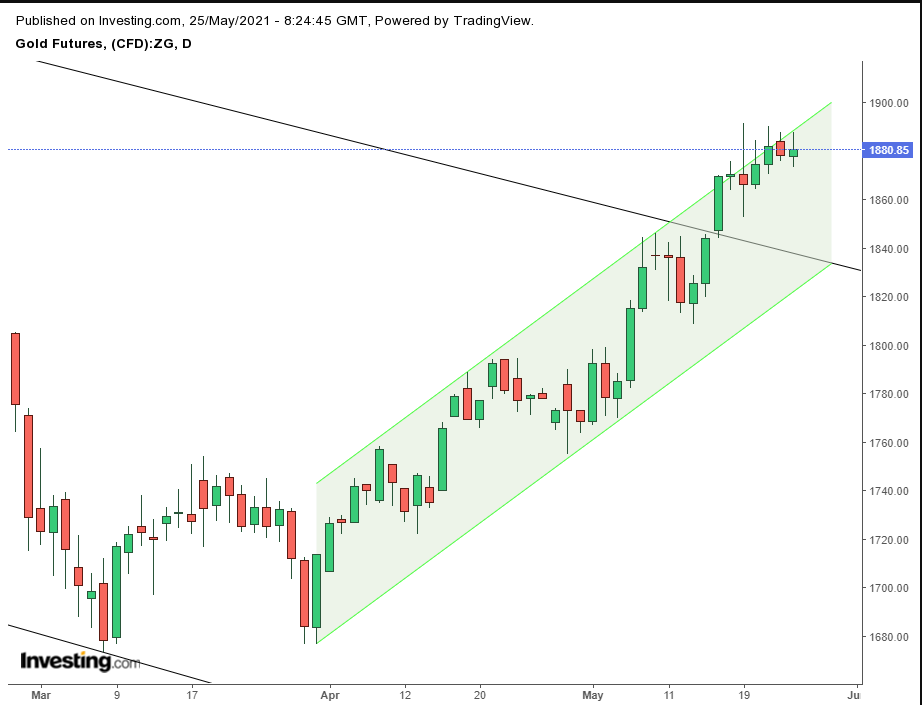 The yellow metal is struggling for the seventh day, at the top of its rising channel, below the 1,900 level, after having broken through the top of a falling channel since the 2020 record peak.

held gains Tuesday after Elon Musk’s effort to bolster the token’s green credentials stoked a rally, extending a bout of marked volatility in the wake of last week’s crypto rout. 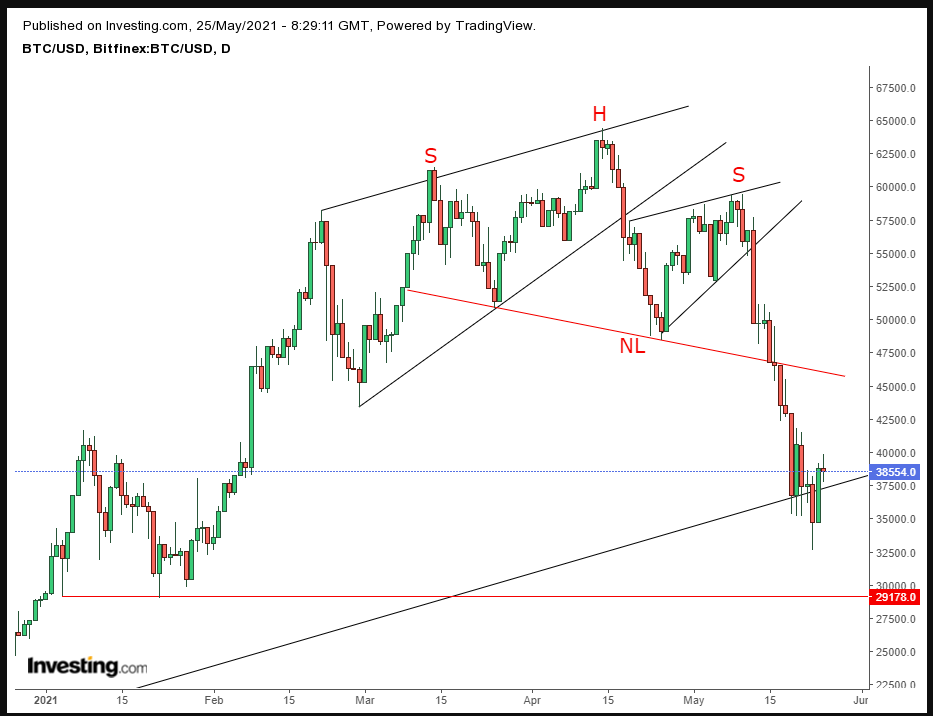 The largest cryptocurrency remains about $25,000, or almost 40%, off its mid-April record.

Bitcoin has bounced off its uptrend line since October, after completing a H&S top—which already achieved its implied target—after it more than halved its value, reaching our earlier price target. We are now bullish on the token.

retained most of the biggest two-day gain since March as investors tracked a recovery in demand that may enable the market to accommodate any fresh flows from Iran should the nation’s nuclear deal be revived. 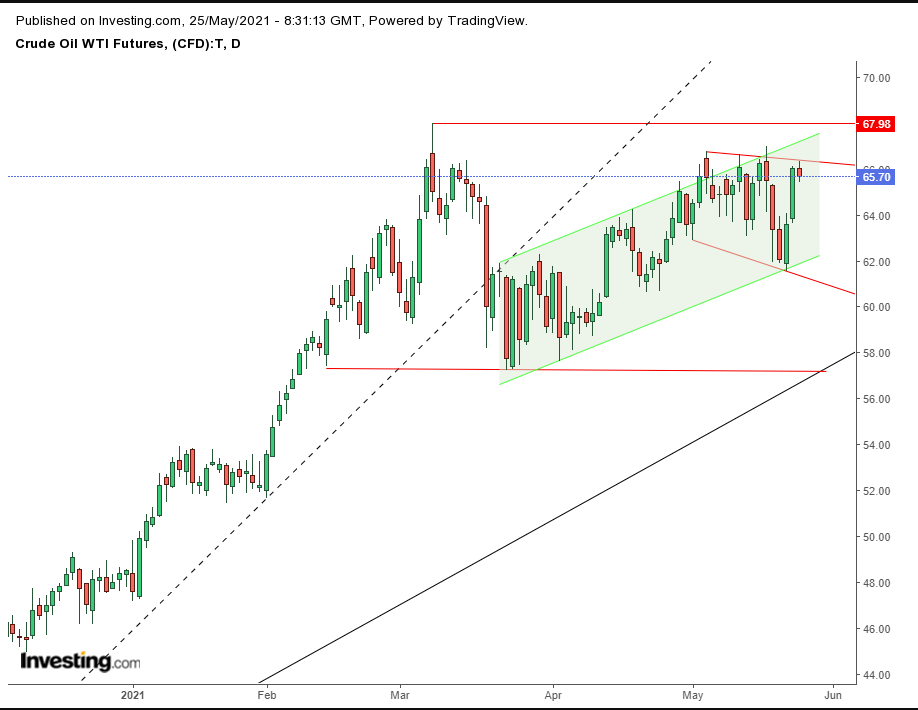 The price is experiencing downward technical pressure, falling from the top of its rising channel and possibly a new downward channel, giving in to resistance of the Mar. 8 peak.