Equities in Europe along with futures on the , and wavered this morning, after Asian traders remained broadly risk-off, pricing in expectations of weaker growth due to the ongoing emerging markets rout. The flight to safety in the early global open boosted US Treasurys and safe haven currencies.

The region-wide slipped 0.27 percent lower at the open, dragged down by miners shares. However, it later pared losses, trading in green territory by late morning, to then lose steam again and slide into the red. The benchmark has rebounded from a 3 percent selloff over the last six sessions.

Earlier, during the Asian session, the edged lower for the sixth consecutive day, losing 1.52 percent. China’s dropped 0.47 percent, for an aggregated 3.21 percent over the last eight sessions, since mainland shares started being sold off two days earlier.

The underperformed its mainland counterpart, falling 0.99 percent. China’s traders have cashed out on firms listed in Hong Kong on concerns around the as well as China’s overall economic weakness since the start of the trade war with the US. 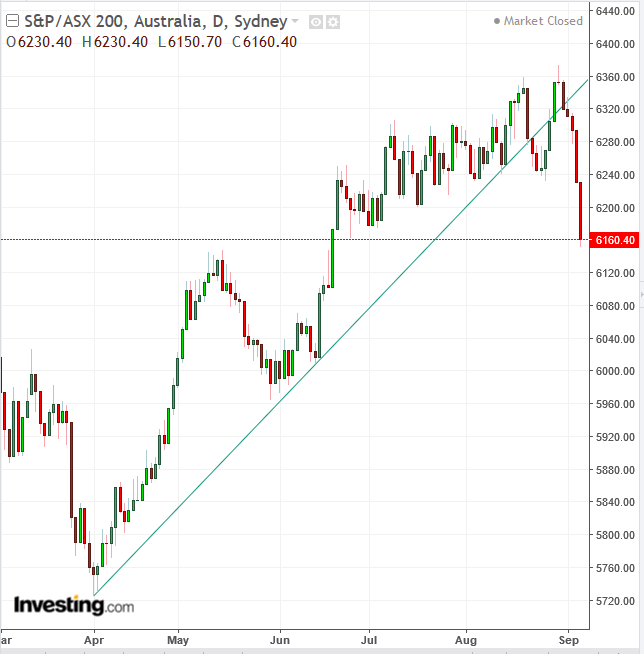 Ironically, Australia’s lagged its regional peers, posting a 1.12 percent loss, for a 3.02 percent tumble over the last six sessions. The selloff was prompted by the potential of another $200 billion in US tariffs on Chinese goods. The reason it affected Australia’s shares even more than Chinese stocks is that the country’s economy is reliant upon exporting its resources, with China as its largest single buyer. Therefore, a slowdown in the Chinese economy also reduces the outlook for Australia’s economic growth.

Technically, the recent selloff pushes prices below their uptrend line since early April.

Japan’s slid 0.74 percent lower, for a combined six straight-day 2.71 percent drop. Th index has still managed to outperform the Hang Seng despite typhoon Jebi and harsh weather conditions over the past two months.

During yesterday’s US session, losses in FAANG shares dragged down the broader market after executives from leading tech companies were grilled by regulators on Capitol Hill over the role of social media in Russia’s meddling with the US presidential election in 2016.

The tumbled 1.19 percent, the most in three weeks, led by price slumps in Twitter (NYSE:), Facebook (NASDAQ:) and Alphabet (NASDAQ:). The heightened regulatory pressure on tech shares added to fears of an emerging markets spillover, prompting investors to cut losses.

The was the only major US index that closed in positive territory, while small caps listed on the underperformed, dropping 0.33 percent. Once again this demonstrates that it isn’t the trade war that has been driving markets in the latest rout, but rather the overall fear of EM-spurred global selloffs. In times of uncertainty, the stability of mega-cap companies, such as those listed on the Dow, attracts investors while small caps are considered risky. 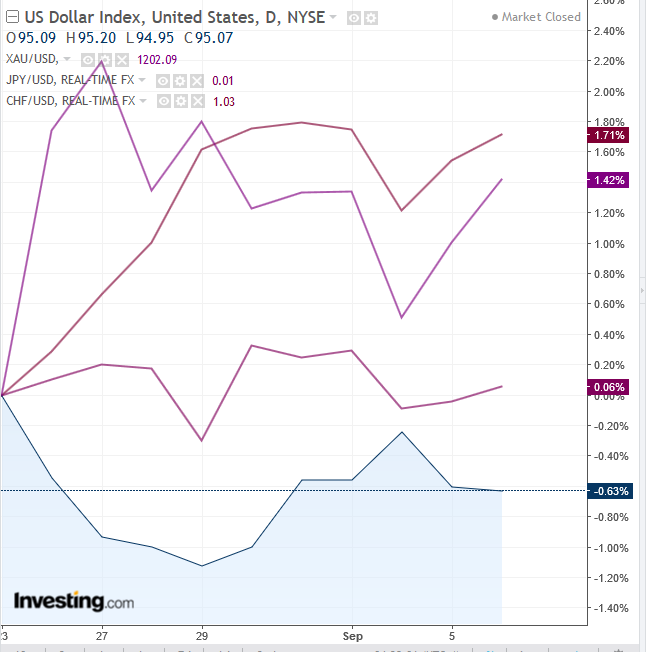 In FX markets, the extended yesterday’s decline, in favor of the more traditional safe haven assets: the , the and .

The UK’s inched higher for a second day after considerable volatility sparked by protracted Brexit discussions. Technically, the current rally may be following the return-move of the GBP’s crossing above its downtrend line since April.

Bitcoin, and other alt-currencies plummeted after Goldman Sachs reportedly dropped its plans to open a cryptocurrency trading desk. 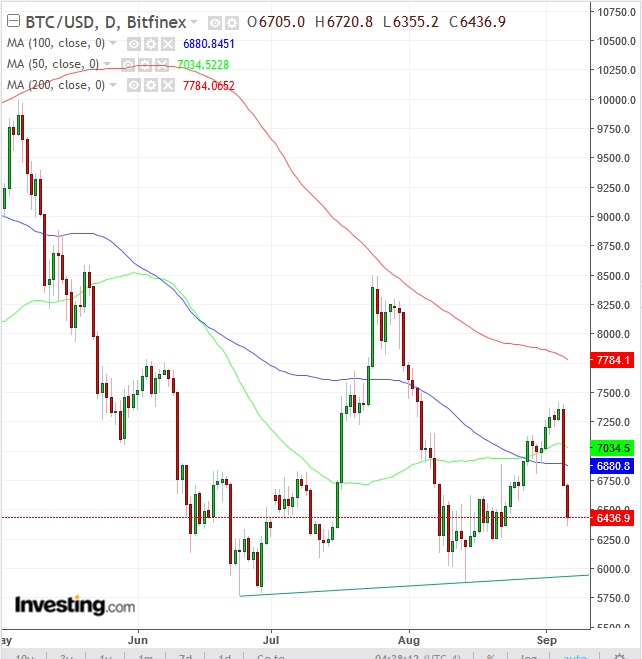 is down 4.55 percent today and almost 12.75 percent over the last two days, wiping out two weeks of gains. Technically, the slump happened after the price neared the 200 DMA (red), when it proceeded to fall back below the 50 DMA and 100 DMA.