European stocks followed the majority of Asian shares into red territory on Wednesday after the US said it will start imposing 25 percent duties on an additional $16 billion worth of Chinese imports on August 23. Futures on the , and are wavering around neutral levels, suggesting the news may prompt a slowdown from yesterday’s rally in the US session as well.

The opened lower, paring half of yesterday’s advance in early trade, as renewed trade tensions once again stole the spotlight and mixed corporate results gave traders one more reason to stay on the cautious side.

Earlier, during Asian trade, China’s underperformed its regional peers, slipping 1.27 percent lower and giving up about half of yesterday’s surge. However, Hong Kong’s closed 0.39 percent higher, helped by the fact that foreign investors use it as a portal to Chinese stocks. According to the South China Morning Post, overseas purchases of Chinese shares hit $4.1 billion during the past three weeks, while local traders were discouraged by trade war fears. Perhaps quelling some of those fears, fresh data showed today China’s grew faster than expected in July and surged.

Yesterday, US shares extended their winning streak to a fourth day, as investors managed to keep their focus squarely on positive economic and earnings headlines. 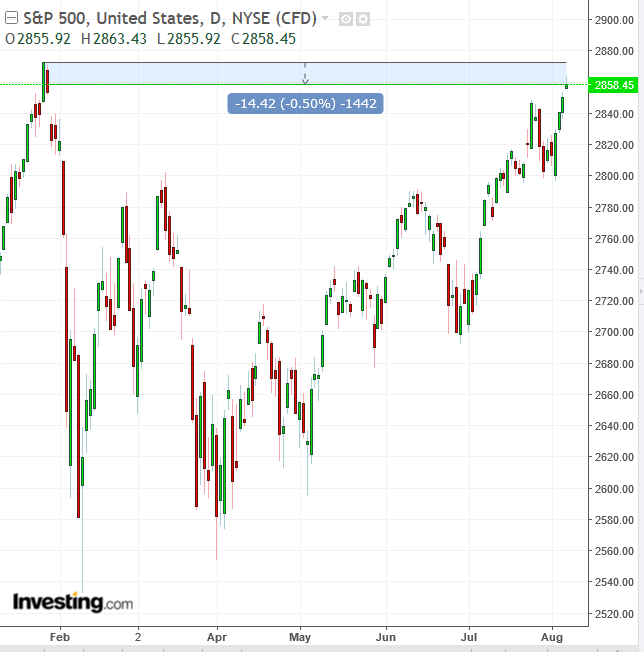 The gained 0.28 percent, boosted by stocks in the (+0.74 percent) and sectors (+0.71 percent). (-0.61 percent) underperformed. Technically, the price gapped up and formed a shooting star, with a close 0.5 percent below its January 26 record high. The shooting star, already bearish as it retraced from the session highs, could be the centerpiece of an Island Reversal, in Western technical analysis, or an Evening Star in Japanese candlesticks, if followed with a falling gap.

The ticked 0.5 percent higher; the climbed 0.31 percent and the underperformed with a 0.19 percent gain. 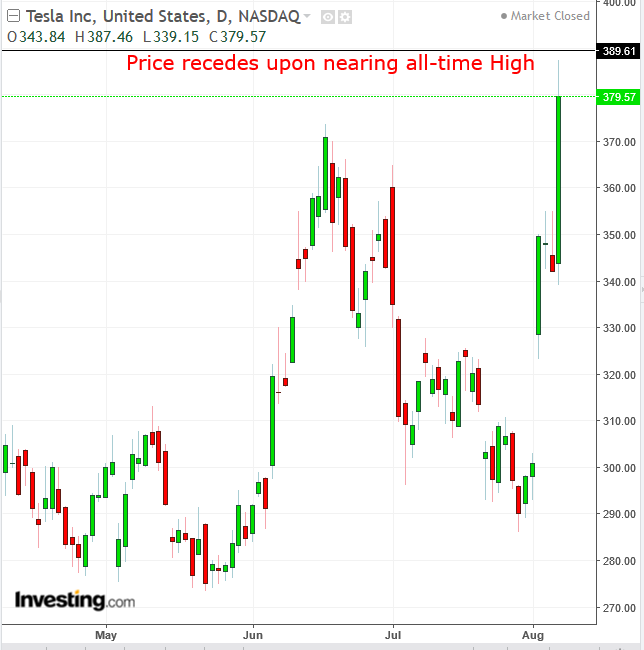 Meanwhile, Tesla (NASDAQ:) stock leaped higher after CEO Elon Musk said he’s considering taking his company private for $420 per share, which would set the group’s market value at about $71 billion. Shares soared 10.8 percent, or $37 higher, after the announcement, to $386.68. Technically, the intraday price neared the all-time high of $389.61 posted September 18 and retreated, underscoring a resistance level.

Overall, stocks retreated from higher gains late in the session, as traders rotated out of some bond proxy positions to buy into Treasurys, after a bond selloff sent yields higher. During morning European trade, Treasury yields had stabilized ahead of the biggest-ever note auction. 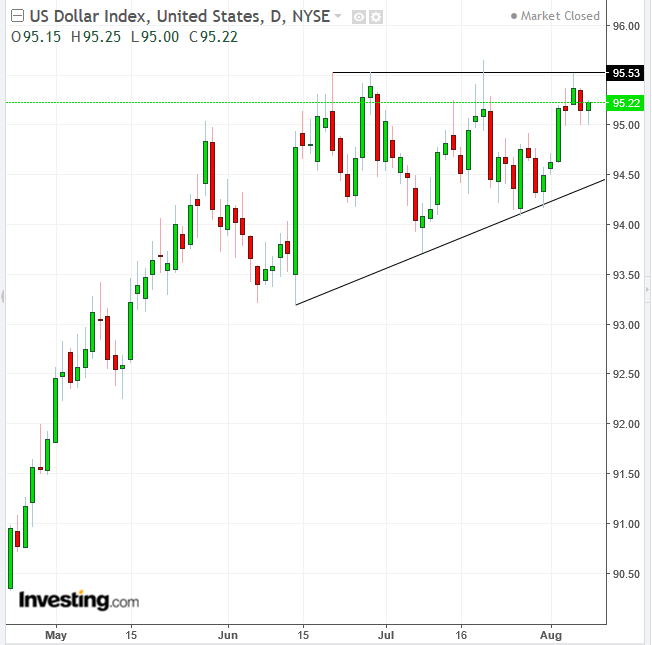 The bounced back against most of its major peers yesterday. Technically, this is the greenback’s fourth attempt to overcome the 95.50 level. An upside breakout would demonstrate that demand absorbed available supply and is bidding prices higher to find willing sellers.

In other FX news, the fluctuated as traders tried to hedge against a ‘no-deal Brexit’ and the edged lower.

Meanwhile, People’s Bank of China is said to be urging some largest lenders to prevent any “herd behavior” and momentum-chasing moves in the market.

’s eked out a third straight gain, after Iran’s foreign minister said that US sanctions will not choke Iran oil exports. However, the commodity is back into negative territory at the time of writing.