A fresh round of trade headwinds hit equity markets on Wednesday, sending European shares and futures on the and lower, while contracts for the managed to edge higher on Apple (NASDAQ:)’s .

The pan-European opened higher but then started sliding lower erasing most of yesterday’s gains. 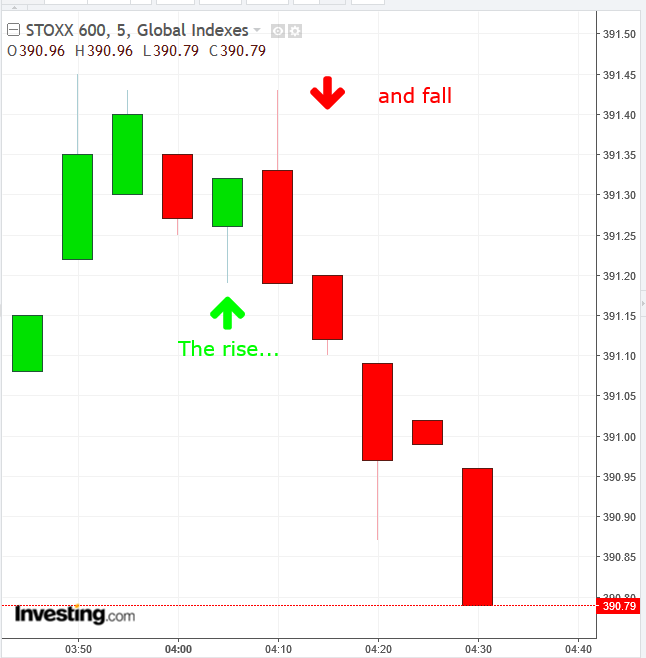 The Trump administration is said to be considering hiking its levies on $200 billion worth of Chinese goods from 10 to 25 percent, which in turn sparked accusations, by Chinese officials, that the US is “blackmailing and pressuring” the country to change its trade stance. Worries that US President Donald Trump’s latest threats will translate into action dragged miners stocks on the European benchmark lower, despite Rio Tinto (LON:) posting upbeat , in line with expectations.

Carmakers, another sector that is sensitive to exports jitters, managed to eke out a gain after Volkswagen (DE:) reported solid for the second quarter, although it warned that trade tensions posed great challenges in the months ahead.

A few reasons may have prompted Trump to raise the stakes on trade.

First, economic figures are showing a diverging impact of trade tensions on Chinese and US growth. China’s dropped to 54.0 in July from 55.0 in June, hitting an 11-month low. Moreover, Chinese assets including the , equities and are at or near year lows. 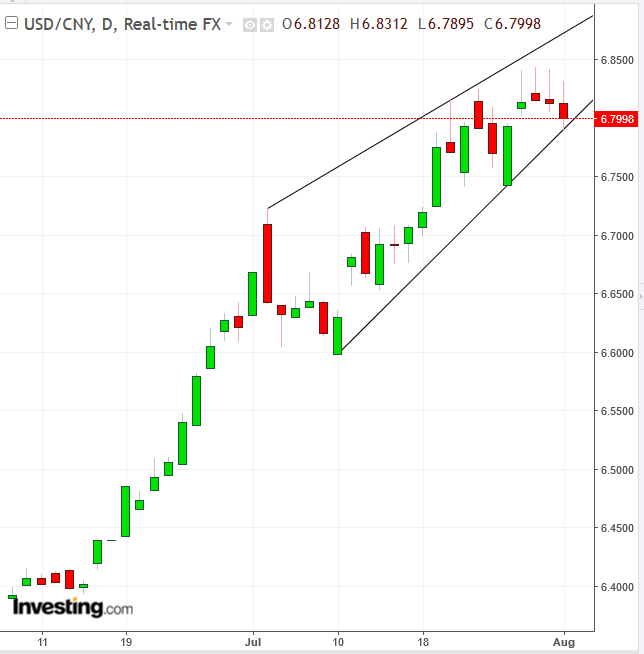 Adding to that, Chinese policymakers weakened the fixing for the yuan to the lowest level since May 2017. Interesting, despite the weaker fixings, the dollar is falling a third straight day versus the yuan, confirming the three preceding shooting stars. So far, it finds support by the uptrend line since July 10, but a downside breakout would complete a bearish, rising wedge. This pattern demonstrates that over-eager demand has run out of steam.

On the opposite side of the spectrum, US hit an annual 4.1 percent growth in the second quarter, the fastest pace in four years. The is up 5.34 percent year to date and stands 2 percent away from its record high; the yield on bonds is 5 percent away from a 7-year high, and the is 10 percent below a 6-year high.

Earlier, in the US session, those same reports boosted trading, allowing investors to rotate into larger cap stocks: the outperformed (+0.55 percent) smaller-cap, domestic shares on the (+ 0.22 percent).

The SPX climbed 0.49 percent, led by two growth sectors, and . was one of the only two sectors in red, dragged lower by lingering trade worries.

Investor focus will now shift to central bank policy, after the BOJ slightly stepped up its threshold for yields to 0.2 percent from 0.1 percent Tuesday. The Federal Reserve is expected to at 2.00 percent today and the Bank of England to to 0.75 percent from 0.50 percent tomorrow.

In other news, the greenback ticked higher against most of its major peers for a second day, weighing on emerging market currencies. Commodities dropped as slipped on expectations of an increase in production, as well as on the stronger USD. 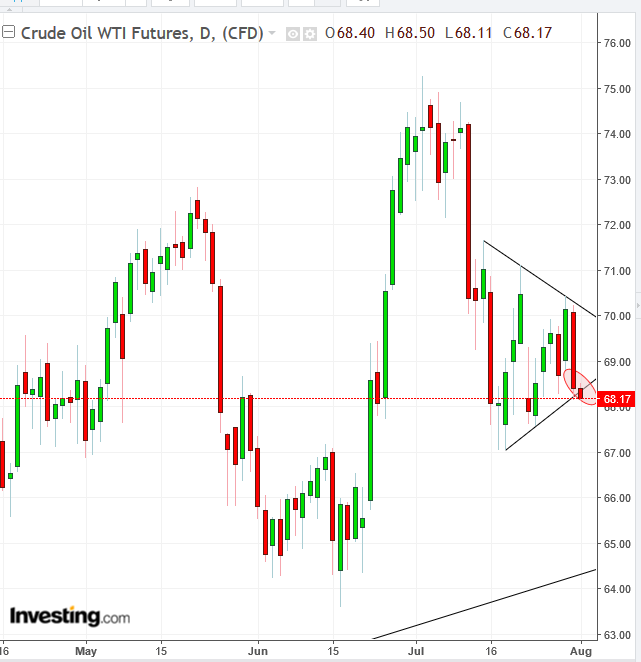 Oil is penetrating the bottom of a pennant. Should it close with a downside breakout, it would suggest that prices will continue to fall, toward the uptrend line since mid-November 2017, as sellers lower their asking prices to find willing buyers.