US futures for the , , and climbed on Thursday, along with European shares. They all bucked the slump in Asia as investors weigh multiple risk drivers, including the safety of reopening economies and rising US-Sino tensions, combined with the possibility of some horrifying, fresh economic data.

We’ve noticed a pattern of US futures rising after declines of their underlying benchmarks during the previous day’s trade. Is this a market disagreement or perhaps an intervention by the plunge protection team?

This morning, contracts on the S&P 500 erased all of Wednesday’s losses. Contracts on the four major US indices were up at least 1%, with futures for the Russell 2000 outperforming yet again (1.3%). The e-mini brought up the rear, albeit it a still respectable 1.18% at time of writing. This morning’s rally comes after most of US indices snapped a two-day uptick yesterday, with the the only guage to finish in the green (+0.5%).

Today’s positive move in futures comes even as markets await today’s Labor Department release of , which are expected to show an additional 3 million people filed for unemployment benefits in the past week, which will bring the US well above the 30 million mark hit after last week’s report.

The also offset yesterday’s drop, Chinese surprised well to the upside. This offset a series of grim earnings results and a warning from Air France KLM SA (PA:) that demand could take “’several years’” to recover.

Another question we can ask, though not necessarily answer, is, why would European shares benefit from rising China exports, while China itself, along with other regional indices, declined. Perhaps it’s the fallout of China being in the crosshairs of President Trump’s renewed trade war rhetoric amid a pandemic that pressured Asian shares.

Japan’s was the only major Asian benchmark that gained, (+0.3%), when trading resumed after a long holiday. 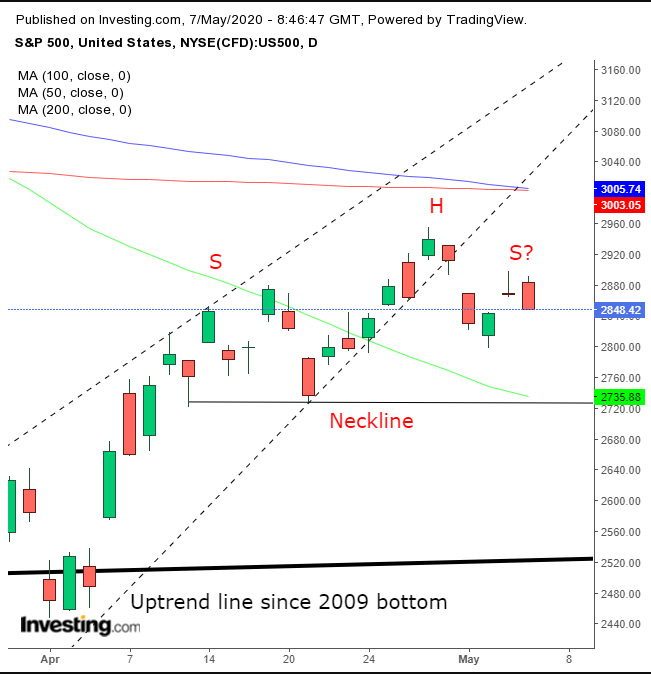 With that downward move the odds for a H&S top increased, sending a second , following its rising wedge.

The yield on the US Treasury rebounded after opening lower in the Asia session. 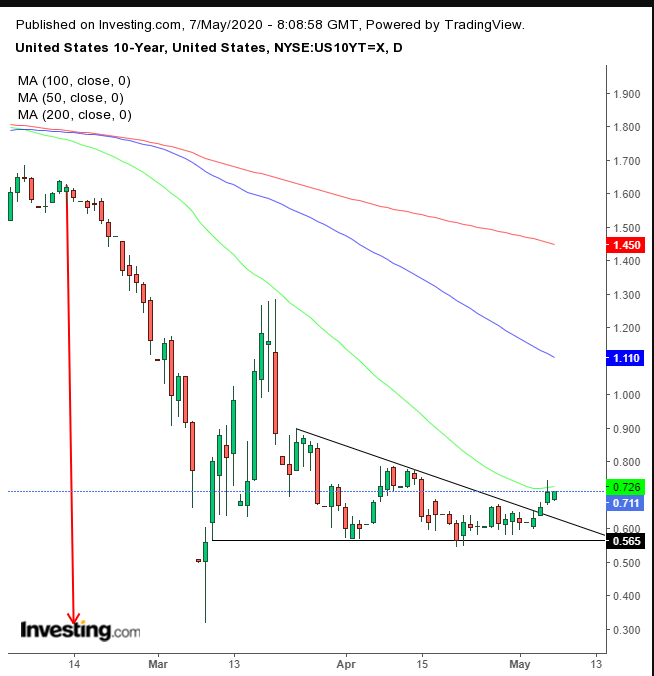 Should rates hold they would just be able to sustain their rally for a fourth straight day. Technically, yields are bogged down for a second day by the 50 DMA after the broke the topside of a descending triangle, causing pattern failure.

That sort of event tends to throw the instrument in the opposite direction of its presumed breakout. However, considering the wild trading that occurred before the pattern development, it’s unclear if it’s structurally viable.

The appears to have ended a three-day winning streak. 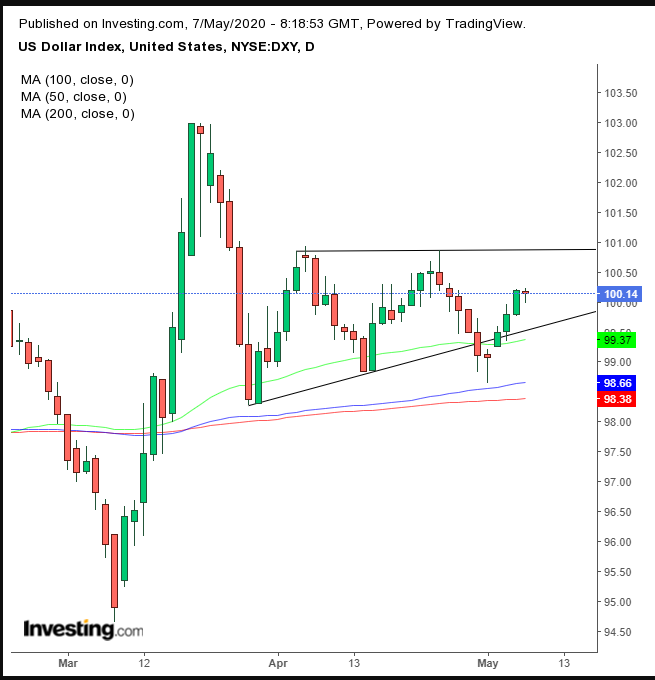 CNBC reported yesterday that the USD strengthened on risk-off, following negative economic data. But that’s not self-evident considering that over the prior two days the global reserve currency strengthened even while equities were rising.

This apparent market inconsistency could have several possible reasons:

From a technical perspective, the dollar is trading within a counterintuitive ascending triangle. The pattern has the telltale signs of a bullish build-up, with the demand line rising against a flat supply line. However, this follows a fall, rather than an ascent. Combined, the preceding up-and-down, wild moves make any interpretation suspect, similar to Treasurys. 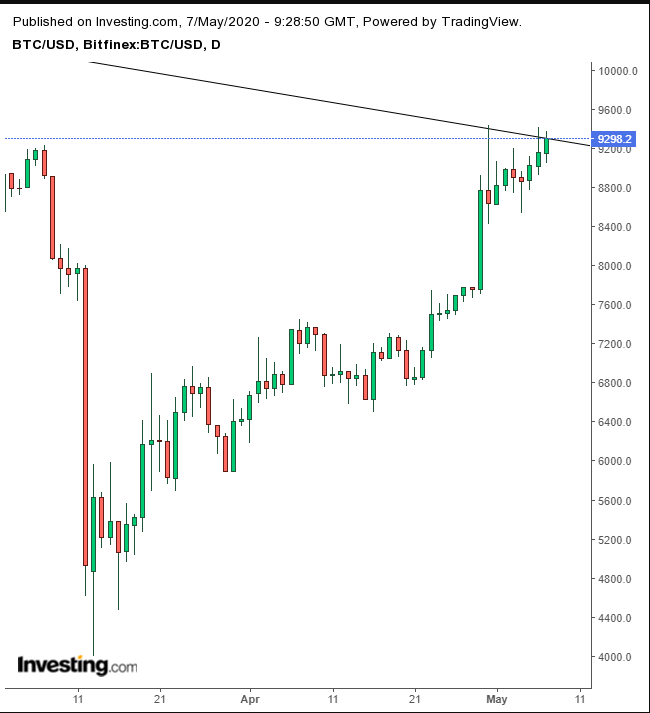 For the second day, is attempting to break the top of a falling channel, in place since June 2016 ahead, ahead of , which is scheduled to occur in four days.

Oil is moving higher once again, after yesterday’s slight decline which ended a five-day rally. 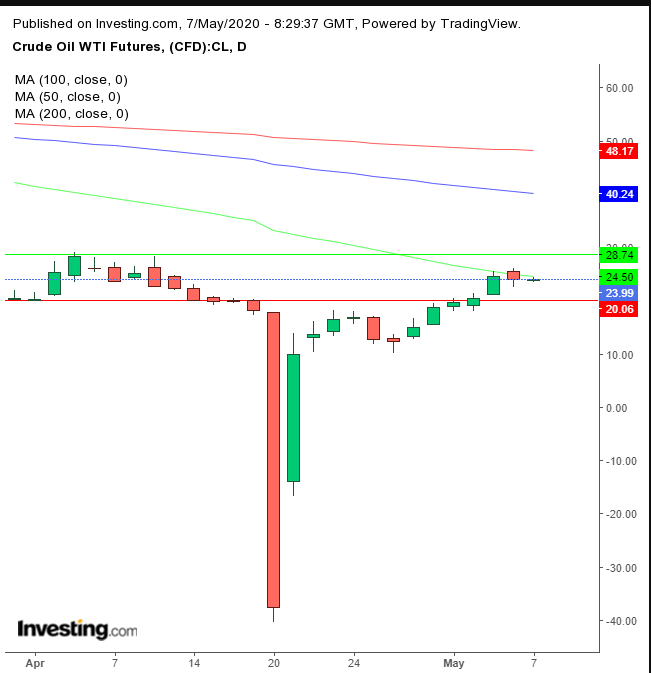 Perhaps the supply glut eclipsed a recovery in demand. Or perhaps it was just profit-taking by traders who benefitted from a rally that saw the price double in just five days. Or it may be a combination of the two.

Technically, the 50 DMA kept prices in check for a third straight day, increasing the odds for a pullback. We anticipate crude will range between $20 and $30 until the next catalyst.