A strong start to earning season is helping traders ignore the risk to economic growth from the Delta variant of COVID-19 and the worst inflation levels since 2008. That positive sentiment pushed futures on the , , and higher in trading on Thursday.

However, falling Treasury yields have dragged the dollar lower.

All four US contracts were slightly in the green as investors hold on to gains in the current rally.

Futures contracts on the NASDAQ 100—whose listed mega-cap tech companies were in maximum demand when consumers relied on their services to work, shop and play during coronavirus lockdowns—lagged today, while Russell 2000 and Dow Jones futures were leading. The Russell index of 2000 small-cap domestic players as well as the index of blue chip mega-caps equate with the value trade cyclicals which benefit from an expanding economy.

In Europe, the Index traded higher, led by travel and leisure which were outperforming, again demonstrating optimism on easing social restrictions and the economy getting back on track to what used to be considered ‘normal.’

Financials were also among the leaders of Thursday’s European rally as the European Central Bank meeting is taking place today. At the ECB’s last meeting, the bank took a page out of the Fed’s playbook, announcing it will allow inflation to surpass its 2% inflation target.

At the same time, it increased its 2021 GDP prediction to 4.6% from 4%. Traders must now grapple with the benefit of an upgraded GDP forecast while rising inflation chips away at the buying power of the single currency.

Not only has the lost 4% of its value in the last two months, it might be on a path to lose much more. 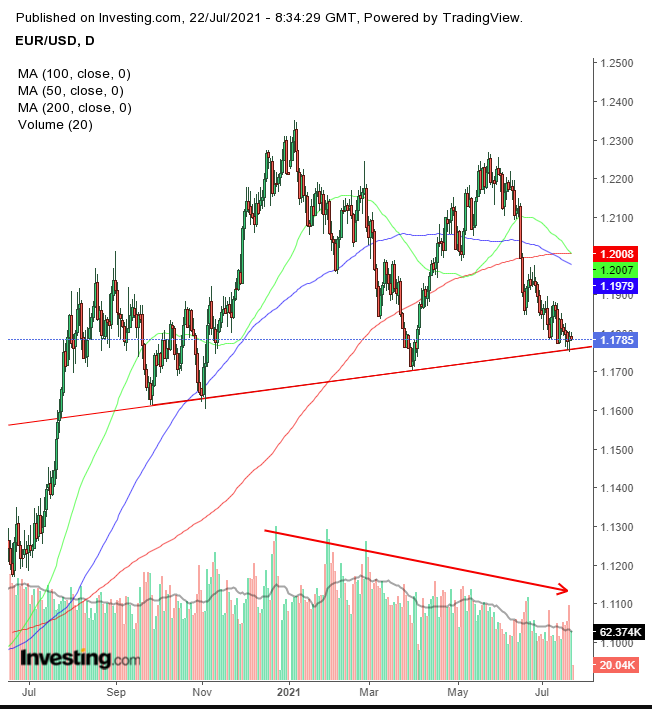 The single currency’s 50 DMA is tapping on the top of the 200 DMA, as bears attempt to force it into a Death Cross, which would have special meaning as any further dip in the price would complete a massive, full year-long, H&S top. Note the negative divergence volume provided since the January high, and the head of the reversal pattern.

When it reported today, UK-based Unilver (AS:) lowered its earnings guidance due to increased costs, an illustration of the real impact of inflation. Traders expressed their dissatisfaction with the global consumer staples giant and sold the stock, sending it tumbling 4%. Technicals signal there signs of a deeper drop ahead. 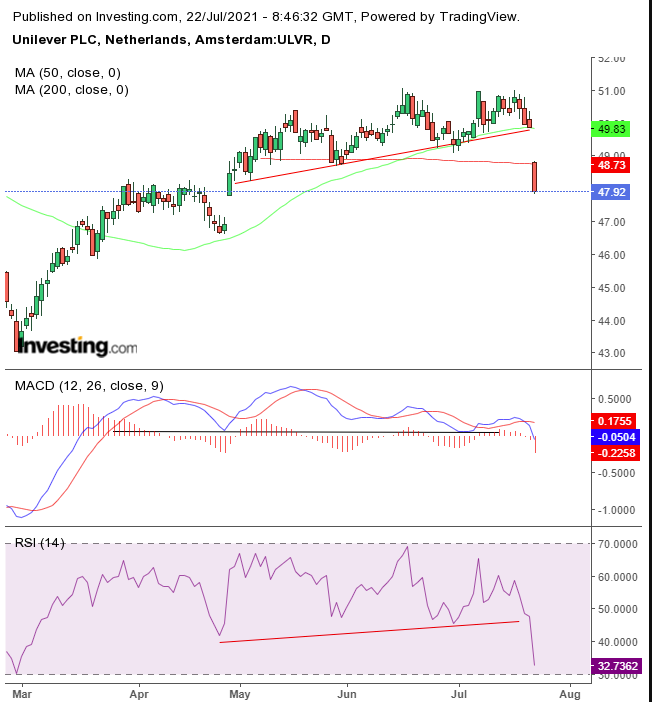 The selloff coincided with several simultaneous bearish indicators. The price completed a top, whose neckline is reinforced with the 50 DMA. It also formed a breakaway gap, which included crossing the 200 DMA below which it was rejected. That sent shares even lower.

Both the MACD and the RSI topped out as well, demonstrating that a broad spectrum of price gauges reversed. That momentum supported the move, promising further downside.

Yesterday, on Wall Street, US stocks advanced, as solid company profits distracted investors from the continued spread of the coronavirus, which last year was responsible for the fastest recession in history.

On Wednesday, the Index posted its biggest two-day rally in two months, closing in on its all time high, led by value stocks which were sold off the most during social restrictions.

Yields on the Treasury note managed to come back from a dip, climbing for the third day in a row, for the first time in more than a week. Investors are diverting capital from safe havens into risk assets as their risk appetite increases after seeing corporate quarterly profit figures. Technically speaking, however, Treasuries are likely to keep rising, pushing yields further down. 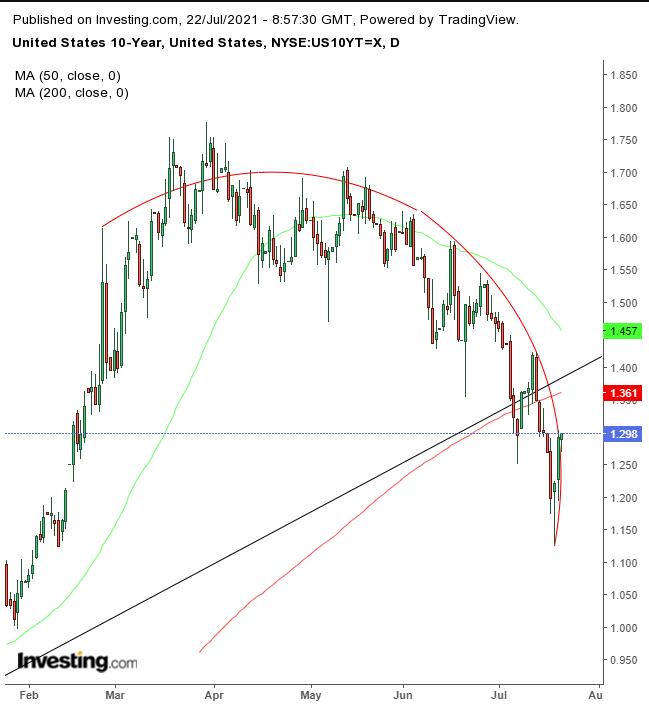 Rates fell below their uptrend line, reinforced by the 200 DMA, as the 50 DMA plummets to what appears to be an inevitable Death Cross.

The retreated for a second day, following a four-day rally. However, we’re betting the greenback will continue higher. 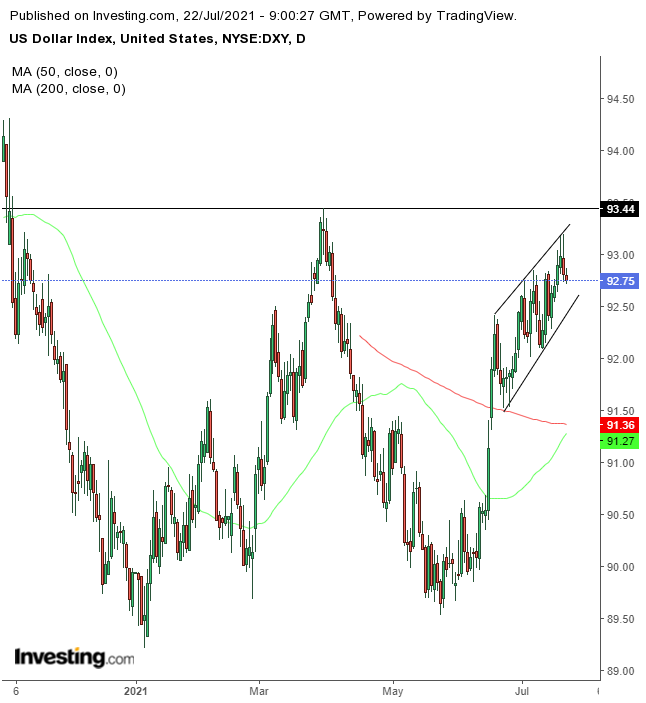 The USD is trading within a rising channel, as the 50 DMA goes for a Golden Cross. And, if it resumes along its channel, it will soon take on the Mar. 31 high, completing a large double bottom.

The current indifference to inflation pushed lower for a second day, 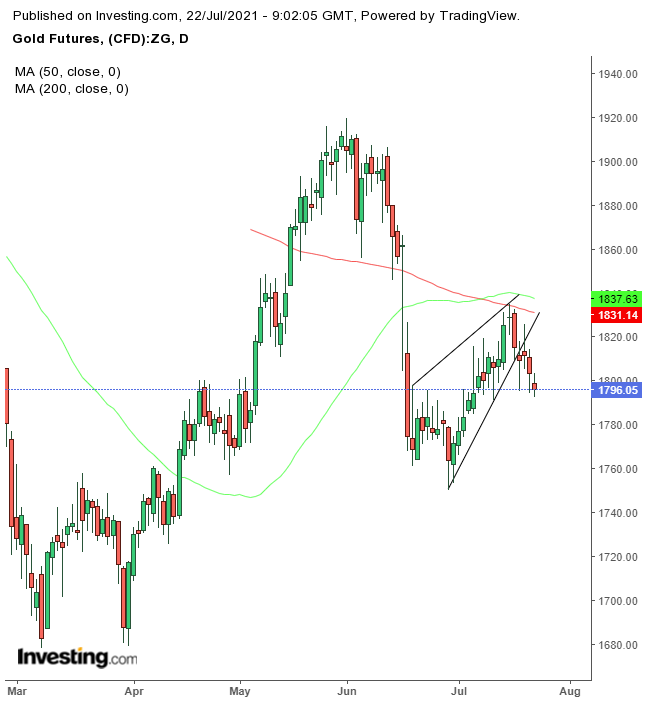 The yellow metal is extending the downside breakout of a bearish, rising wedge, formed below a Death Cross.

returned to north of $32,000 after Elon Musk said that SpaceX owns some of the virtual currency, and Ark Investment Management’s head, Cathie Wood touted the cryptocurrency at Ark’s ‘B-Word” virtual conference. We, however, are bearish on the digital token at this time. 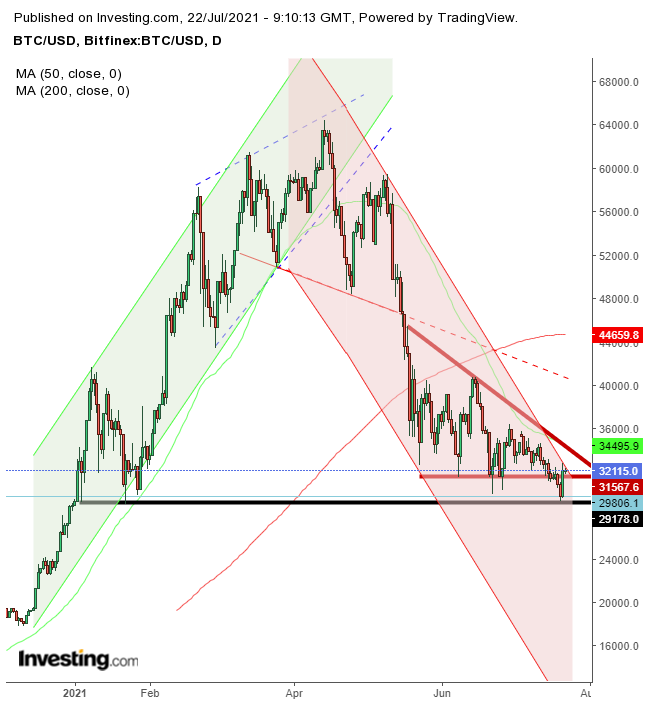 Bitcoin was struggling to remain within a descending triangle, a pattern that develops when selling pressure increases, while demand stagnates. We have long put $29,000 as a crucial level, which if broken, would lead us to expect a strong additional downside.

Although extended Wednesday’s breathtaking gains, it slowed dramatically. The market has been volatile this week due to the shift in OPEC+ policy as well as mixed signals on future demand. 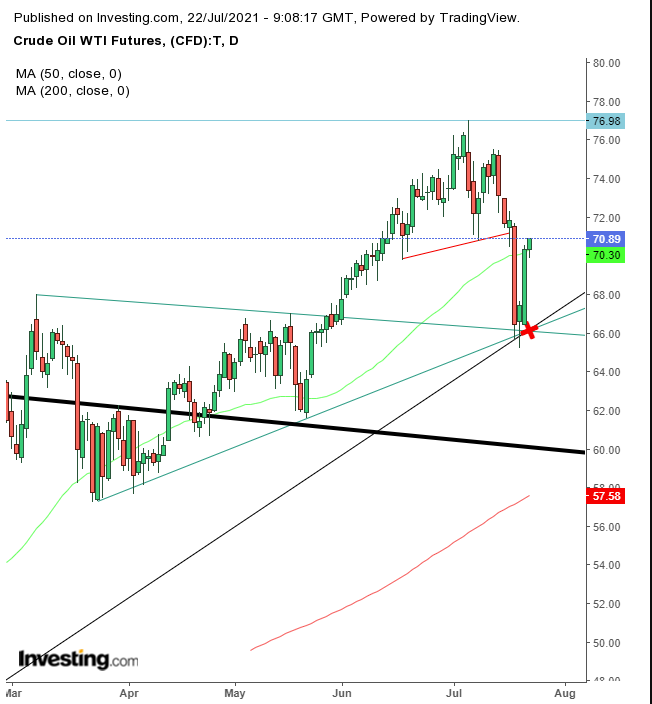 Oil bulls are challenging a bearish stronghold, the neckline of a recent, small H&S top.