Investors eagerly await earnings results from Netflix (NASDAQ:) later today, the first large technology firm to unveil its third quarter financials, after the close. Upbeat earnings prospects seem to be outweighing ever-present geopolitical risks at the moment, propping up futures for the , and .

As well, shares on the which earlier lost momentum and slipped to a 22-month low, have rebounded somewhat though the index remains in the red at time of writing, helped by defensive shares.

During earlier Asian trade, shares were mixed, with most regional benchmarks up on hopes that trade disputes between the US and China will reach a solution soon. However, Chinese equities underperformed, with the shedding 1.95 percent and hitting the lowest level since July 2014 and the slipping 0.85 percent, hitting the November 2014 low.

The lackluster performance comes after official figures showed an uptick in inflation for the fourth straight month, in line with expectations—which raises questions as to why investors were still downbeat. China’s grew 2.5 percent year-on-year in September, from 2.3 percent a month earlier, mostly due to higher fresh food prices. 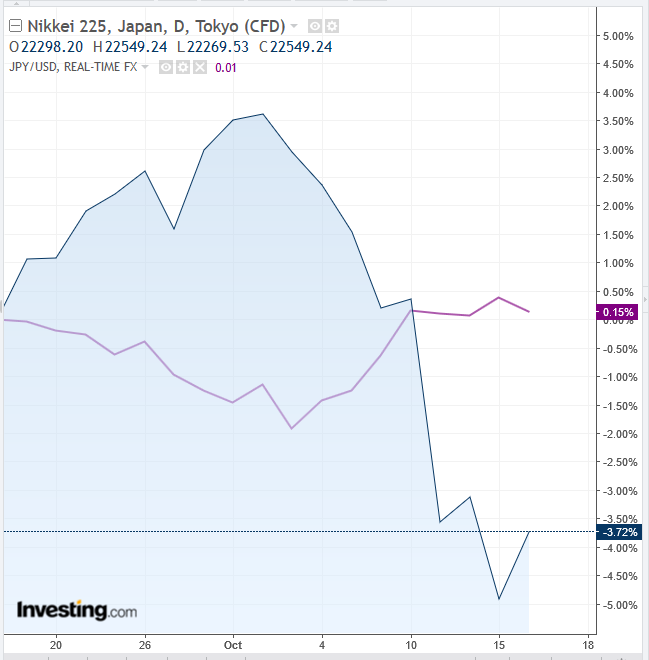 On the other side of the spectrum, Japan’s outperformed, gaining 1.25 percent, helped by a weakening —whose strength yesterday had weighed on shares of companies reliant on exports.

On Monday, US stocks slid, dragged lower by the sector. The tech-heavy underperformed (-0.88 percent). The small cap was the only major US benchmark that managed to close in the green.

Comments from US President Donald Trump, threatening China with further tariffs and accusing the Asian country of being a bigger meddler than Russia in the 2016 presidential elections, probably also weighed on the performance of US equities. Technically, the and the NASDAQ fell back below their 200 DMA and the re-crossed below the 100 DMA. Each of the indices has repositioned itself at last week’s levels, the level at which they stood before Friday’s rebound.

The Russell 2000 hasn’t recovered since crossing below the 200 DMA on Wednesday. 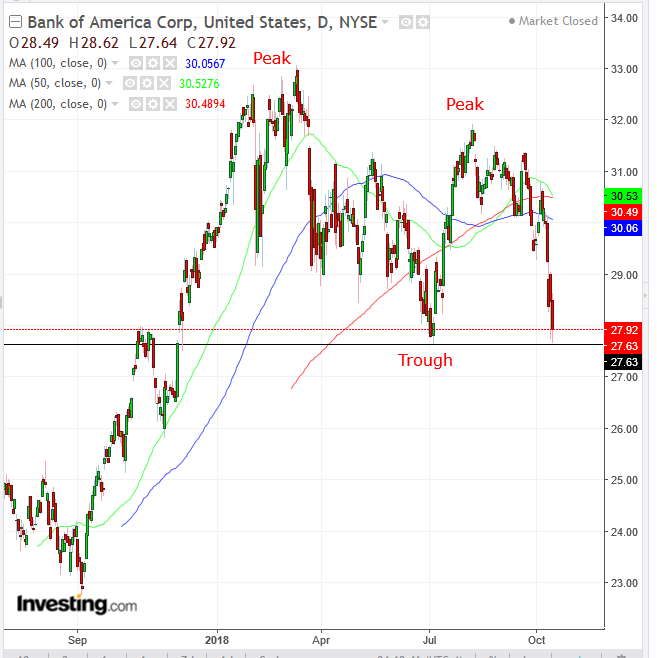 Bank of America (NYSE:) dropped after lower investing and banking fees due to the growing competition from so-called shadow banks. The bank also posted a 29 percent slump in debt-underwriting revenue, almost twice as bad as expected, driving overall revenue down 18 percent. The magnitude of the loss was amplified by the fact that rival JPMorgan Chase (NYSE:) 1 percent on underwriting and advising fees. BAC shares dropped 1.9 percent to $27.92 on a closing basis, after posting an intraday low of $27.64: a single cent above the July 6 low, the lowest level since December 1 and a long-term top reversal.

Harris Corp (NYSE:) and L3 Technologies Inc (NYSE:) surged on the announcement of a merger of equals which would make the new entity the sixth largest defense contractor in the US. 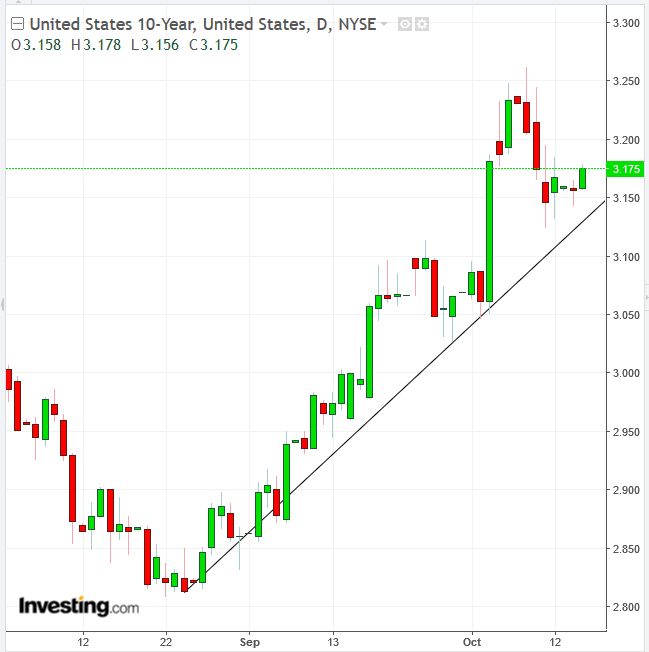 Meanwhile, yields on US Treasurys leaped. They look set for the highest close in almost a week, confirming the general risk-off mood.

Last week’s selloffs were driven by investors unwinding positions to recalibrate their portfolios, after 10-year yields hit 3.25 percent for the first time since mid-2011, prompting a surge in . Even though US indices fell below some key moving averages—which certainly warrants heightened alertness, in our view—we maintain our outlook for upward equity prices, based on the fact that uptrend lines remain intact. 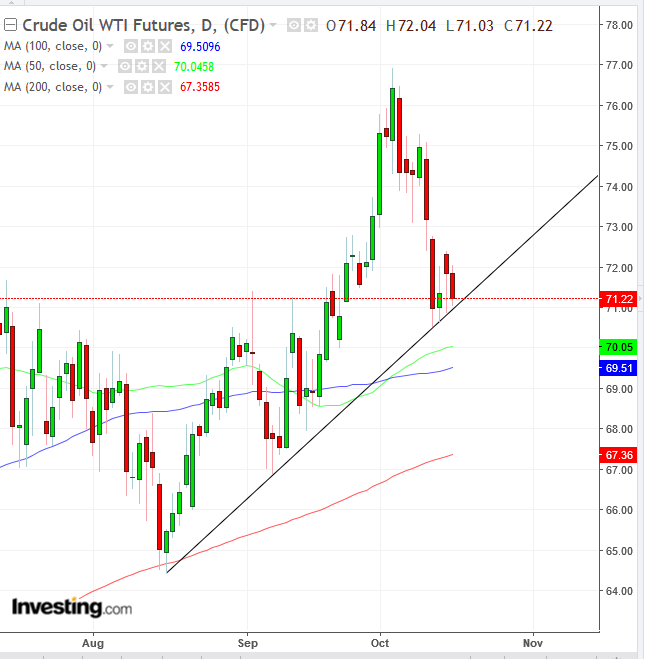 In commodity markets, is retesting an uptrend line since mid-August amid persistent tensions between Saudi Arabia and the US over the disappearance and apparent death of Washington Post journalist Jamal Khashoggi. 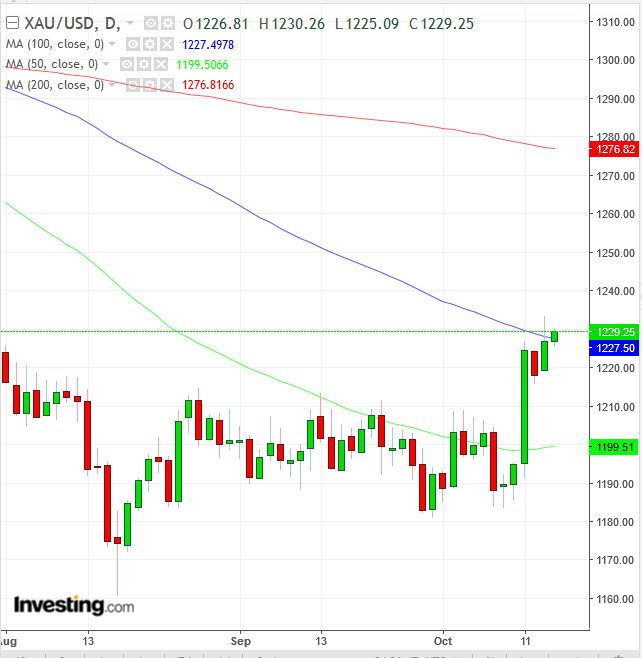 is holding onto gains and crawling back above the 100 DMA, taking on yesterday’s intraday high and the $1,230 psychological round number.

In FX news, the jumped after the country’s beat economist estimates. The held steady after UK Prime Minister Theresa May struck a conciliatory tone after Brexit talks with EU counterparts stalled over the weekend. The retreated after seven straight days of gains, spurred by a Turkish court releasing US pastor Andrew Brunson on Friday, after two years of detention.