Futures on the , and rallied this morning, perhaps a last-ditch attempt by US equities to end the worst year of the current, long-standing equity bull market on an upbeat note. Chinese President Xi Jinping’s reported confidence that China and the US can meet halfway and seal an agreement “as early as possible” added to Trump’s messages, on Saturday, of “big progress” on trade to shore up market sentiment.

The was up for a second day buoyed by miners and retailer shares in the early session, though it later eased to neutral levels. The pan-European benchmark is still set for a 13 percent loss on the year—the worst annual performance for the benchmark since 2008.

In the earlier Asian session, most regional exchanges were closed for the holiday, including China, Japan and South Korea. Xi Jinping’s comments helped Hong Kong’s gain 1.34 percent, though the advance could be the result of traders flocking to the only open market in the region.

On Friday, US equities paused their upward trajectory after a two-day rally that included the biggest daily reversal since 2010; clearly investors were not willing to take on yet more risk over the weekend. Last week’s shortened holiday-week started with the worst Christmas Eve session ever, which was followed, right after Christmas, by the largest daily advance since the Great Recession. Holiday trading is now likely to get thinner, as trader indecision hampers activity.

The dropped 0.12 percent to close the week, though it still managed to hold onto its first weekly gain of the month. 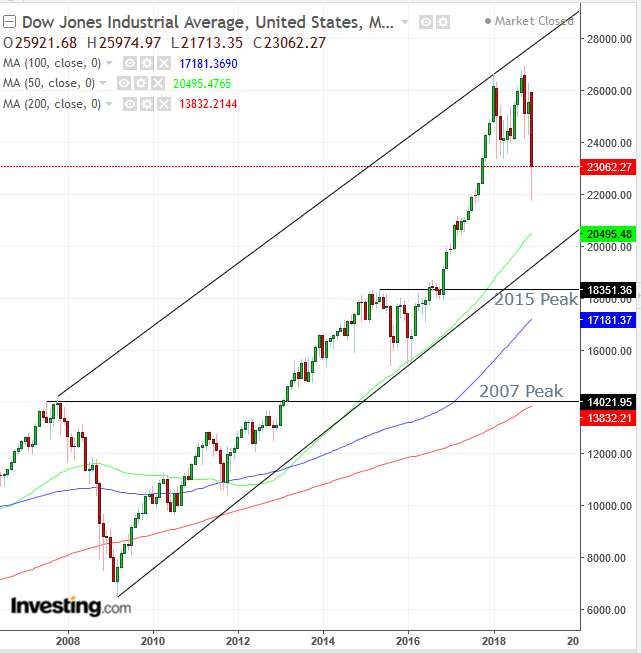 The Dow has reached the top of its rising channel for the first time since 2007, when shares lost half their value in 18 months. The bottom of the channel is at 20,000, another 13 percent drop, bringing the total decline from its October peak to 25 percent. Note the major MAs: the 50-month MA, which points at the technical pressure point of the channel bottom; the 100-month MA, which marks the 2015 peak; and, finally, the 200-month MA, which draws the line in the sand for the 2007 peak. 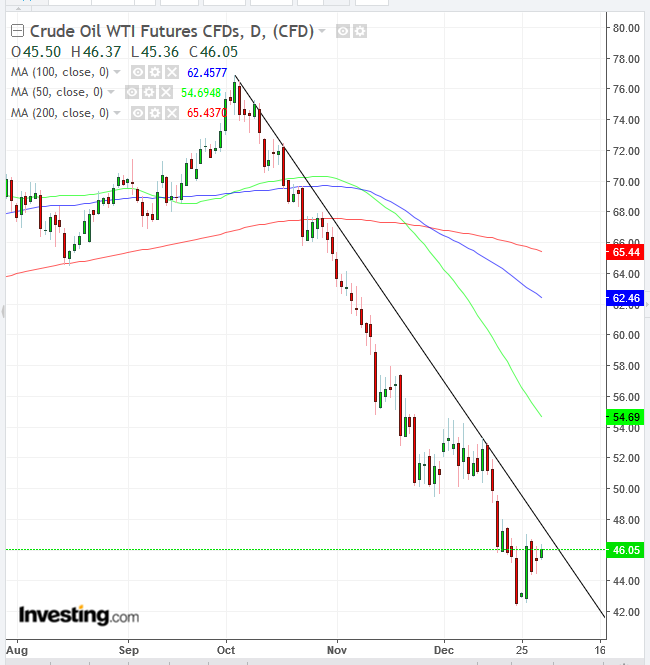 Meanwhile, slipped from its high of the day on Friday as it neared the downtrend line from early October. The oil market was caught in a dual dynamic this year with cause and effect becoming blurred. At first, rising US supply compounded by lowered demand due to a pessimistic global growth outlook drove WTI lower. The drastic declines pushed down market averages, leaving oil prices mired in their steepest quarterly slump since 2014.

Political and geopolitical risk—ranging from the UK’s convoluted exit process from the European Union to the US-China trade dispute to the ongoing showdown in the US between Trump and Congress over the budget—will continue to cloud market sentiment in the new year. The political landscape in the US is also unsettling investors, following departures of senior officials and Trump’s repeated criticism of Fed Chairman Jerome Powell.