European stocks and futures on the , and tracked Asian equities higher after U.S. lawmakers reached a deal on Monday, warding off a second government shutdown.

The opened higher and quickly extended gains to 0.6 percent, with nearly all sectors in the green on the back of some upbeat earnings reports. Chemicals and car manufacturers were among the top gainers, while tire maker (PA:) surged over 11 percent after forecasting higher profits for 2019—which gave investors something to cling on to amid a weakening outlook on growth.

In the earlier Asian session, Japan’s (+2.61 percent) led the region higher, boosted by a weaker —which in turn was weighed down by strength.

On Monday, U.S. shares posted a mixed picture amid thin trading, ahead of key U.S.-Sino trade talks and as negotiations in Washington on a contentious spending bill continued in the background.

The eked out a 0.07 percent gain after meandering throughout the trading session. At the close, gainers outnumbered decliners. Still, the languishing sector (-1.03 percent) overshadowed gains in (+0.53 percent)—which had been led by railroad shares.

The (-0.21 percent) was the only major U.S. index closing in the red, as health care companies such as UnitedHealth (NYSE:), Pfizer (NYSE:) and Merck (NYSE:) pulled the benchmark lower. Volumes were muted as investors were waiting to see some direction in ongoing domestic and global political issues.

Futures and shares inched higher after U.S. President Donald Trump, speaking at a rally, steered clear of criticizing a deal-in-the-making among legislators to fund the government. He also said he didn’t want China to have a ‘hard time,’ increasing the potential for success of high-level trade talks coming up on Thursday and Friday.

Investors probably found Trump’s words reassuring following a drop in the , whose devaluation has been at the center of the U.S. President’s attacks against Chinese officials. 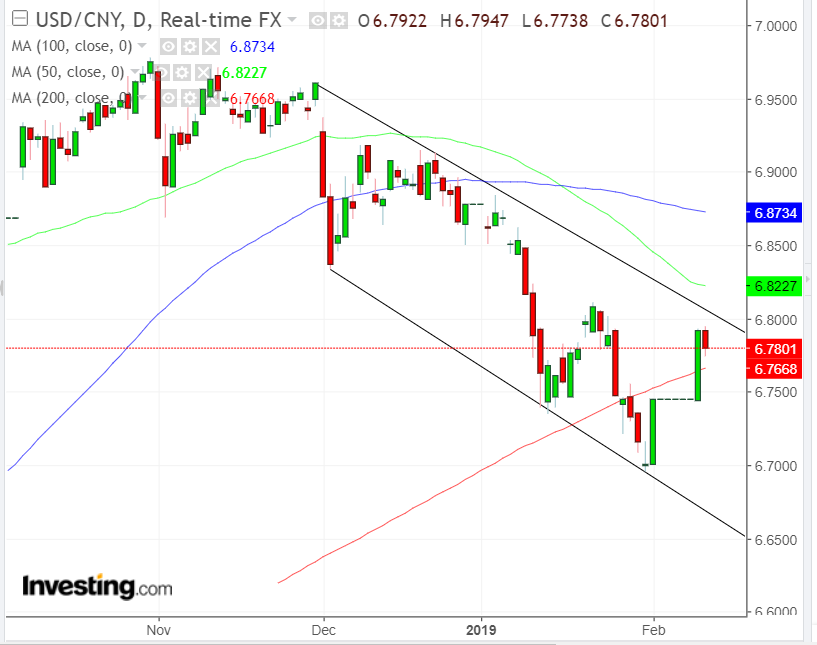 The USD/CNY pair bounced back from the 6.7000 levels, the lowest since July. The rebound brought it above the 200 DMA, but it stopped short of breaking out of its descending trading channel since it peaked in October. Also, after the 50 DMA crossed below the 100 DMA, it added to the channel top’s resistance, as it fell toward the 200 DMA.

The main question is whether the pair will bounce off it and climb higher, in a bullish stance, or slip below it. We believe trade negotiations will have some impact on that outcome, especially if China proves Trump right on currency manipulation. 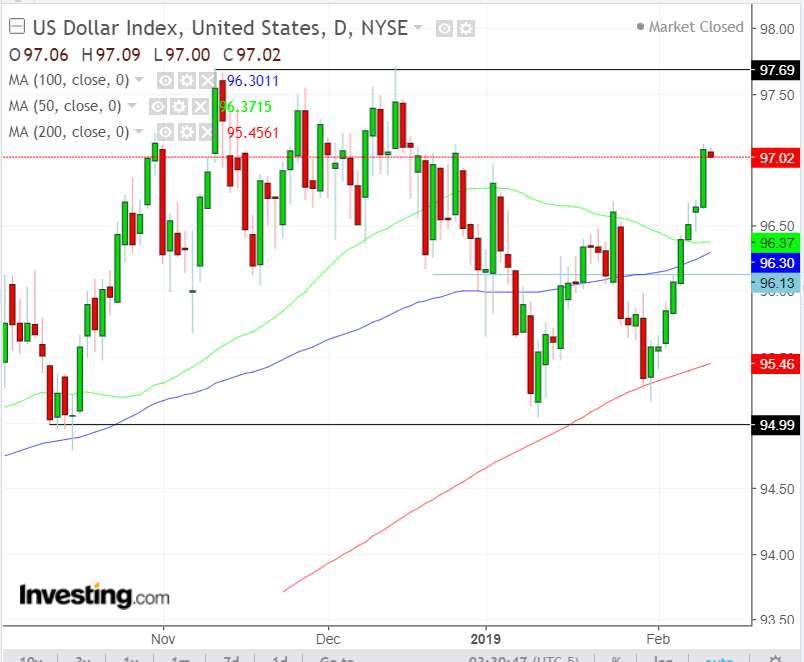 While the yield on Treasurys ticked higher for a second day as investors rotated out of safety and into risk, the dollar rebounded on the news of the U.S. government shutdown deal, sealing a ninth consecutive advance—its longest winning streak since January 2016.

The greenback has now reached the highest level since December 14, wiping out the losses that had been sparked by Fed Chair Jerome Powell’s comments that the central bank had arrived at the lower end of its neutral rate range. However, the Fed’s apparent dovish tilt should have sent the dollar further lower, not send it to its longest winning streak since January 2016.

Therefore, we maintain that except for today’s strength on the deal-in-princple to avert a shutdown, the USD’s overall unusual bullishness is not due to a reversal in outlook. Rather, it reinforces the view of a looming end to the longest bull market ever, as it stems from investors’ rotation out of equities and into government bonds: more than 40 percent of Treasurys demand stems from foreign buyers, who need to purchase the dollar in order to buy U.S. bonds.

A secondary tailwind for the greenback may come from the fact that central banks around the world have also paused their monetary tightening, making the Fed’s “patience” less dovish in comparison.

After having bounced off the 200 DMA for the first time since it crossed above it at the end of April, will the buck scale above the 98.00 levels, a resistance since the November peak, or will it retest the 95.00 level, a support since mid October?

In other FX news, the turned an early rally into a third-day decline ahead of U.K. Prime Minister Theresa May’s speech in the House of Commons on the progress—or lack thereof—of Brexit talks with the EU.

bounced back after suffering its lowest close in about two weeks, as, during yesterday’s trading, it formed a bullish hammer at the bottom of a short-term ascending channel since early January, which also neared the 50-DMA. After a forceful start to the year, oil bulls are now struggling to counteract the numerous headwinds at play.

While most of the biggest earnings results of the season have already been published, some reports coming out this week could still impact the broader market: