European stocks as well as futures for the , and came under pressure on Monday after waning expectations for a US-China trade deal weighed on Asian trade overnight.

However, both US contracts and the —which was weighed on by carmakers and bank shares—managed to bounce back, climbing into positive territory by late European morning. 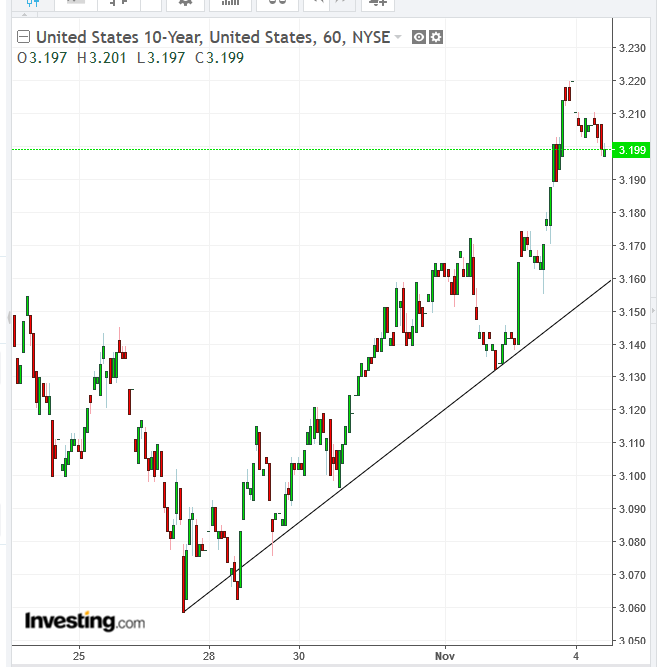 Investors bought into US Treasurys, probably motivated by ongoing equity declines and Friday’s strong monthly , which bolstered the case for the Federal Reserve to keep . The rotation pushed the yield on bonds into a short-term correction, below 3.2 but still well above the short-term uptrend.

On Friday, US stocks took a hit after the White House’s top economic advisor Larry Kudlow contradicted hints by US President Donald Trump of a forthcoming trade agreement with China. Despite losses on the last session of the week, the still managed to seal its best weekly performance in six months.

US companies, three quarters of which have already reported financial results, are on track for posting their fastest earnings growth in 8 years, thereby helping support the country’s upbeat economic outlook. (NYSE:) and (NYSE:), for instance, which are among the companies that reported results on Friday, confirmed the strongest quarterly performance in four years. After their respective releases, the stocks—as well as their dividends—may be even more attractive.

(NASDAQ:), which can be seen as a barometer of the broader tech sector universe, beat estimates and hit an all-time record on services revenues. However, the tech giant’s stock suffered its biggest selloff in four years on softer guidance. Does Apple’s slide signal a plateau in the market, as investor appetite for growth has become unrealistic? Or does it underpin a period of correction in an otherwise bull market?

Wall Street is sharply divided on the issue. While we have highlighted some glitches in the current equity market, we lean towards the latter explanation.

In FX trading, the is weaker against the dollar, as the greenback became the favorite safe-haven currency during trade jitters. The dollar is set to close at the highest level in almost a month.

In commodities markets, gave up early gains but remained in positive territory. 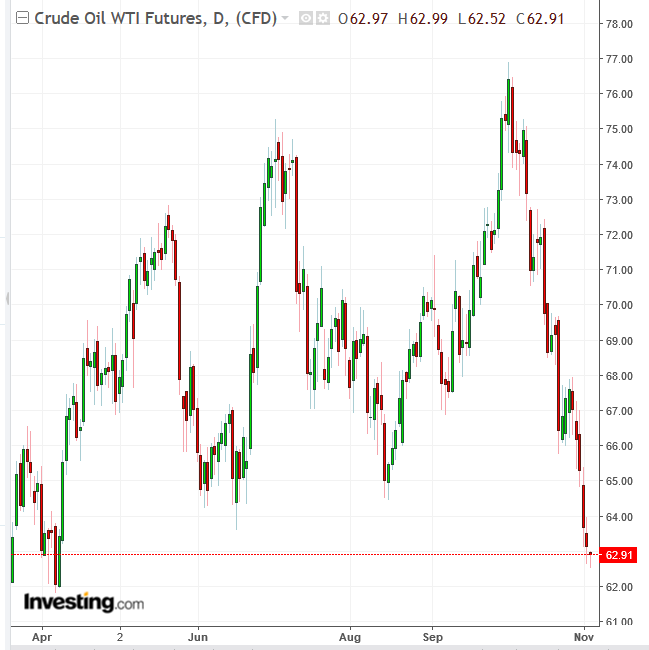 Conversely, kept falling for the sixth consecutive day, breaking below the $63 level for the first time since early April. A day after the official start of US sanctions against Iran, fears of a supply squeeze were eased by some waivers as well as comments by the Middle Eastern country’s President Hassan Rouhani that Tehran will shun restrictions and resume selling oil.