US futures on the , , and were trading in the red on Tuesday despite rising yields, and European shares on the were down over 1%, catching up with American tobacco companies which slumped yesterday on reports that the Biden Administration may cap nicotine levels in cigarettes.

On Monday, a Wall Street Journal report that “people familiar with the matter” said that the White House may impose nicotine limits in cigarettes sold in the US dented shares of Philip Morris International (NYSE:) despite the fact it neither sells nor markets cigarettes in America. The stock sold off 1.3%, nearly three times the decline in the , producing a bearish engulfing pattern.

Today, British American Tobacco (LON:) plunged as much as 7.25% on the London Stock Exchange, blowing up a bullish pattern. On the other hand, despite developing a powerful bearish engulfing pattern, , the company’s stock listed on the New York Stock Exchange, fell just 2.2% during yesterday’s Wall Street session and found support above its bullish pattern.

Investors are now focusing on the next catalyst, earnings. They want companies to show evidence of the economic recovery. IBM (NYSE:), which yesterday its first revenue gain in eleven quarters, did not disappoint.

Morgan StanleyWealth Management is telling its customers to hold on to all equities as it expects a powerful recovery. Lisa Shalett, chief investment officer said:

“This new business cycle is apt to be much different from its predecessor, with growth much broader and stronger, fiscal policy weighing heavier, inflation more resilient and credit growth resuming.”

She recommended procyclical trades in stocks and bonds while paring securities that are prone to risk.

Yields on the Treasury note are rising for the fourth day in a row, the most in six weeks. 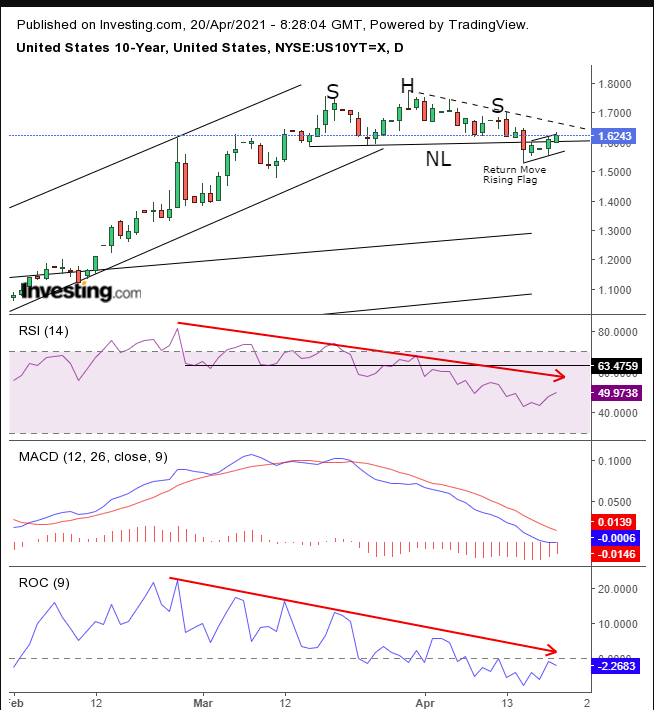 Rates are climbing within a congested rising pattern, fitting within a bearish flag, compounded by their placement, as they test the neckline of a H&S top, in a typical return move. As such we expect yields to fall again, below 1.500.

Rising yields failed to save the from extending a decline to the seventh straight day. 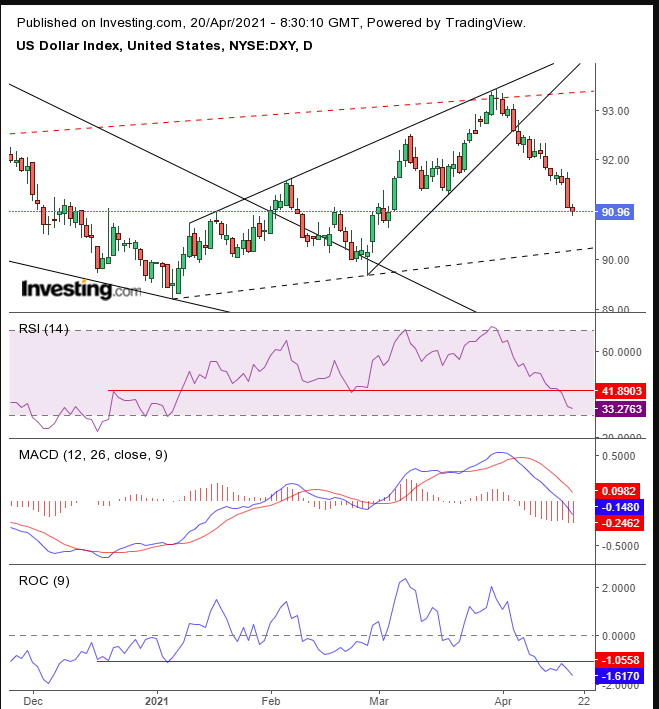 The greenback is following the completion of a bearish wedge, as it heads to retest what we interpret as a giant falling wedge since the March 2020 peak.

The dollar’s decline didn’t stop from falling on rising rates, which now provide a higher yield relative to the non-yielding precious metal. 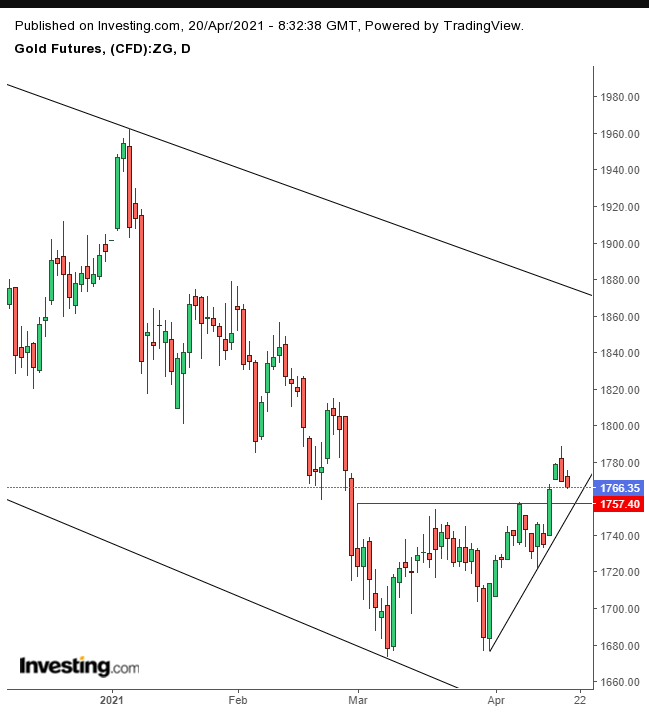 Technically, the precious metal is pulling back after completing a double top. Beware, however, it’s swimming against the steam of a falling channel.

fell for the fifth day, its longest losing streak in a while, after completing a rising wedge, bearish after the breathtaking 95% surge in just over a month. 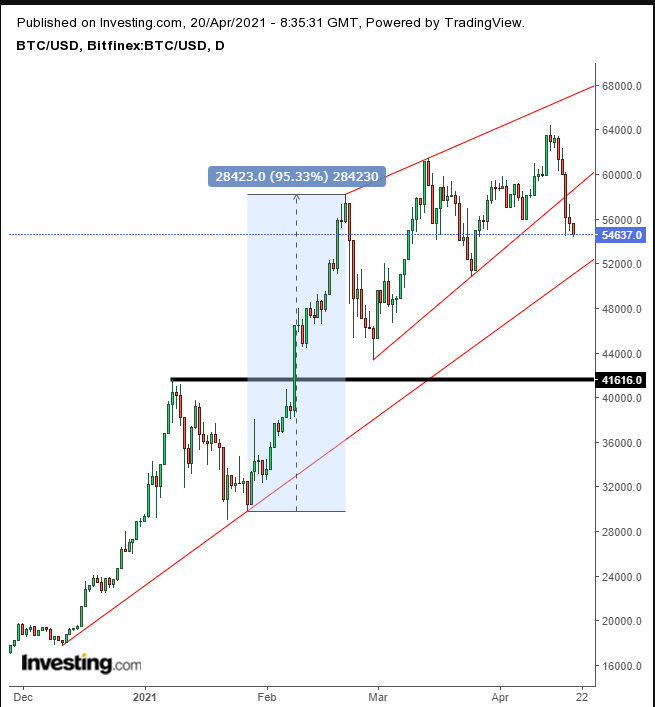 However, the cryptocurrency is set to retest the uptrend line since December 2020. 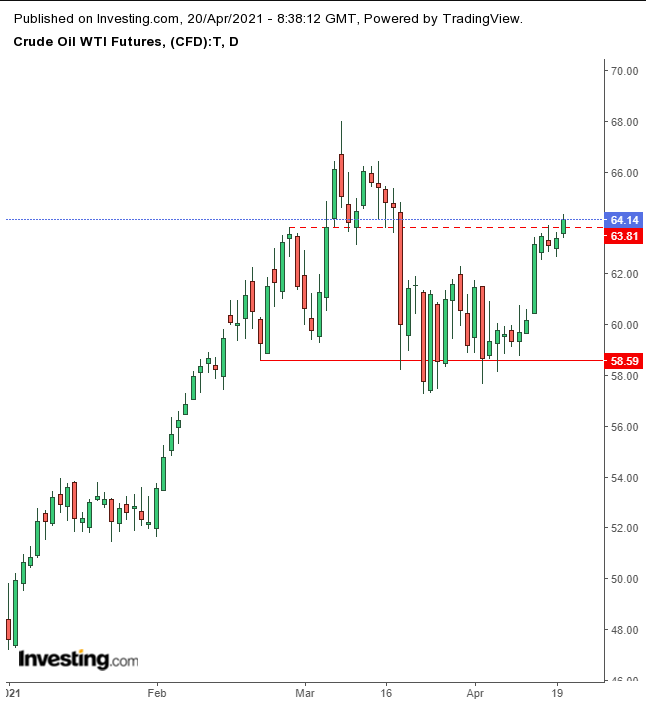 The greenback retested the level where the right shoulder of a H&S top could develop. However, oil could come under additional downward pressure if the coronavirus continues its aggressive spread across India and further lockdowns are required to stop the spread of the virus.