Shares in Europe edged higher on Wednesday morning after robust corporate results offset a global tech selloff triggered by inflation fears. All four major US contracts were in the red, with the small cap underperforming, followed by the tech-heavy .

Futures on the were also lower after the 30-component, posted the largest decline of all four US indices during Tuesday’s Wall Street session, dropping 1.4%. futures are also trading lower.

In Europe, the Index opened higher, rebounding from a near-2% plunge on Tuesday, as investors moved out of growth and into cyclical assets. Markets are refocusing their concerns on rising inflation, which would likely force the Fed to tighten monetary policy. Miners outperformed on the pan-European benchmark, on the view that as the economy reopens it will require materials to rebuild infrastructure and boost commerce.

Investors are eagerly awaiting today’s release of US for April, ahead of the US session open. Earlier this morning, ’s and ’s numbers met expectations.

UK listed-Diageo (LON:)—the world’s largest liquor maker—announced that organic operating growth will exceed 14%, and that it will restart its capital return plan thanks to a strong US-led recovery. The stock jumped 3%, coming within a whisker of its highest level since October 2019.

Asian stocks fell to their lowest in seven weeks, as traders shied away from over-extended valuations in the face of the current view of spiking inflation amid surging commodity prices, including record prices for and .

MSCI’s of Asia-Pacific shares outside Japan slumped 1.5% to its lowest since Mar. 26, adding to Tuesday’s 1.6% loss with all major indices under heavy selling pressure.

Taiwan’s index plunged 4.1% from all-time highs to levels seen in February on fears the country may raise its COVID-19 alert level in coming days, which would lead to the closure of non-essential retail, as infections there rise.

Yesterday’s selloff on Wall Street was led by all the sectors that benefit from a restarting economy—energy, financials and industrials. On the other hand, the tech-heavy trimmed 2% losses to less than 0.1%, demonstrating that dip buyers remain in the game even as the debate continues over whether the expected jump in prices will persist, forcing the Fed to contradict its oft-repeated promise of maintaining its overly generous policy.

Refinitiv IBES data sees US earnings catapult 90.2% in the first quarter, an upgrade from the previous 83.1% forecast last week. After the recent earning season, investors may believe that there is still some share price growth not already priced into stocks.

Fed Governor said policy makers must show continued patience, as distortions in the post-pandemic boom sort themselves out, adding that the economy is still far from the central bank’s objectives.

Wednesday’s US inflation report along with a series of US government bond auctions this week are seen as the next factors to deepen or arrest the equity market slide.

Meanwhile, yields, including on the Treasury note, have been attempting to return to an ascent. After topping out they have started a falling channel.

Traders’ views on inflation remain unpredictable. If today’s CPI shows an increase, they could either sell the on its lower buying power, or buy it on expectations of a rate hike. The USD deeply trimmed an advance after finding resistance by the broken uptrend line since the Jan. 6 bottom. We’ll keep holding out for a potential rebound, until that bottom is broken, in which case, it will likely spark a freefall, which can be as steep as to the 2014 lows.

was down for the second day, beneath the top of its falling channel. 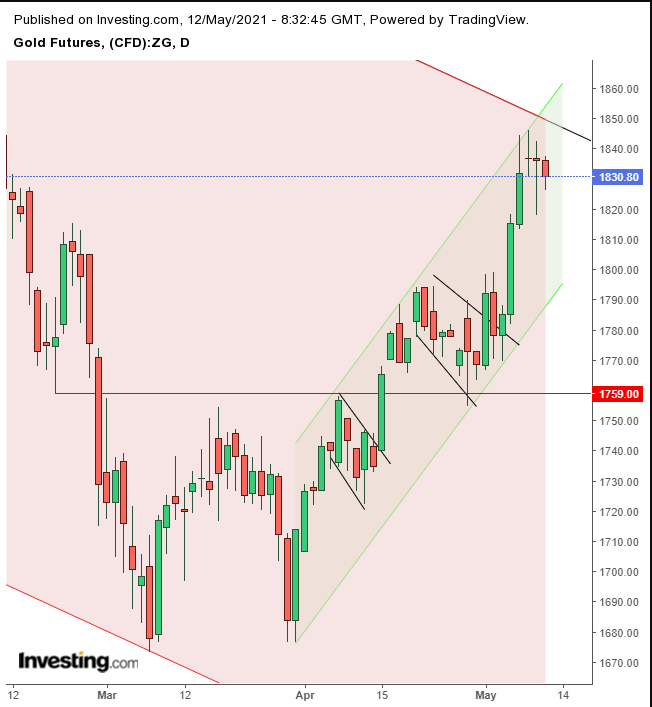 Should CPI reinforce the inflation narrative, gold could break out of its bearish trajectory. 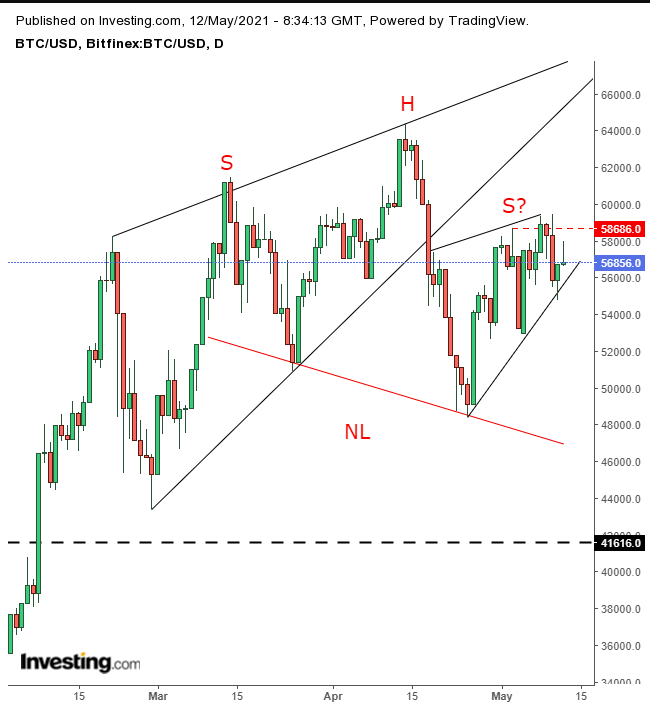 The cryptocurrency may be set to complete a second consecutive bearish wedge and the making of the right shoulder of a H&S top, whose downside target points at the low $30,000 levels.

was stable above $65 per barrel amid dollar weakness and the return of the reflation trade. The biggest US pipeline remains closed in the wake of a cyberattack last week which is leading to acute fuel shortages in some parts of the nation. 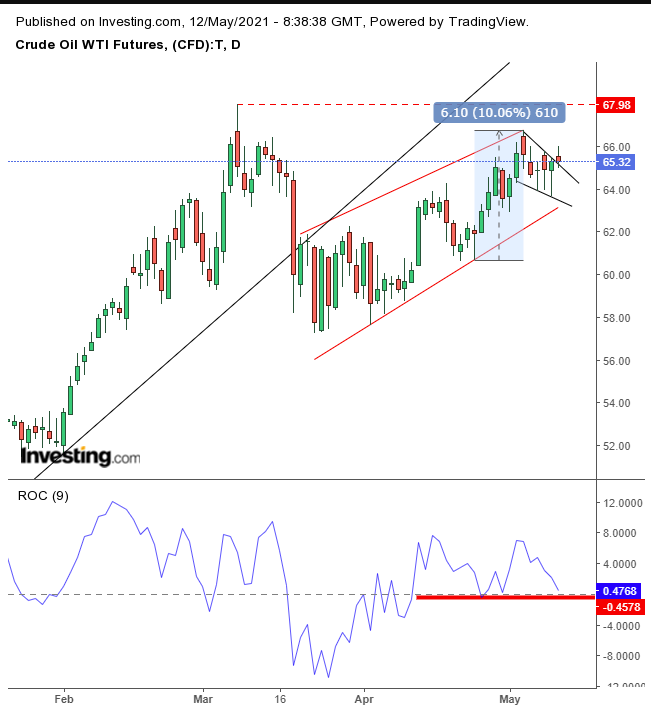 The price of oil may have completed a falling flag, bullish after the preceding 10% advance in just 9 sessions. We see the flag as a clear illustration that early bulls are taking the opportunity to cash out and new bulls are coming in as they take on the Mar. 8 peak. However, keep an eye on the sensitive ROC which gauges momentum. It could be forming a double top. For confirmation, wait for a decisive upside breakout of the flag.