US futures for the , , and started the trading week off  higher, while European stocks fluctuated, after a mixed Asian session on Monday. Market indecision is being driven by off-again, on-again concerns of rising inflation and uncertainty about the timing of the Fed’s stance on how transitory the economic phenomenon might be and the timeframe for tightening of the loosest monetary policy in history.

Travel related shares plummeted following a spike in the number of COVID cases in Asia. The dollar was little changed.

Contracts on the S&P 500 extended the best weekly advance of the index since February, but contracts on the NASDAQ doubled their gains. However, futures on the small cap Russell 2000 and, at time of writing, the mega cap index, were in the red.

The the pan-European Index wobbled between gains and losses, as an advance in chemical stocks offset a selloff of travel stocks, as the highly contagious Delta variant threatens to derail summer travel in Europe. 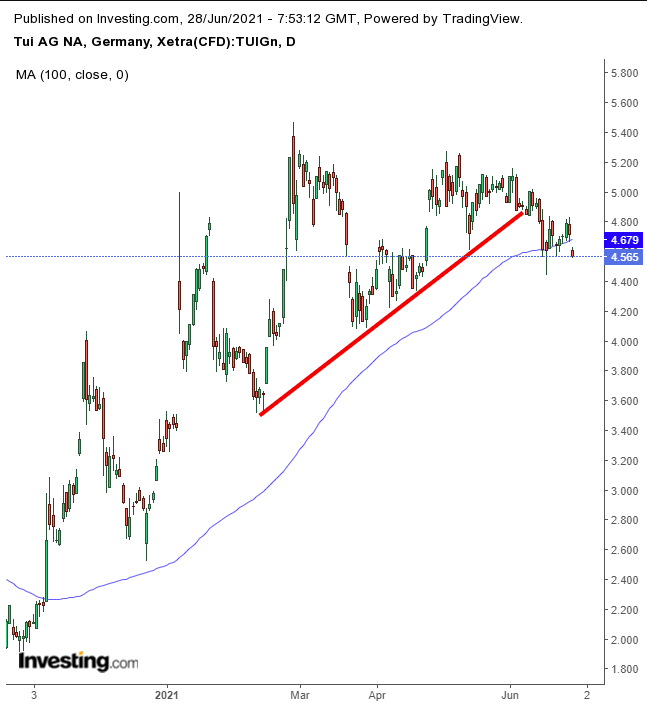 The Hanover-based firm may have completed an upsloping H&S top, followed by a fall below its 100 DMA, for the first time since crossing over it on Nov. 9. 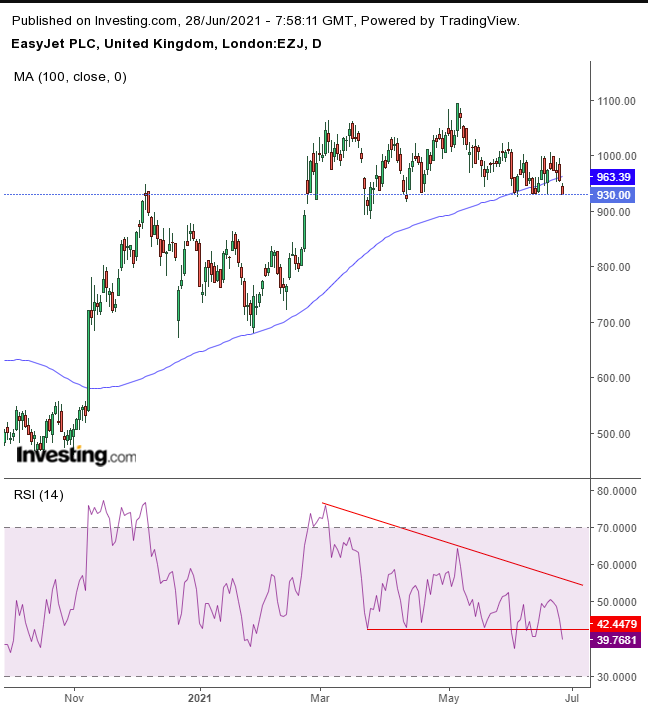 The low-cost British airline firm may be forming a H&S top, while—like TUI—it crossed below the 100 DMA after climbing above it on Nov. 9. The RSI has provided a negative divergence, falling while the price climbed from May 3 to May 7, suggesting the stock will top out.

On Monday, weekly trading started with a cautious tone in Asia, after the number of COVID cases in the region escalated over the weekend, leaving stocks in a holding pattern till the next catalyst, ahead of a slew of data from the US this coming week. Japan’s , China’s , South Korea’s and Hong Kong’s all closed marginally lower this morning.

Yields, including for the benchmark Treasury note, were lower for the day, along with the risk-on appetite. 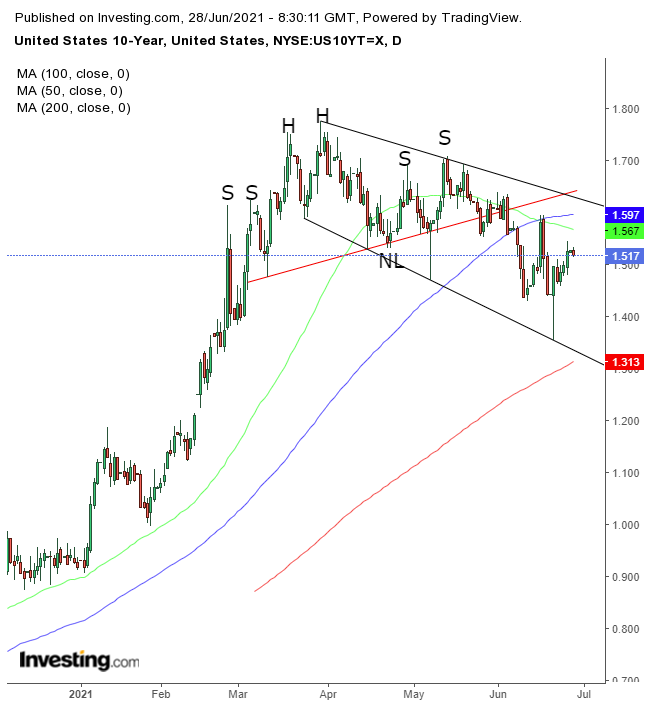 Rates have been falling since the Mar. 30 peak. Having completed a H&S top, they are now extending the downtrend within a falling channel. The 50 DMA has already crossed below the 100 DMA, but the 200 DMA, supporting the channel, will be the next real test.

If yields turn around, it could pull cash out of the stock market, attracting investors looking for higher yields and the security Treasuries provide. For now, though, investors seem to be focusing on the economic rebound.

The slipped within a range, wavering for a fifth day, supported by the 100 DMA.

tested the bottom of a rising channel, bearish after the preceding near-7.5% plunge within six sessions. 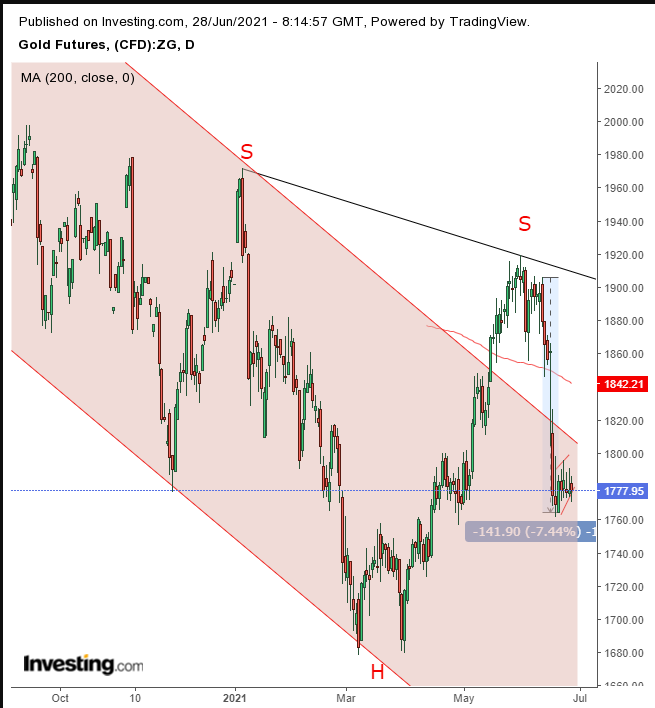 This suggests a resumption of the falling channel, rather than the completion of an H&S bottom. 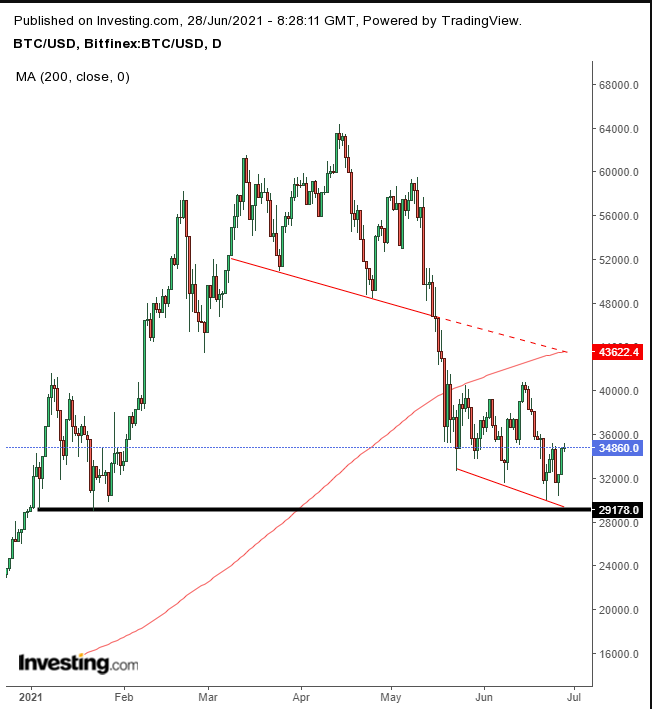 However, the cryptocurrency’s moves are developing into a H&S continuation pattern, whose neckline meets with the $29,000 major support. Note, the 200 DMA is curving downward after meeting the extended H&S neckline completed on May 15, suggesting the trend could be headed lower.

found resistance at the $74 level, near the 2018 highs, ahead of the July OPEC+ Meeting. 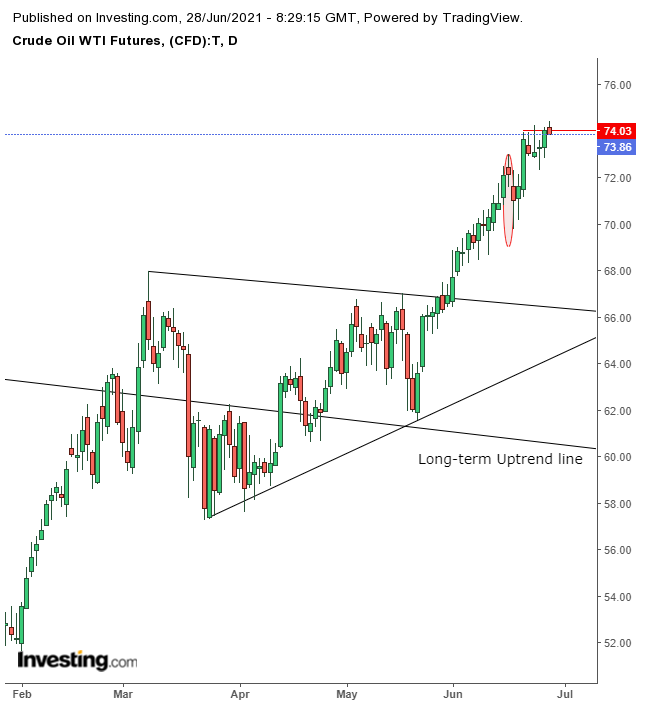 The price of WTI has found resistance at this level for the past six sessions—matching gold’s recent selloff—after having blown out an Evening Star (circled). Traders are waiting for a catalyst, to know whether crude will fall back toward its bullish triangle or take out the 2018 highs before reaching 2014 levels.