The pendulum on whether inflation is a concern for markets or not continues oscillating. Global indices on Tuesday all advanced, with futures on the , , and all moving higher ahead of the US session open. European shares were also trading in the green as markets seem to have moved past worries about US inflation or the increase in coronavirus cases in Asia.

Futures on the tech-heavy NASDAQ 100 outperformed this morning after technology firms weighed on markets yesterday.

European shares listed on the Index headed toward all-time highs on positive sentiment as countries across the Eurozone eased economic restrictions, UK figures slid and a number of corporates reported robust results.

Reflation sectors, including automakers and miners, outperformed, resulting in the pan-European benchmark trading briefly above its May 10 record close.

Stocks in Asia climbed as dip buyers shrugged off rising virus numbers in the region. Japan’s (+2.1%) outperformed, even after the country’s economy , -5.1% annually because of lockdowns in the last quarter. Still, traders didn’t flinch. The figure was in line with expectations, and conditions there are not expected to improve imminently.

Here is another example of how expectations, not fact, move markets: Asian assets are rallying despite the latest surge in COVID-19 cases in Japan, Thailand and India. China’s lagged, up just 0.2%.

American equities declined on Monday during the Wall Street session, ending a two-day rally. The —the index that best represents growth stocks—declined by 0.6%. The next decliner was the with less than half the losses, slipping 0.25%. On the other side of the cyclical rotation, domestic firms listed on the advanced 0.1% as the only benchmarke finished in positive territory.

We can see the same pattern among the S&P 500’s sectors.  and  were among the worst performers, while  catapulted 2.3%, followed by  (+0.9%) and  (+0.2%)—obvious reflation sectors.  (-0.8%) were, in fact, the underperformer, but that only demonstrates that investors were confident enough to reroute funds out of havens and into risk, despite the technology selloff—a healthy sector rotation.

The recent whipsaws we have seen in markets are likely to continue as views from investors, including the Oracle of Omaha, Berkshire Hathaway’s (NYSE:) Warren Buffet, continue to contradict comments from the Federal Reserve that interest rate hikes are unlikely any time soon. These opposing opinions have been exacerbated by recent economic data including figures as well as rising commodity prices.

While yields on the Treasury note were flat, the extended a selloff to its third straight day, the longest losing streak for the global reserve currency since May 10. The USD plunged to its lowest level since Jan. 6. 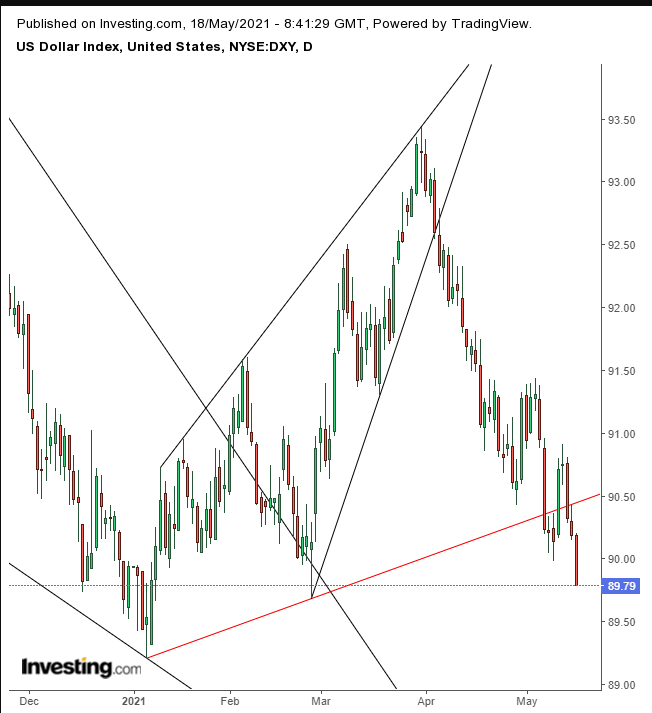 The dollar destroyed the uptrend line since the Jan. 6 low, as it takes on the support of the recent bearish wedge, which was a correction breaking out of a massive wedge since the 2020 peak. We interpreted this as bearish. If the greenback falls below the Jan. 6 bottom, it will violently push the currency lower. On the other hand, from a risk-reward perspective, this presents an ideal long position.

Not waiting for the dollar to break through its bottom, has already broken through the top of its falling channel. The moved follows a falling flag, bullish after the preceding jump. 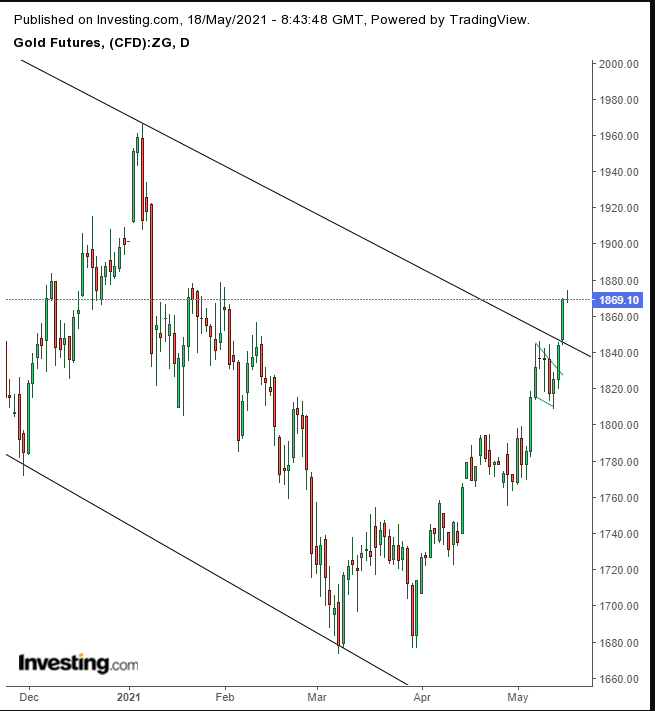 We are extending our short-term bullish view, made after the yellow metal double-bottomed on Apr. 15. Note however that we warned that such a position would be contrary to the medium-term falling channel. We stand by that as well.

found support at the Mar. 1 low. 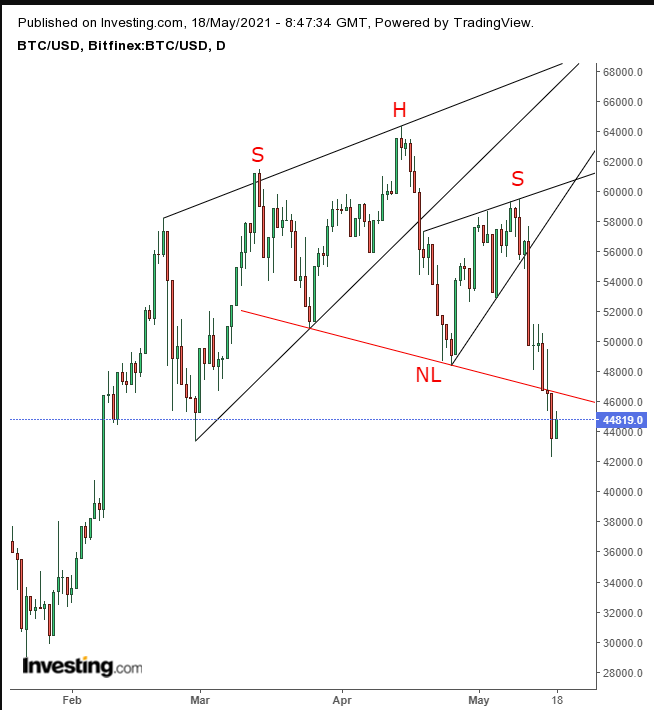 Having reached the low $40,000s, which is more than a 25% drop in value, the cryptocurrency fulfilled the first, larger wedge’s target, but Monday’s selloff completed a H&S top, which targets the low $30,000s.

The rising optimism of a recovery in the US and Europe is improving the  demand outlook and boosting the price for the third day. 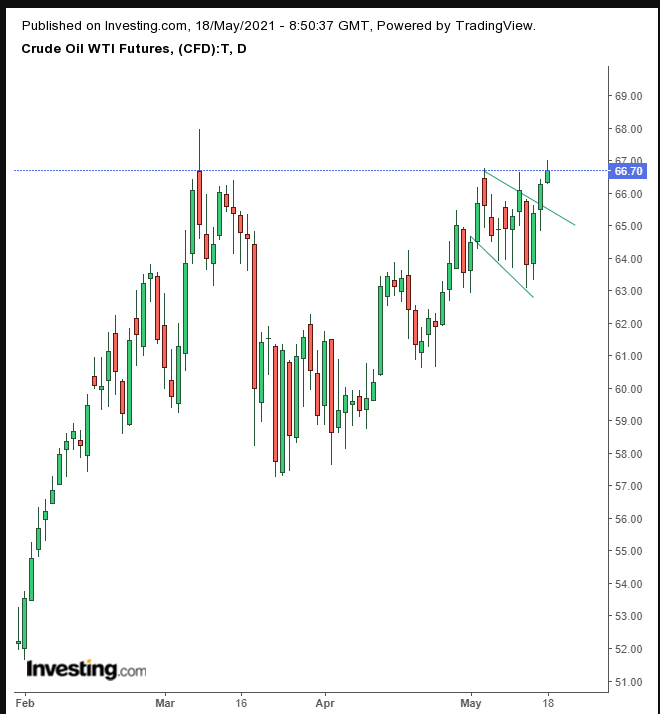 Crude completed a falling flag, which often takes place before an important resistance is breached, which traders’ wish to overcome. The flag’s implied target will push the price above the Mar. 8 high, to the highest level since October 2018.