US contracts on the , , and all jumped on Thursday, along with European stocks as traders decided to ignore the Fed’s inflation debate—and what it might mean for monetary policy—opting instead to stick with the recovery narrative, ahead of a slew of US data, including GDP and Initial Claims, to be released later today.

Yields have been rising and oil climbed.

S&P 500 futures accelerated overnight, even after the underlying fell during Wednesday’s Wall Street session. But the contracts hit a snag toward the end of the Asian session, though they found new life with the European open, reaching their highest level since its June 14 record. 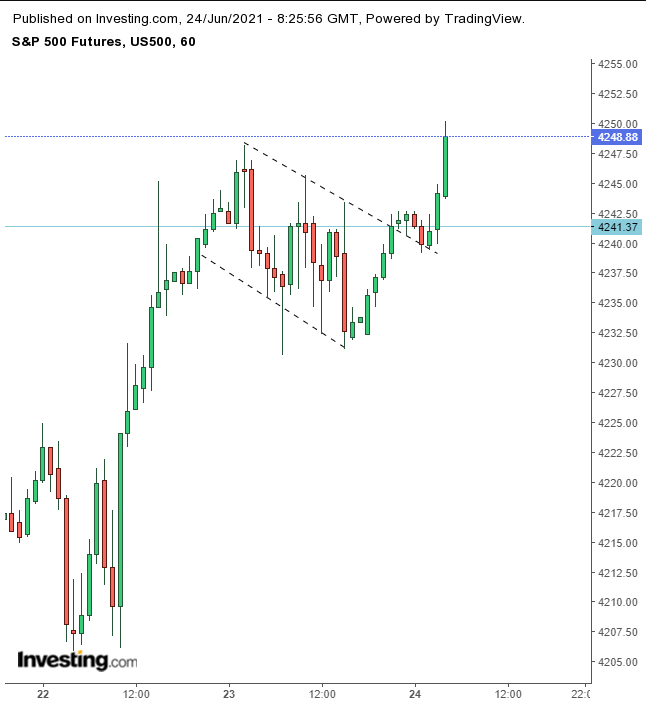 The futures completed a falling flag, bullish after the preceding sharp rise, having provided an upside breakout, a pattern retest, and a new high. The flag could provide the contract with sufficient momentum to strike a fresh record.

The Index rebounded from yesterday, lifted by banks and retail stocks, including automobile producers. The pan-European benchmark was unchanged earlier in the week as confused traders were looking for direction, not knowing what to make of the Fed’s mixed messages on inflation and its effect on the recovery.

Earlier this morning, the Asian session was listless as investors remained cautious ahead of today’s US data. Tokyo’s and China’s treaded water. South Korea’s and Hong Kong’s edged higher.

Australia’s was the only regional benchmark to finish in the red, -0.2%, pressured by a double-digit rise in COVID cases amid an outbreak of the delta strain, threatening renewed lockdowns.

Yields, including for the benchmark note, have been rising for four hours, completing a bullish pattern This not only reflected but threatens to move the trajectory of interest rates. 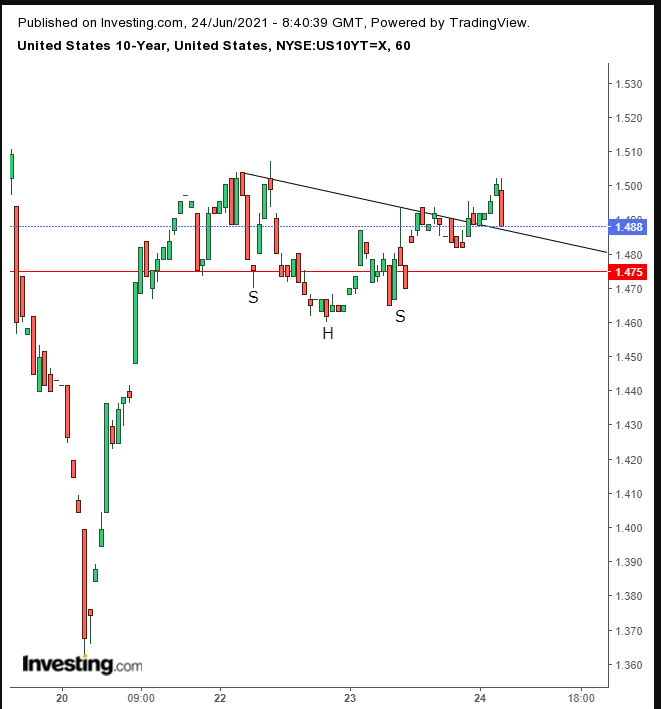 Rates have completed an hourly H&S continuation pattern, supporting the bottom of a larger bottom. 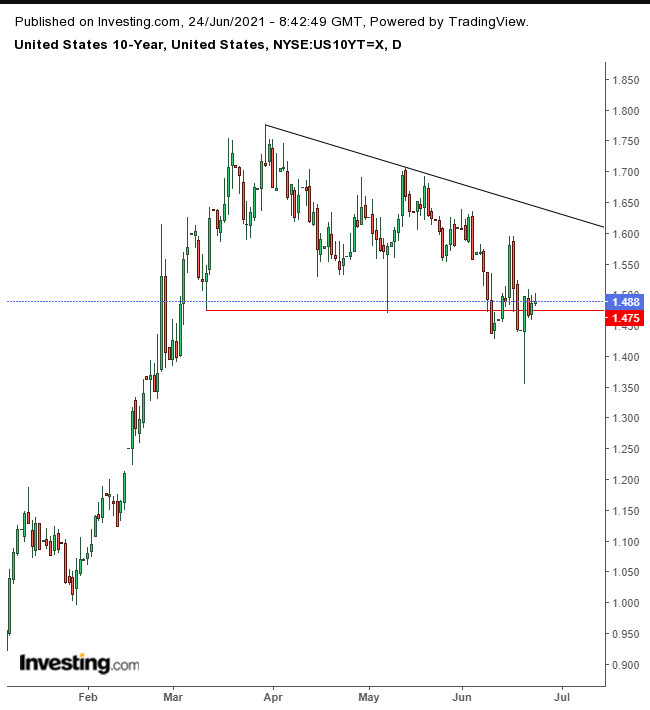 Now, the price is struggling against the bottom of a descending triangle, a pattern that demonstrates that Treasury demand is overtaking supply. A downside breakout for the Treasury yield would likely boost the sovereign bonds further, pushing the yields lower still.

The is down for the day. 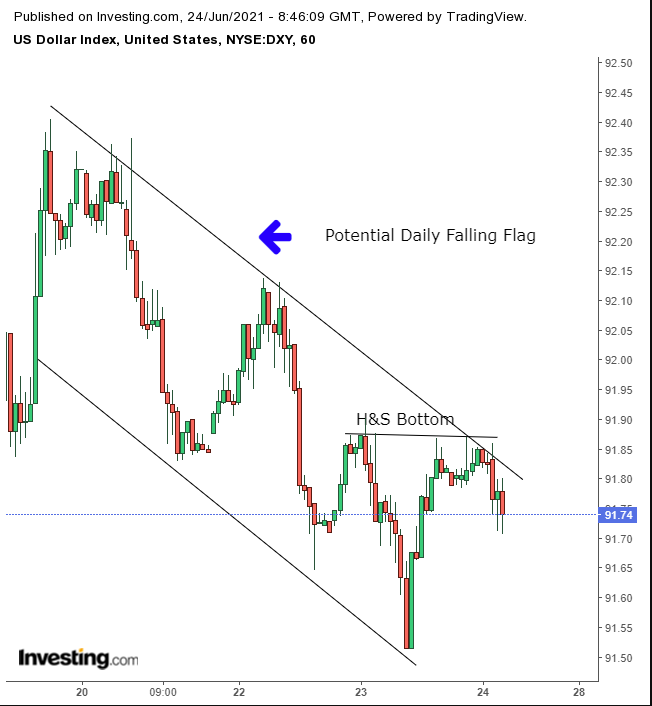 The USD might be producing an hourly H&S bottom, which would help it complete a falling flag, bullish after the preceding nearly 3% jump in a week.

could be forming a rising flag, bearish after its 7.6% crash in a week. 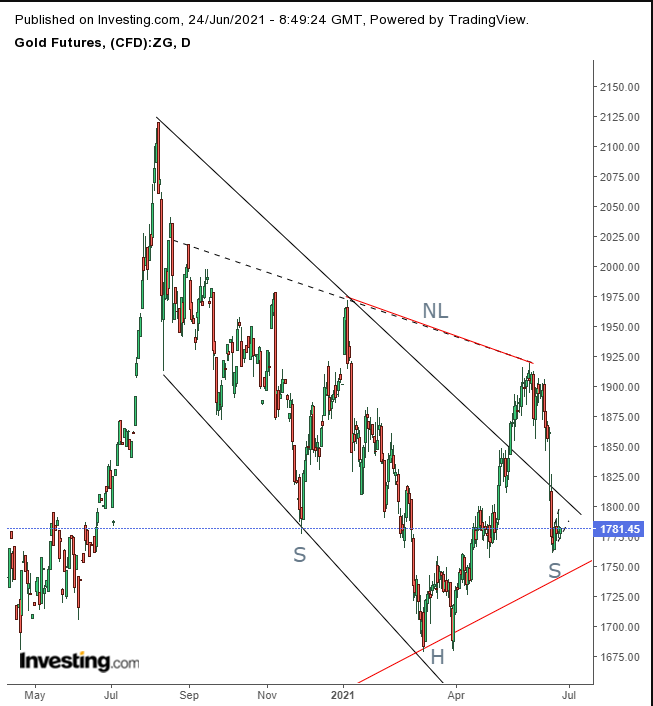 The precious metal is nearing a long-term uptrend line, and might also be forming the right shoulder of a H&S—after having returned into its falling channel since the August record high.

retreated from a two day rebound. 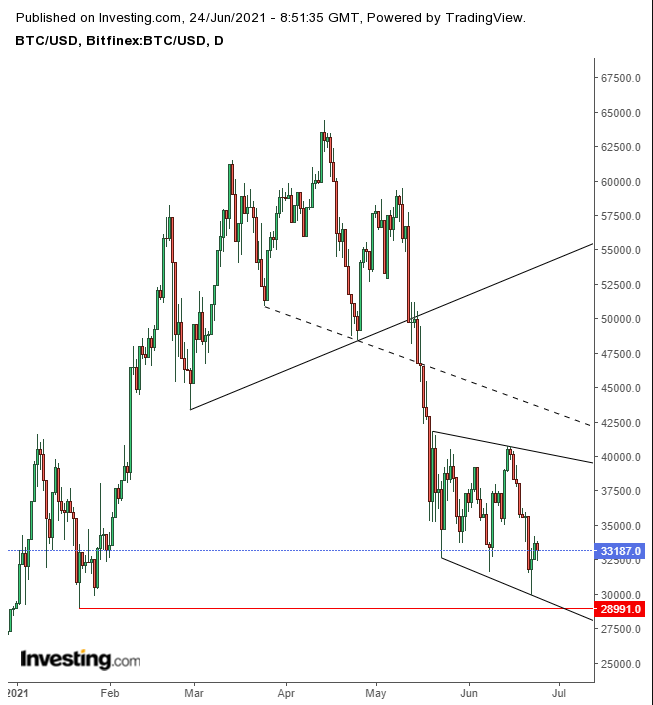 The cryptocurrency is likely to meander as long as the inflation debate endures. We can see it ranging with a downward tilt, after having topped out. A fall below $29,000 will likely see a continued downtrend.

climbed for the second day on shrinking , after the EIA released data showing last week saw the fifth week of drawdowns. 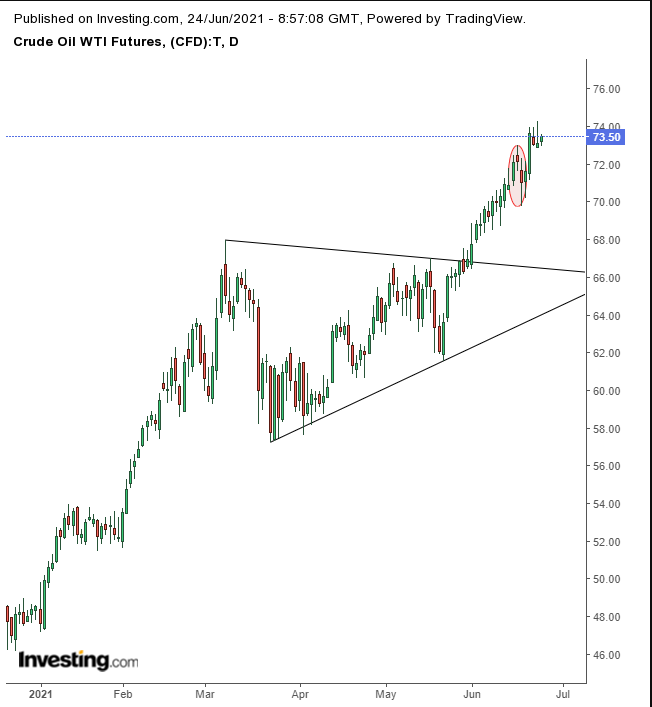 WTI has been struggling after clearing an Evening Star, as the price mostly actualized a bullish triangle’s implied target. Two catalysts continue to fuel this rally.

Bank of England is scheduled to issue an Thursday.

Also on Thursday, the Fed releases the results of on the largest U.S. banks

On Friday, U.S. personal and , as well as are announced.