The first full trading week of May opened in the red on Monday. US futures contracts for the , , and each dropped around 1% or more, European shares are significantly lower and Asian markets all closed down this morning.

The reason? A between the US and China over the possible origins of the cornonvirus, which could rekindle trade tensions between the world’s biggest economies.

Yesterday, echoing President Donald Trump’s bellicose accusations, US Secretary of State Mike Pompeo charged that COVID-19 originated in a Wuhan, China lab. He also said that the Asian nation’s government wasn’t cooperating on information-sharing to help create a vaccine. This was a clear extension of Trump’s trade war revival threat from last week; there was even talk about America deleting its Chinese debt.

The world’s largest economies appear to be headed toward a cold war, which begs the question: can the US actually afford a cold war with China, the place where so many components of American corporate manufacturing are sourced?

Additional concerns are equally germane. Is the US consumer prepared to refrain from buying cheap goods imported from China? Can China withstand the potential loss of demand?

Which leads to one wondering, who has more power in this supply-demand equation? Last year, big American companies were already in search of new, inexpensive regional locations from where they could manufacture their goods, as the US-Sino trade war escalated in 2018-2019.

If current tensions continue to escalate, there might be another seismic shift in global commerce on the horizon that would restructure the business landscape.

As of early Monday, all four major US contracts are down, having been ranging for the past six hours, after rebounding from a lower open. 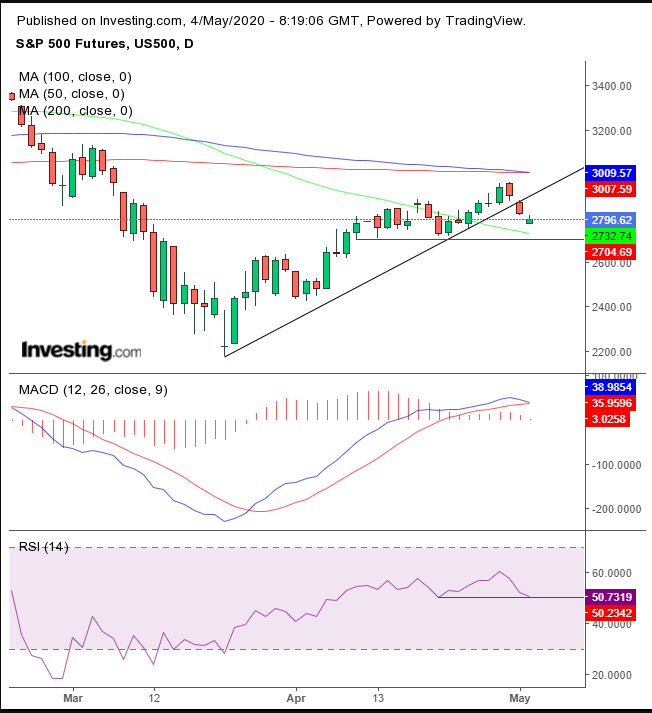 S&P 500 futures fell for the third day, extending Friday’s penetration of its uptrend line since the March 23 bottom. A fall below 2,700 would be the second trend reversal confirmation, which would include sell signals from the RSI and MACD.

The dipped this morning, pressured by all 19 industry sectors. It’s the pan-European’s third consecutive decline, pushing it below its uptrend line—guarded by the 50 DMA—since the March bottom.

Asian indices took the biggest hit, however. Hong Kong’s plunged the most in six weeks, (-4.5%), as investor sentiment suffered ahead of the special administrative region’s Q1 , seen to have been decimated by the coronavirus. Chinese and Japanese markets were closed for holidays.

Yields, including for the benchmark Treasury, fell to the lowest since April 23, on a daily basis. 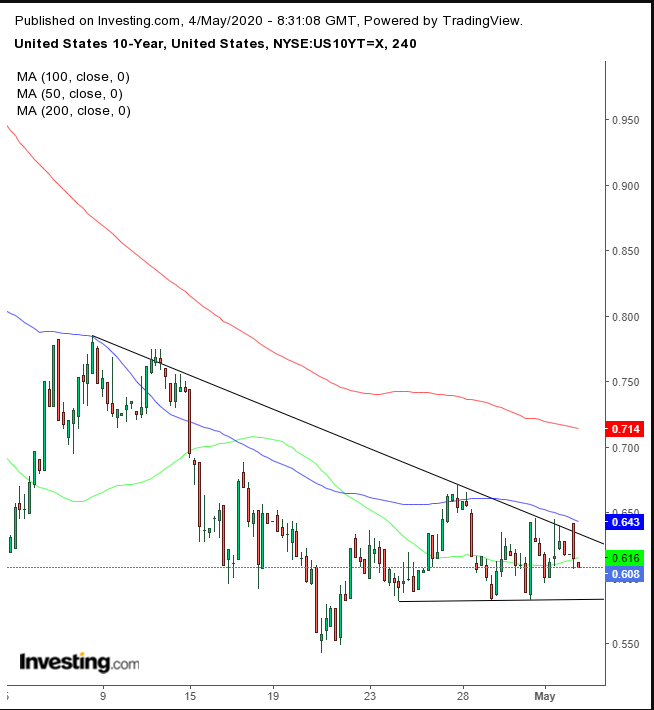 On the four-hour chart, rates may be developing a H&S continuation pattern that would extend the downtrend. 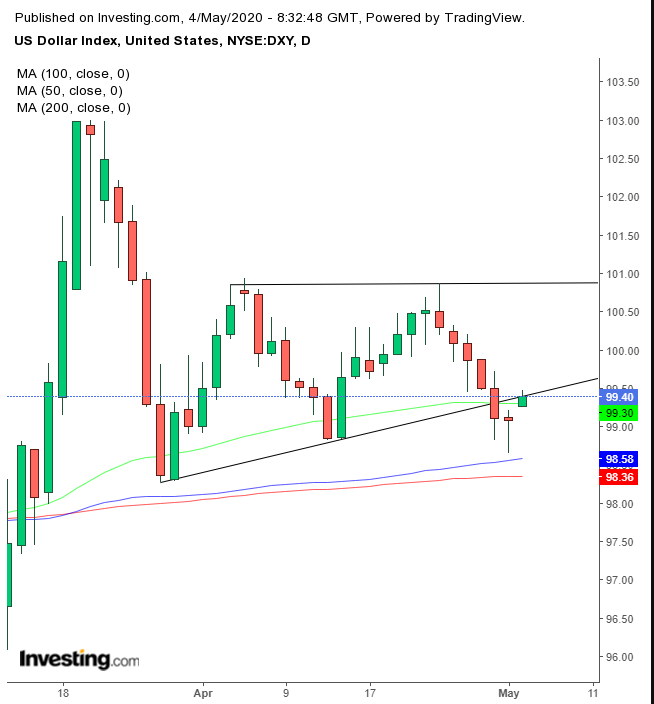 However, it found resistance at the bottom of a counterintuitive ascending triangle that developed after a fall rather than a rise. 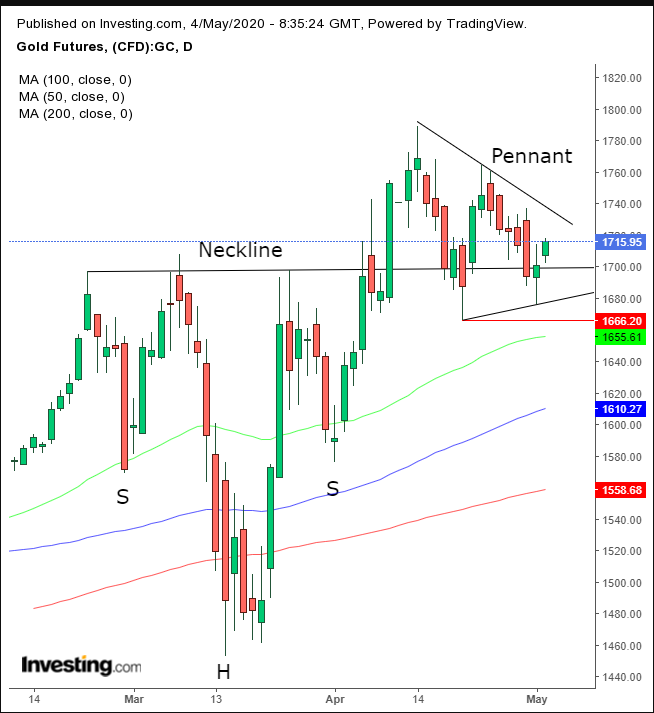 jumped, despite being weighed down by a stronger dollar, confirming that the precious metal is developing a pennant, whose continuation characteristics would support the H&S continuation pattern that preceded it. Note, the pennant is complete upon an upside breakout, which also generally pulls the price back to retest the pattern’s integrity. 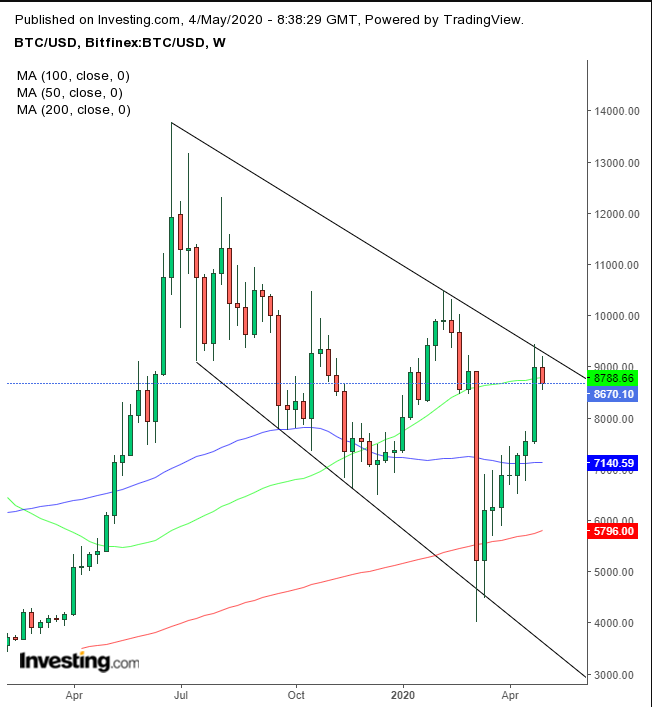 fell for the second day after slightly penetrating the top of a falling channel since the June 25, $11,780 high and retreating, confirming its resistance. The supply-demand dynamics of the falling channel suggest a return to $4,000, the March lows. 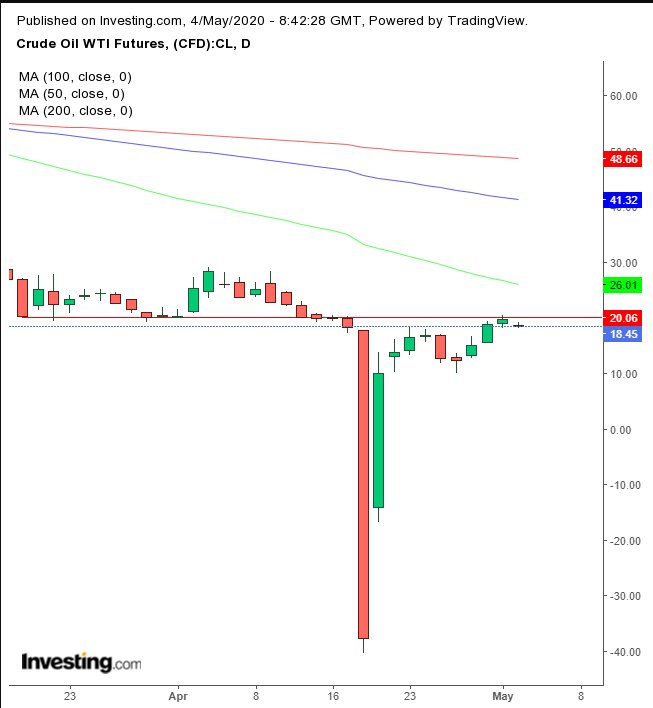 There is an argument to be made that “a major bull run is forming in oil markets,” but until that happens, we remain bearish. The $20 level is our red line. The price tested that resistance on Friday but closed below. Today, the price continued to decline.