Though U.S. futures for the , and , as well as Asian indices, opened higher on Thursday after yesterday’s strong Wall Street performance, contracts on the major U.S. benchmarks have now slipped lower. European shares, though still in the green at the time of writing, are also wavering, pressured by of eurozone and PMI numbers which all dropped. The services release was especially abysmal across the region.

Investors are now bracing for today’s U.S. data. As of last week’s report, a total of 22 million Americans had filed unemployment claims over a three-week period; after today’s print it’s expected that number will climb to more than 25 million. As well, the number of reported, global COVID-19 cases continues to grow, currently topping 2,637,000 with close to 48,000 fatalities in the U.S. alone.

WTI extends a rebound from unprecedented negative prices earlier this week. The commodity has been fluctuating around $15.

While optimism among American investors over the past few weeks gave birth to a new bull market in record time, never-before-seen negative oil prices along with worries about the unpredictable results of this current earnings season after coronavirus shutdowns, paint a different picture.

Though may currently be trading higher, the extreme volatility seen over the past few days . 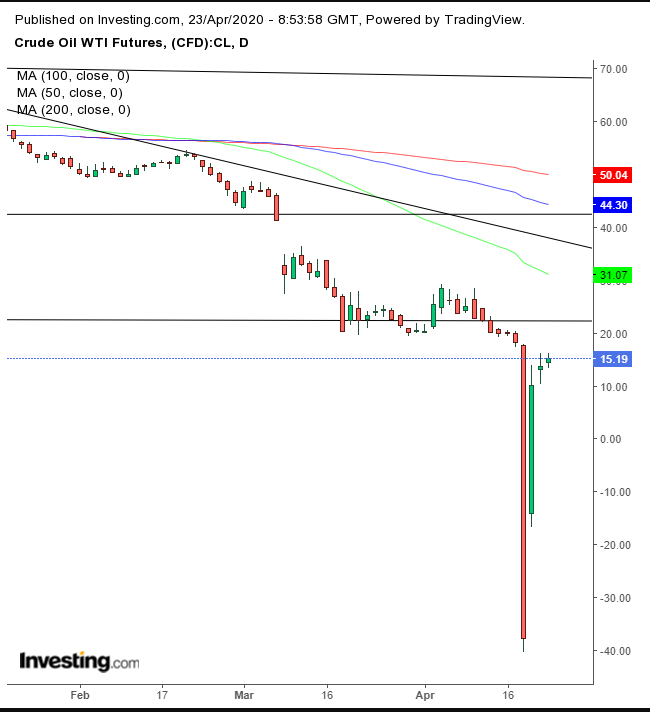 With prices currently hovering around the $15 level, we expect the $20 mark to provide staunch resistance.

Also, the gave up an advance after Swiss investment bank Credit Suisse (SIX:), during today’s , disclosed more than $1 billion in writedowns and provisions for bad loans due to the pandemic, offsetting its profit growth.

Earlier Thursday, Asian stocks finished mixed: Japan’s outperformed, (+1.52%) while China’s lagged, (-0.19%). Technically, most regional gauges have been developing patterns which have been congesting as they move higher, possibly forming rising wedges which are bearish after the preceding dramatic plunge.

The only anomaly is that this presumably bearish pattern developed along with the “fastest recovery in history.” Or could it be a classic ‘bear trap’ fueled by stimulus steroids?

Yesterday on Wall Street, American shares ended a two-day selloff. Bulls appeared to be feasting on the usual fodder of Trump administration optimism on the reopening of the economy and corporate results that were not uniformly dismal. Or at least not yet.

The bounced back from the worst decline in three weeks, as the not-as-bad-as-we-expected earnings results swung the pendulum of sentiment to the positive side. 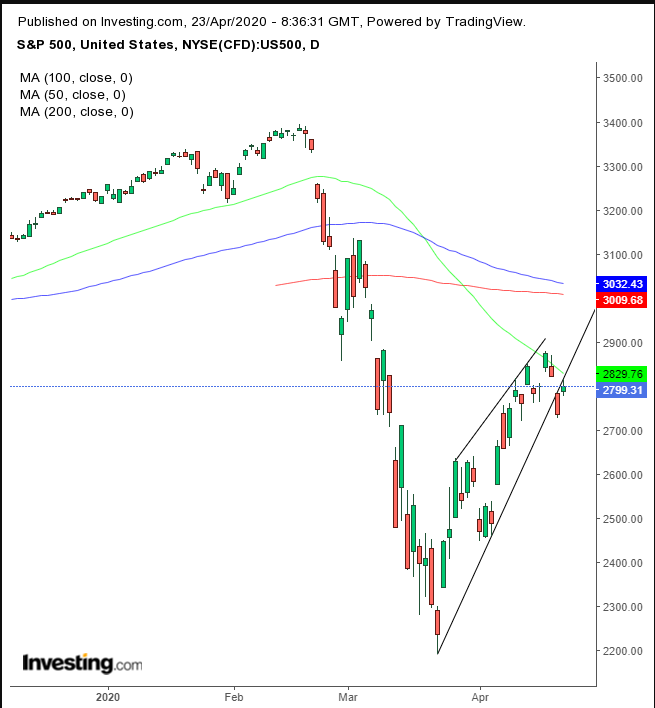 The index rose to 2,799.31, gaining 2.3%. From a technical perspective, however, trading developed a weak candle stick, which failed to climb back above its uptrend line from the March 23 bottom. In addition, the same uptrend line might be the bottom of a slim rising wedge, a pattern presumed to be bearish as traders lose patience when prices don’t keep up their earlier velocity. Note, the 50 DMA—which recently fell below the 200 DMA, triggering the nefarious Death Cross—stopped prices in their tracks.

Yields, including for U.S. Treasury, drifted and the was flat, as bulls took a breather after a three day advance. 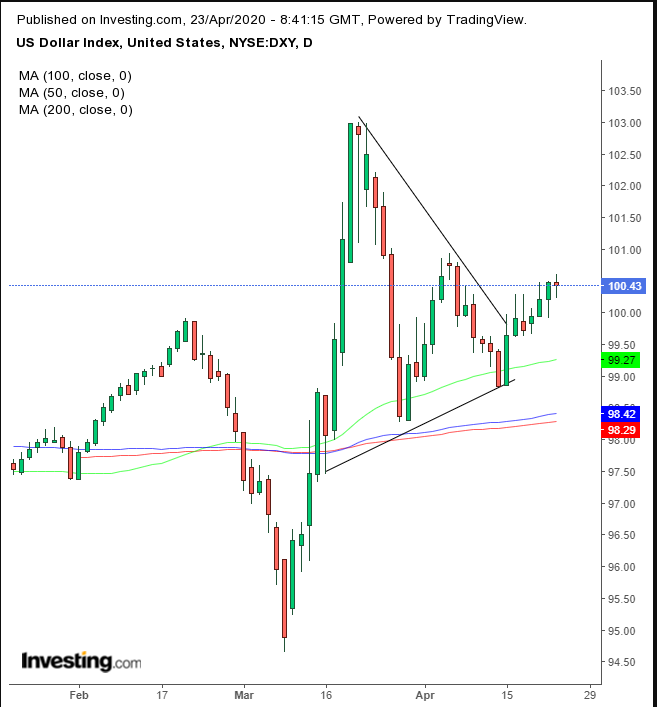 Technically, it appears as if the greenback completed a symmetrical triangle. However, its exit via the apex—rather than an earlier outbreak—diminishes the view that bulls are resolute. This leaves technicians waiting for further clues to determine the supply-demand balance.

bulls, though, left markets with no uncertainty today. 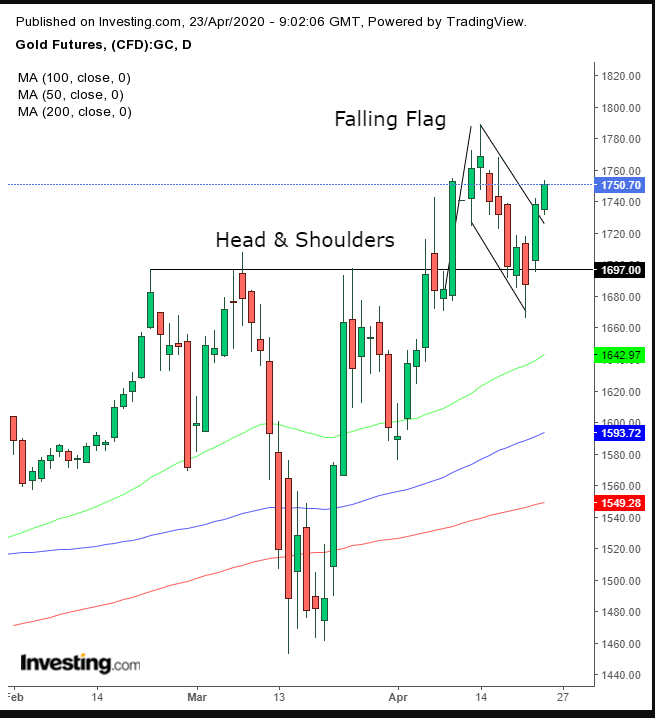 The precious metal extended a  as prices move toward $1750.