Futures contracts on the , , and continued to slide in pre-US open trading on Thursday, and European stocks were pushed back, as yields eased their advance.

Gold tested support while the dollar tested resistance amid a bottom for the global reserve currency.

US futures extended the retreat of the underlying benchmarks that was triggered by US bond yields touching the 1.5% level. The equity slump is based on renewed concerns that expectations of rising inflation and the inevitable response from the Federal Reserve—despite its promises to the contrary—of raising interest rates to stop the economy from overheating, would topple the stock market.

Concerns of a stock market dive is justified, given that higher yields would siphon away investment from stocks to Treasuries as well as exposing many investors who have, for a long period of time, ignored the real cost of artificially elevated stock prices in a near-zero interest rate environment.

A fall in the price of gold spurred a selloff in mining stocks, which weighed on the Index, causing the first decline for the pan-European gauge in four sessions.

This morning, Asian stocks tracked Wednesday’s tech-led selloff on Wall Street. Real estate, finance and energy sectors gained, showing that underneath the market chatter and amid a broad market selloff, stock selectors still believe in the reflation trade as they are recommitting their funds to those industries with the most to gain.

Stocks listed on the and on Hong Kong’s dropped more than 2%, as did Japan’s .

All four major US indices were down in Wednesday’s trading. The took the brunt of the selloff, losing 2.7%, while the , in second place, fell 1.3%, less than half the fall of the tech-heavy index.

Excluding the , which fell just 0.4%—as it tends to perform well amid panics due to its long-time reputation of blue-chip stability—the other side of the spectrum was the small cap , which fell just 0.8%, less than a third of those on the opposite end of the cyclical rotation, technology shares.

The fact that American domestic firms are consistently outperforming technology stocks—whose time to shine was during the coronavirus lockdowns—suggests that there is another layer to the headlines that rising yields will increase inflation.

Yields, including on the Treasury note, have been slumbering since the 2008 crash, despite almost every conceivable effort by both fiscal and monetary policy. More savvy investors are keeping their money, or at least some of it, in the market and are targeting the sectors they believe will do well, despite—or rather because of—inflation.

To clarify, that does not necessarily mean that those betting on reflation are correct, and even if they are, it doesn’t mean that stocks won’t undergo a correction before they rise.

Market timing is the most elusive of investing skills, and these investors might be value holders, who are simply positioning themselves for what they believe will be a higher market supported by an economic recovery, at whatever point it may happen. 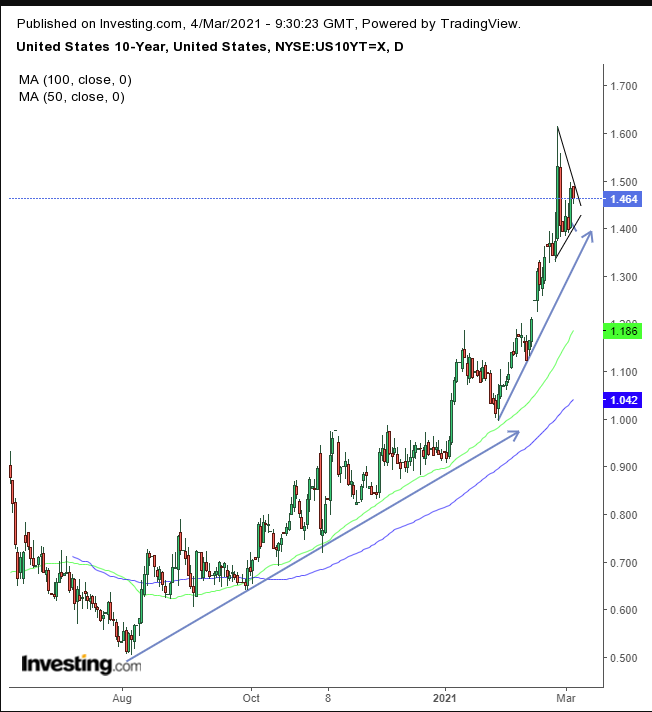 The ease in yields may be developing a pennant, a continuation pattern, suggesting that the ever-rising uptrend will continue. This expectation reflects the view that Treasury traders who bought additional issues, may take profits, selling them, and thus pushing yields higher still.

The rose for the second day, retesting the 100 DMA, as it attempts to overcome the resistance of Tuesday’s highs. This is before it seals the breakout by taking on the February high, and completes the falling wedge since the March high, as it establishes a new uptrend.

fell for the seventh out of eight days, although it is still within the price range of the last few sessions. It seems to have come upon an apparent support level, where considerable trading has taken place between February and June. 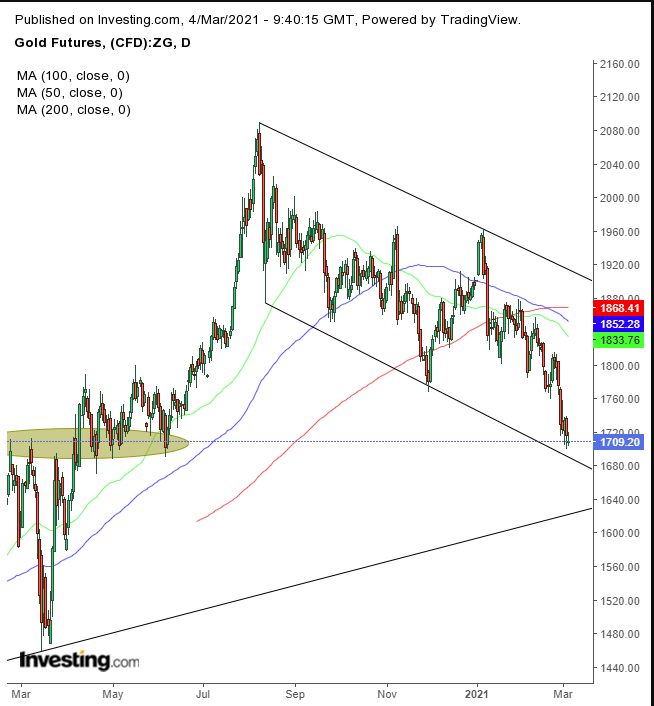 Also, the price reached the bottom of its falling channel, where buyers have pushed back sellers, to the range top. Finally, the price is also nearing the uptrend line from the May 2019 low.

fell back below $62 a barrel, with traders focusing on the critical OPEC+ . At the same time they’re tracking events in the Middle East after Houthi rebels said they hit a Saudi Aramco (SE:) site with a missile. The OPEC+ decision may see supply curbs rolled back. 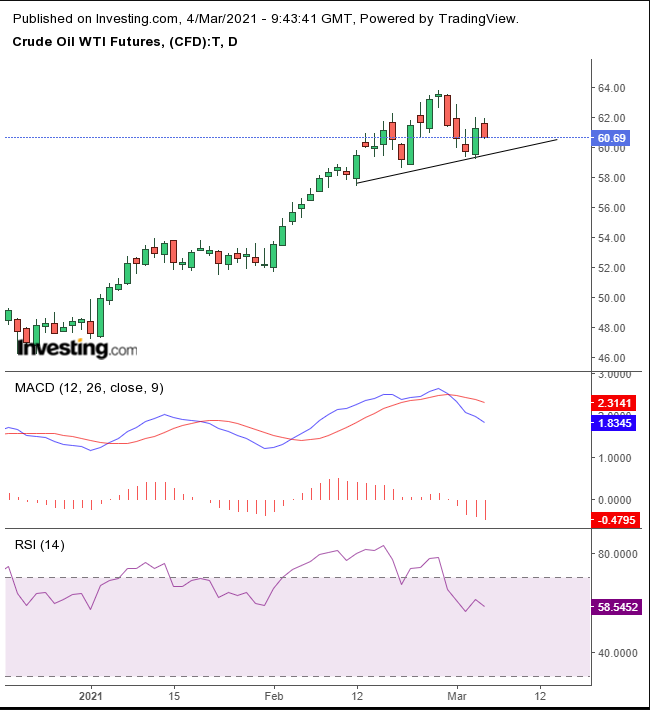 WTI may be developing a small H&S top, confirmed with a bearish MACD cross and an RSI Negative divergence.