Futures on the , and NASDAQ 100 stood squarely in the red this morning, pointing to a lower post-U.S. holiday open as global growth concerns, stalling trade negotiations and Brexit fears continued weighing on market sentiment.

Ten-year Treasurys edged higher alongside gold and the yen, even against a strengthening Dollar Index. 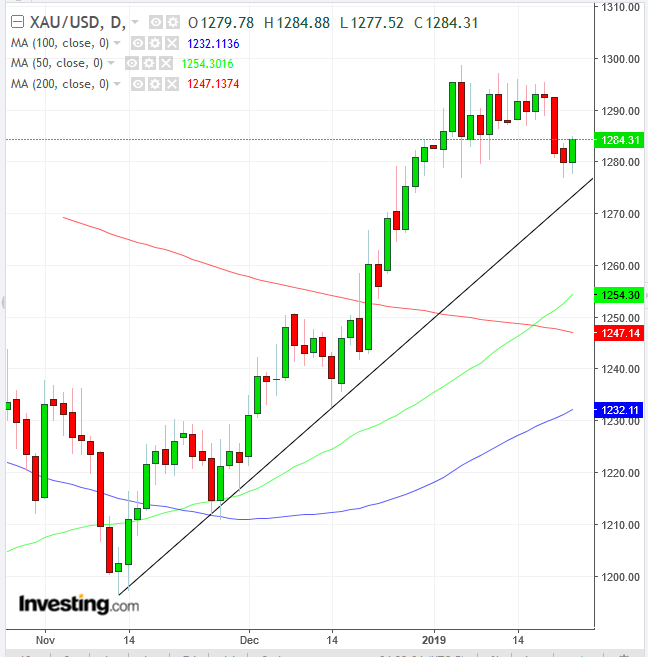 Gold in specific benefited from traders offloading risk after prices neared their uptrend line since November 13—but later reversed its course and slipped lower.

The broader outlook for European as well as global growth has deteriorated: the International Monetary Fund cut its forecast for 2019 growth to 3.5 percent from 3.7 percent, while it revised forecast for 2020 to 3.6 percent from 3.7 percent. European market players took the IMF revision especially hard, as the agency cited weakness in the German auto industry—the heart of Europe’s economic growth—as a key driver, as well as the U.S.-Sino trade dispute.

Meanwhile in the UK, lawmakers are tabling amendments to Prime Minister Theresa May’s Brexit draft. The British PM noted that she would keep seeking further concessions from the EU on the Irish border—which has become one of the main stumbling blocks in the negotiations—ahead of the paramount March 29 deadline. 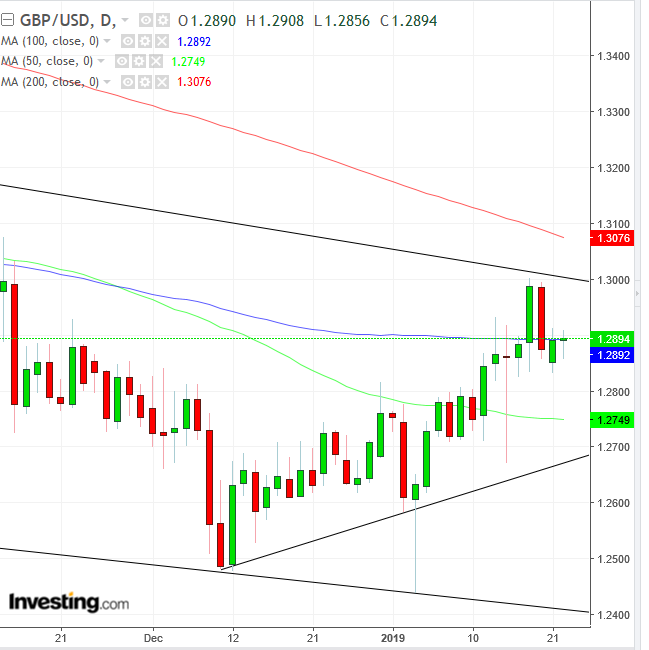 Short-term pound bulls are fighting medium-term bears, as the chart illustrates. Sterling’s rebound since December is testing the top of the downtrend line since May.

Conversely, sentiment soured on the trade-talks front amid a perceived lack of progress on technology copy rights—a key issue within U.S.-China negotiations. Adding fuel to the fire, U.S. President Donald Trump tweeted: “China posts slowest economic numbers since 1990 due to U.S. trade tensions and new policies. Makes so much sense for China to finally do a Real Deal and stop playing around!”

China posts slowest economic numbers since 1990 due to U.S. trade tensions and new policies. Makes so much sense for China to finally do a Real Deal, and stop playing around!

26.2K people are talking about this

“Most of the time, when you buy when sentiment is this depressed, you tend to make money; unless there’s a recession.”

Investors are facing a deepening divergence between tailwinds—of trade-war resolution prospects and company growth—and headwinds—of persistent trade negotiation jitters and weakening global growth. Is this the end of the bull market? We believe the coming weeks may give us the answer. Should the S&P 500 2,700 levels hold resistance, as we tend to believe, then the December lows will be tested. That’s where the downtrend line from the September record peak, October-December range and major moving averages is situated.