The post-Christmas global stock rally showed signs of losing steam this morning, as European shares and futures contracts on the , and tracked Asian equities lower.

Today’s setback occurred despite the three tailwinds that had helped the previous upward push remain intact: a dovish shift in the Fed’s , a de-escalation of the US-China tariff dispute and last Friday’s upbeat US . Historically, government shutdowns like the one currently taking place in the US don’t justify an equity decline. That leaves us with the simple explanation that the current rally is nothing more than a correction within a downtrend, as we’ve previously argued and as the S&P 500 chart (pictured lower) exemplifies. 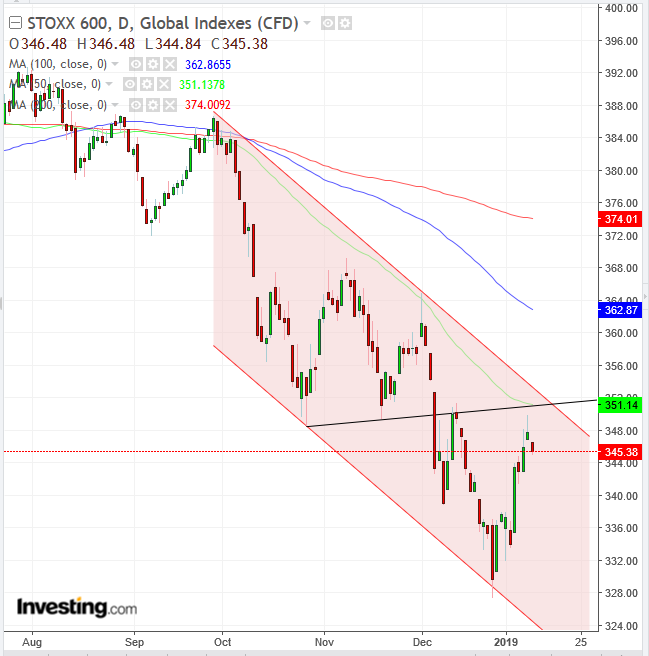 The wiped out Wednesday’s gains, dragged down by carmakers, which just yesterday had outperformed on positive US-China trade talks sentiment. Technically, prices are falling after yesterday’s trading developed a shooting star, a candle whose bearish implication is reinforced by a cross-road of technical triggers: the October-November support turned resistance, the 50 DMA and the top of a falling channel.

In the earlier Asia open, most regional benchmarks weakened despite a softer and optimism surrounding diplomatic talks between the world’s two largest economies. Japan’s (-1.29%) underperformed, dragged down by the Retail, Chemical and Electrical/Machinery sectors. Australia’s was the best performer, rising 0.29 percent. Hong Kong’s (+0.24%) advanced again while the mainland’s (-0.36%) slipped lower. 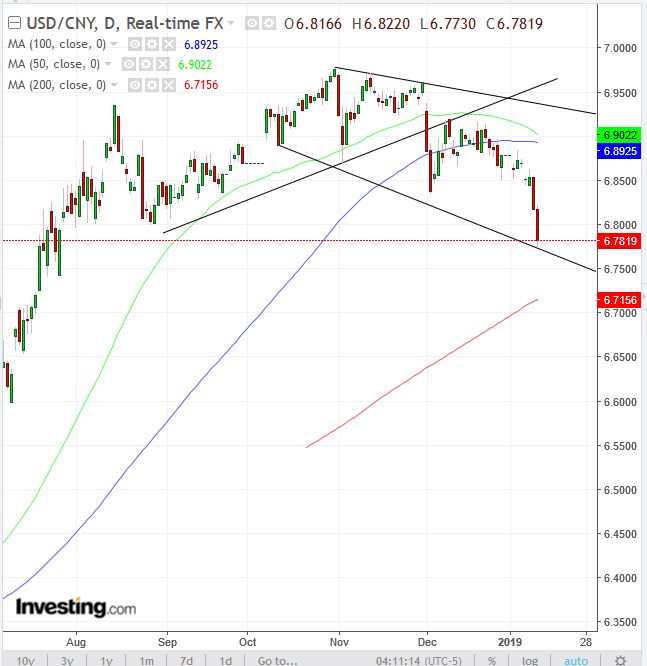 Perhaps a strengthening was weighing on stocks, after the currency reached the strongest level since August, as the short-term USD/CNY pattern shifted downward. Obviously, this is helpful for trade negotiations, as US President Donald Trump complained repeatedly about a weak Chinese currency.

In yesterday’s US session, equities extended the rebound from the end-of-year bottom as Fed revealed a more dovish tilt than expected. However, optimism was partially offset by the second-longest government shutdown in history, which entered its 19th day on Wednesday. If Trump and US lawmakers fail to reach an agreement on Saturday, we will witness the longest government shutdown in history.

Adding to ongoing political tension, the US president stormed out of a meeting with Congressional leaders yesterday when House Speaker Nancy Pelosi reiterated she would not fund a border wall. 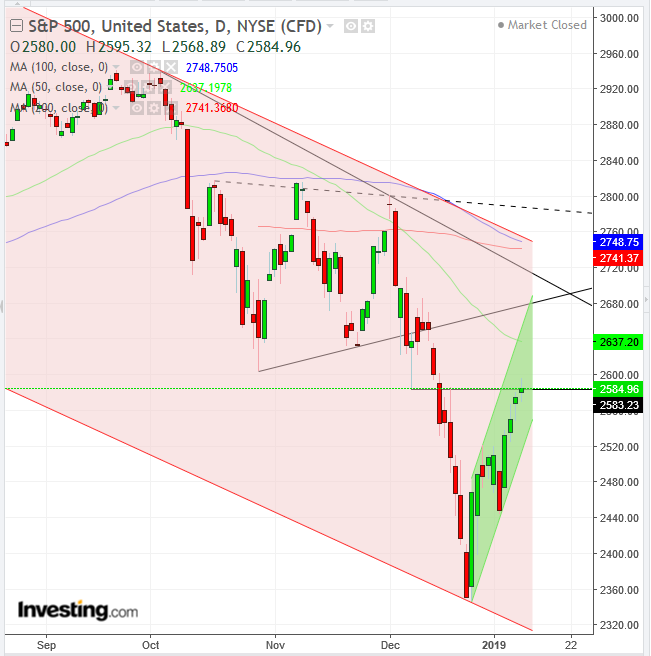 The closed 0.41 percent higher, with (+1.58%) the obvious leader as it tracked oil prices higher after returned to a bullish market. , the usual leading sector, advanced 1.29 percent. Defensive sectors (+-0.93%) and (-0.6%) lagged, as well as interest rate sensitive (-0.41%). It may appear counter-intuitive that the sector which holds a negative correlation with interest rates should fall after surprisingly dovish minutes were published. The answer may lie in the famous Wall Street adage “buy the rumor, sell the news.” Investors appear to think the reduced interest rate outlook is already priced in.

The gained 0.87 percent. The also climbed 0.87 percent, outperforming, once again, despite market structure suggesting it should underperform, as hopes for a US-Sino resolution should make small-cap stocks unattractive compared to their large-cap counterparts, who stand to gain the most from easing tariffs.

Is this negative divergence a signal investors lack faith in the US-China negotiation process, or perhaps an outright dismissal of the trade dispute as a key headwind in the current market climate? 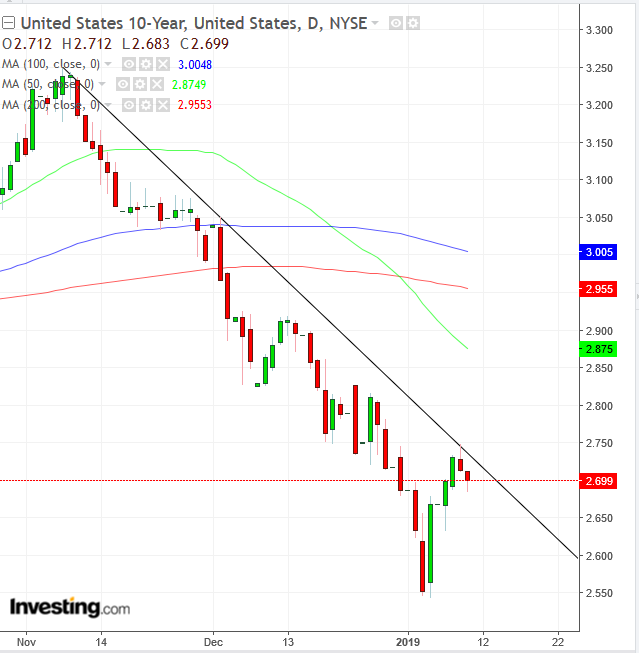 The yield on Treasurys fell for a second day after it reached the downtrend line since early November, when yields hit the highest level since May 2011. Recently, the 50 DMA crossed below the 200 DMA, triggering a Death Cross. 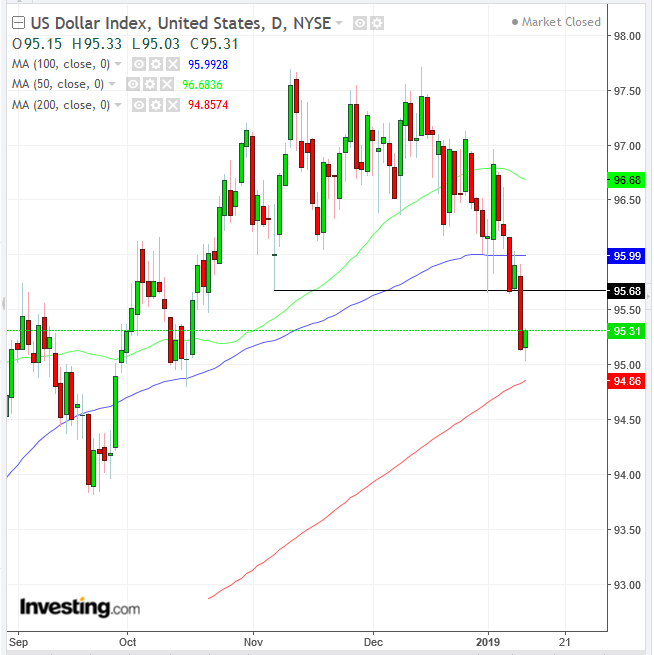 The dollar sold off, slipping 0.78 lower, after Fed minutes confirmed the central bank’s resolve to slow down the pace of interest rate hikes. Technically, the greenback finally topped out completely, as it has been signaling for weeks.

It is noteworthy that the minutes projected a different picture than what emerged from Chair Jerome Powell’s speech. Central bankers seemed to acknowledge a lack of clarity after the last vote for a , and seemed less eager to press on with further increases until inflation ticks higher. The message was in stark contrast with Powell’s “automatic pilot” comment regarding normalizing the Fed’s balance sheet. The minutes makes sense in the post-market turmoil reality. They seem almost fine-tuned to new market expectations. 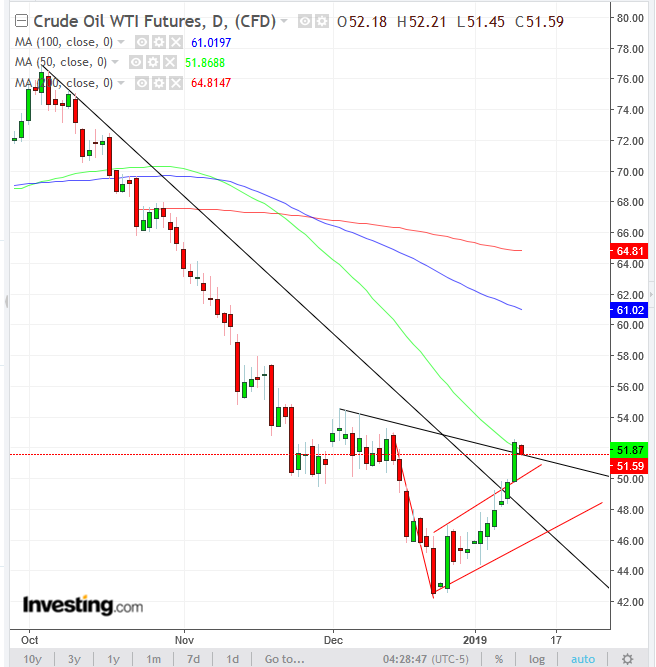 Oil gave up 2 percent this morning on rising , though it later re-gained some ground. The early drop marked the first correction after eight straight days of gain—the longest rally in one and a half years, with supply cuts and the broader market’s risk-on shift prompting a 5.18 percent surge. Technically, supply overcame demand at the 50 DMA and the downtrend line since December 4, after crossing above the downtrend line since October 3, when it reached the highest levels since mid-November 2014. However, it blew out a rising flag (red), bearish in a downtrend, suggesting further rallies.