Positive European earnings added to the knock-on effect of yesterday’s US rally post midterm elections, after Asian indices mostly moved higher this morning. However, futures on the , and suggest investor optimism may not make it across the Atlantic today. 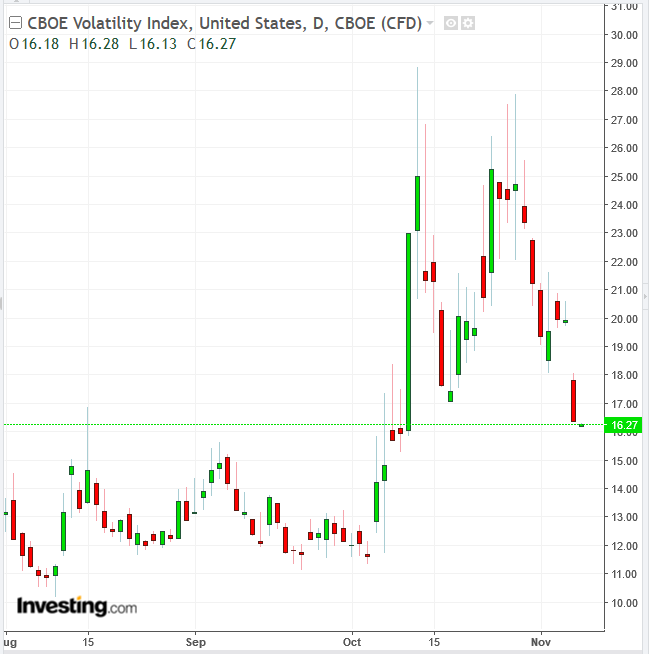 During the US session subsided to the lowest level in almost a month but then picked up quickly, and we expect it may start climbing higher if any US government gridlock results in a political tug of war that hinders policy implementation and stability.

The climbed for a second day, led by shares in the travel and leisure sector. The price dip in Italy’s largest lender (MI:) offset higher gains for the pan-European benchmark after the bank provided softer guidance, joining many firms that revised their guidance lower this quarter, on trade concerns. (DE:) Europe’s biggest engineering company, gained after increasing dividends and announcing it will buy back EUR3 million of shares. Expect exceptional volatility in Europe today as roughly 50 members of the index release earnings.

During the earlier Asian session, regional benchmarks closed higher, except for China’s (-0.22 percent), which extended a fall to the fourth day for a total loss of 1.65 percent as traders remain pessimistic over a trade war breakthrough—amid the looming threat of further tariff hikes. They also await action after repeated government promises of policies to boost a waning economy and unstable markets. Japan’s outperformed its major Asian peers, climbing 1.83 percent, as the weakened for the fourth session out of five, boosted the benchmark’s outlook for exports.

Yesterday, stocks in the US surged as investors mulled over the potential impact of midterm elections. 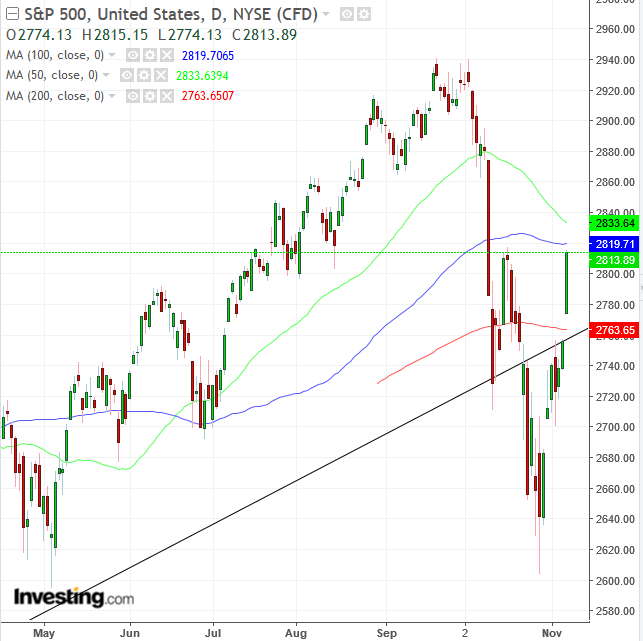 The jumped 2.12 percent, with every sector gaining over 1 percent except for (+0.57 percent). outperformed (+2.94 percent), as the outlook for insurers and hospitals seemed a lot brighter post the midterm vote. The Democrat’s new majority in the House greatly reduces the chances, going forward, of any health care repeal. Moreover, several states passed ballot initiatives to expand Medicaid under the Affordable Care Act.

(+2.92 percent) followed Health Care closely, as risk-oriented investors bought into what, prior to the selloff, was consistently the best performing sector. Traders are probably expecting that if stocks are climbing back, tech shares are likely to continue to lead. Amazon (NASDAQ:) (+6.86 percent) and Netflix (NASDAQ:) (+5.36 percent) were among yesterday’s the best performers.

Technically, The SPX climbed back above its uptrend line since the previous correction of January 2016, as well as jumped clear over the 200 DMA, stopping below the 100 and 50 DMAs. The benchmark closed near the height of the session, demonstrating bullishness.

The added more than 500 points, advancing 2.13 percent. Technically, it climbed above the 50 DMA, after already moving past the 200 DMA, then the 100 DMA. It closed near the top of the session, demonstrating investors’ commitment to their positions.

The outperformed, gaining 2.64 percent, as investors who cashed out causing the selloff came back for more. Technically, it climbed back over the 200 DMA, but the 50 DMA crossed below the 100 DMA, providing a mixed outlook.

The underperformed, climbing 1.7 percent. The small-cap benchmark remains the only major US index which is still below both its uptrend line since the previous correction and its 200 DMA. Also, its 50 DMA fell below its 100 DMA. 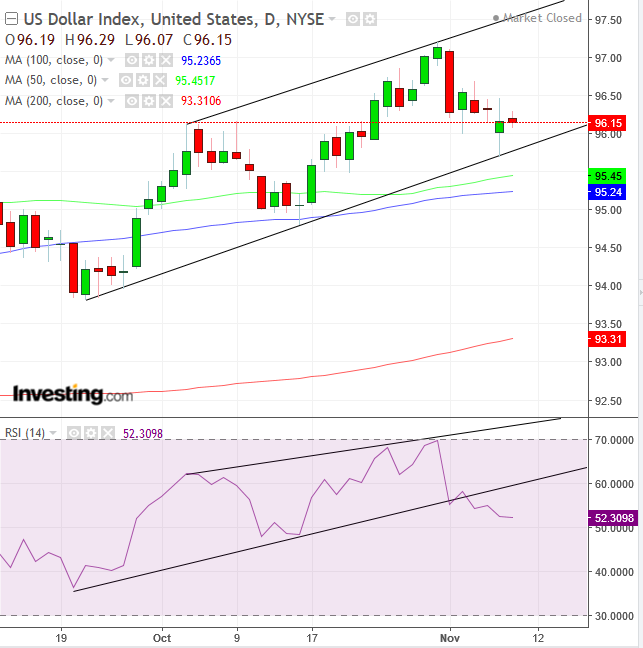 The is slipping for a second day, ahead of a Federal Reserve . As well, the renewed sense of risk-on weighs on the USD, which has benefited from its safe haven status since the start of the US-China trade dispute in March. Moreover, foreign investors cash out of US Treasurys and repatriate funds, which naturally includes a forex transaction against the buck. Technically, the Dollar Index yesterday found support at the bottom of a rising channel. However, the RSI demonstrates that momentum fell through its channel bottom, increasing the odds that prices will follow suit.

crude bounced after outweighed OPEC plans for supply cuts. However, it was later seen wavering under neutral levels. Technically, the bounce comes after the price reached less than 5 percent from its long-term uptrend line since the early-2016 bottom and after entering the most oversold condition since the same time.