Global stocks and US futures for the , and point to a continued rally, as both China and the US took steps to cool down the trade war.

Yields on US Treasurys resumed their climb as investors abandoned securities for growth assets, highlighted as well by an early-session slip in the safe haven . , however, was on the rise, mostly as a direct consequence of the weakening. The precious metal gained about 0.1 percent—just as much as the greenback gave up.

However, both the yen and gold are wavering at the time of writing. 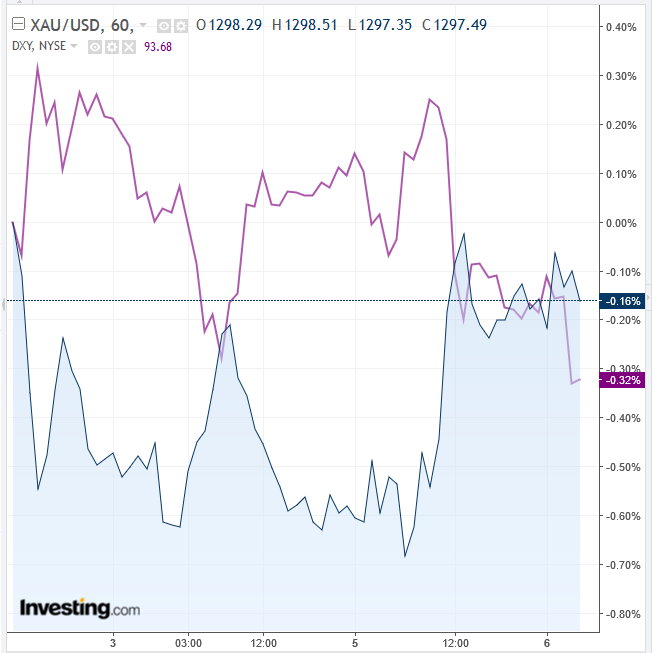 The risk-on mood seen across global markets this morning follows an upbeat US session yesterday that included several bullish factors, such as both the and hitting fresh record highs for the first time since mid-March. Also, the posted a new record high—its ninth over the same period.

European shares followed their Asian counterparts higher, with most sectors of the pan-European climbing to positive territory. Shares of miners in particular outperformed, courtesy of a rally in commodities—which was in turn favored by the dollar slipping lower for the third consecutive day.

Earlier today, during the Asian session, the gained ground after news broke that China has offered to purchase nearly $70 billion of US goods if US President Donald Trump abandons his plans for hefty tariffs. The US Treasury Department also helped boost sentiment by vowing to loosen limits on Chinese investments. The Trump administration is also said to be finalizing a deal to allow China’s smartphone company ZTE Corp (HK:) to resume purchases from American suppliers.

The fact that Materials stocks outperformed suggests that investors saw the sector’s lackluster performance over the trade war saga as a buying opportunity, even before the latest conciliatory moves by the US and China were unveiled yesterday.

Gains in the Industrials sector, however modest, also indicated that the single biggest headwind to stocks over the last few months, trade war jitters, is now dissipating.

Reinforcing this view: the was the only major US index to slightly retrench, ending 0.05 percent lower. However, this marked a rebound from a deeper 0.4 percent slide and can therefore be considered a positive close. 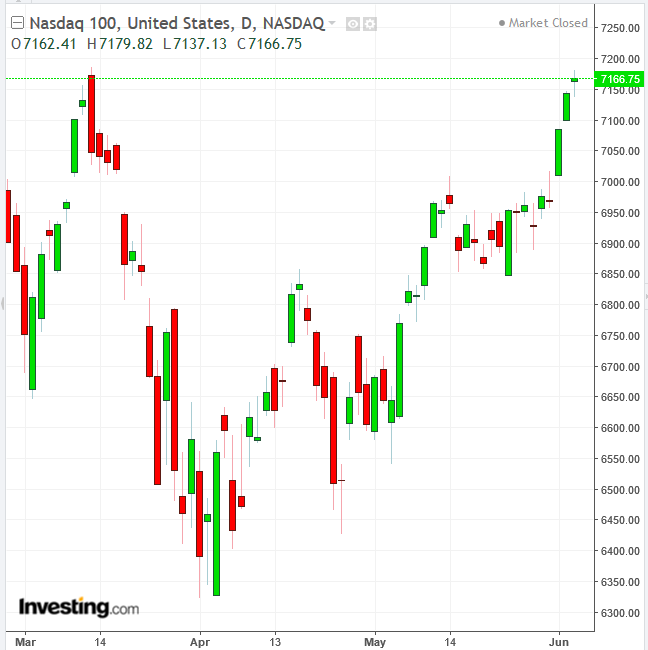 The most noticeable performance, however, came from technology stocks. The and the each pushed higher, 2.6 percent and 2.85 percent respectively, over three days, adding 0.4 percent 0.33 percent just yesterday. This allowed both tech-heavy indices to make record highs on Tuesday, for the first time since mid-March.

Is bearish sentiment on the way to disappearing? Unlikely. Heightened political headwinds in Italy continue to shape the narrative.

Italian bonds—whose recent selloff prompted a risk-off wave across global financial markets, sparking fears of a broader contagion effect—suffered their heaviest slump in a week yesterday, after new Italian Prime Minister Giuseppe Conte laid out a euroskeptic agenda that promises to challenge the EU on different policy fronts. Although Conte said the country’s exit from the was not on the cards, the mere mention of those two words “euro” and “exit” together was enough to spook traders.

The radical plans outlined by Italy’s new PM may have reminded investors of Trump’s “revolutionary” rhetoric, as both identified “unfair” external interference—in the case of Italy, the stringent economic and financial measures set out by the EU to drive the Southern European country out of the post-2008 financial crisis— as the cause of domestic headaches.

Investors are also bracing for an anti-Trump backlash in a meeting with the Group of Seven this week: while relations between the US and China are reportedly being patched up, G7 allies have recently vented anger at the US president’s hardline position, especially over and tariffs, setting the scene for a heated debate when the global summit kicks off in Quebec on Friday.

Investors may look for more solid proof that trade disputes are on the mend, especially after it was reported that Treasury Secretary Steven Mnuchin asked Trump to repeal levies against Canada.