US futures for the , , were mixed, hovering around neutral levels in the early European session.

Automakers took a hit in Europe after Trump dealt global markets a new trade blow by ordering the US Commerce Department to examine the possibility of imposing tariffs of up to 25 percent on vehicle and car-parts imports.

However, miners and oil stocks offset slumps in automakers shares, even as and futures kept edging lower, the former on track for a third consecutive negative session today. This helped eke out a 0.1 percent gain. However, the pan-European benchmark index is still more than one percent below the three and a half month peak it posted on Tuesday, as it suffers downward pressure from both Italy’s political headwinds (and in particular, from the country’s new government coalition spending plans) and ongoing global trade jitters. 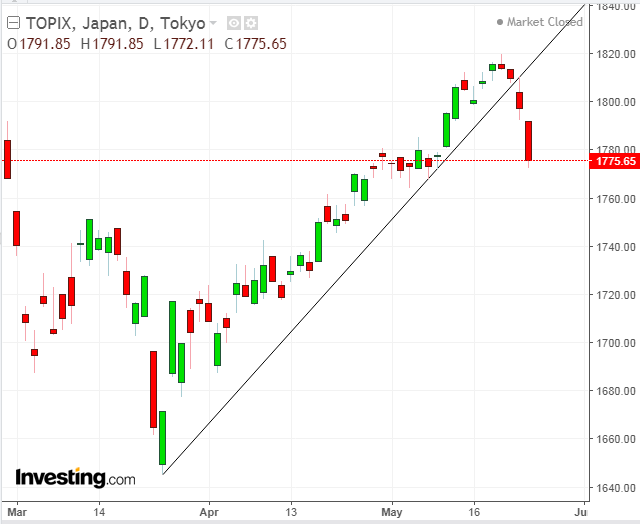 The tumbled 1.2 percent after Trump’s announcement pushed automakers shares lower, bringing the Japanese benchmark index’s four-day declines to a total of 2.15 percent. Re-ignited trade headwinds prompted a further spike in the —creating an additional hurdle for Japanese stocks. Technically, the TOPIX extended a decline after crossing below an uptrend line since March 26 on Wednesday—thereby signaling a reversal.

Chinese shares on the slid 0.4 percent, to a two-day 1.9 percent decline, following an impactful hanging man formation on Tuesday. Shares on Hong Kong’s instead managed to climb 0.4 percent.

South Korea’s slid 0.25 percent on Thursday, as investors finally caught up with heightened geopolitical risk after they had managed to focus squarely on corporate performance on Wednesday, when they shrugged off mounting indications that the June 12 meeting between the US with North Korea may not take place.

The never-ending twists seen across global stock markets this year are somewhat rebalancing the upbeat ride equity investors and traders enjoyed last year, when they simply had to remain invested and watch prices surge, supported by historically low levels of .

Yesterday, US stocks bounced back from a loss in the last two hours of the session, after from the Fed’s May monetary policy meeting revealed policymakers are not seeking to speed up the pace of tightening.

Yields on Treasurys closed below the 3 percent psychological level, but are bouncing back above that key mark today after sliding lower in the early session and therefore forming an intraday hammer. 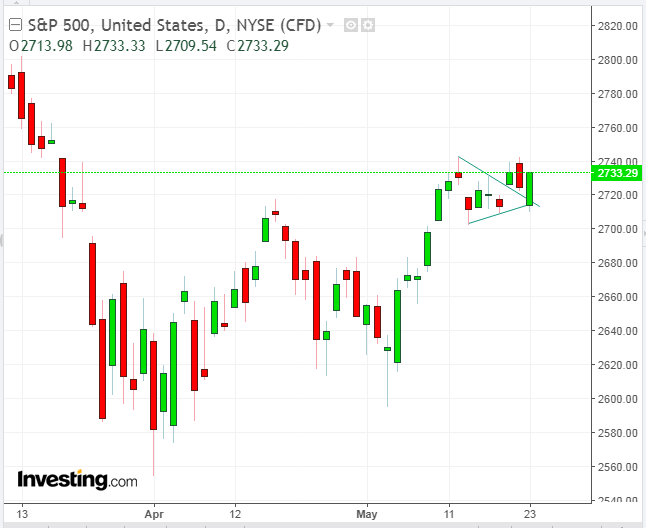 The ticked 0.32 percent higher on Wednesday. However, it was defensive sector to lead the gains (+0.91 percent), which underscores a lingering risk-off sentiment. shares took the hardest hit from a reduced outlook for interest rate hikes, losing 0.64 percent. and , down 0.23 percent and 0.12 percent respectively, took a beating from reignited trade headwinds.

Tired of the geopolitical roller-coaster sparked by ongoing trade disputes and diplomatic glitches over North Korea and Iran, global investors took shelter in , bonds and, naturally, the safety of the yen. 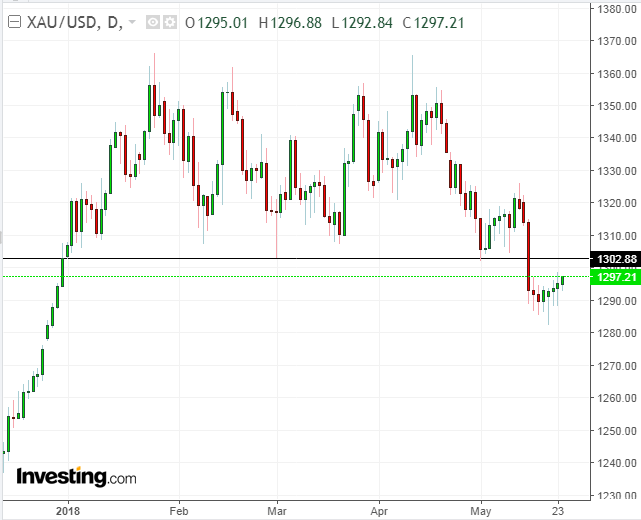 Gold is gaining ground for a third day, within a return move to retest the integrity of the double top pattern. It’s worth noting that the yellow metal inched higher yesterday despite a strengthening . The dollar, in turn, managed to close higher even after FOMC minutes revealed a dovish slant . 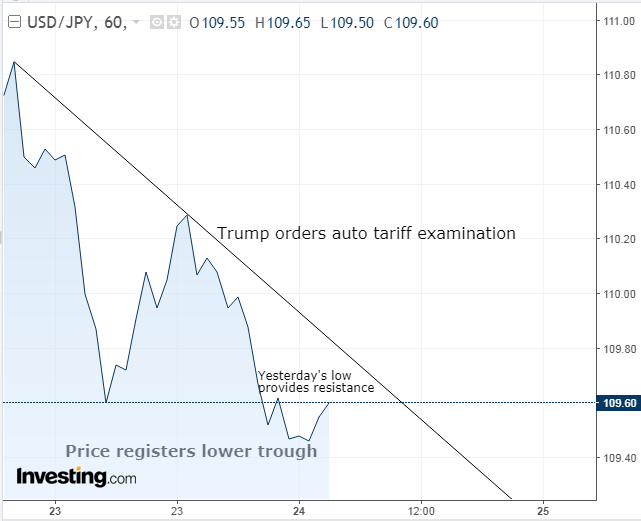 Meanwhile, the yen benefited from the global flight to safety, the dollar’s intraday weakness and Japanese investors’ rotation out of their Turkish exposures.