The improved outlook for US-China trade negotiations continued to boost global trading this morning, with futures on the , and all firmly in positive territory. In FX markets, the gained ground despite a vote on a no-confidence motion against UK Prime Minister Theresa May taking place as early as this evening.

Europe’s climbed for a second day, after the Asian session was pulled higher by reports that Canadian authorities had granted CAD10 million bail to Huawei Technologies’ (SZ:) CFO Meng Wanzhou. The news was compounded by US President Donald Trump’s hints he would consider intervening in the matter to ensure US-China relations remain on the right track. 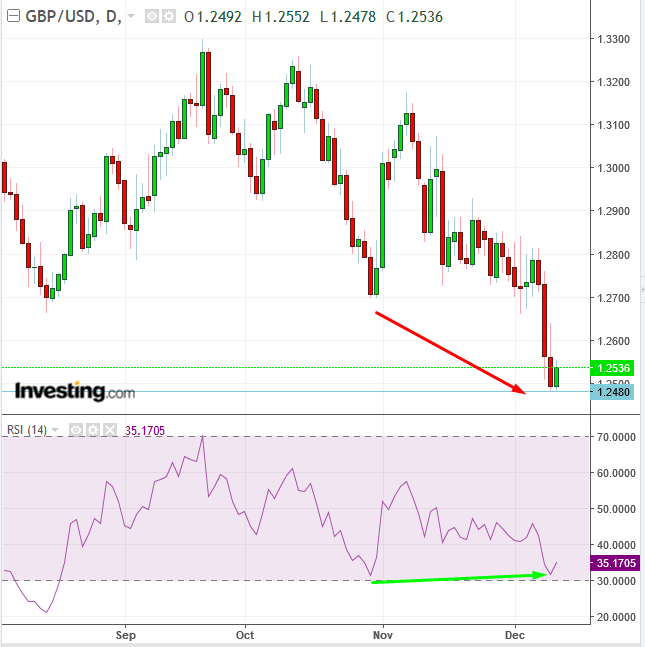 UK investors displayed resilience, with the , sterling and Gilts all edging higher in spite of a looming no-confidence vote that could throw both May’s leadership and Brexit proceedings into chaos. Technically, the pound found support at the 1.25 round psychological level. Traders may consider the currency undervalued after it fell to 1.2480 yesterday, the lowest level since April 11, 2017. The RSI provided a positive divergence, curving up from a higher level than the October 30 low, while the price tumbled 1.7% lower up until yesterday.

In Tuesday’s US session, most stocks slipped lower on the threat of a government shutdown, wiping out gains after opening at least 1 percent higher after reported progress on trade negotiations.

The opened 1.01 percent higher and extended the advance to 1.39 percent, led by shares of car manufacturers. These took their cues from global counterparts after China signaled it would reduce tariffs on auto imports.

However, investors sold off stocks after a televised meeting between Trump and Democratic leaders Chuck Schumer and Nancy Pelosi ended with a threat, by the president, to shut down the government if funding for his security border wall—a centerpiece of his political platform—wasn’t authorized. 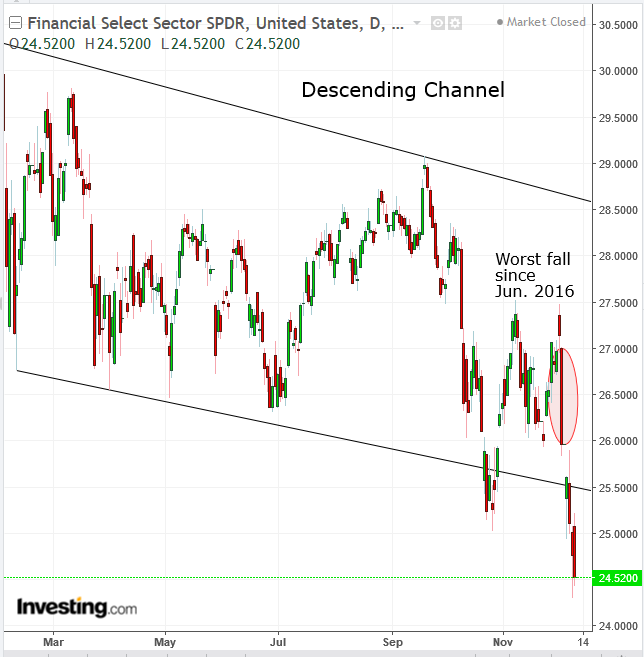 Overall, the SPX lost 0.04% on the day, dragged down by shares (-0.97 percent), which extended a selloff from last Tuesday—the worst since June 2016, and the formal trigger of a bear market for the financial sector, as illustrated by the Financial Select Sector SPDR ETF (NYSE:) chart, above. The price fell below its descending channel since February, suggesting a steeper decline.

Investors are rotating out of the sector after Fed Chair Jerome Powell a slowing path to higher interest rates, re-igniting concerns over a slowing economy. On the other side of the spectrum, defensive sectors performed best, with (+0.82%) leading the gains, followed by (+0.41%) and (+0.31%).

The opened with a 1.21% gap and extended the advance to 1.48%, or 362 points. However, the oldest Wall Street average erased all gains and gave back an extra 0.22% after reports of the government closure threat.

The outperformed its peers, both on an opening and closing basis. The tech-heavy index opened 1.44 % higher, extended the increase to 1.56% and fared as the only US major to close in the green, locking in a 0.16% gain. 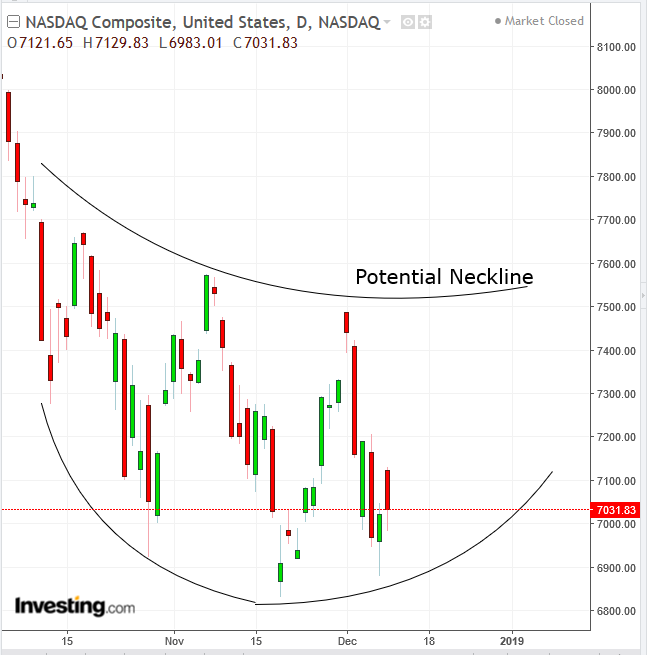 We recently reported a potential H&S bottom was forming. However, upon revisiting, the pattern is more likely forming a rounding bottom. While both patterns provide the same bullish outlook, it’s more challenging to determine an upside breakout for the rounding bottom in the latter case, as its neckline is fluid and therefore subjective.

The , whose listed domestic, smaller firms remain broadly unaffected by a trade breakthrough, opened only 0.08% higher. Still, the overall bullishness caught up with the small cap benchmark, providing a 1.57% advance. However, domestic politics turned those gains into a 0.05 percent loss, pushing the small cap index to its lowest close since September 2017. Technically, the gauge capped a fifth straight loss, extending the downside breakout of a symmetrical triangle, bearish in a downtrend, to about 1.9 percent. 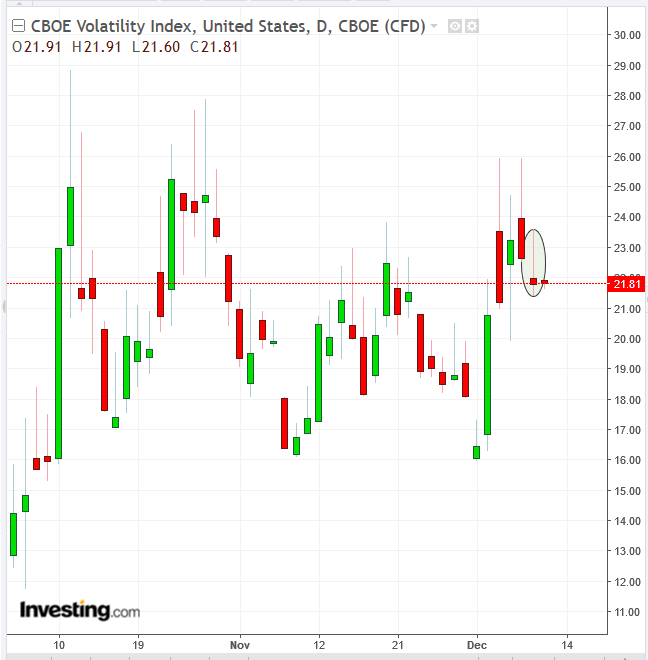 Monday’s session saw the S&P 500’s most significant full reversal since February 6 as it erased a 1.9 percent decline and ended 0.2 percent higher, while Tuesday’s session saw gains as substantial as 1.4 percent and losses as deep as 0.6 percent.

However, the volatility trading pattern, as measured by the , suggests the whipsaws seen across US markets in recent weeks—due to the unpredictable trajectory of trade negotiations, uncertainty about the potential impact of the Fed’s path to interest rates on equities and weaker-than-expected economic data—is showing signs of subsiding.

Traders bet on lower volatility yesterday, allowing the VIX to drop 3.89%, which in turn provided a positive divergence to yesterday’s price swings. If CBOE Volatility Index contracts resume trading their pattern, we might expect equities to retest the consolidation top since mid-October for the fourth time, after the third attempt at higher prices to retest the September all-time highs failed.

Meanwhile, the yield on Treasurys climbed for the third day, as investors rotate out of stocks and into the safety of government bonds. 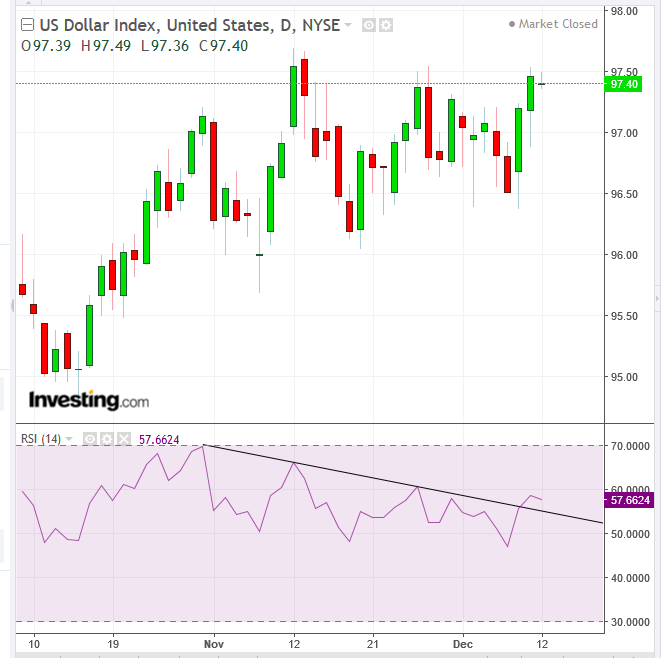 The , however, failed to track yields higher, though it still managed to pare gains from the two previous days. Technically, it struggles at the top of a month-long consolidation. The RSI provides a conflicting picture, first providing a negative divergence when it fell October 31 to November 12 while prices rose, then a bullish signal when breaking through its downtrend line. This dichotomy reflects investor indecision rather than a tug of war between two clear sides.

Investors increased Treasury holdings, pushing the yields higher for a third straight day to over 2.89%, after Trump warned the Fed against hiking interest rates this month.

Today, the edged higher despite French president Emmanuel Macron’s concessions to the country’s labor force threat to lift France’s public spending above EU limits, thereby complicating the ongoing EU dispute over the Italian budget. The between bond yields in France and German rose to the highest level since the 2017 presidential election.

gapped 0.79% higher and extended the advance to 1.88 percent on the announced OPEC supply cuts as well as trade hopes—with the latter factor having an impact on a wide range of commodities that link the US and Chinese economy, such as .