On Thursday, futures on the , , and were all trading in the red and European shares opened lower, with global stocks at their lowest since early April. Spiking US inflation heightened concerns that the economic recovery may be at an impass.

Global markets remain under pressure with the lower for the fourth consecutive day. In Europe, the Index dropped 1% right out of the gate, weighed by slumping commodity prices and a strengthening , after US recorded their biggest jump in in almost 12 years in April, reigniting concerns that the Fed will have to backtrack on its promise and raise interest rates. 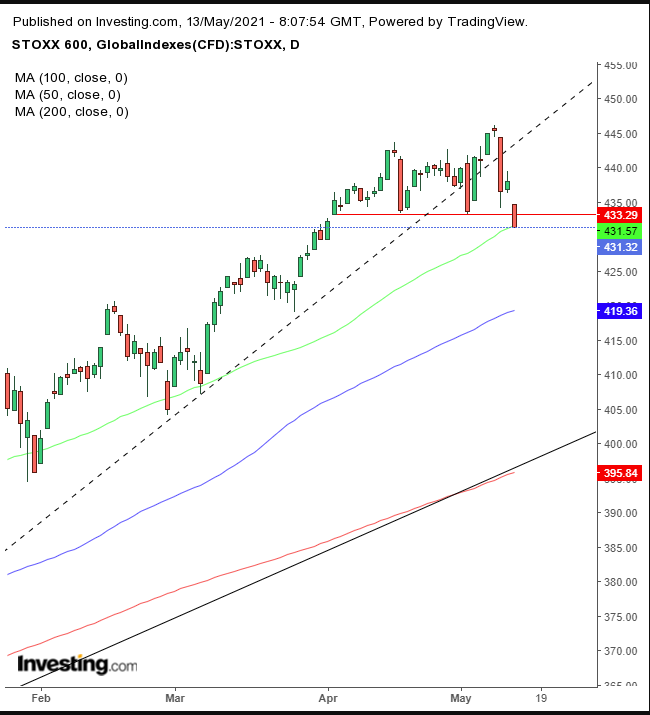 The UK’s also slid, dropping 2.1% at the time of writing, to the lowest since Apr. 6. However, from a technical perspective it seemed in a better position than its continental peer. 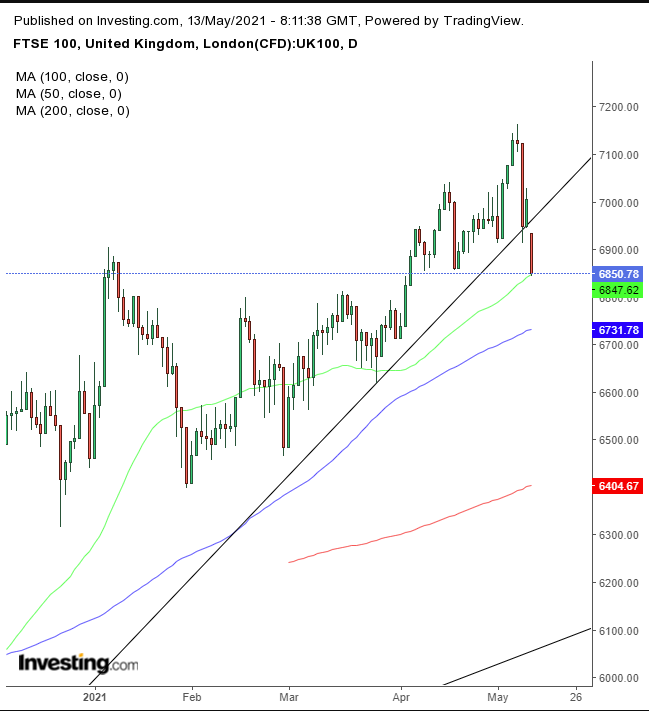 While the price did fall below its uptrend line since late October, Briton’s leading benchmark has not yet decisively topped out, and may have found support by the January highs.

British luxury retailer, Burberry (LON:) plunged 8% after it announced a 10% drop in the company’s annual , a result of pandemic shutdowns. Telecom and broadband provider BT Group (LON:) also declined, after reporting a 7% slide in and 6% drop in annual adjusted earnings.

British financial services group Hargreaves Lansdown (LON:) was lower as well, despite record new business in the first quarter, as people increased their savings during the coronavirus lockdowns.

Asian markets sank this morning and regional gauges were on course for a technical correction. The fell as much as 1.5%, which means it has fallen 10% from its Feb. 17 high, erasing all gains YTD.

On Wednesday during the Wall Street session, US stocks posted their sharpest selloff since February, after the inflation report surprised traders. The  sector—which has been enjoying the highest market valuations—continued to sell off, leading the market lower. Big tech names like Apple (NASDAQ:) and Microsoft (NASDAQ:) shed over 2%. (+0.5%) was the only sector in the Index in the green.  (-3.4%) underperformed. 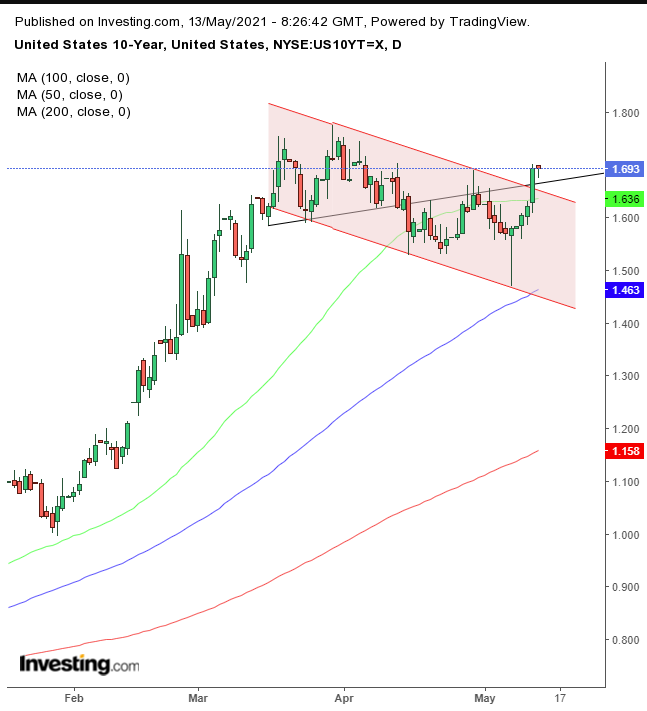 The jump took rates back above the extended neckline of a top. It also meant rates broke out of their falling channel.

The outlook for higher rates boosted the dollar, offsetting concerns of its weakening buying power, as traders are confident the Fed will raise rates, promises or not. 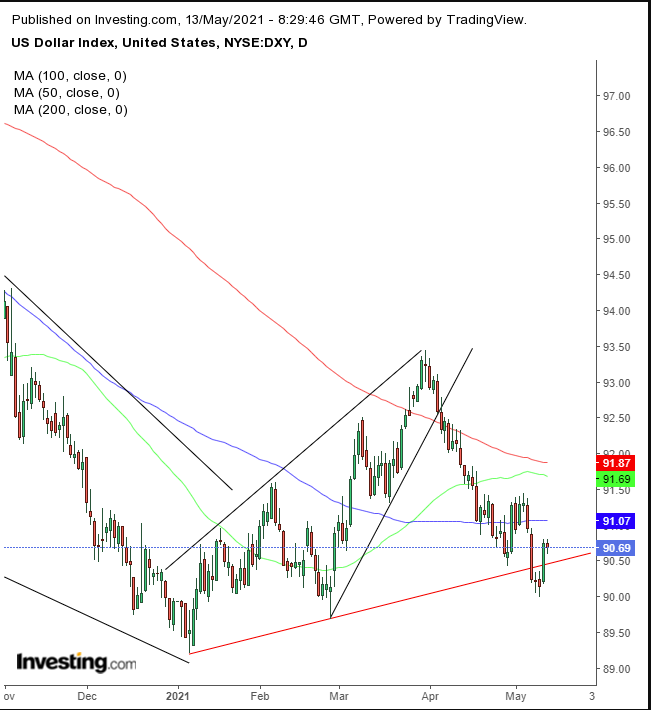 The USD stabilized after bouncing back above its uptrend line. It continues to struggle between the recent, smaller bearish wedge and the earlier, massive bullish wedge (based on our interpretation having followed a cataclysmic rise). 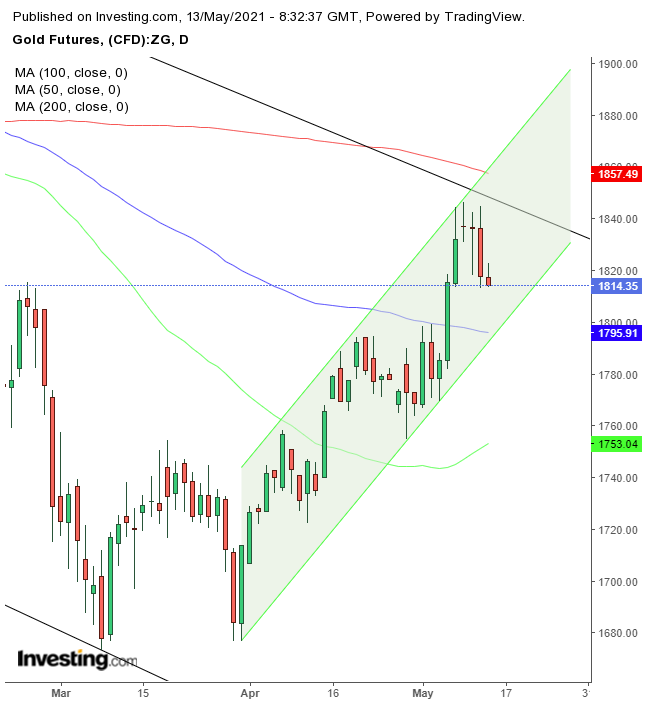 plunged after Elon Musk added to the gloom on the cryptocurrency when he said Tesla (NASDAQ:) will no longer accept Bitcoin as payment for its EV cars due to the “rapidly increasing use of fossil fuel for Bitcoin mining and transactions.” 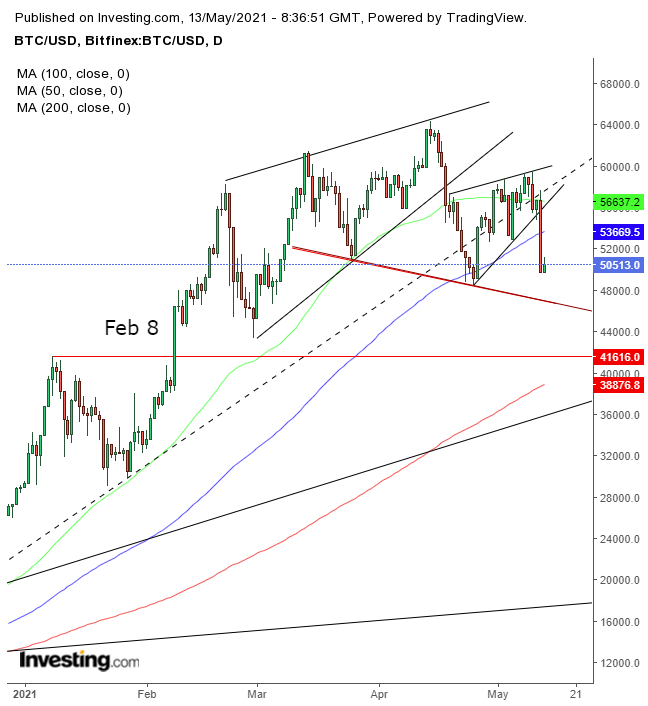 The digital currency completed its second bearish wedge in a row, as it completes a H&S top, whose downside breakout is aiming at the low $30,000s. Bitcoin enjoyed a 65% increase in value between Feb. 8 and Apr. 14 after Tesla’s announcement that it had purchased $1.5 billion of Bitcoin and will accept the digital currency as payment.

fell as the Colonial Pipeline, the largest oil products conduit in the US including gasoline, which was hacked last week, restarted operations. The impact of the outage isn’t fully clear at this point but it could potentially impact prices and supply going forward. 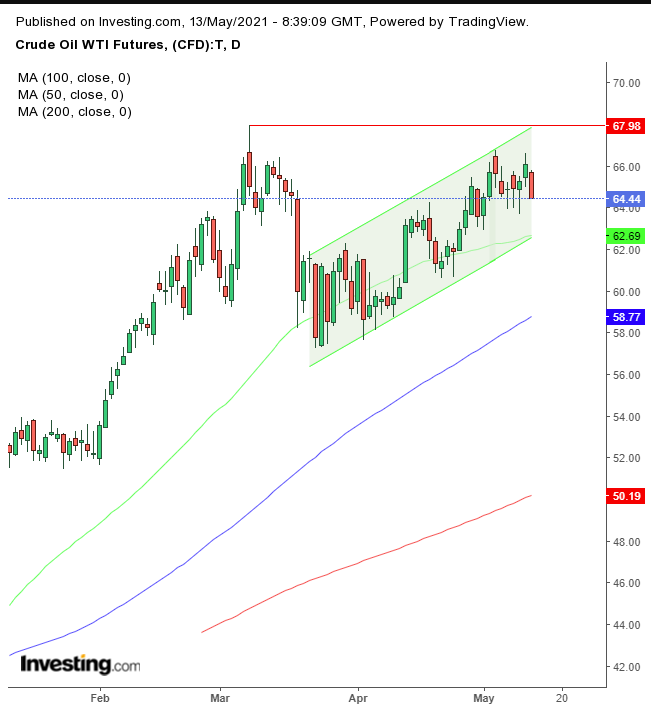 The WTI fell from the top of a rising channel that is challenging the Mar. 8 peak.