Futures on the , and were hovering in positive territory this morning, while European shares seesawed after ongoing trade tensions spurred a selloff in the automotive sector. 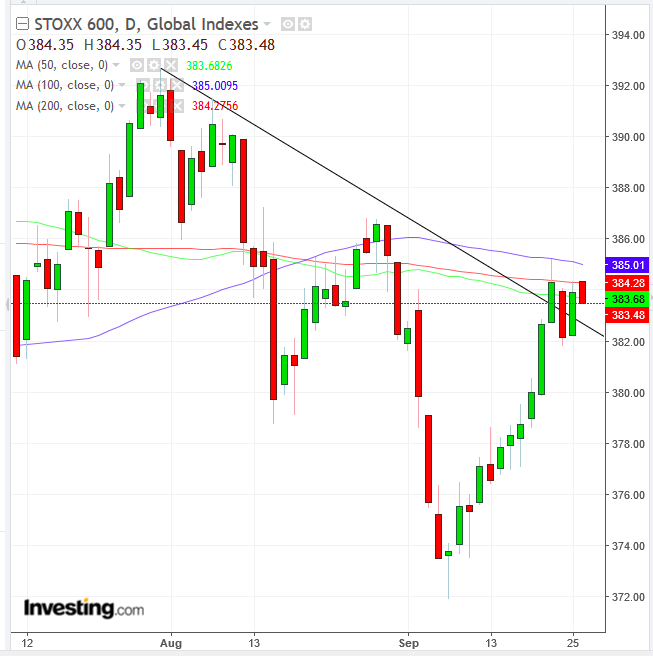 The pan-European opened 0.12 percent higher but then fell 0.07 percent as of the time of writing, dragged lower by car manufacturers. Technically, the higher open hit a brick wall of sales orders above the 200 DMA, pushing prices down to the 50 DMA, where traders supported the price.

The price is meandering within a cluster of major moving averages (MAs)—which have met with the downtrend line since July 31—for the fourth consecutive day. Converging supply and demand pressures create this vortex of technical milestones. A move above 385.00 would suggest that the bulls took control, while a close below 382 would confirm the downtrend.

Earlier, during the Asian session, Chinese stocks outperformed, after global index provider MSCI announced it is considering quadrupling the weighing of large caps from the Asian country in its global benchmark. Meanwhile, the FTSE Russell is already expected to include Chinese shares in its benchmark this week. This gave traders some respite from worries over the country’s trade dispute with the US, allowing them to focus on the prospect that the broadened global access to Chinese equities stands to elevate foreign demand, which in turn is poised to prop up prices.

The climbed 0.92 percent to the highest level since August 1, potentially bottoming out, after closing for a third day above the 50 DMA. The 50 high-profile firms listed on the posted even healthier gains, jumping 1.33 percent, to cross over the 100 DMA. Hong Kong’s also enjoyed a 1.15 percent boost. 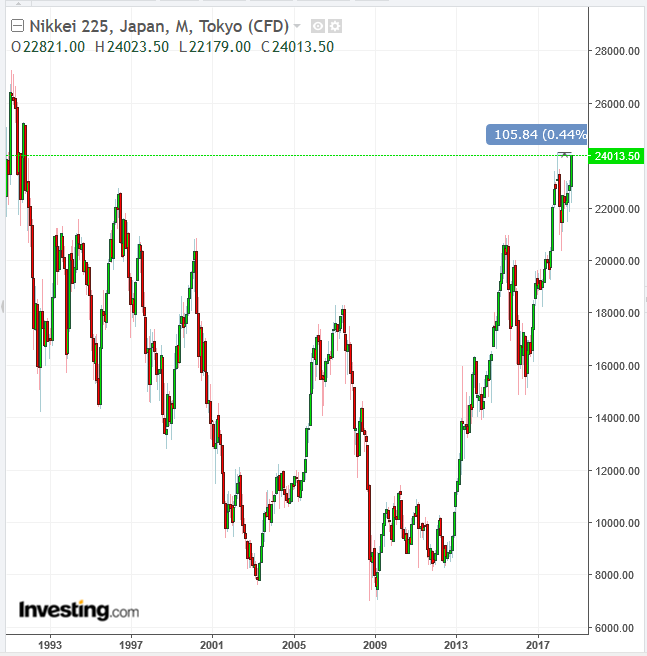 The upbeat sentiment spread to other regional markets, with Japan’s erasing virtually all the day’s losses to end just 0.04 percent below its highest point in almost eight months. The ticked up 0.36 percent to its highest close since January 23, less than 0.5 percent from the highest level since November 1991.

US benchmarks were mixed yesterday, as a 2.08 percent jump in Amazon (NASDAQ:) shares pulled the higher, while the prospect of increased interest rates pushed utilities stocks lower. Conversely, the ongoing US-China trade spat weighed on industrial shares, while drillers rallied with .

The dropped 0.13 to a combined three-day retreat of 0.52 percent, which follows last Thursday’s record close. were by far the biggest losers, as the highly anticipated Fed made bond proxies less enticing.

The underperformed the other major US averages, slipping 0.26 percent lower—or 0.94 percent lower for the week. Comments by US President Donald Trump that the country’s trade deficit with China “is just not acceptable” heightened fears of further escalation of diplomatic tensions, which is seen as a key headwind for multinational businesses.

Jeffries’ analyst Brent Thill wrote in a note that Amazon stock could hit $3,000 in two years, propelling the e-retail giant to a near $1.5 trillion market capitalization. 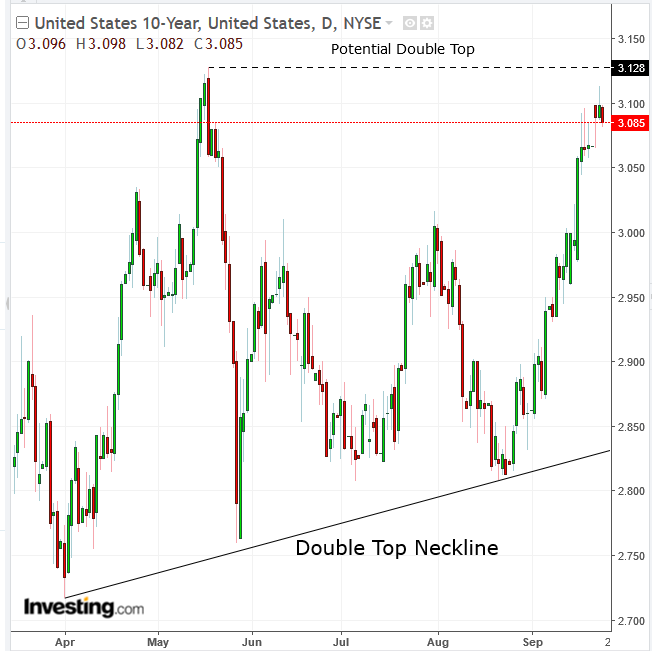 Meanwhile, yields on Treasurys are falling, as investors rotate into longer-dated bonds, with further inflows expected this month as investors seek protection from the numerous risks currently weighing on growth assets, including the US-China trade war and rising interest rates. 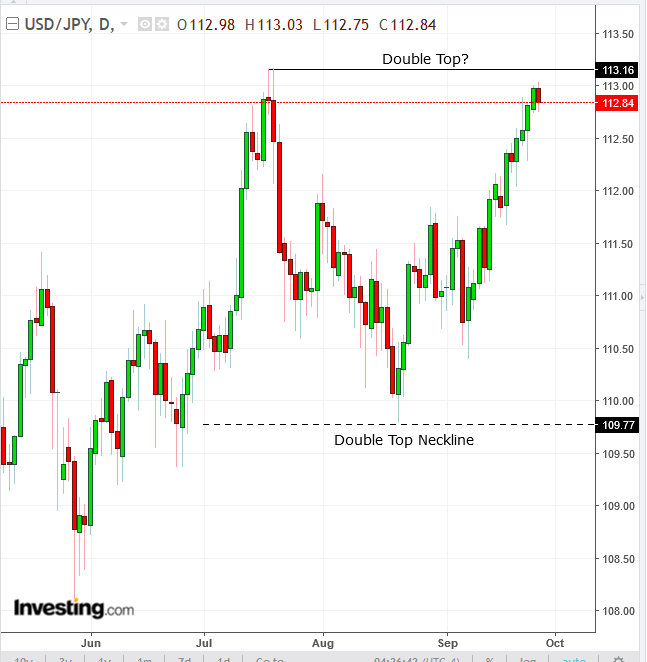 Interestingly enough, a similar pattern is developing in the dollar versus the , with the the former returning to its typical risk status and the latter to its safe-haven status. Note that the is flat today, as other currencies and drivers are pressuring it. 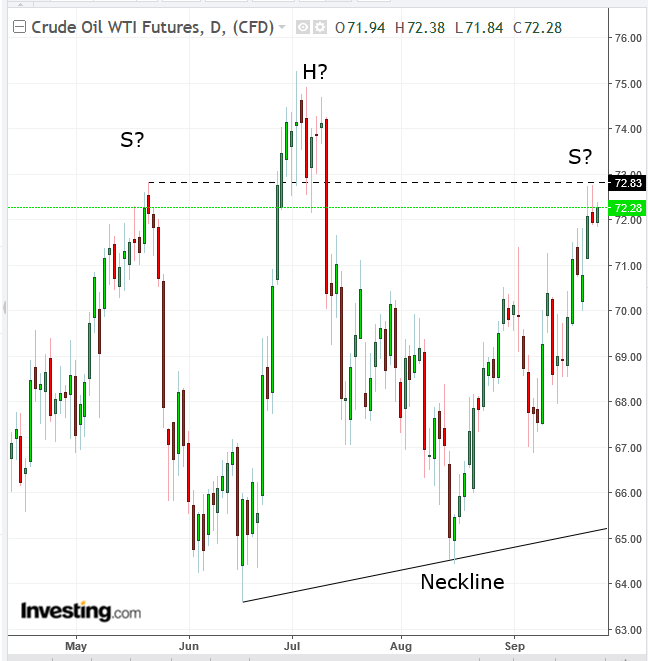 Oil rebounded from an early slump, as the interventionist rhetoric voiced by Trump at a U.N. summit yesterday poured cold water on forecasts for $100 a barrel. Technically, yesterday’s bearish shooting star confirmed the May resistance, increasing the potential for a massive H&S top, whose neckline is at $65.

Should there be a breaking point to investor confidence, prompted by world leaders’ calculated negotiation tactics, it my be the catalyst for a breakdown in oil as well as equities and the USD.