Concerns over the Italian populist government’s fiscal plans this morning overshadowed yesterday’s US-Mexico-Canada Agreement (USMCA), the new version of the former NAFTA deal, putting investors on the defensive. European stocks as well as futures on the , and were all flashing red, following their Asian counterparts lower. Meanwhile, the rallied against all major FX peers except for the Japanese .

The took a hit on mounting fears over political instability in Italy—the third largest EU member, contributing roughly 14 percent to the 28-nation bloc common budget. The also slipped, hitting its lowest level in three weeks, after the head of the Italian budget committee re-ignited fears of the country’s exit from the Union when it commented that the country would have solved its fiscal problems with its own national currency. 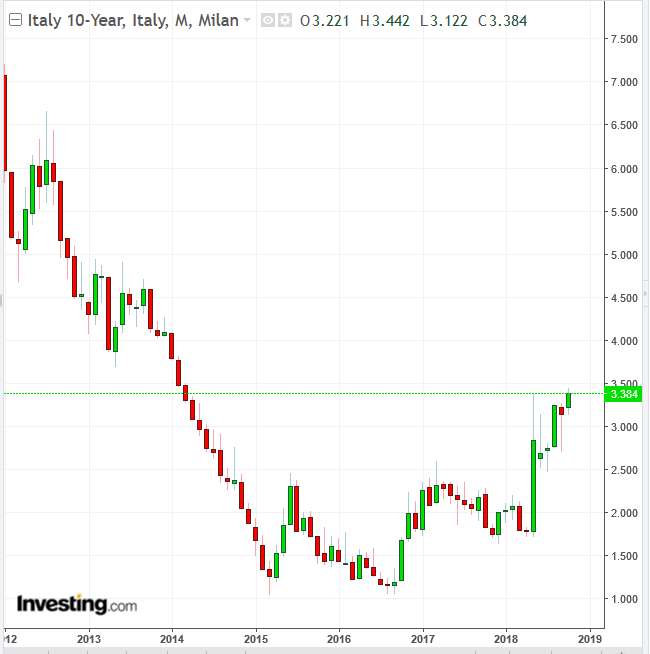 Italian bonds were hit by heightened political headwinds as well, extending a selloff to a fourth day and pushing yields to their highest level since March 2003.

Earlier, during Asia trade, shares listed on Hong Kong’s underperformed, as traders returned from a long weekend. Australia’s and South Korea’s also closed in the red.

The widespread risk-off mood seen across global assets today may better reflect the lingering market weakness that was temporarily set aside yesterday, thanks to reports of the new USMCA trade deal. The trade war between the US and China is now back on the front burner, after maritime forces from the two countries faced off in the South China Sea Islands earlier today.

At the same time, the heated political debate about President Trump’s Supreme Court nominee, Brett Kavanaugh, may have repercussions in the November congressional elections as well as impact the White House’s agenda—thereby also fueling broader market instability. In Monday’s US session, stocks ended mixed. Large caps rallied, while small caps fell the most since July after the USMCA trade deal was announced. The greenback rallied against the and the , though it fell against the other FX majors. Overall, the SPX gained 0.36 percent, mainly helped by the sector (+1.39 percent), which benefited from prices heading towards $76 a barrel and hitting the highest level in almost four years.

The Dow edged 0.73 percent higher, as multinational companies are set to be the most direct beneficiaries of the new trade deal. The industrial benchmark closed 0.35 percent below its previous closing record, which it hit a week ago Friday. Technically, the Advance-Decline line provides a negative divergence, as it failed to follow prices upward.

After giving up earlier gains of 0.75 percent, the closed 0.11 lower. The early boost had pushed it around 1 percent away from its August 30 record high.

The underperformed, tumbling 1.35 percent, as investors rotated out of small cap stocks and into large cap shares. The domestic companies listed on the Russell had provided safe haven shelter to investors during the height of the trade jitters. 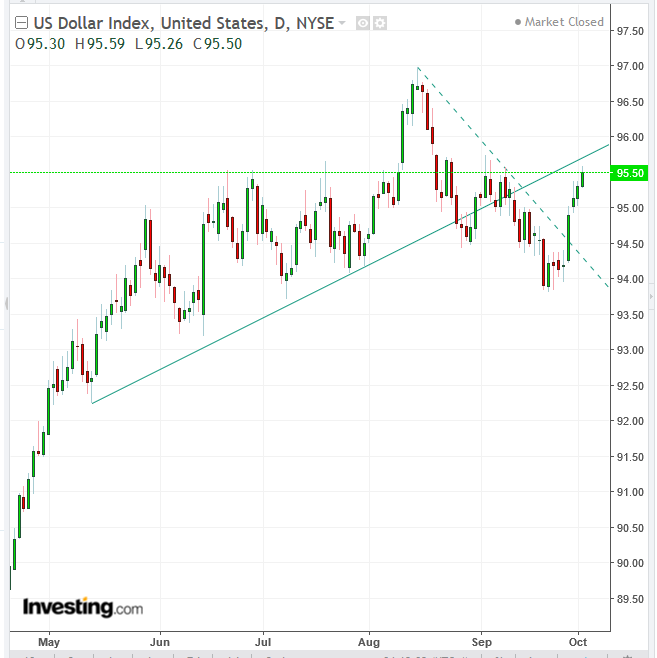 The climbed for a fifth day amid the general risk-off mood. Technically, however, the USD has to prove itself by crossing back above its uptrend line since May. It nontheless managed to extend an advance after crossing above its shorter-term downtrend line since mid-August.

Meanwhile, the slid past 15,000 per dollar for the first time since 1998 after came in lower than forecast. 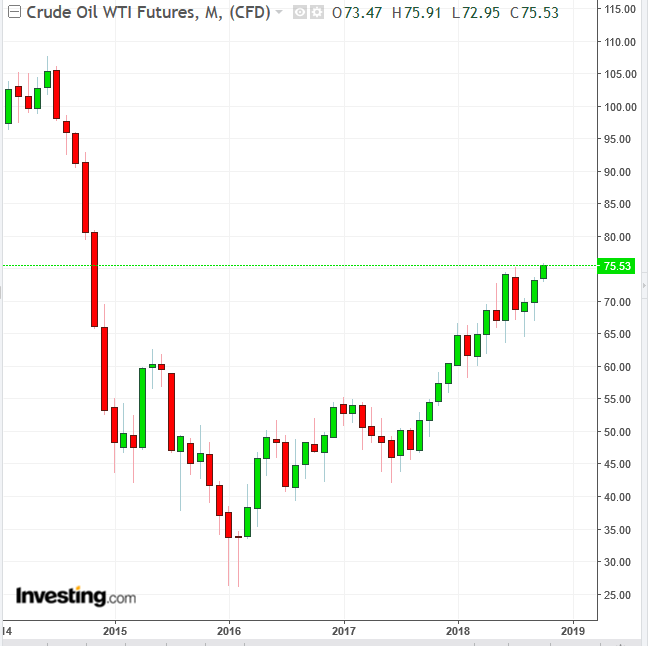 In the oil market, WTI crude held on to gains above $75, its highest level in nearly four years, as reduced added to supply glitches from Iran and Venezuela. In particular, the looming US sanctions on Iranian oil exports are poised to continue propelling prices higher.