Asian markets chaperoned Wednesday’s U.S. losses into the European session this morning, with futures on the S&P 500 and suggesting that selloffs will resume in the upcoming North American session. A skeptical market is weighing the benefits of a dovish Fed—which ruled out any rate hike this year and detailed the end of its balance sheet reduction yesterday—against a backdrop of economic slowdown. Also weighing on sentiment, President Donald Trump’s trade optimism, aired earlier this week, gave way to new warnings that U.S. tariffs on Chinese goods may apply for a “substantial” period of time.

The STOXX 600 opened 0.15% lower, adding to yesterday’s selloff, which erased two days of gains. Technically, the 50 DMA, which was approaching the 200 DMA from the bottom as bulls cast their hopes in a golden cross, may be heading towards a sell signal, as the 200 DMA forces the 50 DMA lower.

In the earlier Asian trading, most regional benchmarks posted a slide. Japanese indices and Hong Kong’s were closed for a holiday.

In yesterday’s U.S. session, equities briefly rebounded from the immediate selloff that followed signals, from the Federal Reserve, that its pause in rate hikes was motivated by a slowing economy. After the short-lived bounce, most stocks ended lower for the second day, while yields on 10-year Treasurys tumbled as investors rotated into bonds. 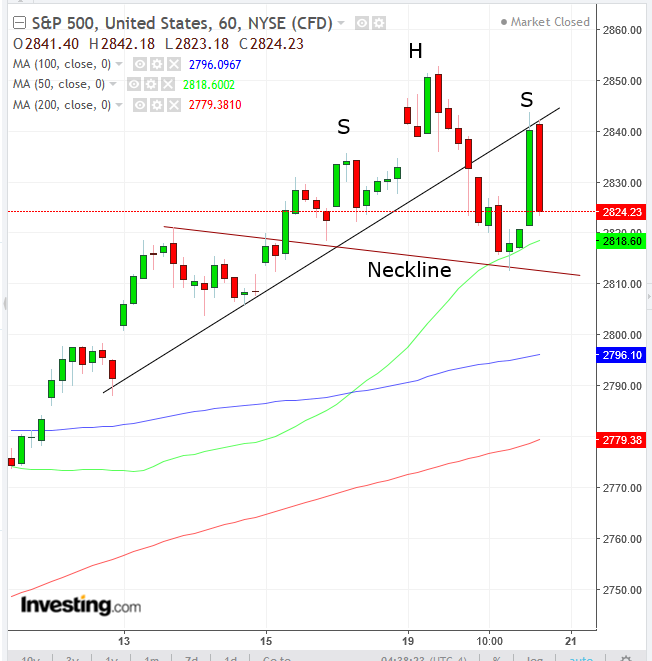 Technically, the SPX price fell below the most recent uptrend line, since the previous Tuesday, which turned into a proven resistance, erasing the dovish-Fed rally. The trading pattern may be developing a short-term H&S top. 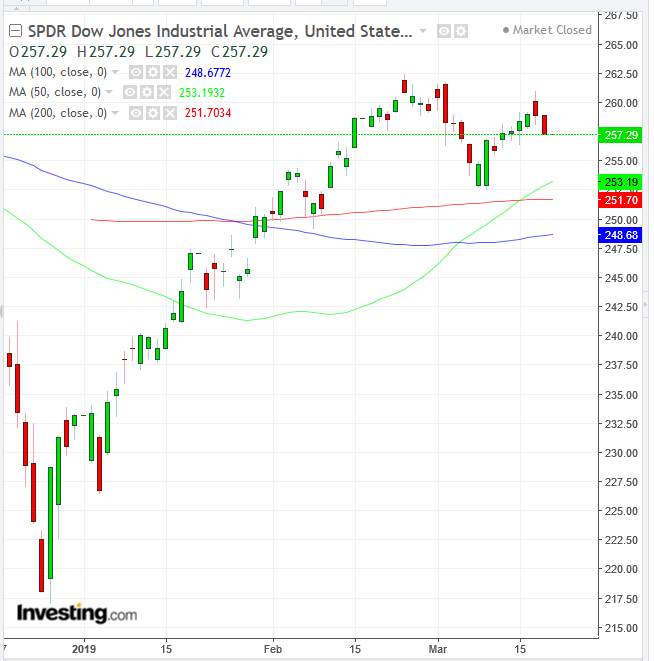 The Dow dropped 0.55%, despite the fact that a lower dollar, prompted by a lower interest-rate outlook, provided a potential tailwind for multinational companies. Technically, the gauge matched the SPX trading pattern. On the daily chart the picture is weaker, as last week’s rally failed to seal a trough higher than February’s low. While a Golden Cross was recently triggered, the 200 DMA could become the neckline of a top. 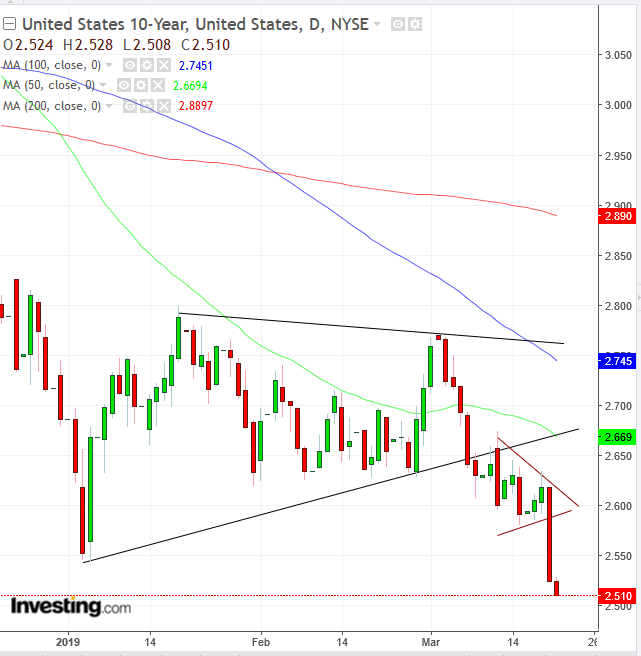 Yields slid toward 2.5% this morning, extending Wednesday’s drop to the lowest rate in over a year—in line with our expectations of a bearish pennant completion after a symmetrical pattern, bearish in a downtrend, after the long-term uptrend line was violated. This outlook was at the core of our diffidence around the rally that started after Christmas. 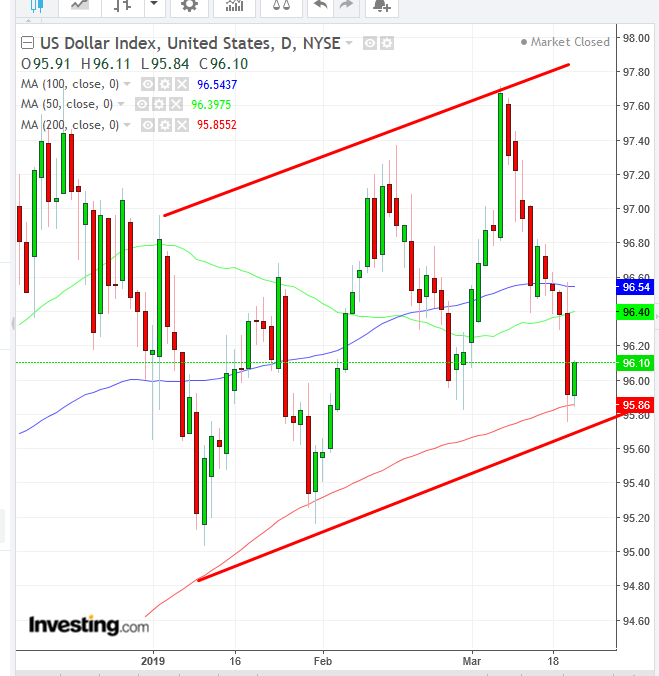 The dollar index found support by the 200 DMA, acting as an organic uptrend line and ascending channel bottom. Increased demand for Treasurys naturally boosts the greenback, which rebounded overnight from an initial Fed-driven drop. The USD also benefited from mounting pressure on the pound, which inched lower after U.K. Prime Minister Theresa May asked for a three-month extension on Brexit, heightening the risk of a disorderly separation from the EU.

Meanwhile, the yuan recovered from an initial sharp drop, but remained lower versus the dollar.

In Hong Kong, the de facto central bank once again bought the local dollar after the city’s exchange rate fell to the weak end of its trading band against the greenback. 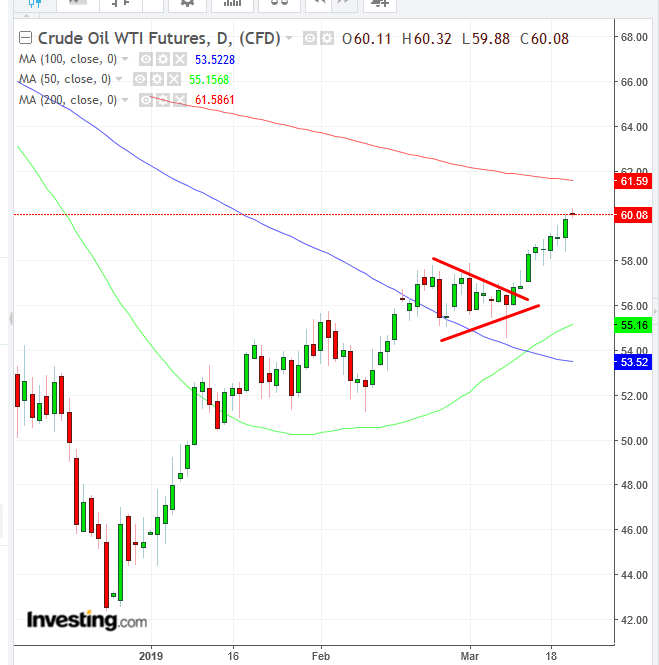 Oil crossed the $60 threshold on ongoing OPEC+ supply cuts for the first time since November, before slipping back below the key mark over the European morning session. Technically, bulls will have to demonstrate their persistence facing the 200 DMA at the mid $61 levels. From a fundamentals perspective, traders are weighing the contrasting forces of strong U.S. demand and weak European and Chinese indicators.