US futures contracts on the , , and , along with European shares, were all in a holding pattern on Tuesday as trade was muted ahead of key economic US data releases and the start of US earnings season.

Contracts on the Russell 2000—whose listed small cap firms would perhaps gain the most in a post-pandemic world and are therefore the focus of the reflation trade—underperformed, falling 0.2% into negative territory. On the other side of the cyclical spectrum, NASDAQ 100 futures, whose mega tech companies gained the most during the coronavirus lockdowns, outperformed and are 0.3% in the green.

All eyes are firmly fixed on second-quarter earnings season which starts with reports from the banks and PepsiCo (NASDAQ:) today, an apt pairing as investors will likely work up a sweat in an overactive market.

The start of earnings season could be a catalyst for considerable with the backdrop of rising inflation and a resurgence of the coronavirus. Traders will be looking for indications that companies can continue to profit in this environment as well as whether to buy into the Fed’s recurring promise, since the start of the year, that the current level of inflation is transitory.

Banks are sensitive to inflation and may provide an indication on inflation’s trajectory. figures are released later today and is expected to surge to 4%, its highest level since 1991.

Nevertheless, investors, it seems, are choosing to follow the Fed’s lead as is manifested in their trading of Treasuries, including the benchmark note. 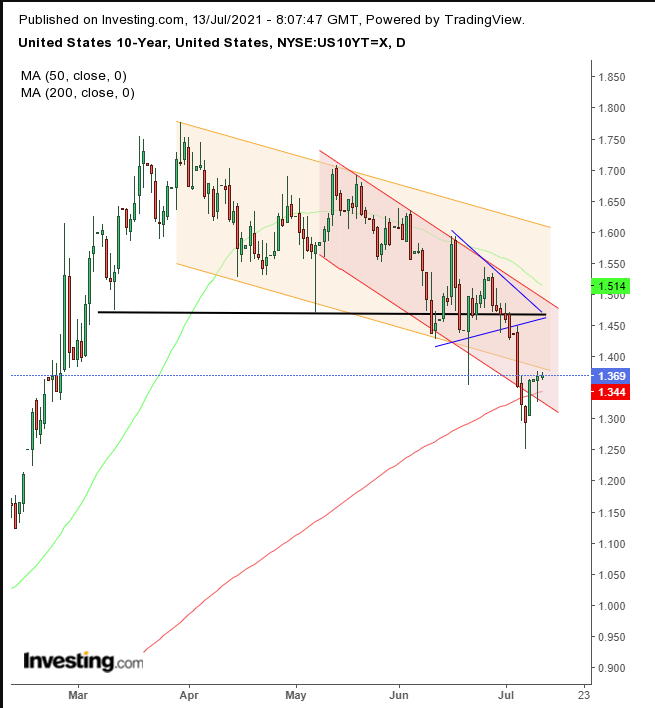 Yields are hanging by a thread, at the 200 DMA, after topping out. Even if rates climb further, such a move should be viewed as a corrective rally before a downward resumption along the falling channel turns steeper.

Former US Treasury Secretary Lawrence Summers disagrees with the Fed’s downplaying of inflation fears. He warned that markets may be underestimating the threat of inflation and pointed out that they have a bad track record of predicting future price moves.

It seems that consumers, generally considered to be “dumb money,” disagree with institutions, sometimes dubbed “smart money,” perhaps because consumers are less attentive to market fluctuations than money managers. Consumers foresee inflation surging to 4.8%, the highest expectation on record for data that goes back to 2003, according to the New York Fed’s survey of consumer expectations.

What does that mean for banks? Well, higher interest rates means banks can charge higher interest for loans, thus boosting profits on their business mainstay. Overall, banks have had a year where all the stars have been aligned. The pandemic led to record levels of savings and deposits, keeping banks swimming in money and helping them to pass all the Fed’s stress tests, thereby allowing them to increase share buybacks as well as dividend payouts. Today’s Q2 results from JPMorgan (NYSE:) and Goldman Sachs (NYSE:) will show how this has translated into earnings.

How fortunate too that the Bank of England removed restrictions on dividends, boosting the share prices of HSBC (NYSE:), Barclays (NYSE:) and Natwest (NYSE:).

While investors have been waiting for today’s key inflation data and bank earnings releases they have traded sectors including the inflation-neutral sector, which was slightly higher.

But investor optimism as well as expectations that Q2 earnings will be strong has pushed US equities to additional all-time highs as traders seem to think that profits support lofty equity valuations. The and notched fresh records while the posted its 39th record close of 2021.

rose 1% demonstrating faith in banks’ earnings, in a day that was a win for value stocks, while stocks languished with gains of under 0.08%.

The climbed for the second day, while took a step back after one of its strongest rallies in a while.

returned to a rally after yesterday’s hiccup, trading at its highest level since July 5, when prices reached 2014 levels.

Traders might get impatient if OPEC+ doesn’t reach an agreement soon at the same time as the pandemic is keeping some economies in lockdown, and potentially slowing growth in China, the world’s largest importer of the commodity. 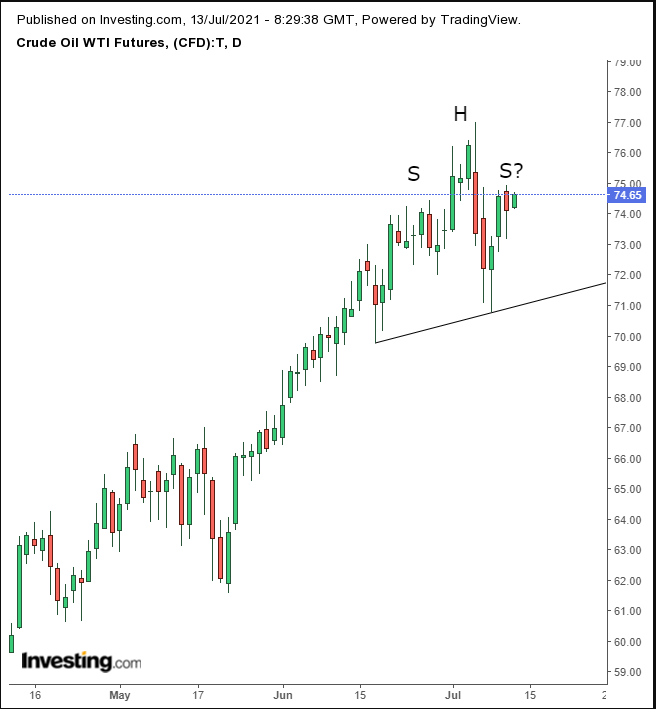 If WTI traders get too nervous, they may sell off, triggering a H&S top.