Traders around the globe shed their equity exposures on Thursday amid renewed trade fears. US futures reflected the broader shift to risk off, with contracts on the leading the dip and those on the and following suit.

The slipped lower for a the second day, gapping down 0.24 percent on the open and then extending the drop to 0.89 percent at 10.30am GMT.

US President Donald Trump’s threat to increase tariffs on $200 billion worth of Chinese goods, followed by Beijing’s vows to retaliate, soured investor mood during the previous Asian session as well.

Japan’s dived a full percentage point. Technically, the decline added confirmation to the downtrend line since the May 21 high. On the other hand, the consolidation since July 27 opens up the possibility of a pennant, a bullish pattern, following the 6 percent bounce from the July 5 low around 1,670.00

China’s plunged as much as 3.45 percent, which seems to have prompted some traders to buy the dip, trimming losses on the index to 2.16 percent. Still, shares on the mainland benchmark tumbled about 4 percent over two days and around 5 percent over six out of seven sessions, wiping out the preceding three-day jump of 4.85 percent—the biggest in two years. Technically, however, the bounce off today’s low confirms the support of the Three Advancing White Soldiers.

Hong Kong’s sank 2.21 percent, hitting a four-day plunge of 4 percent. Technically, the index provided a downside breakout to a consolidation since June 26, as it reached the lowest level since September and extended the downtrend since the January 20 all-time high, under 33,500, as it posted a lower trough.

South Korea’s fell 1.6 percent, erasing five days of gains. Technically, it penetrated the bottom of a symmetrical triangle, bearish after the near-14 percent selloff from January 29 record high above 2,600, which topped out with a massive Complex H&S pattern spanning 11 months. Still, with only a 0.3 percent penetration and a 0.14 percent close below the triangle, investors should beware of a bear trap.

During the US session, the retreated 0.1 percent, weighed down by stocks (-1.39 percent), which were tracking prices lower, and shares (-1.35 percent), the most sensitive to tariffs headwinds.

The sector found some solace (+0.9 percent) from the most significant two-day selloff since February, helped Apple (NASDAQ:)’s earnings beat offset some of the losses sparked by the downbeat results from Netflix (NASDAQ:), Twitter Inc (NYSE:) and Facebook (NASDAQ:). This helped the climb 0.46 percent and fare as the only US major to close in the green. 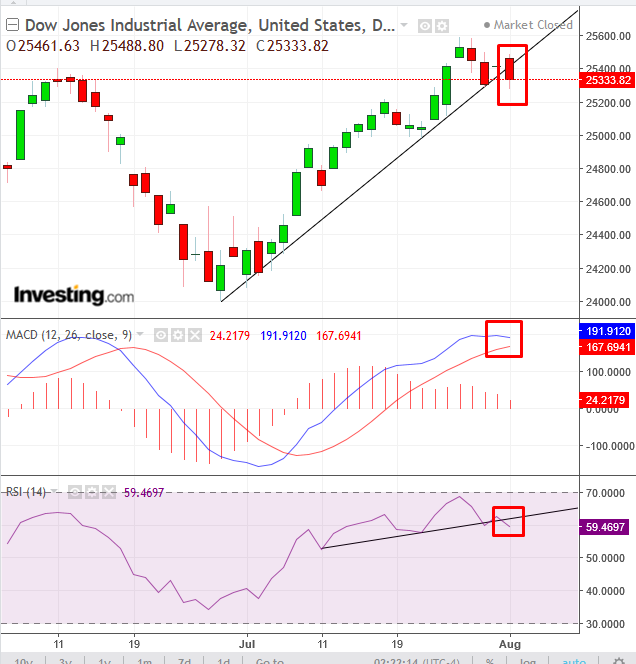 slid 0.32 percent, as investors tend to shed the mega-cap companies listed on the index when trade worries escalate, due to their strong dependence on exports for business growth. Technically, the index crossed below its uptrend line since June 28; the MACD turned lower, and the RSI confirmed that momentum is falling with prices.

The slipped 0.1 percent lower. Small caps listed on the index should benefit from reassurance by the Fed yesterday that it will press ahead with its tightening plans, , despite Trump’s recent criticism. Smaller companies have tended to historically perform well in a rising interest rate environment.

Yields on Treasurys wavered around the 3.00 percent psychological level, after closing above it for the first time since May 21 yesterday. The move follows the Federal Reserve’s while making it clear borrowing costs are gradually heading higher.

Meanwhile, Japan’s yields touched 0.145 percent, the highest level since February 2017, before subsiding as the Bank of Japan offered to buy bonds. 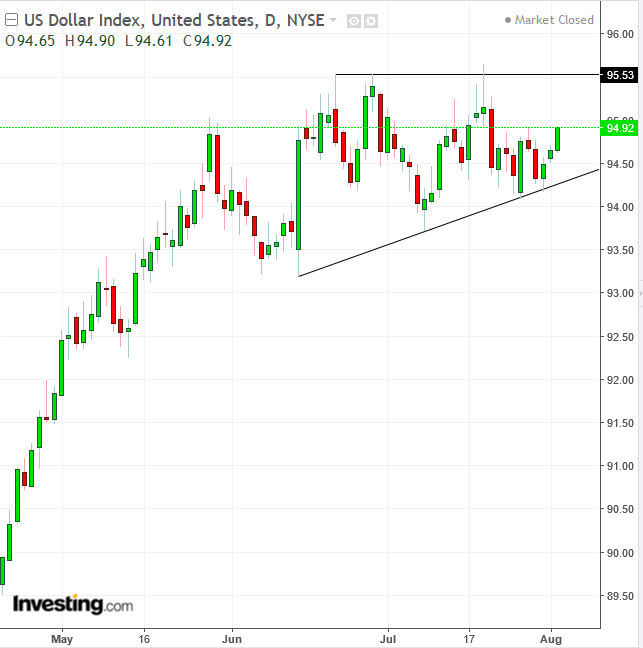 The tracked rising yields, advancing 0.23 percent for an aggregate three-day gain of 0.58 percent. This could help the Dollar Index finally breach the 95.5 area, where sell orders have been pressuring it since June 21. The USD ascent kept weigh on emerging market currencies and equities, as investors rotate into dollar-denominated assets.

The dropped 0.33 percent to a weekly low ahead of the Bank of England’s , even if policymakers are expected to raise rates to 0.75 percent from 0.5 percent.

The tumbled about 2 percent, hitting a fresh record low as the US imposed sanctions on the country over the imprisonment of a US citizen. 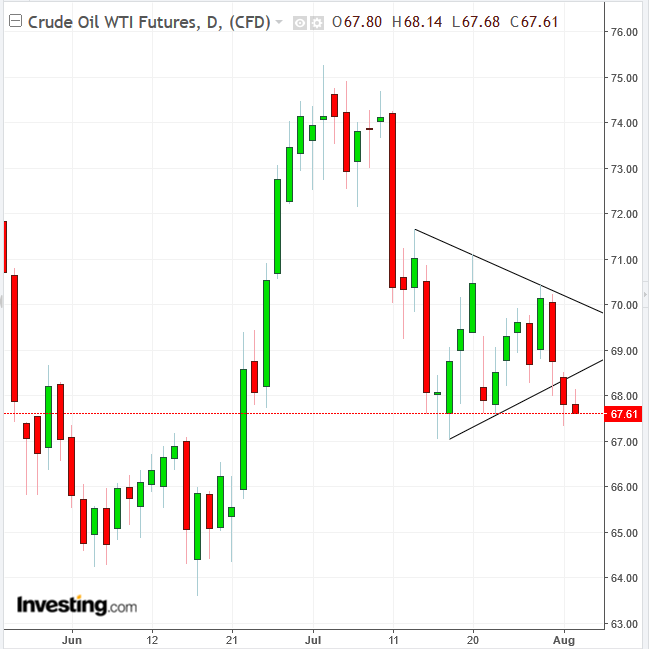 Oil edged 0.18 percent lower, giving up a half-percentage point gain, after the Energy Information Administration to 409 million barrels. Inventories are now 1 percent below the five-year average for this time of the year, from 5 percent below that average one month ago. WTI prices were also boosted by the stronger dollar, which denominates the commodity.