Global stocks opened strongly this morning though futures on the , and wavered as investors struggled to set aside ongoing trade risk, amid waning signs of a reprieve.

The rebounded after tumbling 2.2 percent last week on concerns over a potential no-confidence vote for UK Prime Minister Theresa May, as well as persisting Italian budget woes. Healthcare and construction companies led the gains, with Novartis (SIX:) climbing 1.9 percent at the open after being its rating was raised to ‘buy’ by Goldman Sachs Group, and Novo Nordisk (CO:) surging 4.4 percent after being upgraded by JPMorgan. The is gaining ground as investors remain alert for any further Brexit developments.

The edged higher as May prepared to appeal to business leaders to help deliver her Brexit deal as she fights almost insurmountable Parliamentary opposition.

Earlier, during the Asian session, equities posted a mixed performance after US Vice President Mike Spence said at the Asia Pacific Economic Cooperation (APEC) summit on Saturday that the US will persist with its trade policy, expecting China will back down—thereby providing little hope to investors that any resolution will be forthcoming in the foreseeable future. Still, Friday’s Wall Street gains boosted global trading, with the eking out a 0.07 percent rise. 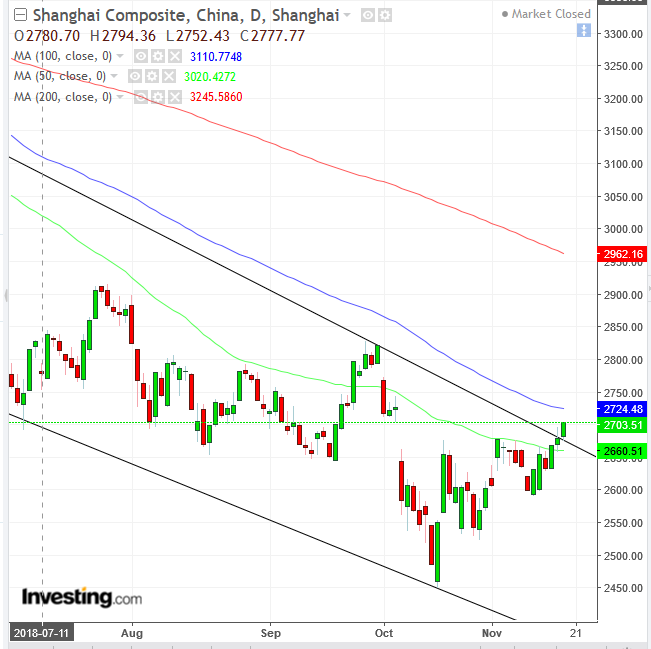 Despite heightened trade tensions, Chinese shares outperformed regional peers, with the gaining 0.91 percent. Property developers and financial companies propelled the index higher amid ongoing accommodative policy measures and market expectations of more to follow. Technically, the index broke above a falling channel since February, after having scaled above its 50 DMA. The next technical challenge for traders will be the 100 DMA, above today’s close.

While Pence’s attack on China fell short of pressuring Chinese stocks, it took a toll on two countries dependent on China’s economy, Australia and New Zealand, weighing on their shares and currencies. Australia’s dropped 0.64 percent, underperforming regional peers; the slipped 0.49 percent. The gave up 0.38 percent and the slid 0.57 percent. Technically, the NZD met with the resistance of the 200 DMA.

Meanwhile, Japan’s widened in October, but its exports rebounded after being hit by natural disasters through September. Data from the Ministry of Finance showed grew 8.2 percent from the same month a year ago. In September, exports fell 1.2 percent from the previous year in the first decline for the world’s third largest economy since 2016. in October grew 19.9 percent year on year. The ticked 0.65 percent higher.

US stocks gained ground on Friday but ended lower for the week. Apple (NASDAQ:), a key component by weighting on both the and the , suffered its worst week in seven months. The inched up and the yield on Treasurys hit the lowest close since October 2.

The Dow is the second best performer among US majors year-to-date and boasts the strongest technical picture, whereas the , which works as a trade risk proxy, has underperformed its peers and is showing the weakest technical outlook. That suggests that the current risk-off mode is not motivated by trade risk fears.

As a matter of fact, the fundamentals support a continued bull market. According to US consultancy Gallup, this is the best economy in 19 years, with the highest consumer confidence in 14 years. Reinforcing the upbeat economic backdrop, corporates have just posted their best earnings results since the financial crisis—though it was also one of the most volatile reporting season in recent years. Trading activity in the US may be thin this week ahead of Thursday’s Thanksgiving holiday. 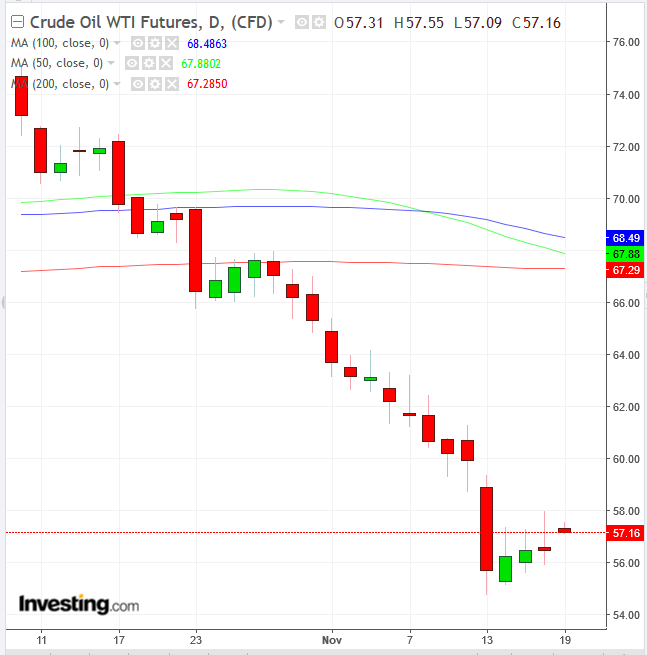 climbed above $57 a barrel in New York following its recent fall into a bear market, though investors are watching anxiously for any signal from OPEC on production cuts.

Investors are assessing equity and credit markets for fresh signs of volatility amid enduring concern over trade conflicts and world growth, challenged by rising US interest rates that drive financing costs higher—a headwind that was probably a key trigger of the recent selloffs. Tension between Xi Jinping and Pence quashed optimism that relations would improve at the G20 meetings starting next week, as the APEC group failed to agree on a joint statement for the first time in its history.