Global stocks showed signs of a rebound on Thursday, following reports that US and Chinese officials may resume high-level talks on trade issues. Investors have begun rotating out of safety trades including the , which gave back just a small amount of yesterday’s outsized gains. Treasury yields trimmed most of yesterday’s drop as investors moved to riskier assets.

European shares, along with futures for the , and , are all flashing green, reversing Wednesday’s sharp global selloff which saw sliding the most in two years and US energy and material producer shares tumbling at least 2 percent—pushing the into its heaviest decline in two weeks.

Where are equities headed next? While pundits warn there are no winners in a trade war, US shares stand out as the outperformers. While Asian benchmarks (except for Australia’s ) are in a downtrend and European indices are drifting, US majors remain in a clear uptrend.

We believe this will almost certainly create a virtuous cycle for US assets, prompting international investors to shed foreign holdings, sending them yet further down, even as these same investors ramp up their US exposures—driving up returns on US markets. 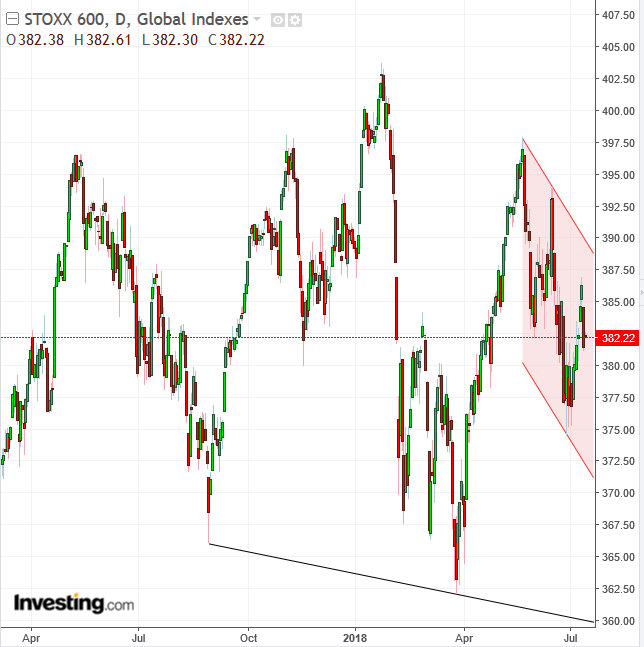 The opened 0.25 percent higher—posting a more modest gain than Asian counterparts—but was pressured lower in early trade. Media companies and car manufacturers outperformed, helping the pan-European index move higher—to about 0.4 up at the time of writing. Technically, yesterday’s plunge extended the medium-term downtrend within a falling channel since the May peak, while potentially developing a massive H&S top since mid-May 2017.

Earlier this morning, during the Asian session, Chinese shares made up for Wednesday’s underperformance. The jumped 2.2 percent, wiping out yesterday’s deep losses, adding another 0.35 percent in gains, setting up the mainland index for its highest close since June 29. Technically, today’s vigorous rebound extended a turn-around from the July 6 low, triggering the most reliable buy signals of the MACD and RSI in five months, after these indicators reached their lowest levels since February, at the end of the global January selloff.

Hong Kong’s didn’t perform as strongly as its mainland counterpart. It settled 0.60 percent into positive territory after fluctuating between a 0.3 percent loss and a 1.17 percent gain.

South Korea’s swung even more widely, between a 0.8 percent gain and a 0.1 percent loss, only to finish very near today’s opening price, 0.2 percent above yesterday’s close. 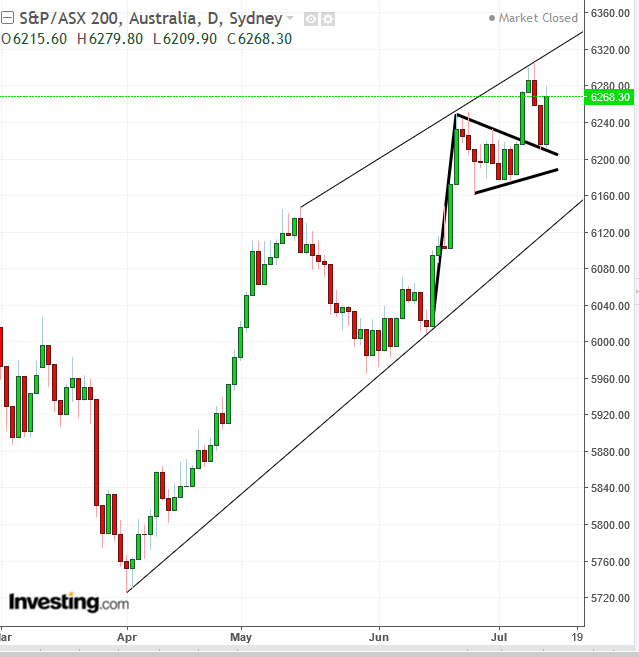 Australia’s S&P/ASX 200 climbed 0.85 percent this morning, erasing yesterday’s losses and sealing an additional 0.15 percent advance. Technically, as we’ve been saying for a week, the Aussie benchmark has completed a bullish pennant pattern. Price moves on Friday generated the upside breakout, then extended gains on Monday. Tuesday and Wednesday trading completed a return-move, with prices penetrating the pennant slightly but closing above it. Today, prices bounced off the support of the pattern.

On Wednesday, commodities took a hit, with oil’s retreat pushing WTI toward $70 a barrel and metals and crop futures slipping lower. 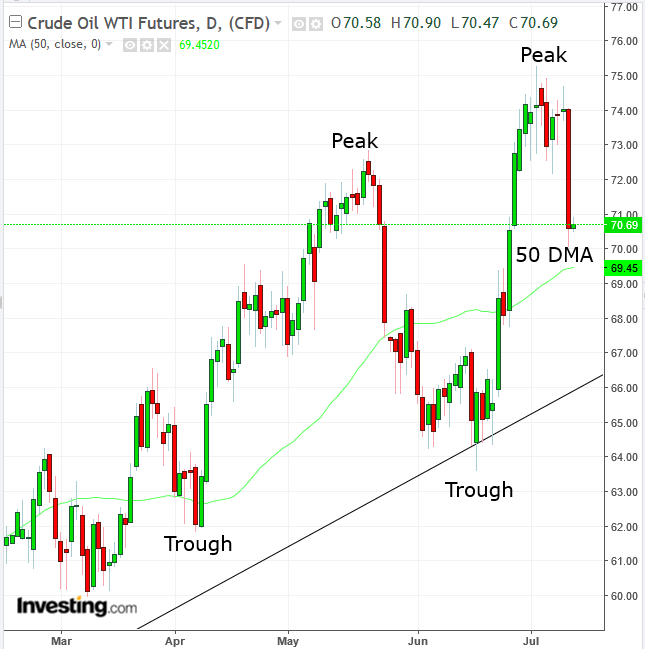 WTI rebounded from a 4.65 percent plunge, its sharpest daily decline in almost 13 months. The selloff was spurred by oil production resuming in Libya as well as by the increased outlook for waning demand, as a global trade war could hinder economic growth. Technically, the July peak at $75 verified the integrity of the uptrend, and the 50 DMA supported the plunge, suggesting there is demand, at the right price.

In the US equity market, Caterpillar (NYSE:) and Chevron (NYSE:) led US losses, weighting on the . On the other side of the Pacific, during yesterday’s trade, emerging market shares fell the most since the end of June.

EM currencies also remain under pressure, dragged lower by two main drivers: the US-China trade war narrative made them look even riskier, while the stronger dollar prompted investors to shift into US assets. 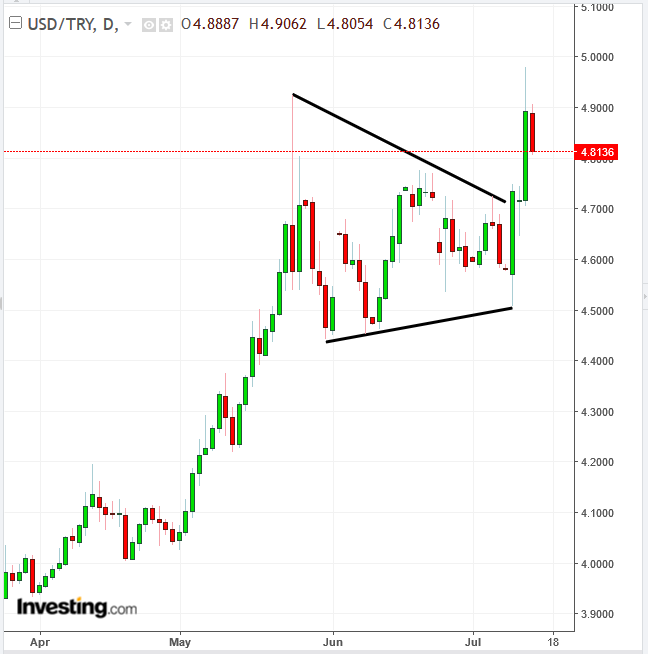 Speculators buying the dip helped the recover, after hitting a fresh record low when a local television channel reported that President Recep Tayyip Erdogan sees both the exchange rate and interest rates dropping. Technically, yesterday’s fall caused a USD/TRY upside breakout to a symmetrical triangle, suggesting further declines are in the cards for the lira.