Equities in Europe opened slightly higher, while futures on the , and were mixed ahead of key earnings reports and after disappointing economic data in China weighed on all major Asian indices.

The lackluster equity performance this morning in Asia begs the question of whether investors were concerned with China’s ability to withstand the ramifications of a trade war with the US, or rather whether they were spooked by the weak and figures released earlier from the world’s second-largest economy.

Which perhaps raises the even larger questions of whether the US can continue fueling economic expansion on its own. For now, China’s is in a bear market, and both fundamental and technical signs are pointing to further losses. The is now at a low for the year. Conversely, US stocks are eyeing all-time highs and the is just one percent below its one-year high.

For the time being, we believe this market dynamic will make US assets even more attractive to global investors, especially if the US economy confirms its steady growth pace and corporate earnings meet expectations.

The pan-European was pushed higher by media company stocks this morning, offsetting losses in the automotive sector, most likely sparked by ongoing trade uncertainty.

During Asian trading, equities slumped on lower volumes, as Japanese markets were closed for holidays. Local trading wiped out gains from the previous North American session that had propelled US majors towards technical milestones while pushing them closer to all-time highs.

China’s mainland Shanghai Composite fell as much as 0.9 percent but then trimmed losses to 0.6 percent. The 50 DMA (green) is threatening to cross below the 200 DMA (red), executing a Death Cross. That negative sentiment may be what’s needed to push prices below the January 2016 low and below 2600, which would form a new, lower trough.

While China’s second-quarter GDP growth slowed to 6.7 percent, down from 6.8 percent in the previous quarter, it was in line with expectations. Year-on-year industrial output undershot forecasts of 6.5 percent, falling instead to 6 percent.

This comes on the heels of a trifecta of poor economic data in June, when China’s May retail sales, industrial production and infrastructure investment each came in significantly lower than expected, hitting multi-year to all-time lows.

On the other hand, in China increased 9 percent in June, beating the 8.8 percent expectation; advanced 6 percent in the first six months of the year, in line with expectations, and jumped to the record high of $29 billion, potentially suggesting that, for now, overall momentum for global demand remains on course.

However, Chinese exports may soon take a hit from trade tariff headwinds, as Washington has recently upped the stakes by threatening to slap 10 percent levies on an extra $200 billion of Chinese goods.

Hong Kong’s rebounded from a 0.8 percent drop to eke a gain, as the utilities sector offset slumping property and materials stocks. 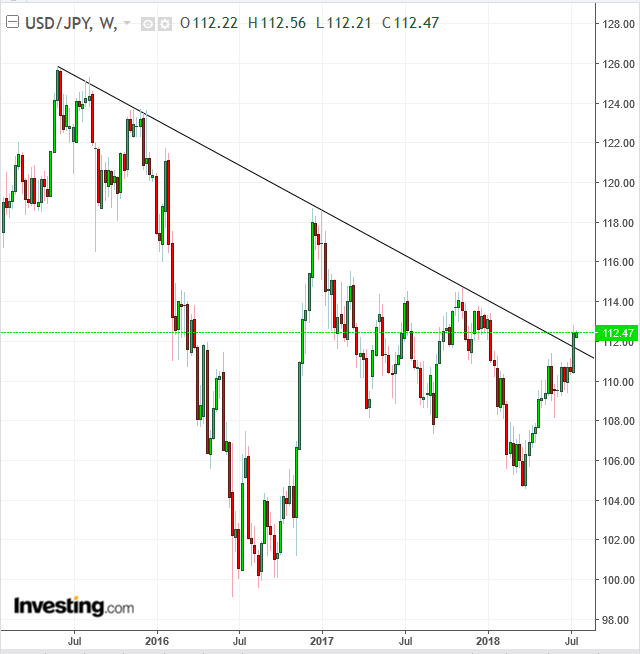 Meanwhile, the slid near its weakest levels since January, resuming last week’s 1.75 percent drop, which had marked its biggest weekly loss in 10 months. Why is Japan’s currency losing ground even against a weakening dollar? Is it an indicator that investors have overcome their worries of global trade glitches, or is the interest-rate differential favoring the greenback against the yen, whose non-existent yield risks overshadowing its haven status? Some are going as far as to question whether the yen’s safe haven status will soon be a thing of the past.

Technically, the dollar broke a falling trendline since June 2015.

Meanwhile, the yield on US Treasurys is inching higher, an encouraging sign for equities, as investor demand shifts away from secure assets. 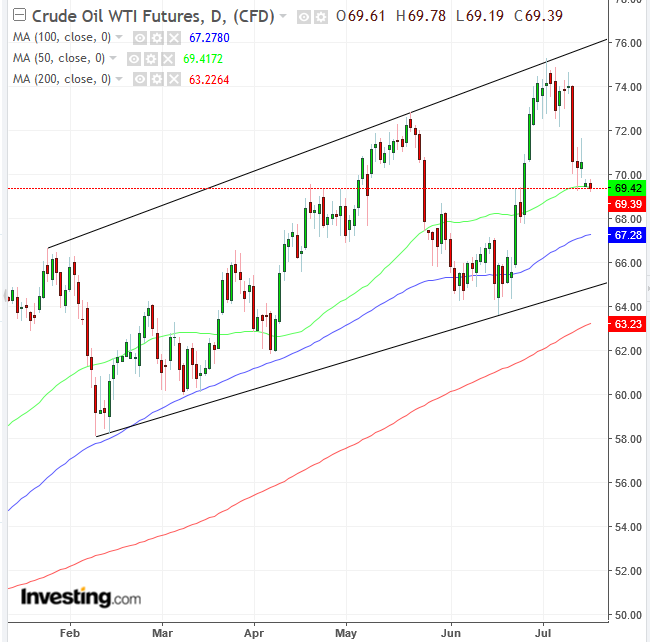 fell below the key $70 level, amid speculation that the Trump administration is considering tapping into emergency crude supplies. Technically, the price drop is a correction within a rising channel. For now, prices found support by the 50 DMA, and the 100 DMA (blue) is “guarding” the channel bottom from above, as the 200 DMA (red) is “protecting” the channel bottom from below.