Equities in Europe and US futures on the , and took their cues from Asian selling amid ‘s record 13-day loosing streak and mixed economic data from China.

The slid lower at the open, as jitters in the energy sector and WTI’s ongoing slide continued to wreak havoc across markets. The price of the pan-European benchmark has been trading at the very bottom of the session, demonstrating no takers for the dip.

Yesterday, price glitches in energy stocks overshadowed Tuesday’s newfound optimism over a trade deal—which remained mostly a matter of headlines rather than translating into any meaningful price action.

The morning session saw shares on an upswing after White House economic adviser Larry Kudlow told CNBC that he US and China are talking on “all levels” of government. That followed an overnight report that China’s Vice Premier Liu He will pave the way for a meeting between the leaders of the world’s two biggest economies later this month.

(-0.30 percent) and (+0.45 percent), which should have benefited from more upbeat trade headlines, failed to stand out, with sector heavyweights such as Caterpillar (NYSE:) (+0.77 percent) and 3M (NYSE:) (+0.68 percent) falling short of achieving larger gains.

The fell 0.15 percent for a total four-day setback of 3.3 percent. (+0.56 percent) outperformed and (+0.42 percent) managed to post a relatively upbeat performance.

The dropped 0.4 percent for a combined three-day loss of 3.45 percent. Technically, the price yesterday fell below the 100 DMA, rebounded intraday to the underside of the moving average and fell back down. However, after reaching 0.35 percent above the 200 DMA, it closed off the low of the day, about 0.7 percent above the most observed moving average.

The remained flat yesterday. However, with a four-day loss of 4.89 percent, it still was the worst performing index during this rout. However, it is noteworthy that the tech-heavy benchmark manage to limit losses to 0.03 percent amid an ongoing tech drubbing, even after Apple (NASDAQ:) admitted to a serious problem with its iPhone. Might this be signaling the end of the tech-led selloff? 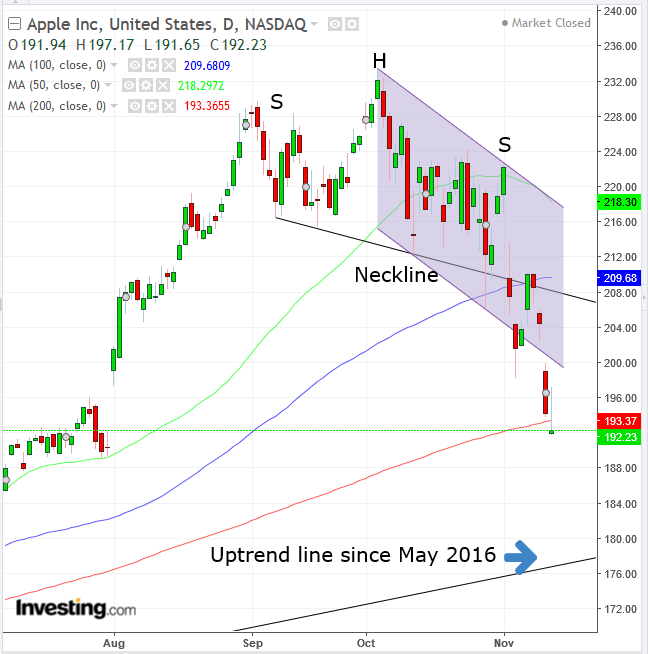 Apple fell 1 percent during yesterday’s session, bringing its four-day dip to a whopping 7.75 percent. Technically, the price slid below the 200 DMA for the first time since April, which is bearish, but it formed an inverted hammer, a bullish candlestick, which may suggest an upward correction within a short-term and mid-term downtrend, within a long-term uptrend.

The uptrend line since May 2016, is currently below $180, about 8 percent below the current price, and rising. Traders could wait with a long position for a further fall to the full correction of the long-term uptrend or for an upward correction within the short and mid-term downtrends for a short.

The gave up 0.16 percent, its fourth day of losses for a combined drop of 4.35 percent. Technically, the 50 DMA is on top of the 200 DMA and about to execute a Death Cross. 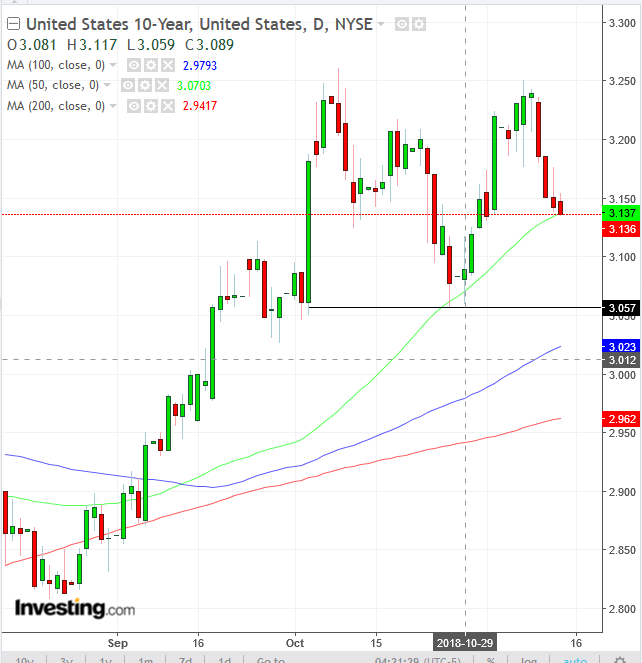 The yield on Treasurys ticked lower for a fourth day, about halfway down to the neckline of a double-top. For now, it found support of the 50 DMA.

In FX markets, the recouped some of yesterday’s losses, tracking higher Treasury demand. 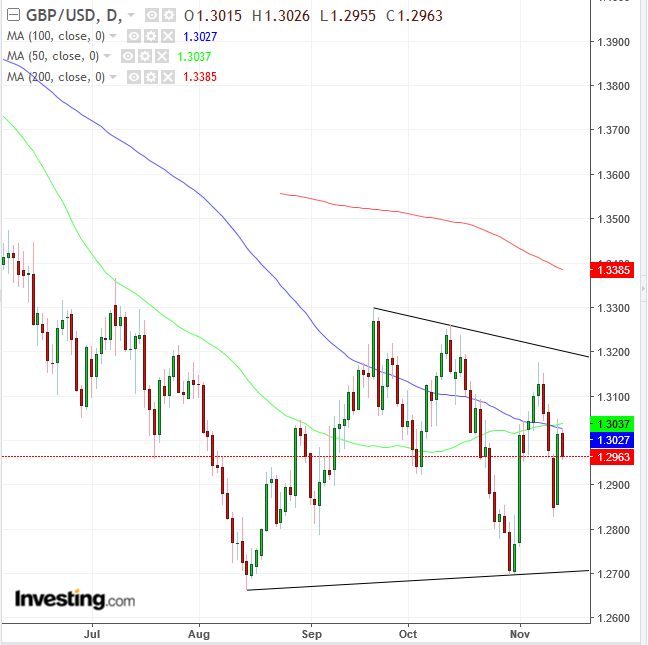 The dropped as traders waited to see whether Theresa May can persuade her cabinet to back her Brexit deal at a key meeting today. Technically, cable is forming a symmetrical triangle, presumed to be a continuation pattern, as both supply and demand increase positions, till they meet in the middle. The trend is decided with a decisive breakout, up or down.

rallied to an almost two-month high and the country’s sovereign bonds gained ground as the slump in oil prices deepened, easing investor concerns over the oil-importing nation’s .

Focus will now turn to Federal Reserve Chair ‘s speech later today, with some observers expecting Powell will calm worries that the central bank is pushing its interest cycle too far. That comes after the latest read on China’s economy, where missed estimates, though held up. Any signal from the Fed may thereby help shed more light on the overall ‘end of global growth’ narrative.