European stocks opened higher on Monday, while US futures on the , , and struggled as traders consider the path to global economic recovery while closely watching US earnings. The slump in yields, which started the recent bullish bout, is making us question whether there is another trend emerging.

Bitcoin recovered after sliding back under $55,000 over the weekend, after its all-time high last week.

At the time of writing, futures were all in the red with contracts on the NASDAQ 100 just marginally lower, while contacts on the S&P 500 and Dow retreated even more steeply after all three indices rosing for four weeks in a row.

Contracts on the Russell 2000 are underperforming significantly. As such the week seems to be starting off with a retreat on last week’s reflation trade. 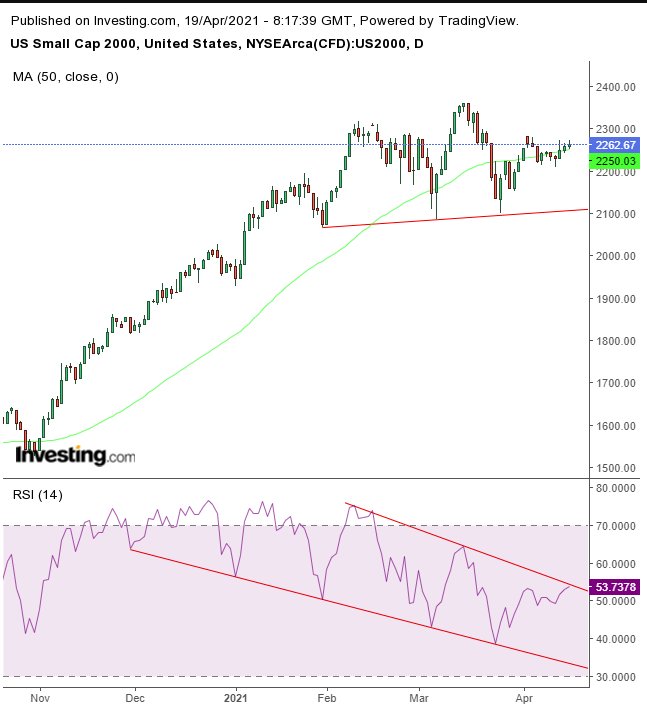 The small cap index continued to languish in what may still prove to be a H&S top, while the RSI has been providing a negative divergence. A downside breakout of the pattern’s neckline —the trendline that connects the lows—will complete a reversal.

European shares on the added to seven weeks of straight gains.

Traders in Asia weren’t any more decisive than their global counterparts, with all but one index flat. China’s outperformed amid easing concerns about the health of state enterprise China Huarong Asset Management (HK:), a distressed-debt manager. On Friday, China’s financial regulator, in its first official comment since the company missed the deadline to report earnings, said that Huarong had ample liquidity. The statement reduced fears of financial contagion and drove a rally in Huarong bonds.

Strong US and China economic numbers offset concerns about the ongoing spread of coronavirus variants—total new infections for the last seven days topped 5.2 million, the most in a single week since the pandemic started—boosting the to a new all-time high last week.

Nevertheless, whether because of a virus that just won’t go away, or vaccines that are not rolling out fast enough to people around the world, or ongoing Fed promises of not raising rates, the Treasury yield has been falling. Given that rising yields started the equity recent rally, it is possible that equities will pull back for as long as yields drop. 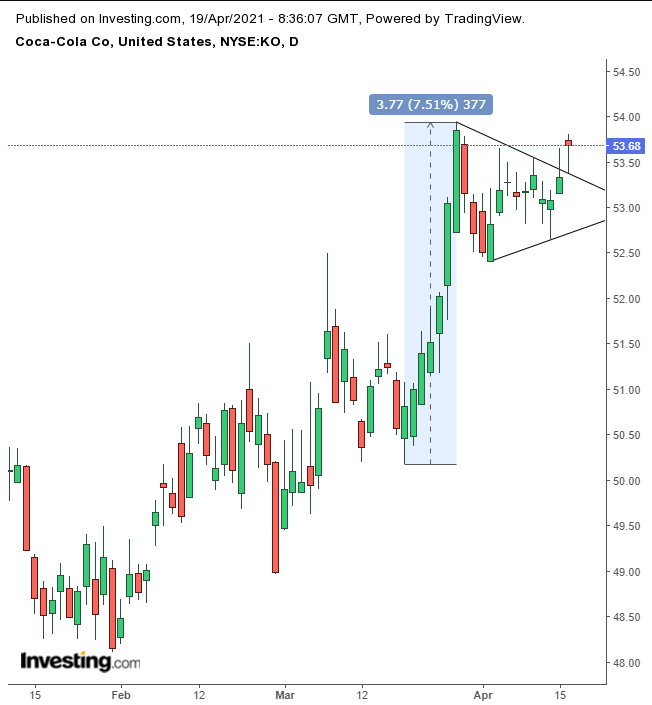 While Coca Cola closed a hammer on Friday, which is potentially bearish, it completed a pennant, targeting the $58 level.

IBM appeared last week to have blown its pennant, along with the RSI completing a H&S top in momentum. 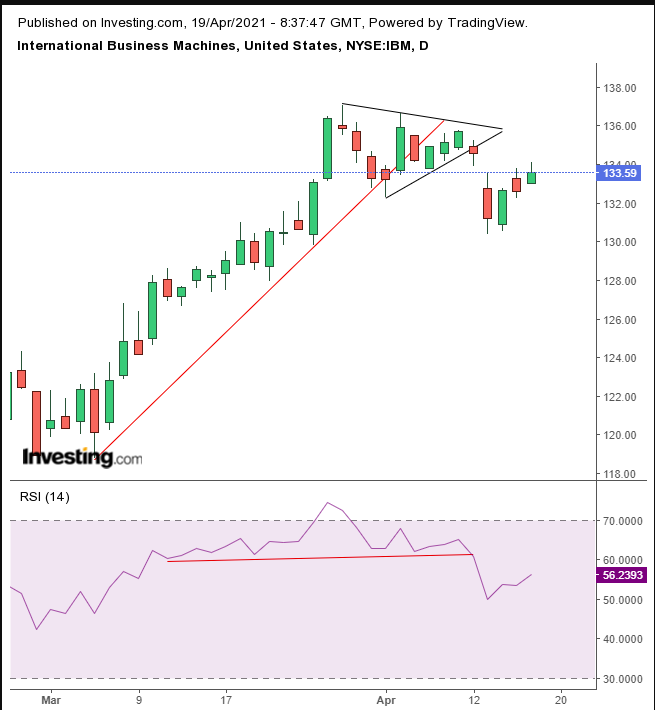 It seems investors are expecting to be disappointed in earnings.

United Airlines has been trading along a H&S top with the RSI demonstrating a negative divergence with momentum. 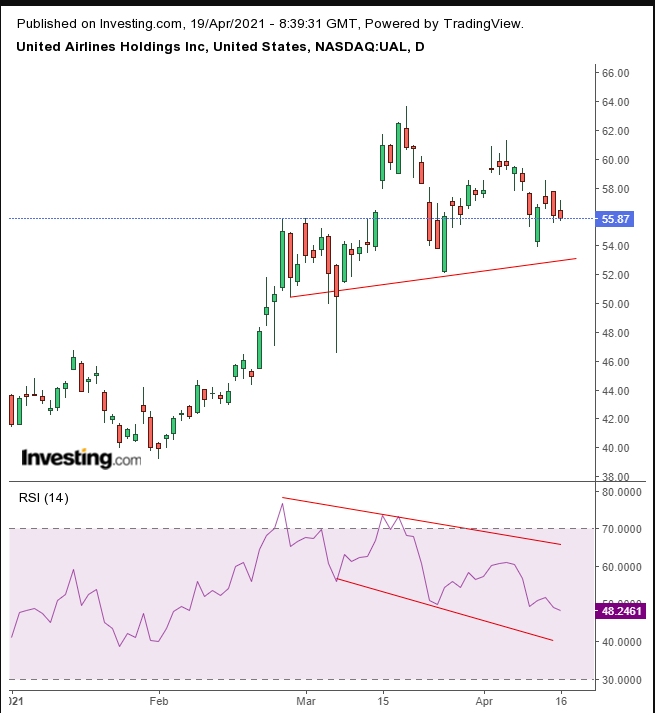 Yields on the Treasury note completed a top, after falling out of a steeper rising channel since January. Rates recently slipped below their 50 DMA. 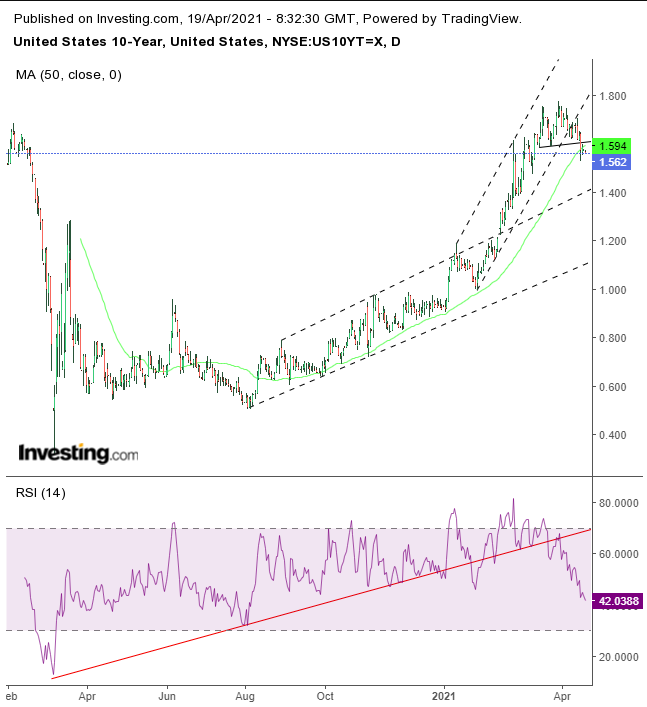 The RSI predicted all this when it slipped below its own uptrend ahead of time.

The crashed through an important support, resuming a the fall that follows the rising, bearish wedge. 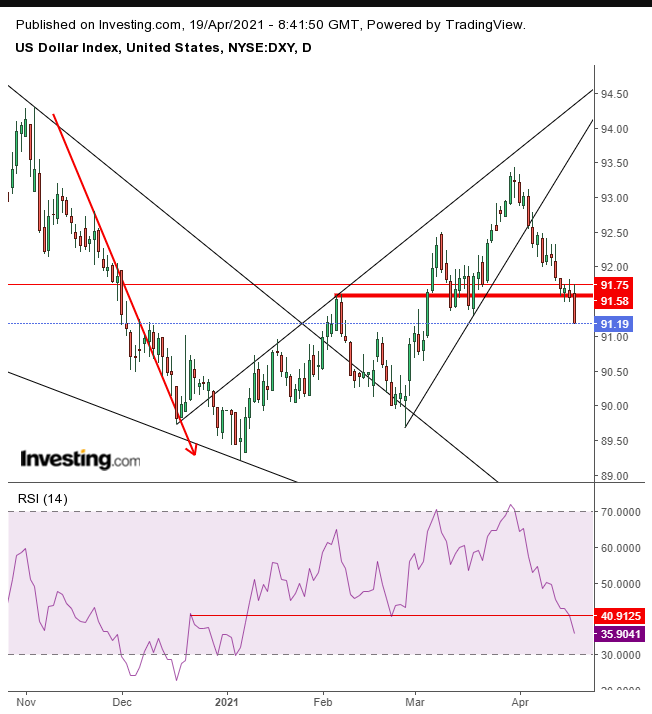 The RSI supported the drop with the breaking of its own major support. However, unless the dollar breaks to a new low below the Jan. 6 bottom, we maintain our long-term bullish view, due to the preceding falling wedge since the March peak.

Naturally, pushed higher, after completing a double bottom. However, the RSI is testing the top of its falling channel, mirroring the price’s falling channel, as if to say that momentum may have run out and the price won’t get as far as the channel top. 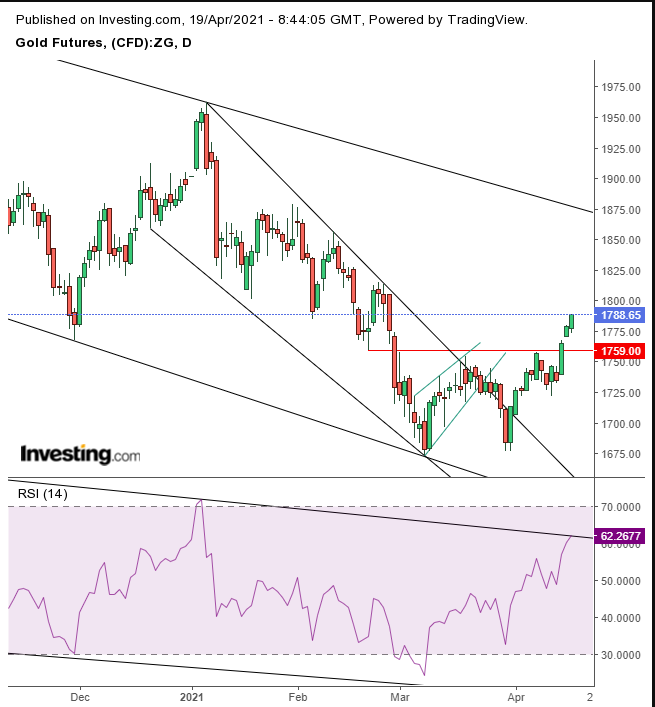 While the precious metal did complete a small double bottom, blowing out a rising, bearish flag, it is still in a falling channel since the March peak.

seemed to have found its footing after falling the most since February over the weekend, rebounding slightly. 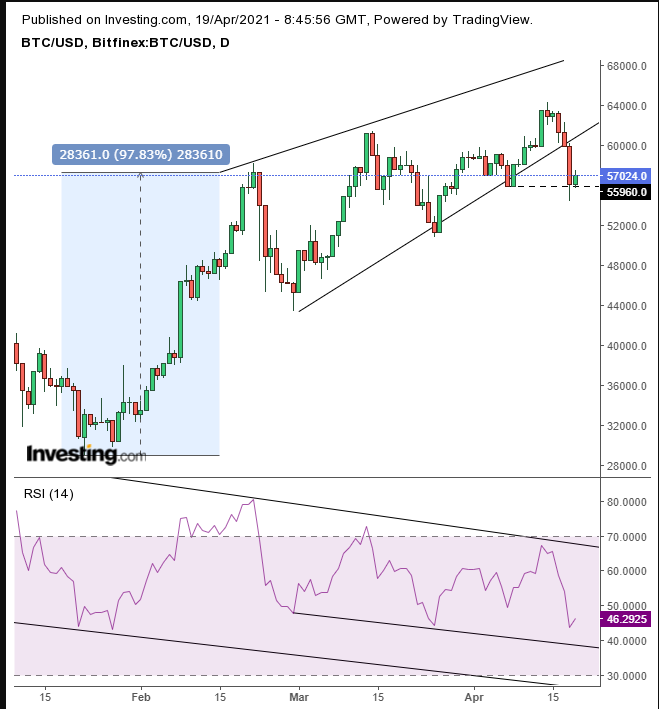 However, after completing the rising wedge, we expect it to retest the February low at the mid-$40,000 level.

edged higher ahead of Wednesday’s inventory as bulls bank on strong US demand. 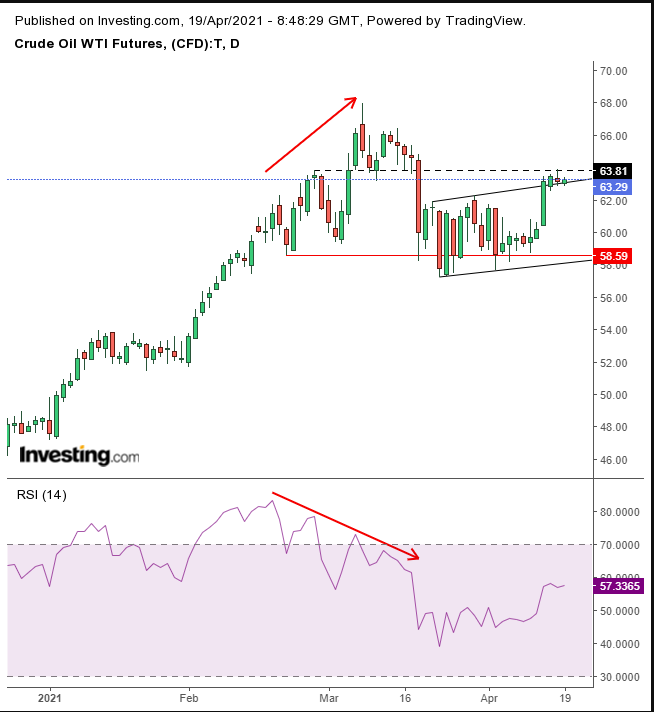 Technically, the price was stuck for the fourth day slightly atop a range, still below the left shoulder of a potential H&S top. The RSI provided a negative divergence.