Market sentiment has shifted back into positive territory. Traders once again think that there will be a strong economic recovery as countries emerge from coronavirus lockdowns and are no longer concerned about increasing inflation. Global equities have risen for a fourth straight month as ample liquidity supports risk taking. In pre-US trading on Tuesday, , , and futures were all in the green.

The often daily-whipsaw between inflation fears and recovery optimism has given us whiplash. Today’s market optimism is particularly interesting, given that commodities—the culprits of inflation fears—are rising, but that seems to be unable to sour the mood.

In Europe, the Index jumped 0.8% right out of the gate to register a new all-time high, led by cyclicals, on news the EU is set to lift travel restrictions by launching a digital vaccine passport to allow for a “safe and relaxing summer.”

Given that economic strength is measured relatively, the biggest contrast will be the results following an economic shutdown. Not only is growth returning from zero, but there is pent up consumer demand and they have additional savings to facilitate increased consumption. Add to that that the emotional relief which could cause people to celebrate and arguably lead to additional overspending could powerfully boost economic growth.

The surged 0.9%, despite the touching a three-year high. All four US futures were in the green, after the US market was closed yesterday for Memorial Day. US markets delivered only modest, nervous results during the past month.

This morning, Asian benchmarks were mixed, while MSCI’s broadest of Asia-Pacific shares outside Japan hit a monthly high, reaching a 7% gain YTD.

South Korea’s added 0.6% after data revealed the country’s sharpest expansion in 32 years in May. On the other hand, Japan’s lowered 0.2% after data indicated companies reduced investments on plant and equipment for the fourth quarter in a row.

China’s grew just 0.25% after the country’s that factory activity slowed in May as raw material costs grew at their fastest rate in over a decade.

Yields on the Treasury note rose above 1.62%, the highest in a week-and-a-half. 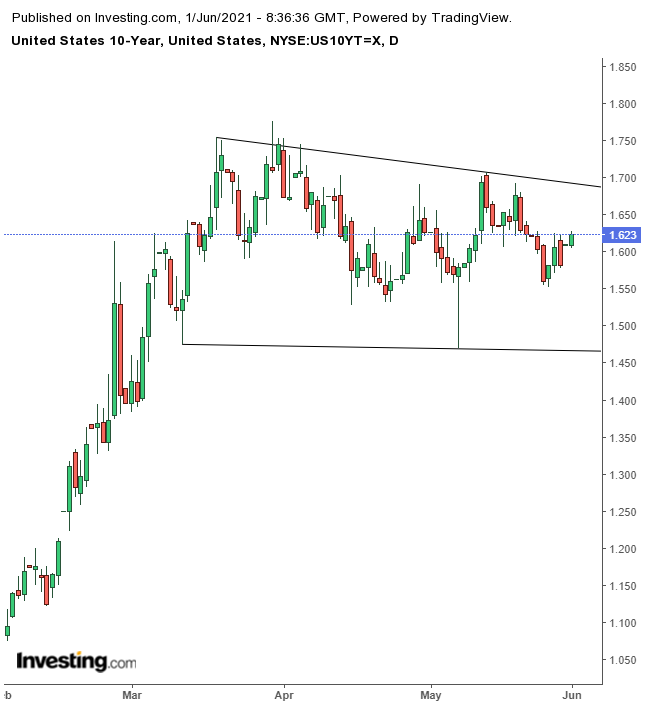 However, rates are still within a range. Only a breakout will determine which way stocks are likely to go, provided the positive correlation between stocks and yields continues.

The rebounded from another low. 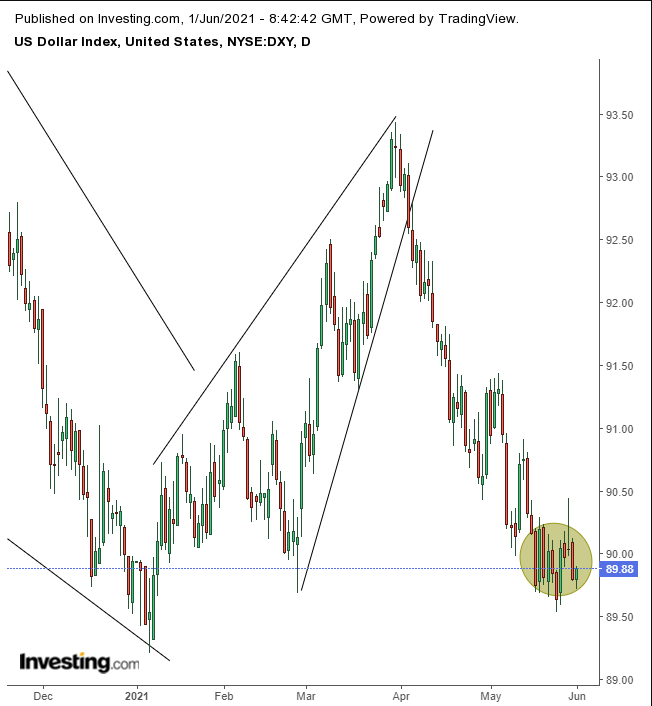 The dollar is struggling between the implied demand of the massive falling wedge since the 2020 peak and the presumed supply following the smaller but more recent rising wedge. The greenback is tightly congested at the base of the smaller wedge. A new low would likely send the dollar much further lower, probably quickly, while an upward break may catapults the dollar toward its March 2020 high.

gave up the highest level since Jan. 7, as the dollar turned around. 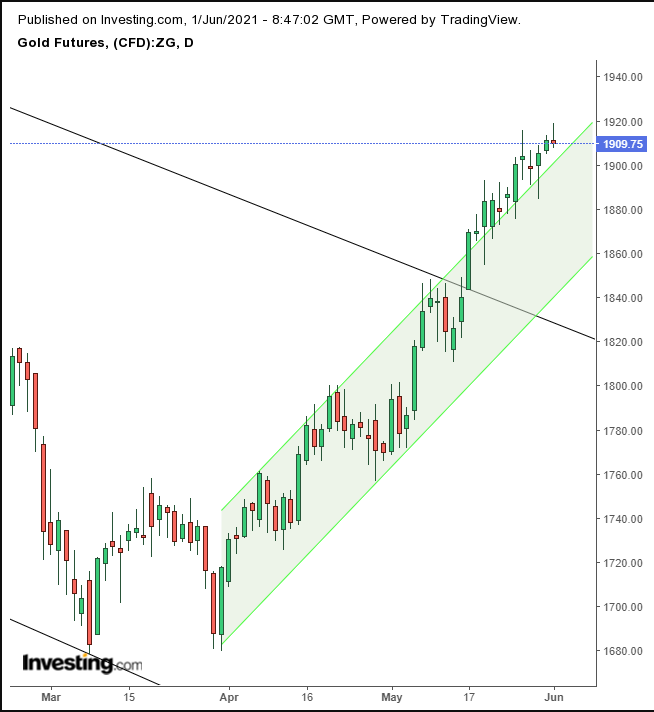 Gold has been struggling to advance but advancing, nonetheless, and is trading in the $1,900 range. It has been trading above its rising channel, but until it breaks its range, we would wait for a pullback to retest the channel top and maybe even the top of the broken falling channel since the 2020 record high.

We are waiting for traders to make up their minds. 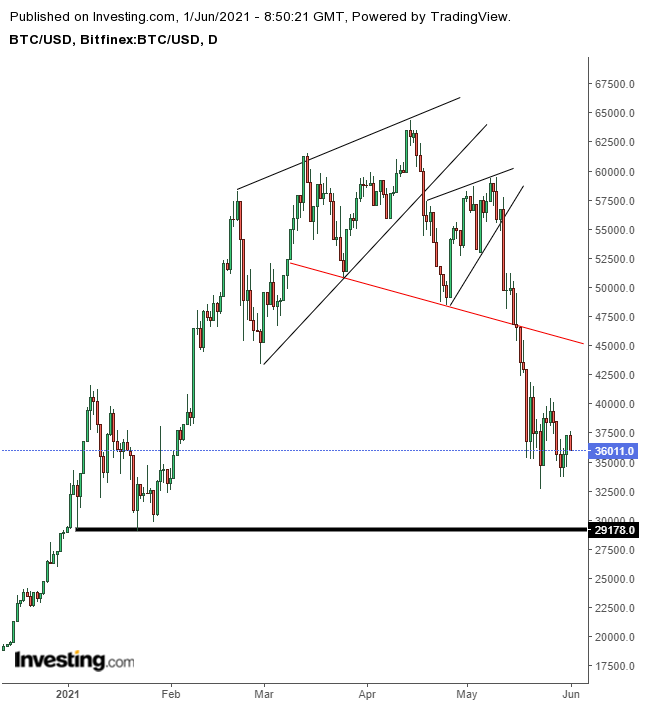 After losing over 50% of its value and having achieved its H&S top’s implied target, we posted a bullish call on the cryptocurrency. However, if the digital coin falls below $29,000, we will reverse our position. 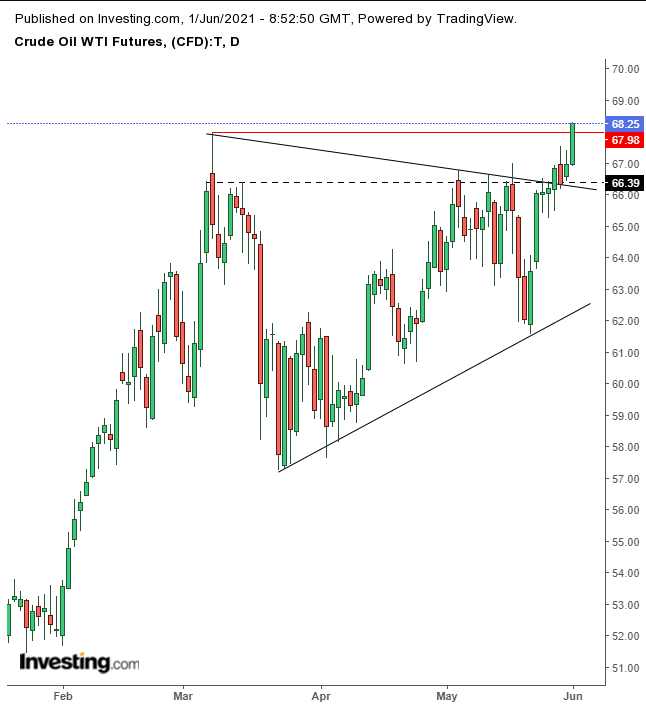 The price completed either a symmetrical or ascending triangle, both bullish in this chart. It is currently testing the intraday high of Mar. 8. As things stand, oil is now at its highest level since October 2018.