After a week in which both growth and value stocks advanced, the reflation trade is back in charge, as investors bet on robust growth backed by Fed support ahead of a busy week of earnings reports. Contracts on the are trading higher on Monday, while ,  and futures are struggling.

After falling for two-consecutive days, gold has been wavering.

Currently, the biggest market catalyst is the ongoing earnings season. The Fed has been continuing to convince investors it has no intention of changing its policy, making data of slightly less importance at this point. Nevertheless, old habits die hard, meaning we still expect economic releases will have at least a short term impact.

US is forecast to rise 6.1% YoY for the first quarter, up from 4.3% QoQ. Analysts also expect more , rising and strong , due to double the usual savings rate among Americans thanks to government stimulus checks and a prolonged lockdown.

Yields, including on the Treasury climbed for the second day, as investors unloaded haven sovereign bonds, pushing the dollar down further, while boosting —a barometer for economic growth due to its widespread industrial use—to a decade-high. However, after the red metal reached the target of the preceding symmetrical triangle, we’d recommend waiting for a dip, before considering a long position in the base metal. 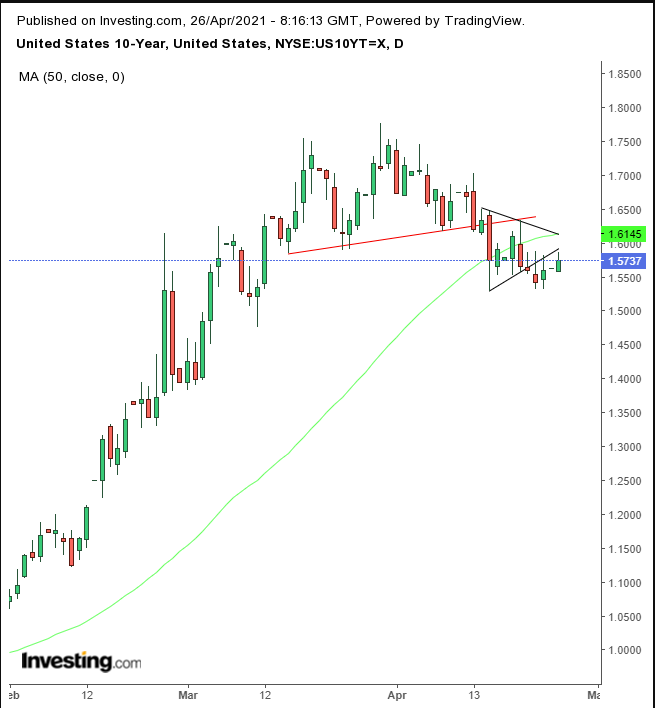 Rates rebounded, but we consider this a corrective move within a downtrend, since the note completed a small top and a bearish pennant.

Falling yields acted as a drag on the , pushing the currency lower after it completed a rising wedge, nearing the bearish pattern’s target. 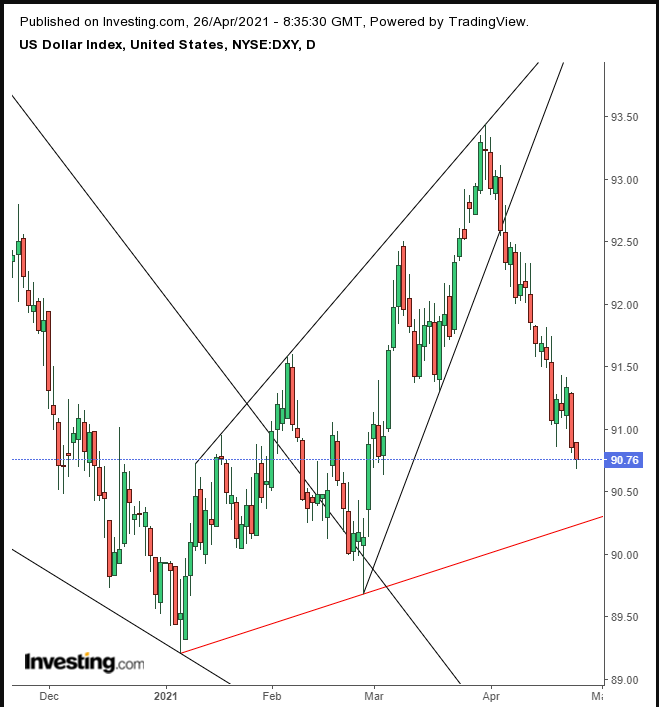 But first, the greenback will test the uptrend line since the Jan. 9 low, before it completed a rising wedge since the March peak, as two opposing forces struggle to dominate the global reserve currency.

struggled to rebound after a two-day slide, as the precious metal is squeezed between the short-term demand that completed a small double-bottom in a corrective move, and the long-term supply within a falling channel since the March high. Ahead of the FOMC on Wednesday, gold is expected to drift. 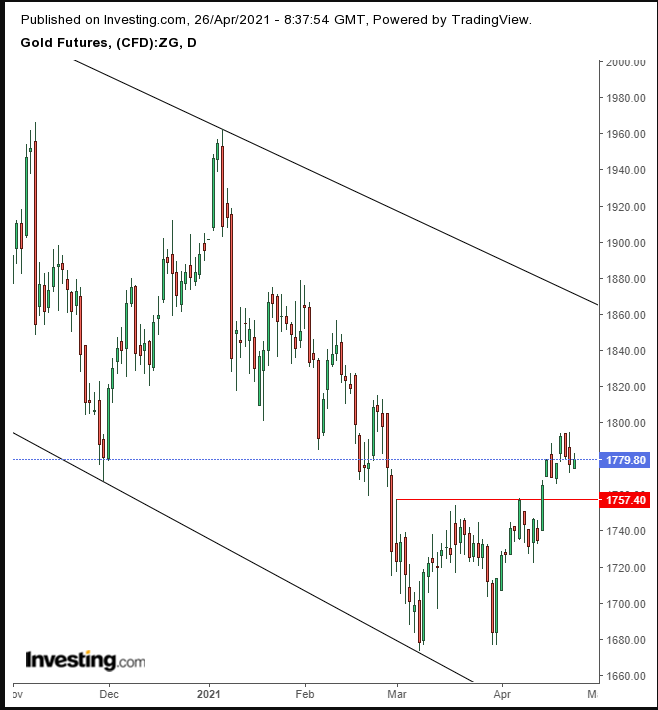 The chart illustrates how the supply-demand balance is being sucked into the vortex of the previous major low in November 2020.

surged over 8% after reaching its lowest level since early March, wiping out 3.5 days of losses. 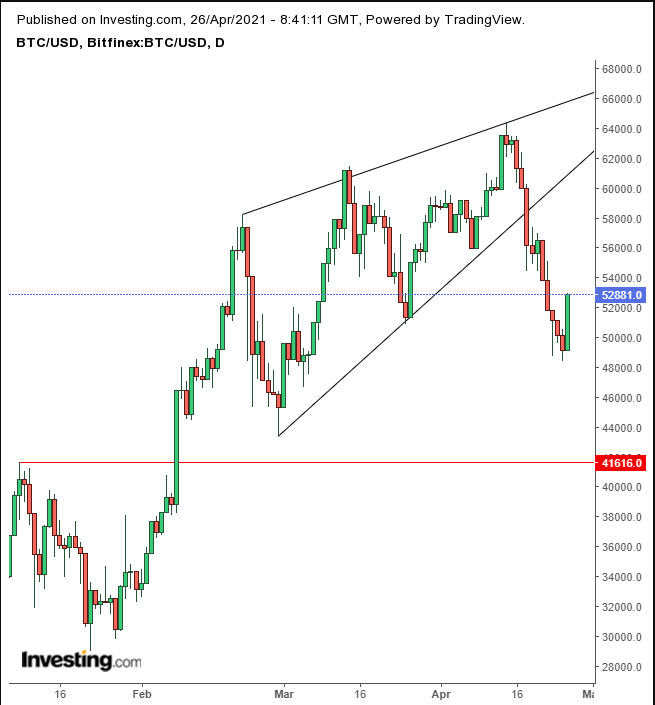 However, we consider this just a return move to a bearish wedge and would feel more comfortable buying the cryptocurrency nearer to the $40,000 mark.

dropped after India saw a million new COVID-19 cases in three days, worsening the outlook for demand for oil. The trading pattern may be developing a descending triangle, bearish and a signal for a top.

While European stocks struggled to push higher, the UK economy is expected to expand at the fastest pace since WWII, receiving a leg up due to its successful coronavirus vaccine program compared to the slow roll-out across the rest of Europe. Also, British companies were said to adapt better to social restrictions, causing consumer spending to increase despite a lockdown, which is beginning to ease.

UK is forecast to grow by 6.8% in 2021, well above the previously expected 5% expansion estimated in January. If this prediction proves true, it will mark the fastest yearly growth in national income since 1941. It might be noteworthy though that the long-term pattern has the potentially dramatically weakening versus the euro. 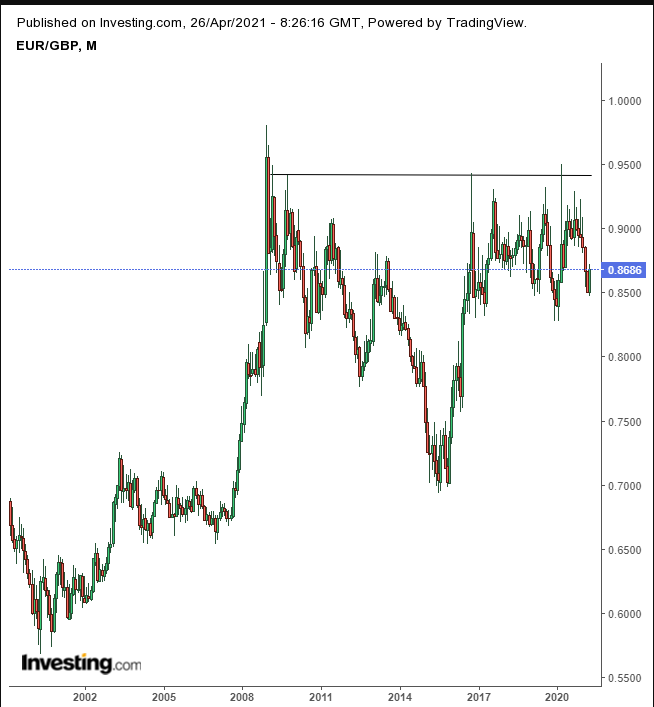 This potential slide will happen If EUR/GBP completes a massive H&S continuation pattern since 2009.