The global stock rebound seen in Friday’s US session fizzled this morning as trade war fears returned to the spotlight. European shares, which first attempted to climb, have now followed the global opening lower.

US futures are set to deepen losses after their most significant weekly drop since March, with down almost half-percent at time of writing and posting losses of almost one percentage point.

The is down about 0.2 percent, for a third straight day of losses totaling 3.75 percent and 6.5 percent for six sessions out of seven. The pan-European benchmark hit the lowest level since December 2016, weighed down by industrial goods makers and travel companies. 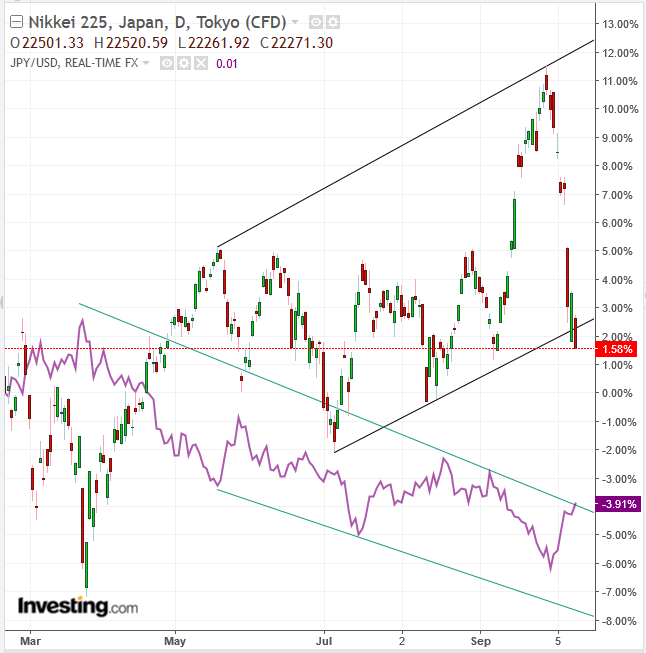 Earlier, during the Asian session, a stronger weighed on the , which closed 1.87 percent in the red, and was the region’s underperformer. The USD/JPY pair has been consolidating for the third session, above the 50 DMA, near the bottom of a rising channel since late May. The negative correlation between shares of companies reliant on exports and the value of the Japanese currency which determines their competitiveness in the global market is visible on the chart above. Should the yen resume within its falling channel, the Nikkei may resume within its rising channel.

China’s was the second-worst regional performer, shedding 1.49 percent of value, followed by Hong Kong’s , which slid 1.38 percent lower and hit the lowest level since November 2014.

On Friday, US equities posted their best performance in six months as traders bought into a dip, taking advantage of the deepest technology shares selloff since March. While early gains were quickly reversed, a second rally successfully pushed prices higher after JPMorgan said that 70 percent of the computer-driven trading strategies that had prompted the selling were played out.

The decline was the result of traders unwinding options positions related to changes in levels, as investors recalibrated their portfolios. The higher close, in the session’s final hour, was accompanied by a 30-percent surge in volume.

The fundamental and geopolitical backdrop for Friday’s late session rally were:

Despite Friday’s bullish performance, which saw tech stocks lead the climb and push the 2.29 percent higher, the tech-heavy index, the and the all suffered their worst weekly losses since March. The market is debating whether this is a correction within an ongoing bull market, a buying dip, or the first stage of a broader selloff, potentially leading into a bear market. Earnings results may move the needle on the debate, from a fundamentals point of view. 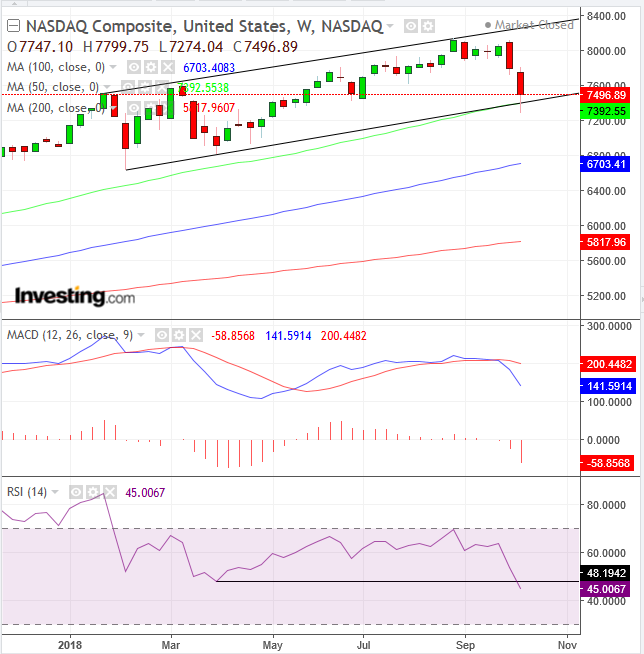 Overall, the three US majors remain in uptrends, unlike the . This is exemplified on the NASDAQ chart by the dual support provided by the uptrend line since early February and the 50 WMA and 200 DMA. However, caution should be applied, as the price is hanging onto the 200 DMA by a threat and both the weekly RSI and MACD provided sell signals.

Today’s prevailing risk-off mood—which follows a week riddled with bumps in the road, including warnings from the International Monetary Fund of further market instability—has driven investors into safe haven assets. The yield on Treasurys edged lower, though it was gaining ground during the late European morning. 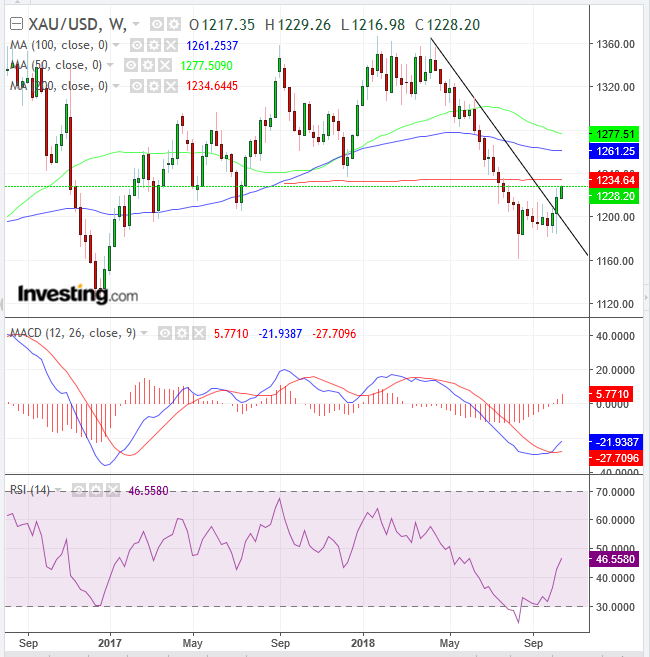 has been making a comeback, having crossed above its downtrend line since April. The weekly RSI has rebounded from an oversold condition and the weekly MACD’s shorter MA crossed above its longer MA for the first time since January. Note that it is approaching the 200 MWA, and on the daily chart (not shown) it stopped dead beneath the 100 DMA. 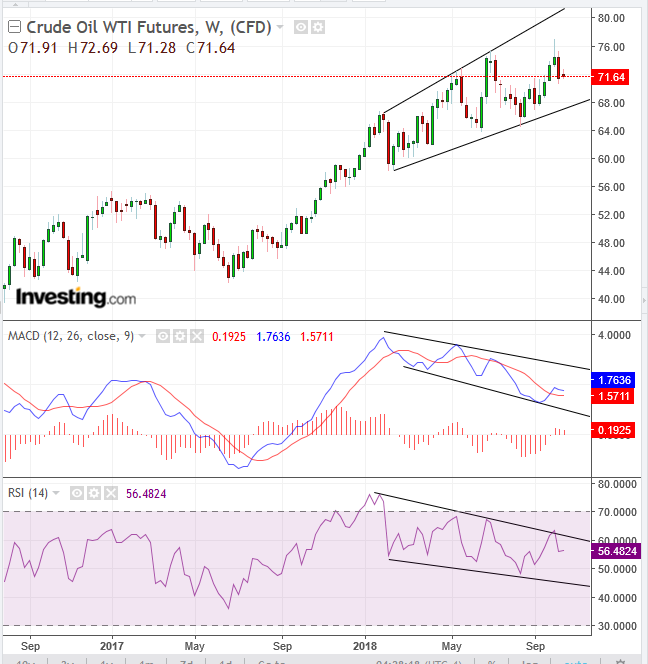 advanced on mounting tensions between the US and Saudi Arabia over the disappearance of a prominent journalist. Spanish oil company Cepsa has shelved an IPO because of market conditions, its Abu Dhabi owner announced before the open. Technically, we can note the negative divergences provided by the MACD and RSI.

In FX news, the slipped after a surprise Sunday visit to Brussels by UK Brexit Secretary Dominic Raab failed to break the negotiation deadlock between the two blocs. Officials on both sides played down the chances of an imminent agreement and denied a Politico report that a deal had been sealed.