Futures on the , and pointed to a firmer US open this morning and European shares edged higher, shaking off this morning’s mixed Asian session as investors look to potentially dramatic developments between the world’s two largest economies, currently holding trade talks in Beijing.

The was led higher by technology companies and banks, despite a surprise miss for , which raises worries about a key sector for the biggest economy in the euro area. The gauge fell 1.9 percent in November from October, falling short of the 3.0 percent expectation. 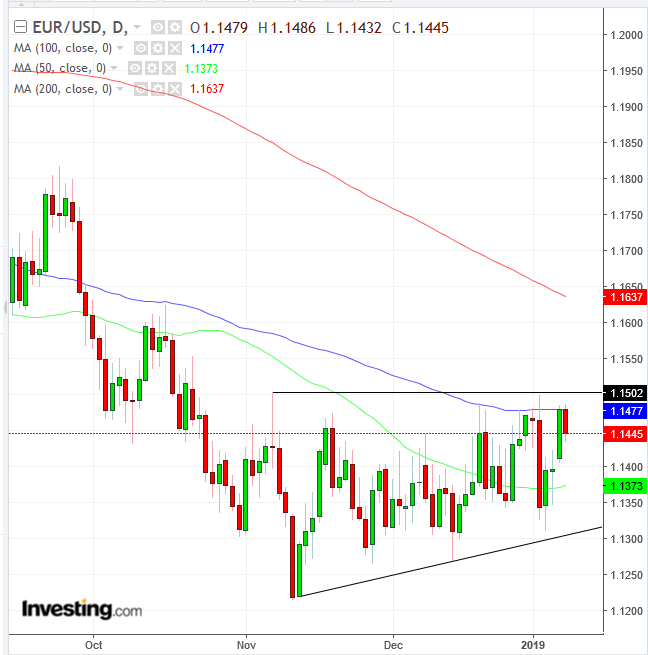 Stocks in the region likely received a boost from a falling , which was dragged lower by the disappointing data from Germany. The weaker single currency makes the continent’s exports more competitive in a global market mired by trade tensions. Technically, the euro is showing signs of bottoming out as it forms an ascending triangle. Meanwhile, the price found resistance by the pattern top and the 100 DMA. 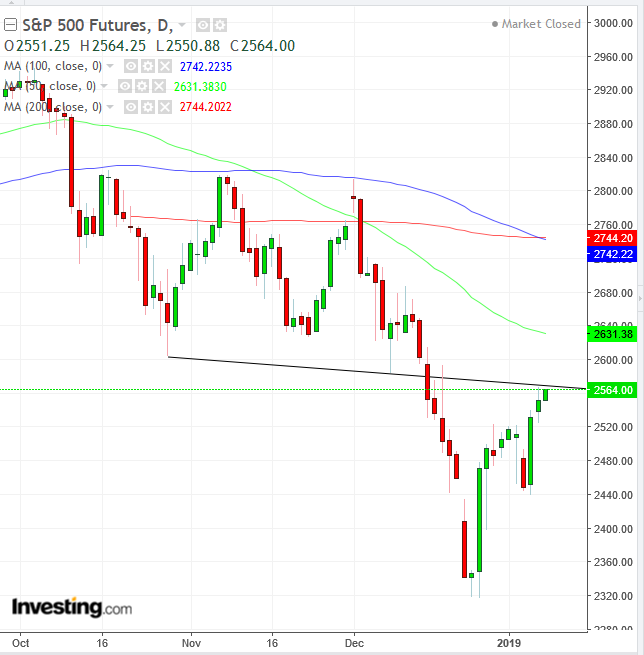 Futures contracts on all four US majors bounced at the European open, though they failed to climb higher than yesterday’s intraday highs. Also, they are all pushing against previous resistance levels that turned to support. S&P 500 contracts are retesting the consolidation bottom of October 29 through December 19, which seemed to have suppressed yesterday’s closing price. As well, the 100 DMA just crossed below the 200 DMA, suggesting prices are falling. It may create a snowball effect, in which technical traders increase supply.

Earlier, Asian indices partly gave up gains that had been triggered by optimism over a US-China trade agreement and a slowdown in the Fed’s pace of tightening. A strengthening dollar weighed on the region, swaying investment away from emerging markets.

Yesterday, stocks in the US inched higher for a second day, as US-China trade talks infused hopes that one of the most prominent market headwinds would be resolved, compounded by a robust and a dovish shift by the Fed. The climbed 0.7 percent, with the sector (+2.26%) clearly leading the advance. shares, buoyed by the sixth straight day of gains in , was still quite far behind, up 1.49 percent. (-0.68%) lagged alongside (-0.14%).

The climbed 0.42 percent. The ticked 1.26 percent higher and, ironically, the jumped 1.82 percent, outperforming its peers.

We pointed out on Sunday that small caps have been outperforming, which is unusual considering that US and China finally appear to be on the right track to solve their tariff dispute. Apparently, the preceding rout made small caps relatively better valued. 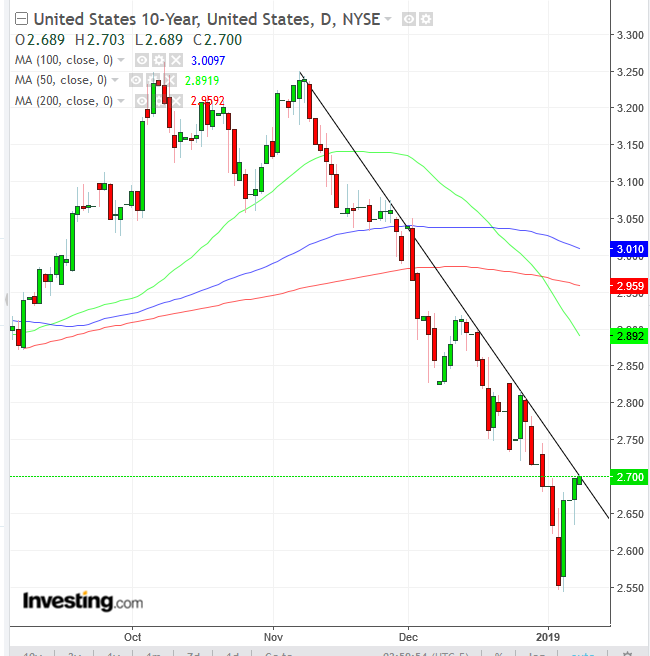 The yield on Treasurys rebounded, now testing yesterday’s highs, which found resistance by the downtrend line since November 17, when yields reached 3.250 percent—the highest since May 2011. Also, last week the 50 DMA crossed below the 200 DMA, triggering the much-feared Death Cross. 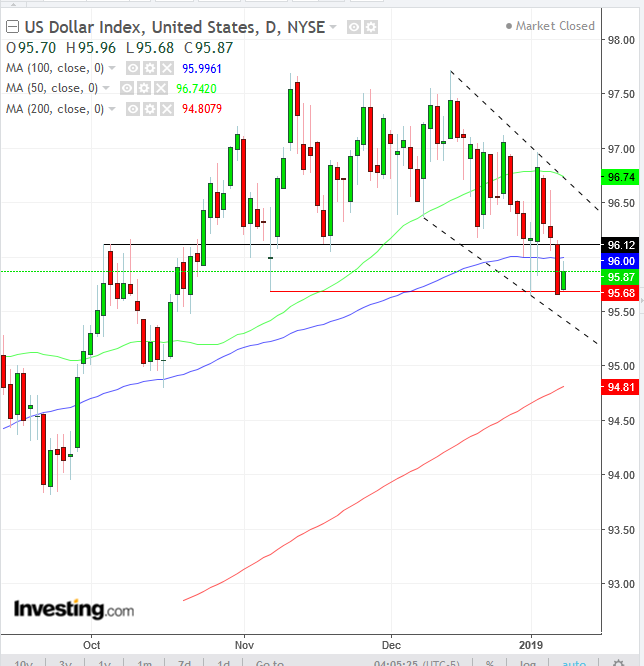 The bounced back from yesterday’s 0.54 percent drop. There are two fundamental drivers that keep pressuring the greenback:

Technically, the USD rebounded today after finding support by the November 7 lows. Meanwhile, the primary support/resistance line since October 3 has been breached with a close 0.5 percent below—at the bottom of the session. Also, the dollar may find the support of the bottom of a descending channel since mid-December. The next major support is the 95.00 psychological area, supported by the mid-October lows and the 200 DMA. 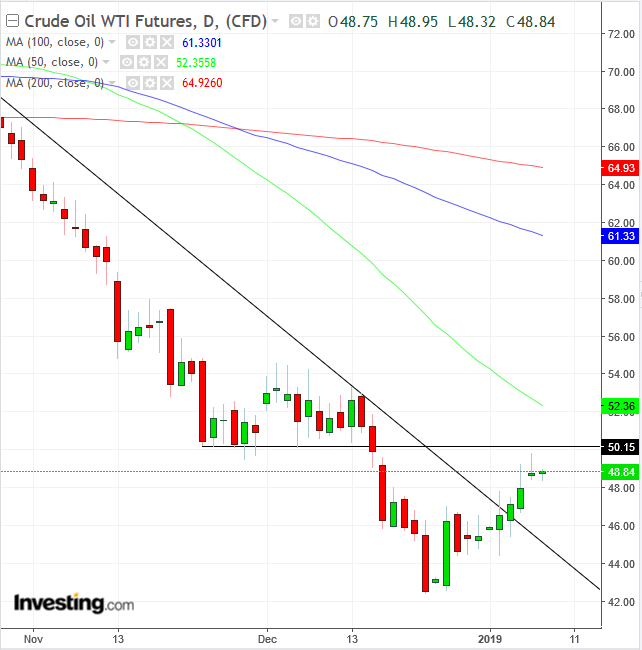 WTI prices are higher for the seventh straight session, on the Saudi plan to reduce exports by up to 800,000 barrels a day from November levels—despite warnings from US President Donald Trump. Technically, while the price ascended above the downtrend line since October 3 after nearing the $77 level, the highest since late 2014, yesterday’s candle produced a bearish shooting star, as it reached the November-December support-turned-resistance at the psychological $50 mark.

Looking at the overall picture for markets, fundamentally investors now face a dichotomy: they have to decide whether they want to rely on a solid US employment report and a potentially more dovish Fed, or remain cautious based on ongoing trade uncertainty, Brexit headwinds and a global economic slowdown, in the late phase of a business cycle. Adding to these risks is the fact that US lawmakers have been unable to reach an agreement on budget, causing the partial federal government shutdown to enter its third week.

Technically, we are bearish in the medium term, with the next big test being with the 200-week MA, which supported last month’s lows, on top of the long-term uptrend line since the 2009 bottom. Should those levels break, we will turn bearish in the long-term as well, expecting a full-fledged bear market.