The yield on 10-year Treasurys pared losses this morning, suggesting the risk-off momentum was easing and helping futures on the , Dow and NASDAQ 100climb into green territory. Initially, European shares gained ground for a third day, as benchmark yields in the region were also on the rise. However, by late European morning price moves reversed once again, with yields resuming their slide and both the and U.S. futures slipping into the red. 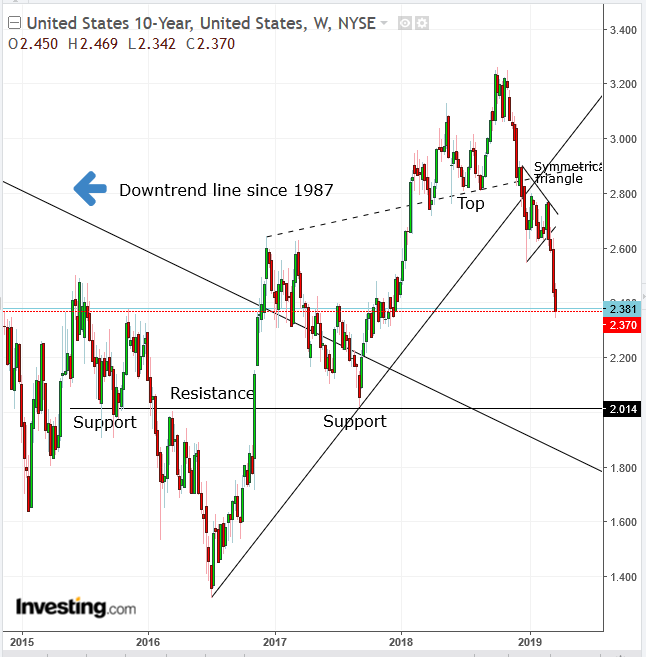 Technically, Treasury yields found support at levels that were beset with congestion throughout 2017. The next major support is the 2.00 levels. That’s a long way down, from 2.38, but it doesn’t mean the decline will be a straight line, especially considering the aforementioned congestion, suggesting considerable interest on both sides of the supply-demand balance at these levels.

In the earlier Asian session, stocks sold off tracking tumbling yields. Australia’s (+0.65%) bucked the trend, with Consumer Discretionary, Metals & Mining and Resources helping it to rebound from an initial slide alongside yields.

Japan’s (-1.61%) underperformed, with the safe-haven yen heading to its highest price since early February—in line with a plunge in 10-year Japanese yields to the lowest level since mid 2016. The strengthening yen increased headwinds to the country’s export-sensitive economy, amid a precarious global trade situation. 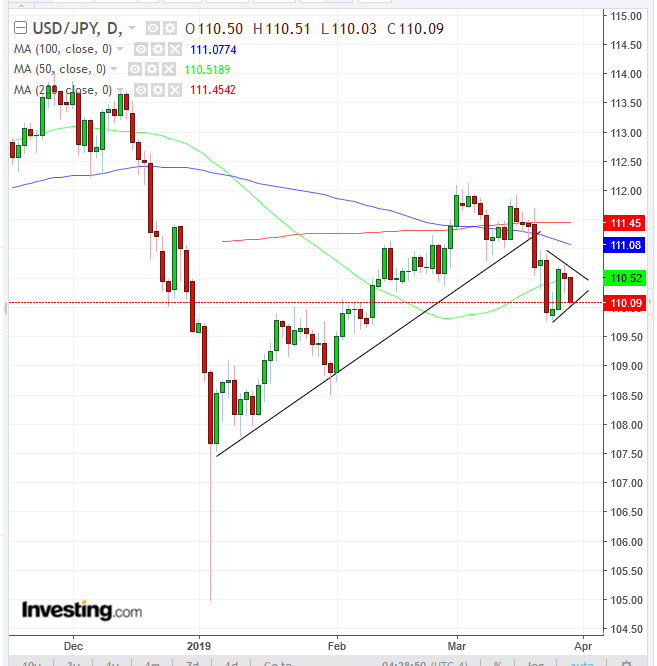 The pair is now developing a pennant, bearish after it fell below the uptrend line since the beginning of the year, foretold by the death cross in late January.

Meanwhile, pound sterling edged lower after the U.K. Parliament voted down eight different options on a new Brexit strategy, while Prime Minister Theresa May made a last-ditch attempt to win support from Tory MPs for her proposal by pledging to resign in exchange. 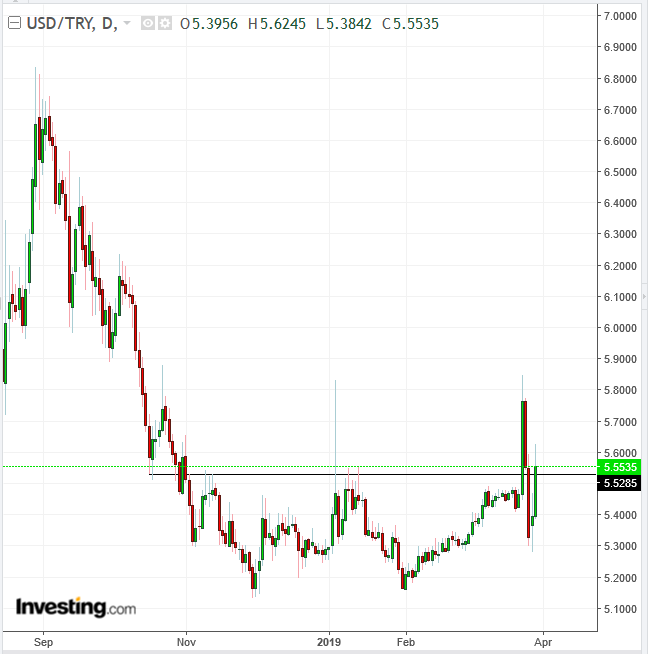 The Turkish lira plunged 5% against the dollar on Thursday, tumbling for a second day despite efforts by President Recep Tayyip Erdogan to avert market chaos ahead of a crucial round of local elections. Moves by the country’s central bank to withhold lira liquidity spooked investors further, boosting selling. Technically, the USD/TRY pair may be bottoming out.

In yesterday’s U.S. session, a persistent yield slump kept roiling financial markets, as investors were caught in a vicious cycle of rotating out of equities into Treasurys, exacerbating the very signal that originally unnerved them. 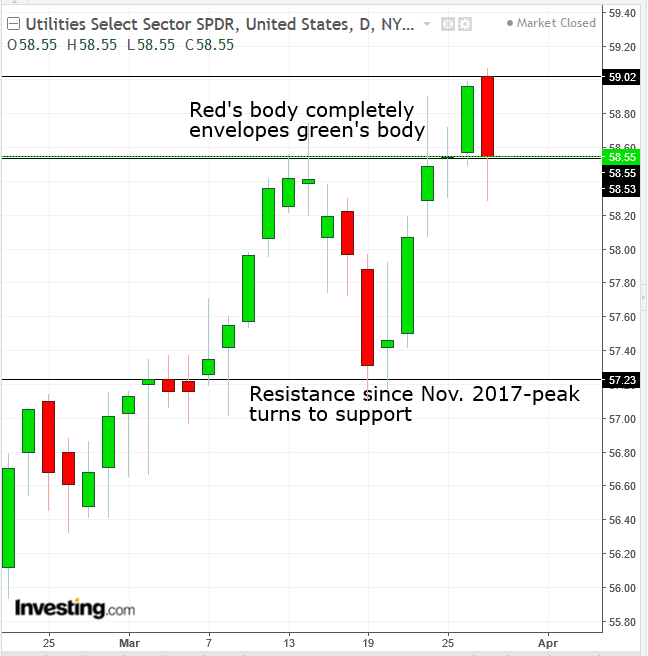 After opening higher, the sub-index closed below Tuesday’s opening price, forming a rare bearish engulfing pattern, for the first time this year and the second time since May last year. Here, the second red candle is both higher and lower than the initially bullish green candle. The extent of the price reversal may suggest more than mere profit-taking. However, volume was not exceptional, curbing the pattern’s pessimistic outlook.

Overall, Industrials (+0.11%) was the only SPX sector closing in the green. 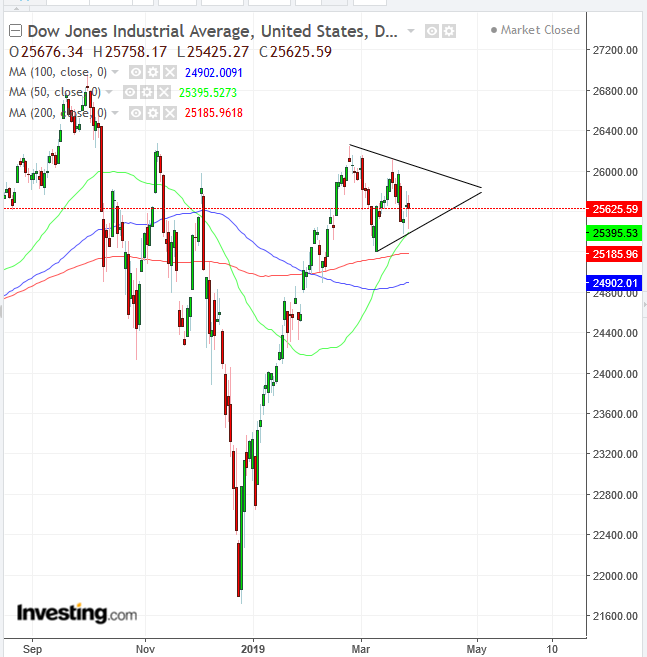 The retreated 0.13% off Tuesday’s rally. From a technical standpoint, the industrial index is in the most favorable position among U.S. majors—though we are aware that the following analysis bucks the broader bearish stance. The Dow is forming a symmetrical triangle, suggesting a bullish bias after the 20% post-Christmas rally, as it develops the pattern on top of the major moving averages, after a golden cross. An upside breakout would suggest the index will take on the September peak. On one hand, for the bullish signal a decisive upside breakout is required above 26,000. On the other, conflicting signals may serve to project the indecision typical of major market turning point.

In commodities, gold was heading lower today, due to the strengthening dollar.

Oil dropped for a second day after a surprise increase in U.S. inventories. Meanwhile, three fundamental headwinds threat to impact global supply in the near future.