Global stocks resumed yesterday’s pattern this morning, with European shares and futures on the , Dow and NASDAQ 100 shrugging off some Asian declines, as investors waded through trade talks expectations, Fed risk and corporate earnings. 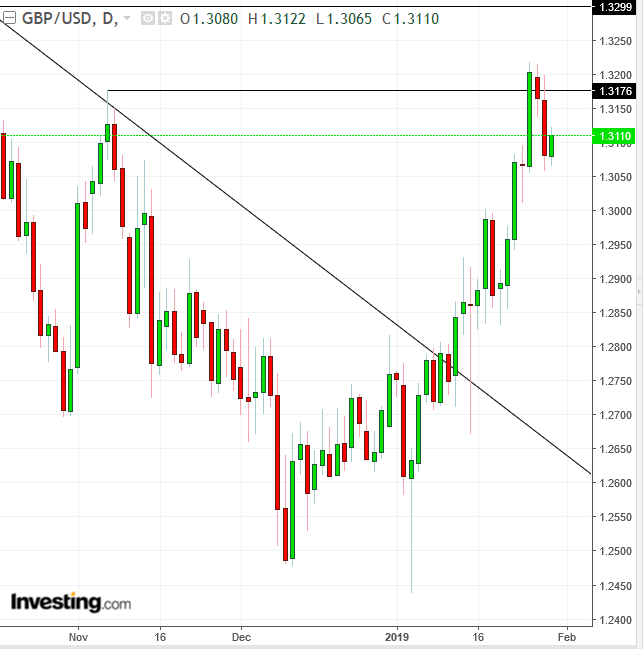 Meanwhile, the pound rebounded from a two-day selloff and U.K. shares on the edged higher for a second day after Prime Minister Theresa May won lawmakers’ backing to re-open Brexit negotiations with the EU. Sterling is still struggling to overcome the 1.3200-mark, the highest level since November—with some expecting further downward pressure from the arduous task May is now facing.

The STOXX Europe 600 bounced back from a weak opening, when it was weighed down by choppy performance among regional benchmarks.

Earlier, during a mixed Asian session, Japan’s (-0.52 percent) and China’s (-0.72 percent) were more decidedly downbeat. On the other side of the spectrum, South Korea’s gained 1.05, boosted by foreign investors rushing to buy into Apple (NASDAQ:) (NASDAQ:AAPL)’s earnings success. 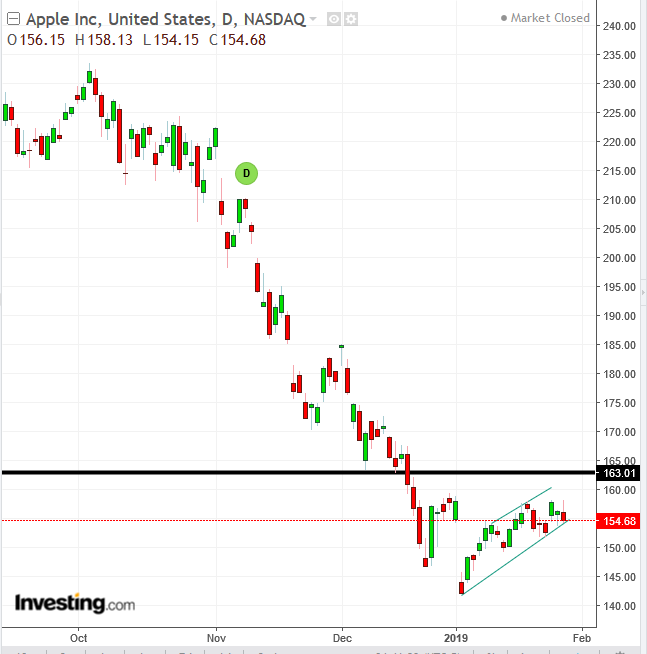 The tech giant’s stock was up $8.32 to $154.68, or 5.38 percent (black line) in the premarket, after first quarter figures and forward guidance came in better than the market had feared following the company’s shock warning earlier this month. On January 2, Apple had in fact lowered guidance for the first time in 15 years on weakening Chinese demand and fewer iPhone upgrades.

On Tuesday, U.S. indices were dragged lower by technology stocks in an earnings-focused day, as investors were bracing for Apple’s release.

The S&P 500 edged 0.15 percent lower, falling for a second day within a near-two-week consolidation, as bulls and bears fought below the 2,700 line-in-the-sand between the longer-term downtrend since the September record-peak and the post-Christmas rally.

Communication Services (-1.18 percent) and Technology (-1.08 percent) were the main culprit of the index’s slide, with Facebook (NASDAQ:) (NASDAQ:FB), Twitter (NYSE:TWTR) and chipmakers all losing ground. 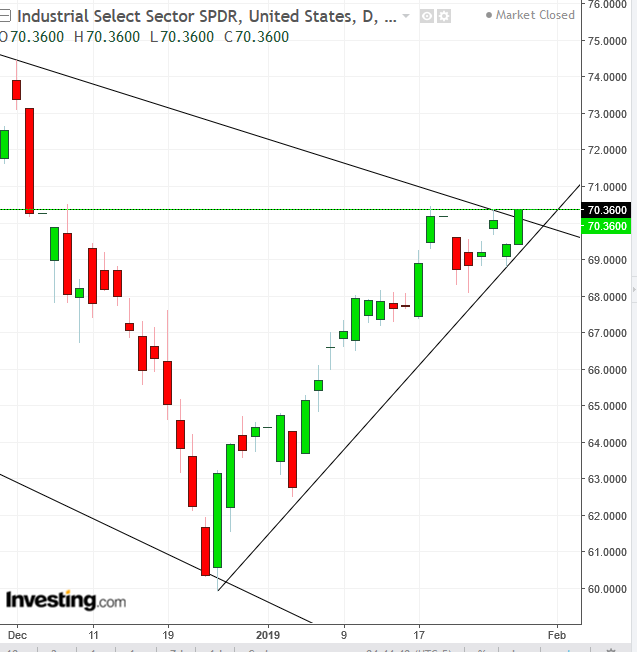 The broader market dropped lower, pressured by persistent trade headwinds ahead of paramount talks between U.S. and China’s top officials, kicking off in Washington today. However, the most sensitive sectors to the outcome of the negotiations—such as industrials—rallied. Meanwhile, an appearance at the British Columbia supreme court by Huawei’s (SZ:002502) CFO Meng Wanzhou on Tuesday—a day after the U.S. announced criminal charges against the Chinese telecoms giant—added to the general trepidation.

The (+0.21 percent) was the only major U.S. index closing in the green, reflecting industrials stocks’ outperformance.

The tech-heavy ranked as the day’s laggard, slipping 0.81 percent, while the closed 0.02 percent into negative territory.

Overall, the strong post-Christmas equity rally came to a full stop ahead of key technical resistance (as described in the S&P 500 section above) amid a barrage of potential macro and fundamental catalysts, including trade jitters, Brexit, the Venezuelan crisis, a global growth slowdown, the threat of ongoing U.S. government shutdown and—last but not the least— earnings risk, with Facebook and Microsoft (NASDAQ:)(NASDAQ:MSFT) scheduled to report today.

However, we have considered for a long time the Fed‘s monetary policy to be the biggest market mover, especially in the short term. Central bankers’ accommodative stance was in fact responsible for the longest U.S. bull market in history. Now, it seems that policymakers synchronized with market expectations, after pointedly stating they wouldn’t. If investors were to perceive the slightest hawkish tone from them, they could move in droves into a defensive posture, and could in turn push down the back end of the Treasury yield curve, toward an inversion.