European shares and futures on the , and flashed green across the board, extending the rally seen yesterday on Wall Street, as investors found some steady footing ahead of a crucial speech by Federal Chair .

The rallied, buoyed by miners and energy producers, as traders took their cues from a bullish Asian session where regional benchmarks such as Japan’s outperformed (+1.02%)—though the Japanese benchmark closed well below its highs, paring 2.29 percent from its intraday high. Australia’s (-0.06 percent) was the only regional index to close in negative territory, dragged lower by materials stocks.

Yesterday, US equities extended a rebound on hopes of easing trade tensions between the world’s two largest economies. The natural exception were (-0.80%), whose luster fades each time traders see a light at the end of the US-China trade-dispute tunnel. Conversely, the outperformed (+0.44 percent), suggesting optimism on a trade resolution was the main market driver during the session.

Equities did in fact reverse losses after the White House’s chief economic adviser Larry Kudlow said the meeting between China’s leader Xi Jinping and US President Donald Trump is an opportunity to “turn the page” on trade relations. Ironically, Kudlow’s reassurance did nothing for trade-dispute proxy sector (-1.22%), the clear underperformer. (-0.17%), the other most affected sector during trade jitters, also lagged behind. We found no explanation for this anomaly.

The advanced 0.33 percent, sealing two-day gains of 1.87%. The second worst performing sector after Materials was —whose fate is tied with oil’s woes—which still managed to close more than a full percentage point above the main laggard (-0.28%). (+1.04%) fared as the day’s winner, advancing for a third straight day as CVS Health (NYSE:)’s and Aetna (NYSE:) shares continued to surge after winning state approval for their $69 billion merger on Monday. 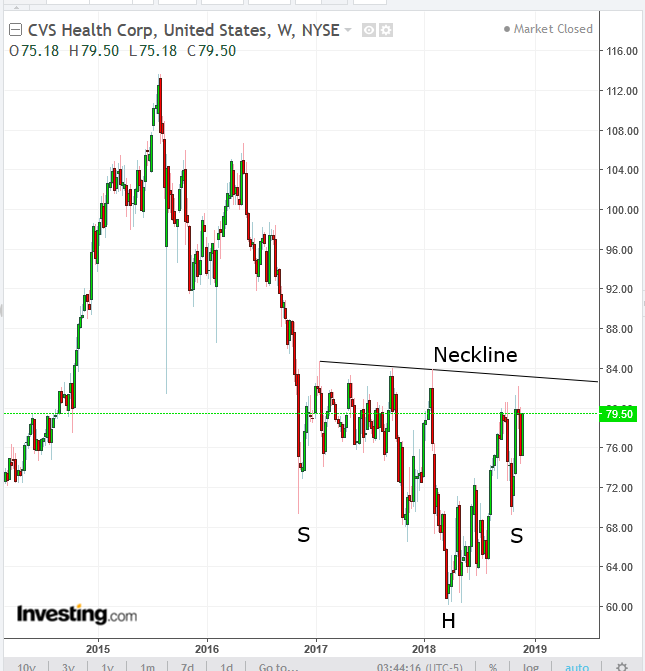 CVS gained 2.13% on Tuesday, bringing its three-day gains to 5.87%. Technically, the trading pattern is developing a potential massive H&S bottom since November 2016. 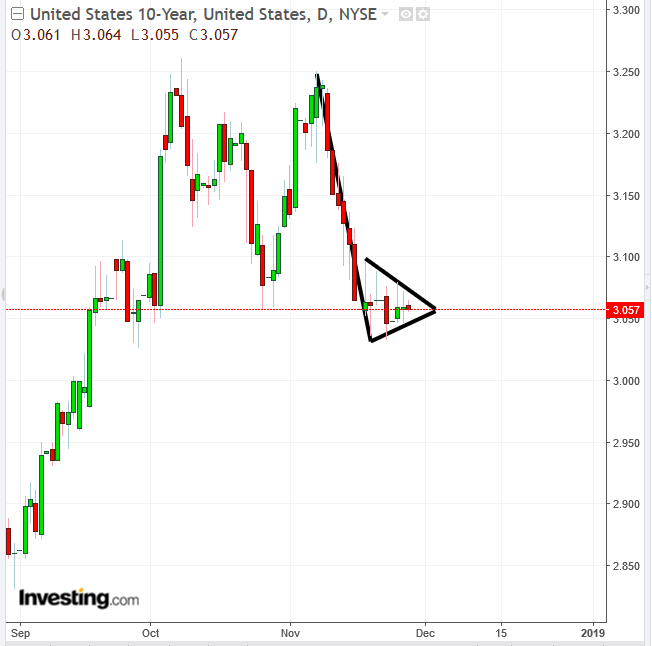 Meanwhile, the yield on extended a consolidation after Fed Vice Chairman supported gradual ahead of Powell’s speech today. 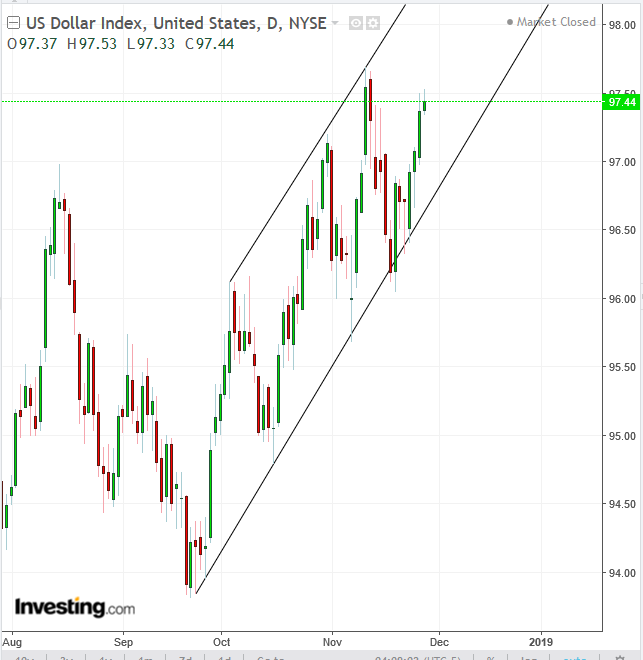 The initially edged higher but later wavered around neutral levels. Technically, the greenback reached 0.6% below the November 12 close and 0.20 percent from the November 12 high. Any additional gains will extend the medium-term uptrend and take the USD to the highest levels since June 2017.

The was mildly positive amid new developments in the battle between UK Prime Minister Theresa May and Parliament, as May appeared to abandon her attempts to get her draft Bexit proposal voted without amendments. European bonds and the meandered.

climbed above $4,000 after plunging earlier in the week.

also rebounded to about $61 a barrel, though it later slipped into negative territory. Overall, the recent shifts in the oil market seem to have swayed the direction of the broader commodities spectrum this year.

Later today, Powell’s speech will be scrutinized for any clue, however subtle, on whether the pace of the Fed’s interest rate tightening will slow down to any extent. Recently, investors have reacted strongly to the continued removal of the central bank’s unprecedented accommodation, which was the main tailwind for the longest bull market on record. Clarida said risks to the US economy are “less skewed to the downside,” while St. Louis Fed President James Bullard was more cautious, telling Reuters that officials must monitor possible “cracks” in the American recovery and that growth is going to slow in 2019 and 2020.

We have repeatedly argued that interest rates are the main driver of long-lasting market moves, while the US-China trade story will be less impactful in the longer term. Nevertheless, trader focus will also be turning to the long-awaited meeting between Trump and Xi Jinping in Buenos Aires this week, with the outcome remaining highly uncertain after Trump’s recent mixed messages.