European stocks and futures on the and extended an advance this morning as robust corporate results and a dovish tilt by the prompted investors to increase risk.

Energy firms helped the climb for a third day after Shell (AS:) posted solid .

Meanwhile, Facebook’s (NASDAQ:) upbeat earnings and record profits drove NASDAQ futures higher. Fourth quarter revenue of $16.91 billion marked a year-over-year growth rate of 30.4 percent for the social media giant, while other key metrics confirmed an upward trend: daily active users reversed the earlier downtrend to grow in every geographic area, after the measure had dropped in Europe and plateaued in the U.S.. Average revenue per user, or ARPU, at $7.37 crushed analyst estimates, marking a 21 percent increase from the previous quarter and a 19 percent annual increase.

Earlier, during the Asian session, regional shares edged higher despite China’s contracting for the second consecutive month. While the reading confirmed a downward trend, investors may have focused on the fact that it also showed a slight improvement from the previous figures. Alternatively, they may have disregarded Chinese data altogether and focused on the Fed and Apple (NASDAQ:) tailwinds, as well as on hopes for a U.S.-China trade resolution.

In Wednesday’s U.S. session, shares opened higher on Apple’s , and extended their advance on by the Fed that it will maintain a wait-and-see approach on its tightening path. Chair said the central bank will be “patient” on future interest rate hikes and “flexible” on its path to reducing its balance sheet. Yields on Treasurys tumbled after the Fed’s as the outlook for interest rates shifted: a “patient” Fed suggests a slowdown in hikes, but a “flexible” Fed may even suggest rate cuts, suddenly making current yields more attractive for investors. 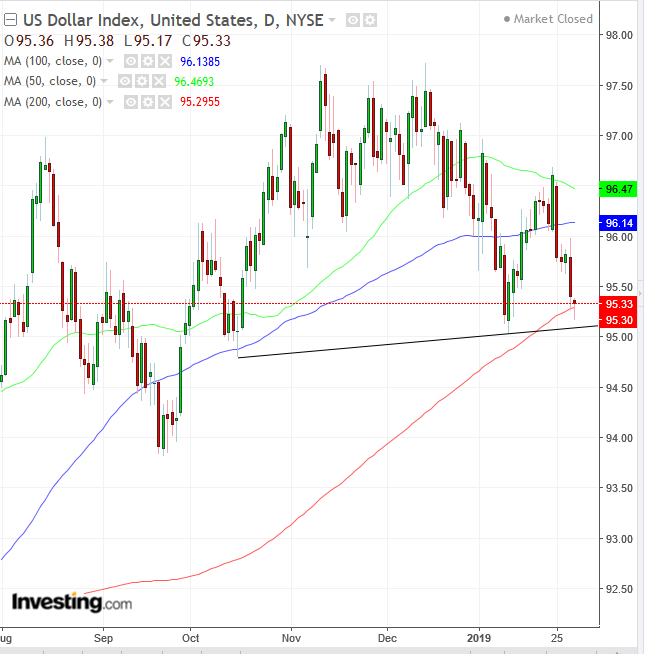 The also slipped lower after the FOMC press conference, though it found support above its trend line since October as well as its 200 DMA. Today, the USD was seen wavering around neutral levels after extending losses.

Back to equities, all major U.S. indices hit eight-week highs yesterday, with the the leaping 1.55 percent. All sectors climbed 0.77 percent or higher. (+3.11 percent) rebounded from the previous day’s dismal performance, turning into Wednesday’s outperformer. 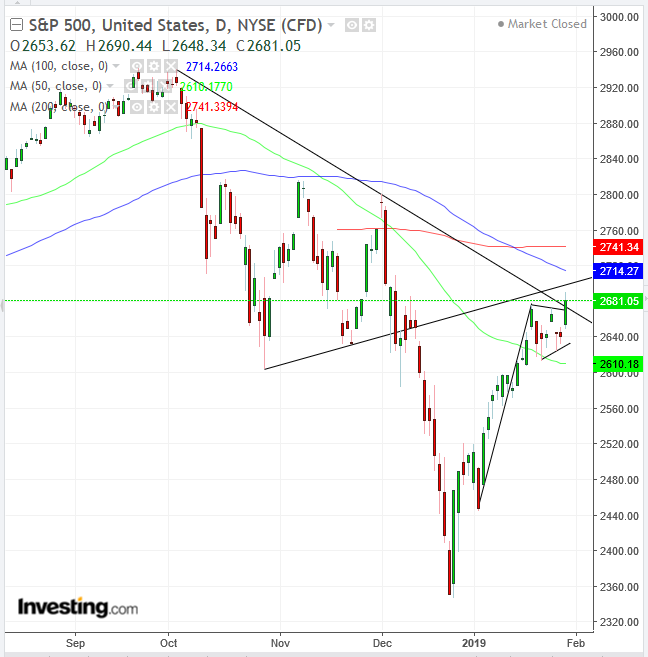 Technically, the SPX is caught in between conflicting forces. On one hand, it may have completed a bullish pennant. On the other, it is still below the top consolidation formed between October and December. The price closed yesterday’s session on the very downtrend line.

The gained 400 points, or 1.77 percent, pushed higher by Boeing (NYSE:), which despite ongoing trade uncertainty. The company exceeded $100 billion in annual revenue for the first time in its history, helped by a record delivery of 806 commercial aircrafts last year—a number it expects to surpass in 2019, forecasting a delivery range of 895 to 905. Moreover, the group bucked the broader weak-guidance trend, forecasting earnings within the range of $19.90 and $20.10 per share this year.

The surged 2.2 percent, outperforming its peers thanks to tech stock gains. The index bounced more than 2.5 percent from an intraday low on Powell’s statements. Technically, the tech-heavy gauge is already above its downtrend line, but remains below the 100 and 200 DMAs.

The underperformed, climbing 0.88 percent. Perhaps U.S.-China trade talks taking place in Washington yesterday and today are increasing the outlook for U.S. exports, favoring multinationals’ stocks at the expense of domestic firms shares. The Fed-led dollar weakening is likely to have reinforced that outcome.

Overall, we believe the market reaction to the Fed’s apparent dovish turn is disproportionate. In our view, buzz words like “patient” and “flexible” are insubstantial. Fed Chief Powell reiterated monetary policy decisions remain squarely data-dependent, and pointed out that that the central bank has recently had insufficient data due to the partial government shutdown.

We see comments that the U.S.-China trade dispute has yet to yield any impact on the U.S. economy as the only substantial information to be gathered from yesterday’s statements. On a downbeat note, Powell warned that a second government shutdown might cause a loss of confidence. 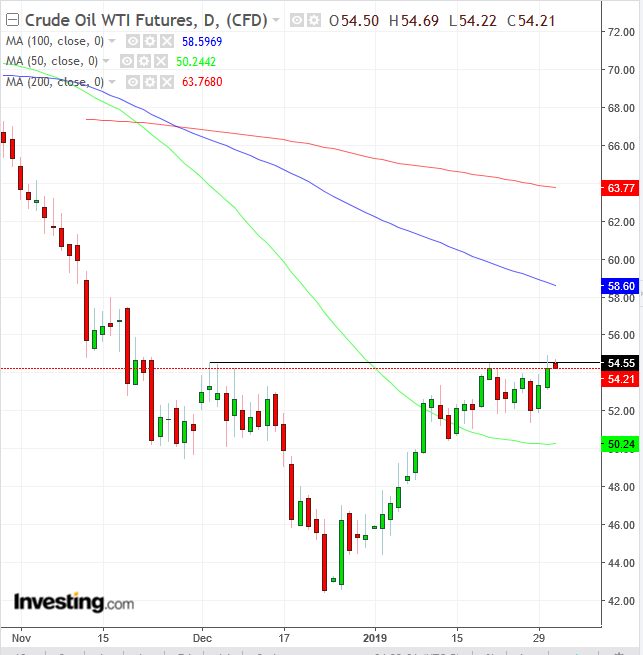 retreated from $54.69, struggling to break above the $55 level, a resistance since early December. However, the commodity remains on an overall upward trajectory as Saudi Arabia continues to cut supply to the U.S. A further possible headwind though stems from the ongoing Venezuelan crisis and its related U.S. sanctions, which some analysts warn could result in a sharp rise in oil prices in the near future.

In FX news, the edged higher even as the European Union and U.K. appeared on a collision path over Brexit.