Global stocks and futures on the , and tracked plunging yields this morning, as safe haven assets from Treasurys to and the Japanese leaped higher.

The was down 1.45% by late European morning, with miners and banks taking a hit on reports that China is ready to cut back the supply of rare metals in retaliation for the latest U.S. trade salvos.

In the earlier Asian session, regional stocks posted some heavy losses on U.S. President Donald Trump’s threats of a trade tariff escalation. After local investors had brushed off Trump’s comments on Tuesday, they seemed to catch up with the wider market sentiment as a lull in economic data gave them nothing to cling to.

South Korea’s underperformed, suffering the largest drop in two weeks (-1.25%), followed closely by Japan’s (-1.22%). Conversely, China’s (+0.16%) outperformed, continuing to disregard trade risk and resuming its congestion since May 7 after topping out.

Yesterday, U.S. equities tumbled to the lowest level since March, as falling yields exacerbated concerns about an economic slowdown, with the to curve inversion deepening to the widest level since 2007.

The (-0.84%) dropped with all sectors but (+0.44%). However, the fact that (-1.64%) underperformed is noteworthy. According to the recent market narrative, equities dropped due to an increasing outlook for a recession, which means defensive shares should have sealed the best performance—not the worst. 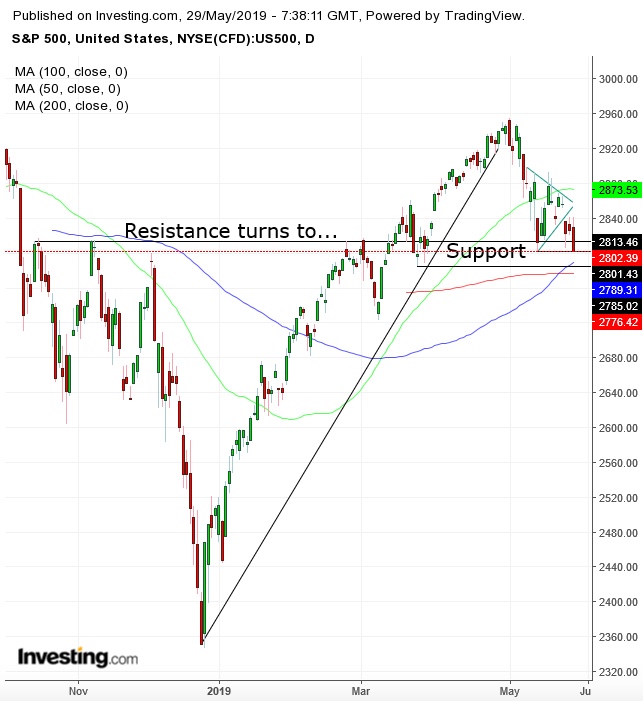 Technically, the index extended a downside breakout of a pennant—a continuation pattern, reaching the lowest closing price since March 25. However, it may find support at 2,800, a level we expected to be a resistance after the December bottom. This level has attracted a lot of interested parties since mid-October. We also find the 100 and 200 DMAs right below.

The (-0.93%) underperformed its peers, as stocks of multinational companies stand to lose the most from trade jitters. Technically, the price closed below the 200 DMA, as it develops the right shoulder of a H&S top. 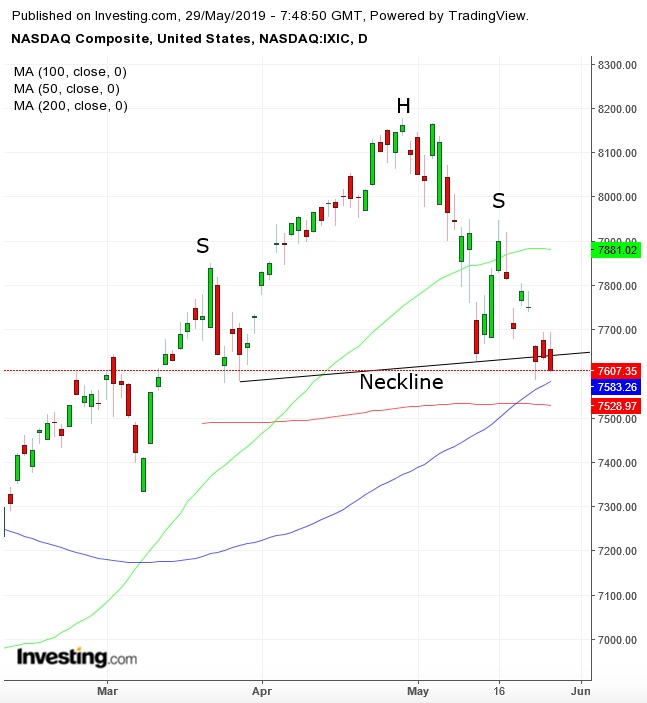 The (-0.39%) outperformed, suggesting some investors are taking advantage of the recent sharp selloff. Technically, however, the tech-heavy index may have completed a H&S top, though the 100 and 200 DMAs provide support above the key 7,500 level.

The slid 0.57%. It found support by the Feb. 7 and March 25 lows. However, it completed a pennant, bearish within a drop—with the 100 DMA drawing the lower boundary of the pattern. If the small-cap benchmark slips below the 1,494 level, it would complete a double-top pattern. 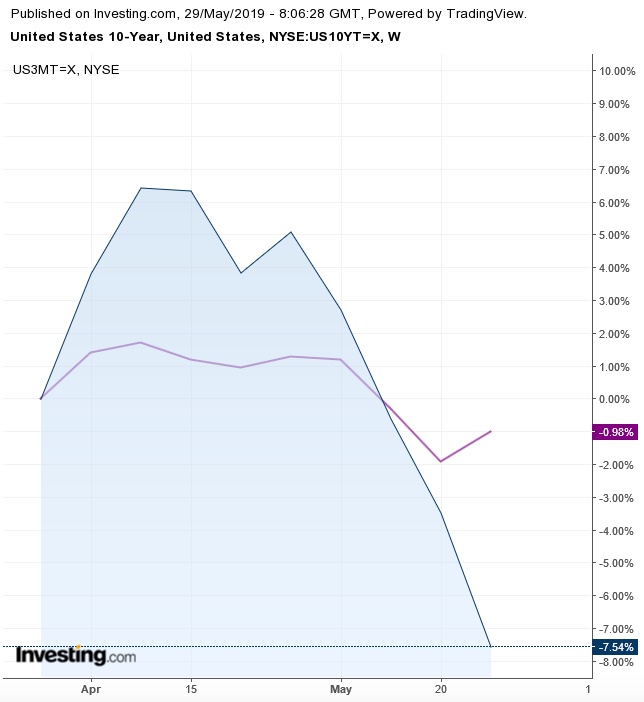 Ten-year yields reached the lowest level since Sep. 25, 2017, pushing the curve with 3-month yields to the widest inversion since 2007. This is the most watched yield ratio as it provides the closest proxy of a recession—which it historically precedes by 18 months.

Government bond yields also suffered globally, with benchmark yields sliding to the lowest level since 2016 , to a record low and below the central bank’s policy rate .

In commodities, tumbled as signals, from Trump, of an opening on possible negotiations with Iran added to trade and growth concerns to drag prices lower, outweighing the effect of production cuts and supply headwinds.