Futures on the , and NASDAQ 100 are pointing to a lower open, ahead of a week filled with earnings results from key tech companies, including four of the world’s five most valuable technology firms—Apple (NASDAQ:) (NASDAQ:AAPL), Amazon (NASDAQ:)(NASDAQ:AMZN), Microsoft (NASDAQ:) (NASDAQ:MSFT) and Facebook (NASDAQ:) (NASDAQ:FB). Big tech firms have strongly impacted the recent market performance, making this week’s reports a potential catalyst.

Last quarter’s warning of falling profits aired by numerous Wall Street companies struck a chord with investors. Although, General Motors (NYSE:) (NYSE:GM) and some major banks have turned those prospects around this quarter, early this month Apple kicked off tech earnings season by signaling it will miss its revenue target for Q4 2018. The announcement spurred a selloff. Later, Intel (NASDAQ:)’s (NASDAQ:INTC) earnings miss added fuel to the fire, with interim CEO Bob Swan citing heightened trade and macro concerns, especially in China. The company, which is the world’s second-largest semiconductor chipmaker, updated its list of risk factors to include the possibility of a “recession or slowing growth.”

If ever there was a time when continued soft guidance and doom-and-gloom economic forecasts could prompt stock prices to fall hard, it would be now: the post-Christmas bounce has stopped at a technical convergence.

Meanwhile, European shares also opened lower this morning and then slipped further ahead of a crucial round of U.S.-China trade negotiations—starting in Washington on Wednesday—as the outlook for a resolution remains cloudy. 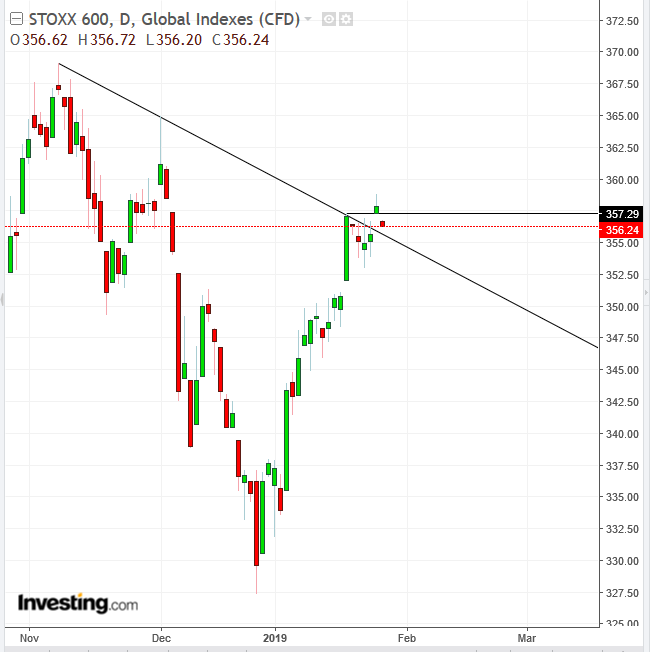 Investors tried to gauge whether the retrenchment seen on the today marked just a temporary pause or a reversal—a legitimate doubt, considering the price is at a trend intersection. It gapped up Friday above a downtrend line since November 8, only to gap down today. The emerging picture is an evening star pattern, with the downtrend line making it all the more poignant, as investors up the ante on both sides of the supply-demand equation.

Earlier, during the Asian session, most stocks ended a choppy session lower. At first, regional shares followed Wall Street stocks higher as investor optimism was boosted by the interim agreement reached by lawmakers to reopen the U.S. government. However, later in the session the focus shifted to looming U.S.-China trade talks, prompting investors to take on a more defensive stance.

While Hong Kong’s rebounded to a 0.03 percent gain, China’s benchmark lost 0.18 percent. If investors expected this week’s meeting to yield a diplomatic breakthrough, they would have bought what would be considered very cheap stocks, which since the start of the trade war have lost more than a quarter of their value. 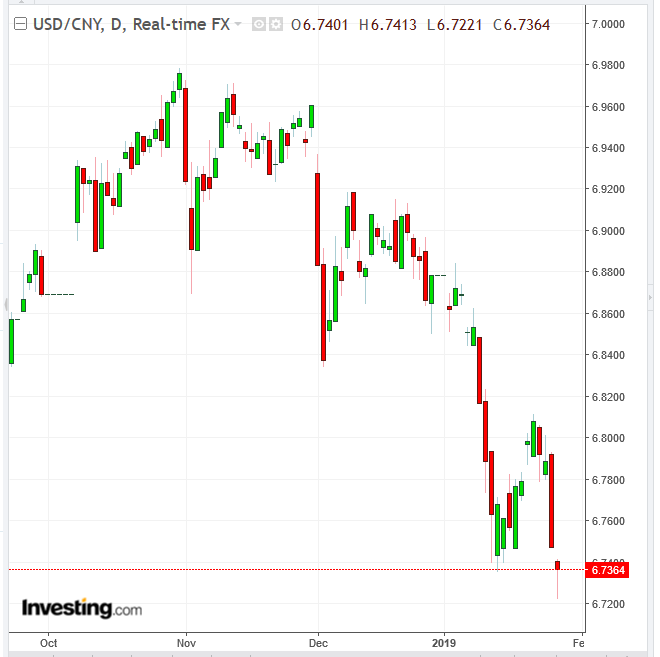 U.S. Treasury Secretary Steven Mnuchin, who has openly criticized the yuan‘s weakness in the past, said high-level talks this week will include discussions about China’s currency policy—we have written extensively about the yuan’s weakening during the recent U.S.-Sino trade talks. In recent days, however, positive sentiment toward the negotiations has lifted the value of the renminbi against the dollar. Today though the pair appears to have found support, as the price rebounded from an early plunge to the previous trough from two weeks ago, forming a hammer. 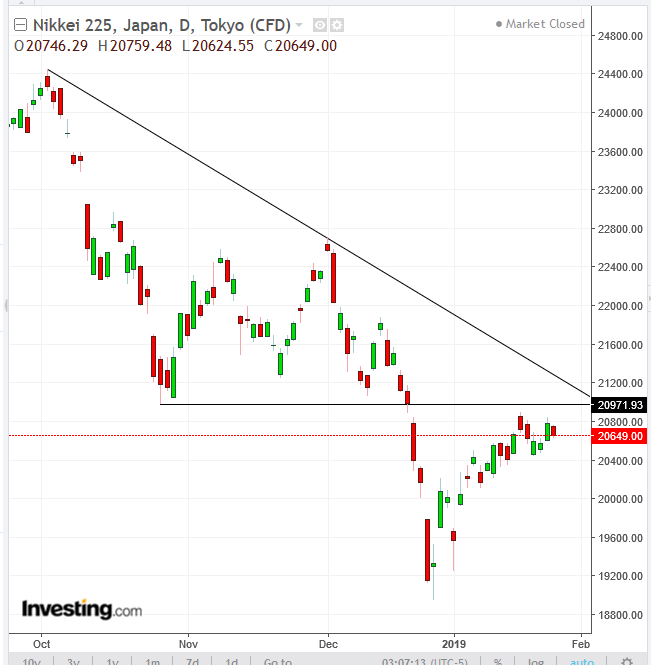 Meanwhile, Japan’s dropped 0.60 percent, underperforming its peers. The index met with overwhelming supply upon a second attempt in a week to contend with the 21,000 level, where the downtrend line since October 2 meets with a previous support from October 26 till December 19, constructing a descending channel. The pattern projects supply outpacing demand.

South Korea’s was largely flat while Australian markets were closed for holiday.

Facing mounting political pressure, U.S. President Donald Trump agreed to temporarily end a 35-day-old partial government shutdown on Friday, despite failing to obtain the $5.7 billion funds he had demanded from Congress for a border wall with Mexico. 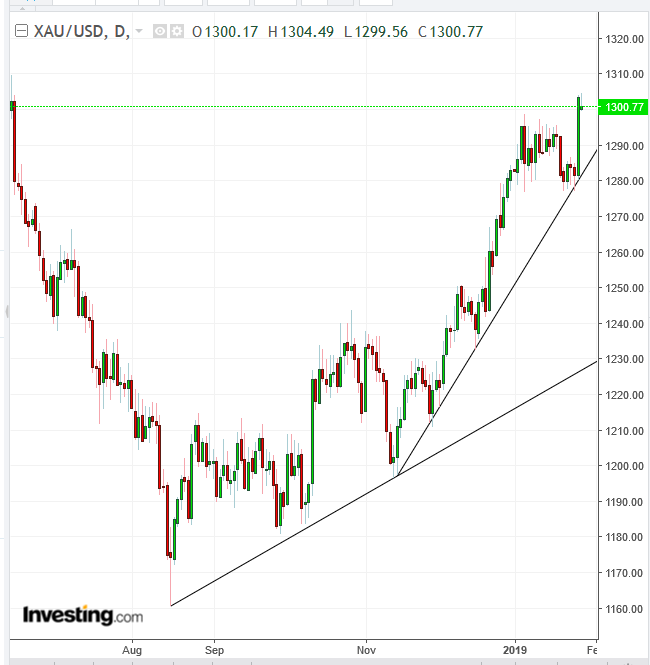 Typical risk-off took hold of the market, with traders buying Treasurys, the yen and Swiss franc. Gold initially bucked the trend, perhaps falling on dollar strength. The USD gained ground despite expectations the Fed will leave interest rates unchangedin this week’s policy meeting. Perhaps, the greenback benefited from increased demand for Treasurys. Gold may also need a correction, after reaching a 7-month high, including a sudden acceleration in mid November. Both gold and the buck reversed their course today.